Grotesque masks and bright costumes, prayer flags waving in the breeze, multi-colored butter sculptures, and thousands of butter lamps lighting up the night are all key parts of Losar, the Tibetan New Year festival. Over a couple of weeks, the people of Tibet (and some from Nepal, Bhutan, and India) take part in ancient ceremonies that honor the gods and spread love and blessings to those dear to them for the new year ahead.

What is Losar and how did it start?

Losar is a 15-day New Year celebration observed by Tibetans (as well as some people from Nepal, Bhutan, and India) around the world. The festival’s main events occur on the first three days, followed by informal gatherings with family and friends and culminating on the 15th day with the Butter Lamp Festival.

Losar began as a winter incense-burning ceremony of the indigenous Bon religion, which predates the arrival of Buddhism in the country. When Buddhism made its way to Tibet, the holiday became a way to celebrate the new year and was moved to coincide roughly with Chinese New Year. 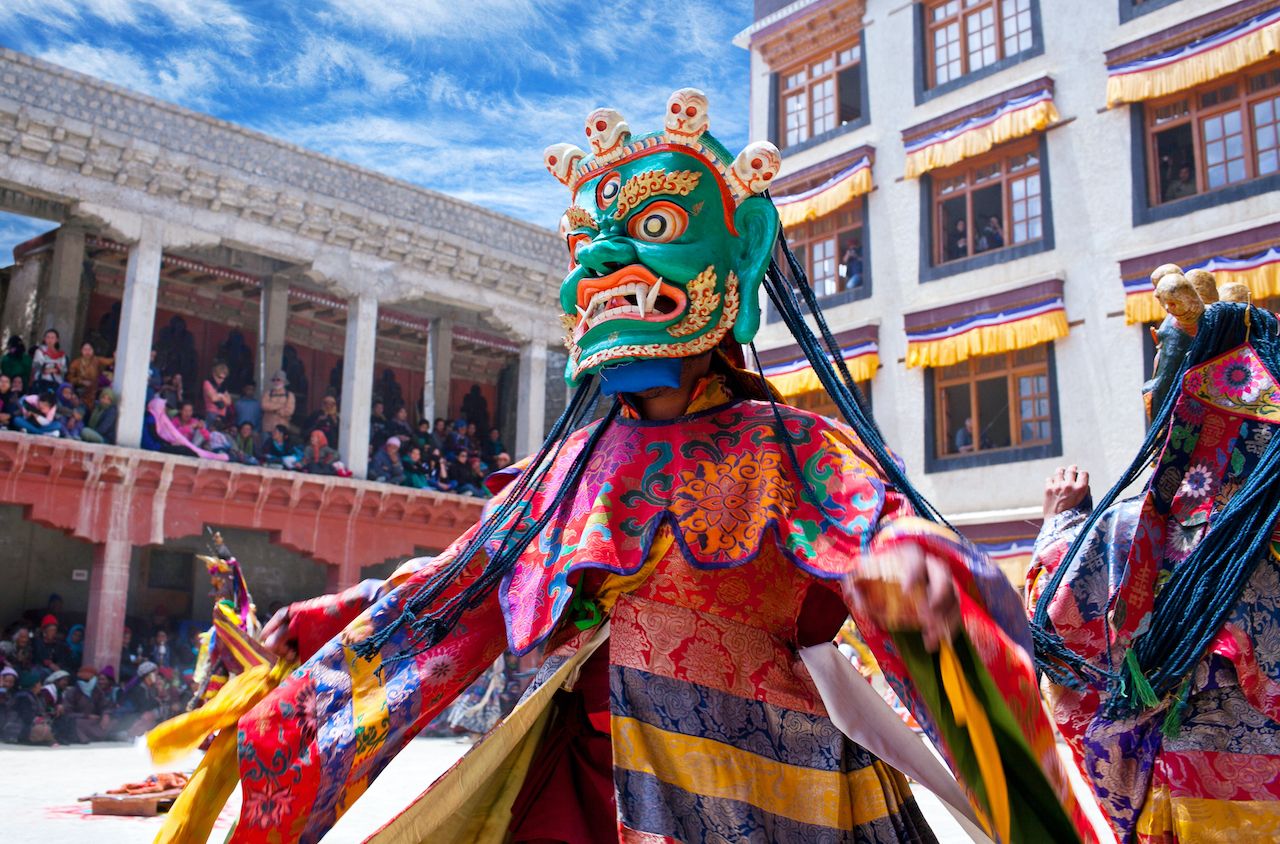 During Gutor (the two days leading up to the new year), families prepare by cleaning their homes to sweep away the previous year’s negativity and get ready to start anew. They may also light up torches and firecrackers to scare off demons, and visit monasteries to send their respects to lamas. In another show of banishing malevolent spirits, monks don elaborate folk costumes and frightening masks to perform plays in temple courtyards. These performances, also known as cham, are complete with dancing, chanting, loud horns, booming drums, and crashing cymbals as the monks act out scenes of good defeating evil.

A fun New Year’s Eve tradition is eating guthuk, a type of dumpling soup. The soup contains as many dumplings as there are people eating, so each person around the table gets one. Dumplings are stuffed with various fillings, each bearing different meanings. It’s a lighthearted game of divination. For example, if you find white-colored fillings in your dumpling, good luck is in your future. If you bite into a chili, it means you have a sharp tongue.

Throughout the festival, it’s also popular for Tibetans to enjoy yak butter tea, khapsé (deep-fried pastry twists), and homemade chang (a warming alcoholic drink made of barley, rice, or millet). 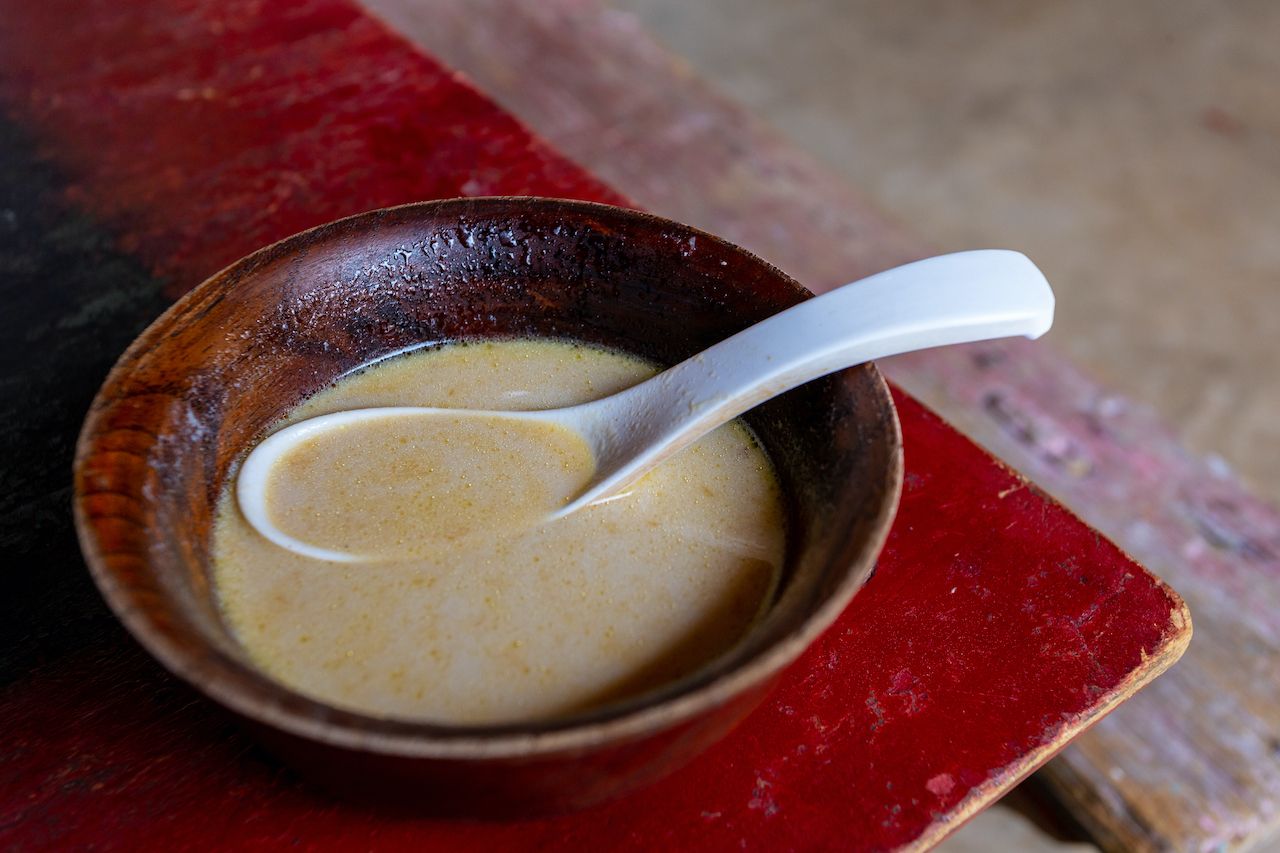 On the first day of Losar, Tibetans rise early, put on new or freshly washed clothes, and spend the day at home with their immediate family. Housewives wake up especially early to make barley wine and carry on the tradition of collecting water from the nearest well or river. As the first of the year, this water is seen as exceptionally pure, and it’s said that the first family to fetch it will enjoy luck for the coming year. On this day, Tibetan families also worship at their household altars, exchange gifts, and feast together.

The second day is the time to visit friends and relatives. Upon entering a home, guests approach the chemar bo that the host has set up on their altar. A chemar bo is a wooden box split into two sections with chemar (a mixture of roasted barley flour and butter) in one half and roasted barley grains in the other. Butter sculptures and other decorations color the box. Guests take a pinch of the chemar and offer blessings of happiness to the host with a friendly “Tashi delek!” (“Happy New Year!”) They then wave their hands three times and toss the chemar in the air. After, hosts and guests spend time together socializing, eating, and playing games. 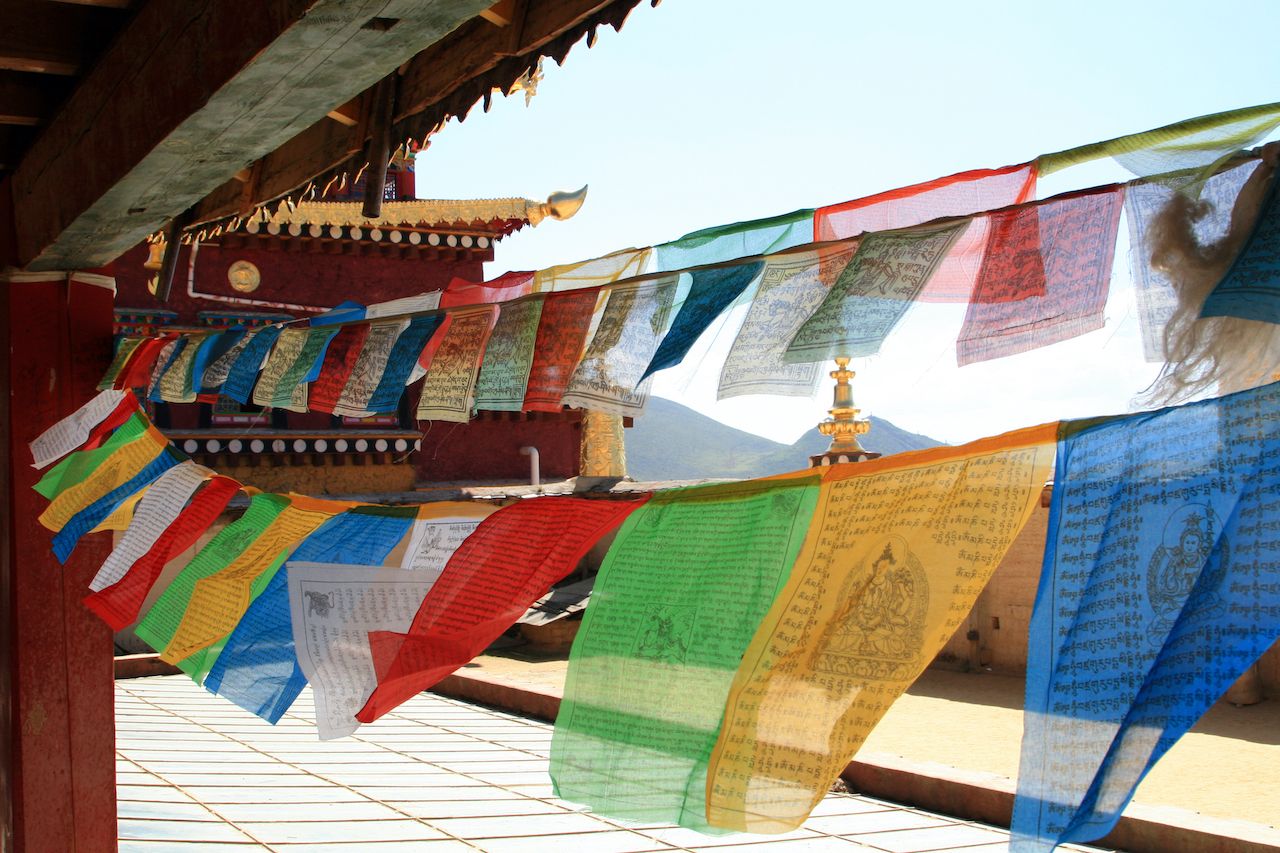 The third day of Losar is reserved for worship and prayer, paying respect and spreading blessings not only to deities and lamas but also neighbors and people in general. At home, old prayer flags are replaced with new ones. These flags are colorful squares of cloth bearing written prayers and mantras. Tibetans believe that the prayers can be carried through the wind, and anyone who crosses paths with this wind becomes blessed with the intentions it holds. The smell of herbal incense is strong on the third day as it is traditional to perform lhasang (incense offering) ceremonies, which purify the air of negative energy and invite higher beings down to earth, bringing abundant blessings with them. After these ceremonies, people recite chants and splash tsampa (roasted barley flour) into the air, believed to release prosperity and health into the world. 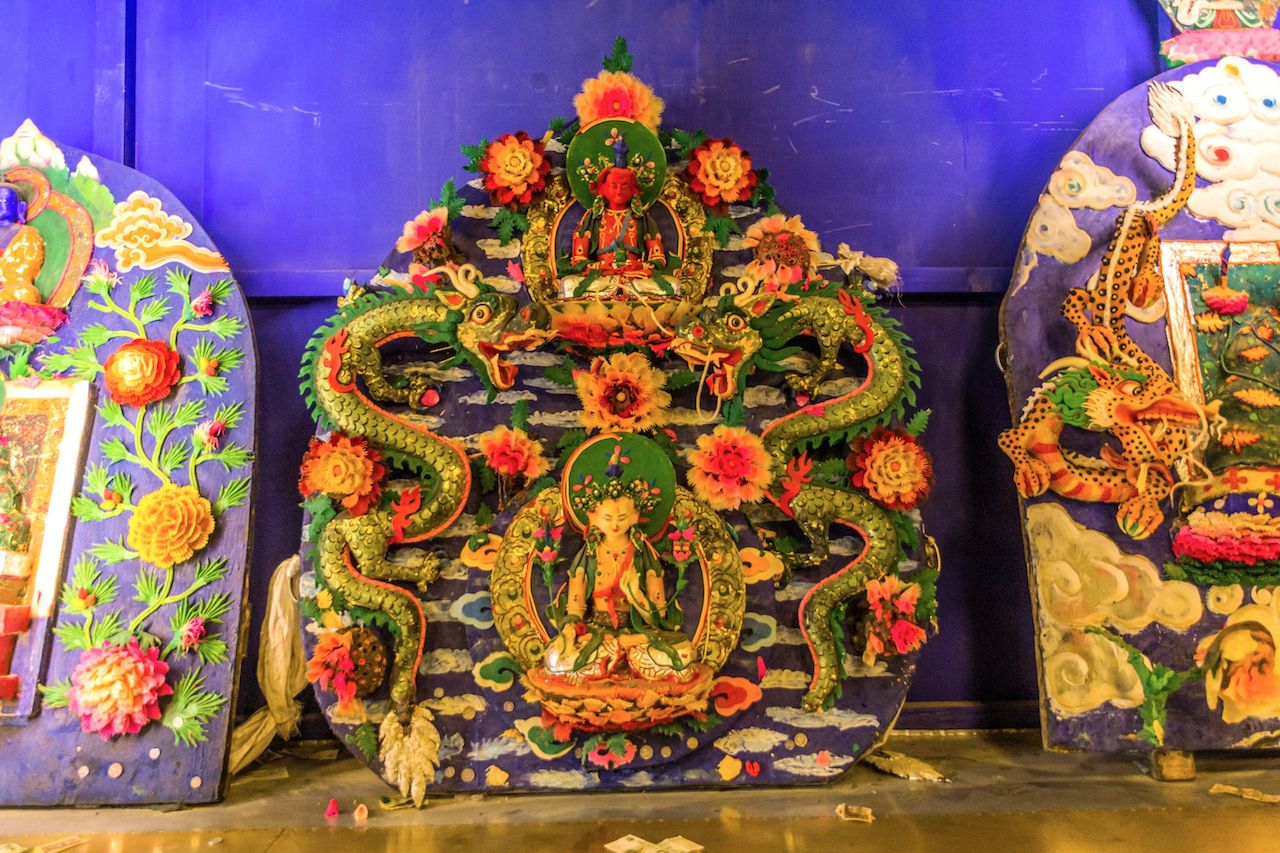 Perhaps the most eye-catching aspect of Losar is the hundreds of colorful butter sculptures that decorate home altars and monasteries as offerings. Made primarily by monks and nuns, these sculptures vary in size from a few short centimeters to several towering feet, and they can get very intricate. The sculptures are made of pigments mixed with dri (or female yak butter), which is easy to obtain and malleable. But as malleable as the material is, this unique artwork is not easy to make and requires a lot of skill, practice, and devotion. Cold temperatures are needed to keep the butter from melting as artists work with the material by hand.

The butter sculptures, or tormas, can be shaped into anything and vary in shapes. Some common figures include Buddha, flowers, animals, and other natural and religious symbols.

Butter sculptures have become a sacred art and a unique way to adorn altars. They also serve as a reminder of the Buddhist philosophy that nothing is permanent. After the Butter Lamp Festival, the sculptures are often taken apart and fed to animals. 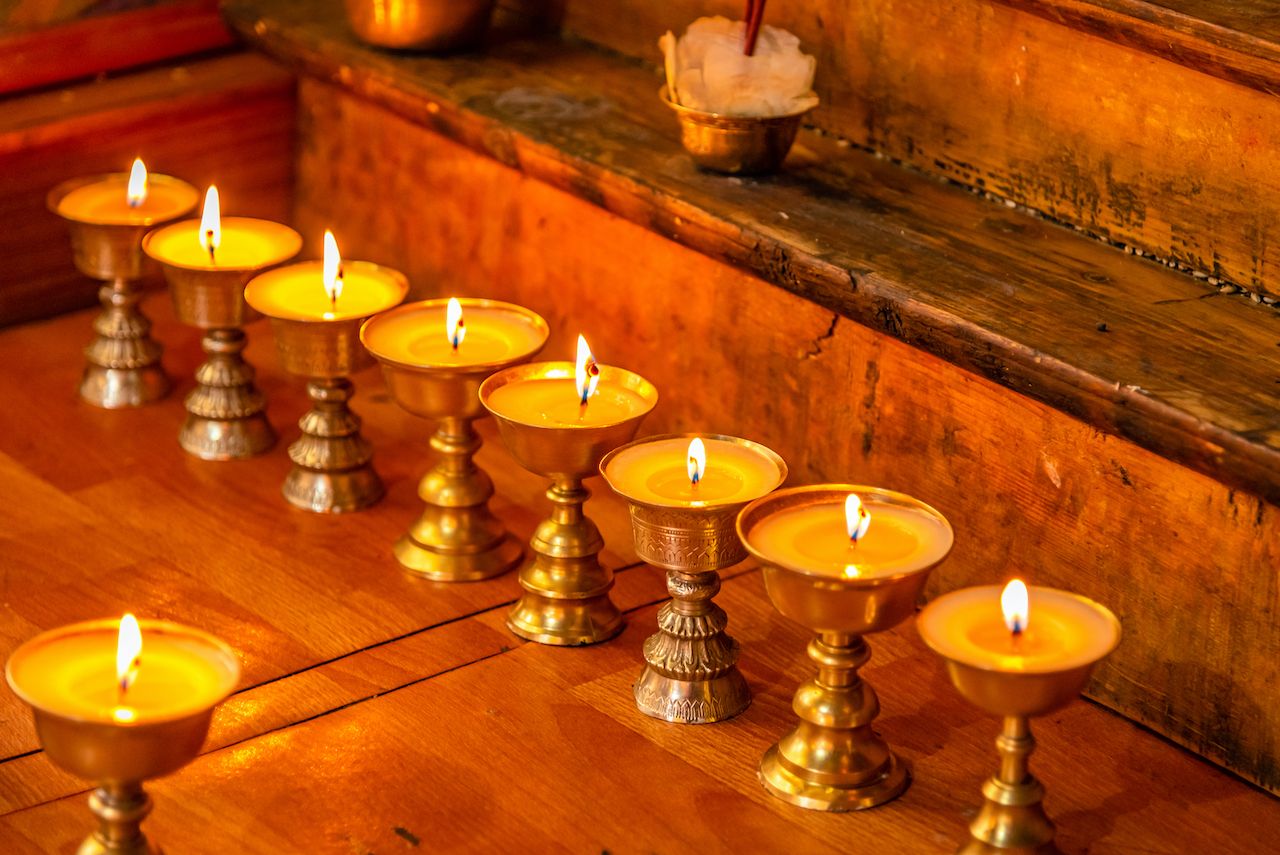 Along with the sculptures, lamps made of clarified yak butter are lit on the night of the festival’s final day. This is the 15th night of the New Year celebrations, a night when the full moon is always shining. The Butter Lamp Festival, or Chunga Choepa, is one of four Buddhist festivals that honor major events in the Buddha’s life. This one commemorates the Buddha’s victory over his opponents in a great debate and marks the end of Losar. It’s a dazzling display of twinkling lanterns that range in size and shape.

LanguagesHow To Say ‘Cheers’ and ‘Happy New Year’ in 30 Countries
Tagged
Holidays Religion Nepal
What did you think of this story?
Meh
Good
Awesome