When you think of traveling to Italy you might think about Florence, Venice, or Rome. These destinations are beloved for good reason, but their popularity can also mean crowds and expense. If you’re willing to step beyond these famed cities, Italy has so much more to offer. If you opt to visit Trieste, it won’t just be quieter and more relaxing than Florence. Trieste offers its own unique vibe, given its easterly location, rich history, impressive architecture, and seaside allure. Here’s why you should consider stopping there on your next European vacation.

Trieste is closer to the Balkans than to Venice. 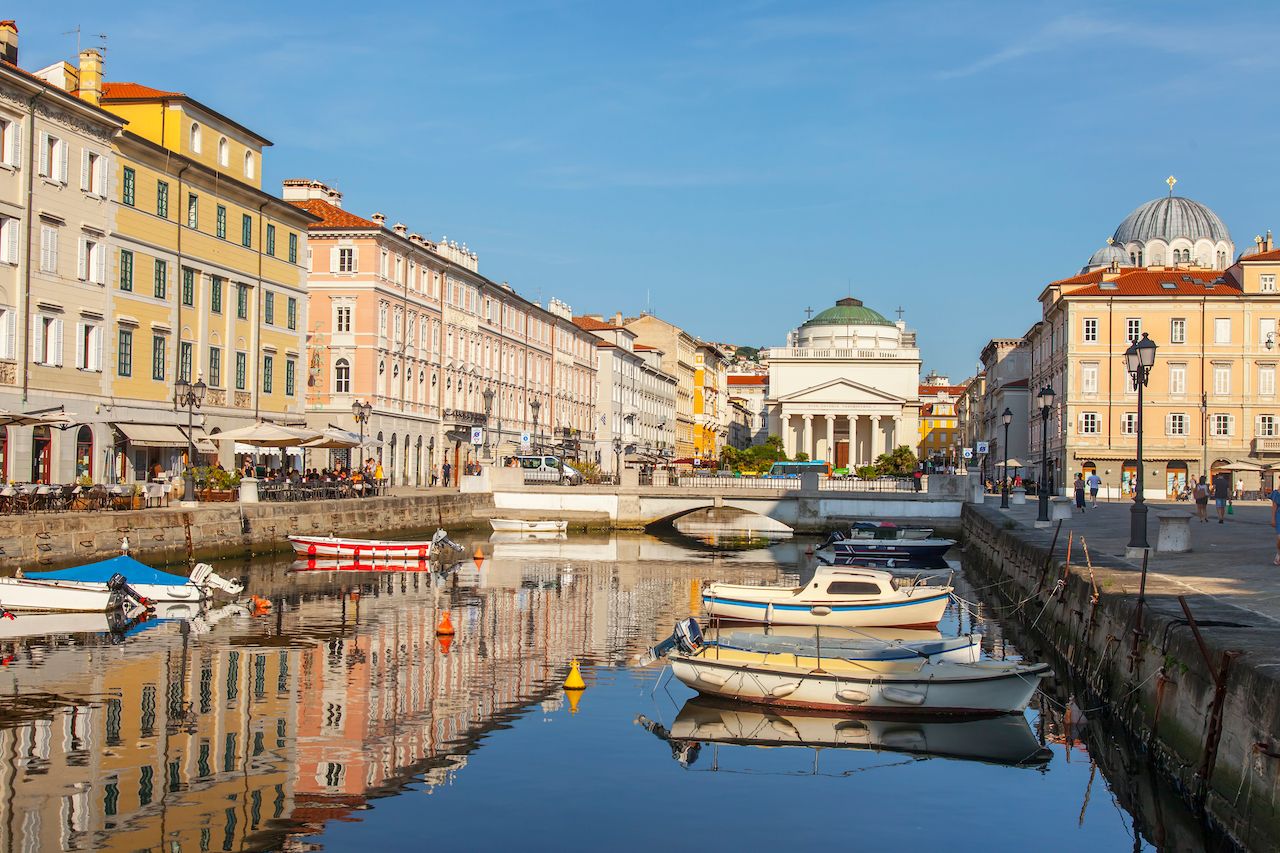 Located on the narrow sliver of Italy that stretches between Slovenia and the Adriatic Sea, Trieste is closer to Slovenia and Croatia than to Venice, and is also very near Austria. Its far-flung location means it’s less expensive than many of Italy’s more touristy cities but it’s also behind Trieste’s unique history.

Trieste was a major seaport for the Austro-Hungarian Empire until the end of World War I, when it became a city-state for roughly 35 years before Italy took possession of it. However, it still bears many signs of Austrian influence, including the Castello di Miramare, a thriving Austrian quarter containing architecture that resembles Vienna’s and quality Austrian cuisine. You’ll find schnitzel here that’s every bit as good as what’s made further north, and can also sample traditional Austrian dishes that have been remade in the Italian image at spots like Trattoria Da Giovanni.

You can walk to easily accessible Roman ruins. 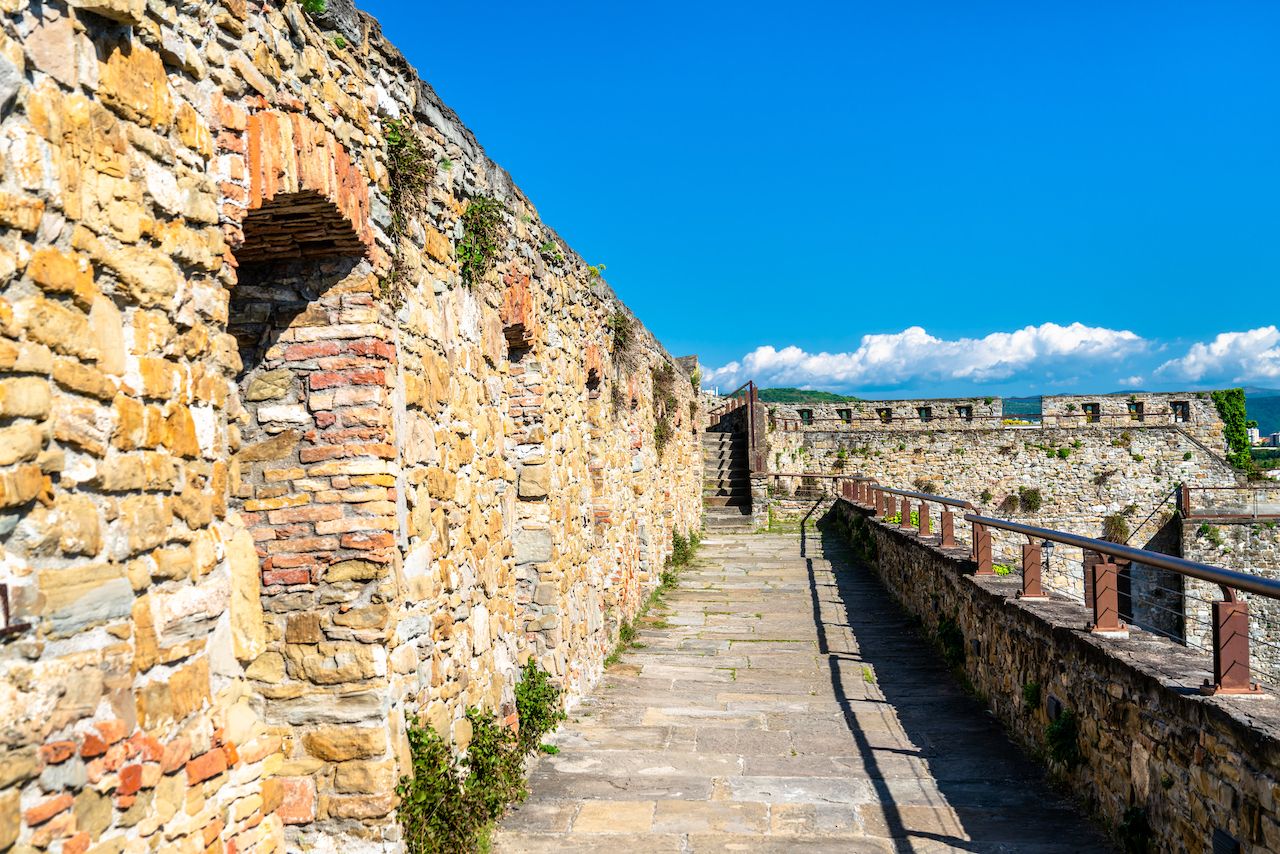 In Trieste, you can reach out and touch history; you don’t need to enter a museum to experience it. Brave the steps and steep paths up San Giusto Hill, and you won’t just experience the views of the city and the Adriatic Sea beyond. You’ll also have the opportunity to visit the San Giusto Castle and Cathedral, peek at the baptismal font next door — which dates back to the ninth century — and wander through a private garden littered with remnants of Roman art and architecture. Some of the old road signs and grave markers still bear legible lettering in Latin, and everything is available for you to reach out and touch.

Like many Italian cities, Trieste has grown around the scattered remains of ancient Roman ruins. The Teatro Romano, or Roman Theater, is an amphitheater that resembles Rome’s Colosseum, albeit smaller. Still, it occupies most of the city block across from the Trieste Police Academy, stretching uphill toward a row of modern-looking apartment buildings. You can’t enter the Teatro Romano the way you can enter the Colosseum, but you can stand close enough to admire the precision with which its steps were carved and to speculate about what use the massive cement block tables just inside the railing might have served.

The nearby Arco di Riccardo, or Richard’s Arch, is an old Roman gate built into the side of an apartment building in a quiet little piazza on the side of San Giusto Hill. You can stand beneath Richard’s Arch and press your hands to it. Revel in how mind-blowing it is that something built in the first century AD is still standing, and appreciate the freedom to admire it up close and uninterrupted. Both sites are easy to find and accessible on foot, which is the preferable way to move about the central part of town as the road system is comprised of one-way streets that sometimes end abruptly or wind around until they merge with another street — seemingly taking you farther from your destination than where you started. In fact, while it would require nearly an entire neighborhood loop around the Arco di Riccardo to drive there from the Teatro Romano, you can walk in less than five minutes.

You can admire and play in the Adriatic Sea. 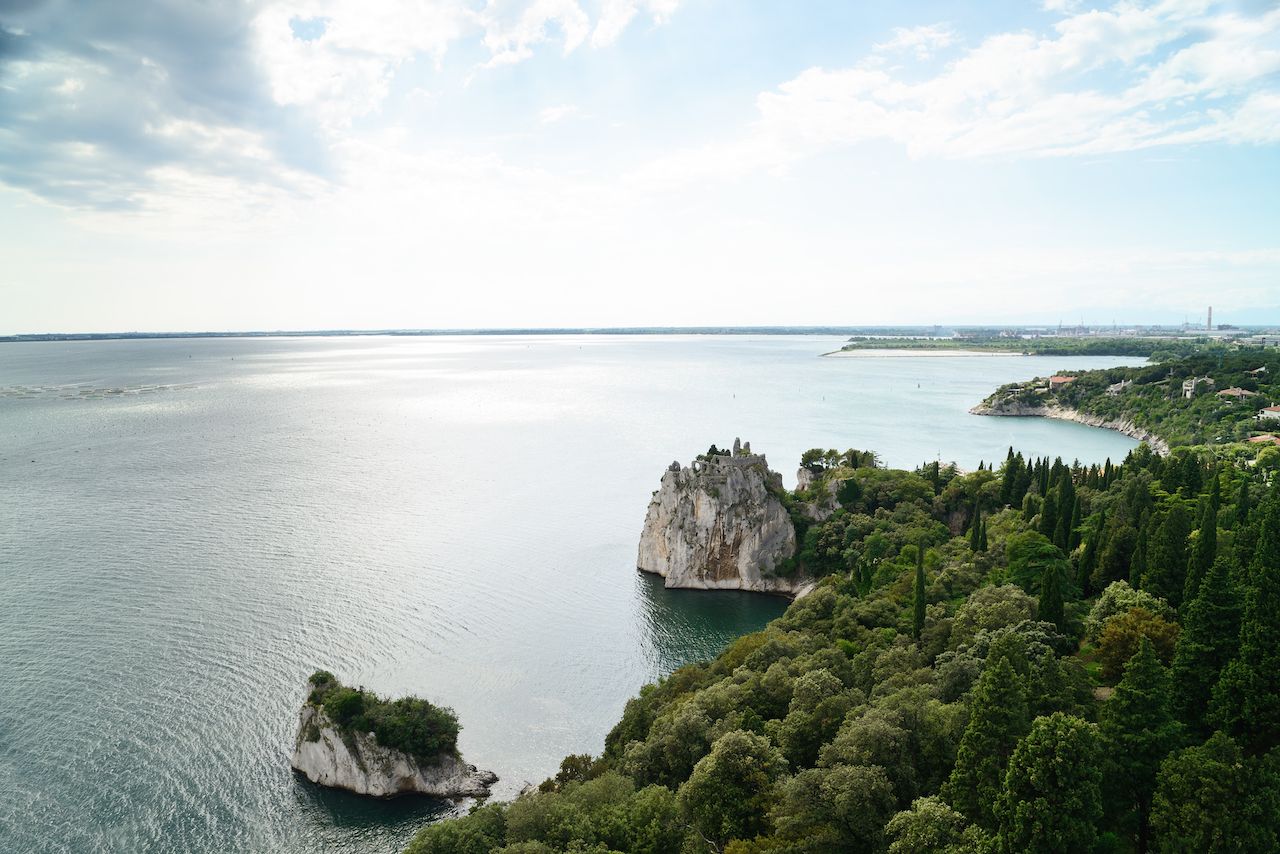 Many of Trieste’s foreign visitors arrive by cruise ship, but you can still appreciate its proximity to the Adriatic Sea without ever setting foot on a boat. One of the best places to do so is the Piazza Unita d’Italia, or Unity of Italy Square, which is thought to be the largest seaside square in Europe — according to the Triestiens, at least. The stately, ornate government buildings that surround it on three sides deserve a good 20 minutes of attention, but it’s the glimmering, blue water spreading out into the distance that will really draw you in. Walk to the end of one of the several nearby piers to feel the seabreeze on your face. Depending on which direction you stand, you’ll see either a spectacular view of the sea or of the city spreading up into the hillside.

The Adriatic can be frequently glimpsed between buildings and through trees from many points in town, but the Barcola area just north of town is where locals head for direct exposure to the ocean. This maritime neighborhood is a bit more removed from the city’s hustle and bustle. You can hang out on the cement beach area under the pine trees to swim, sunbathe, or just take a lovely, shaded seaside stroll. 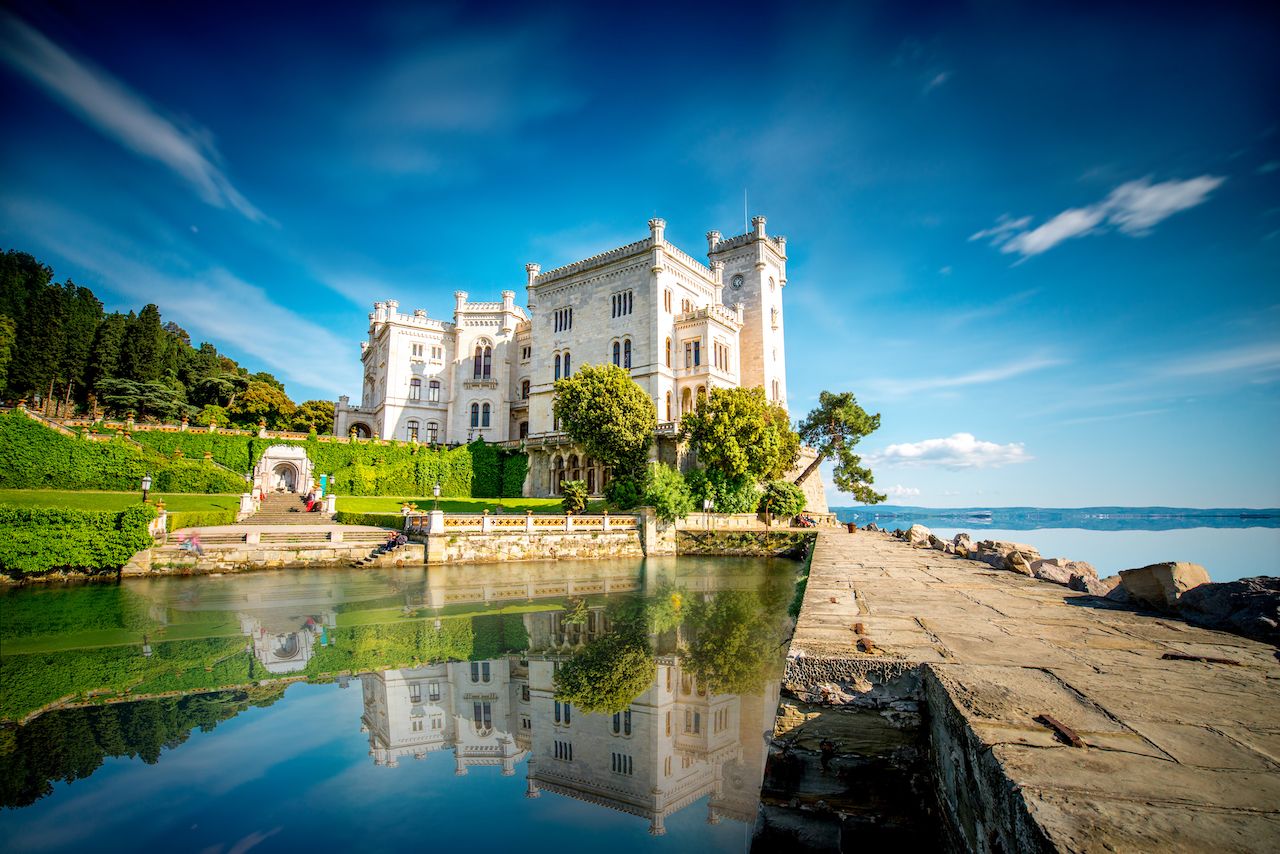 Originally built for the Austrian Archduke Maximilian in the 19th century, the Castello di Miramare is located on a once-rocky promontory about 20 minutes outside Trieste by bus. Determined to turn the castle into his family’s summer retreat, the Archduke transformed the promontory into a series of beautiful gardens and fountains surrounding his gleaming white castle which faced out to sea. Maximilian was killed in Mexico before the Castello di Miramare could see much use. Unfortunate, but because he wasn’t around much the castle remains in pristine condition, filled with many of the same mid-19th century furniture, artwork, and books that once belonged to the Archduke. There’s a self-guided tour of the castle available that’s both informative and affordable, as well as plenty of parkland and gardens to explore.

Walking paths crisscross the entirety of the grounds, detouring past battlements on which the original 19th century canons sit, the smaller castle where the Archduke and Duchess lived while the Castello di Miramare was being built, and the rundown stone chapel that once had ties to a Capuchin Monastery. As you approach the castle, pause to cool off in the Japanese-style garden or stop to admire the flowers lining the steps that descend toward the sea. A sphinx statue that dates back to the second or third century BC, another piece of history you can personally interact with, stands guard near the end of one of the docks, which are also all open to visitors. Plus, the castle’s balconies offer up some of the best views of the Adriatic in or outside of Trieste and are accessible whether you pay for the tour or not.

You can go deep underground. 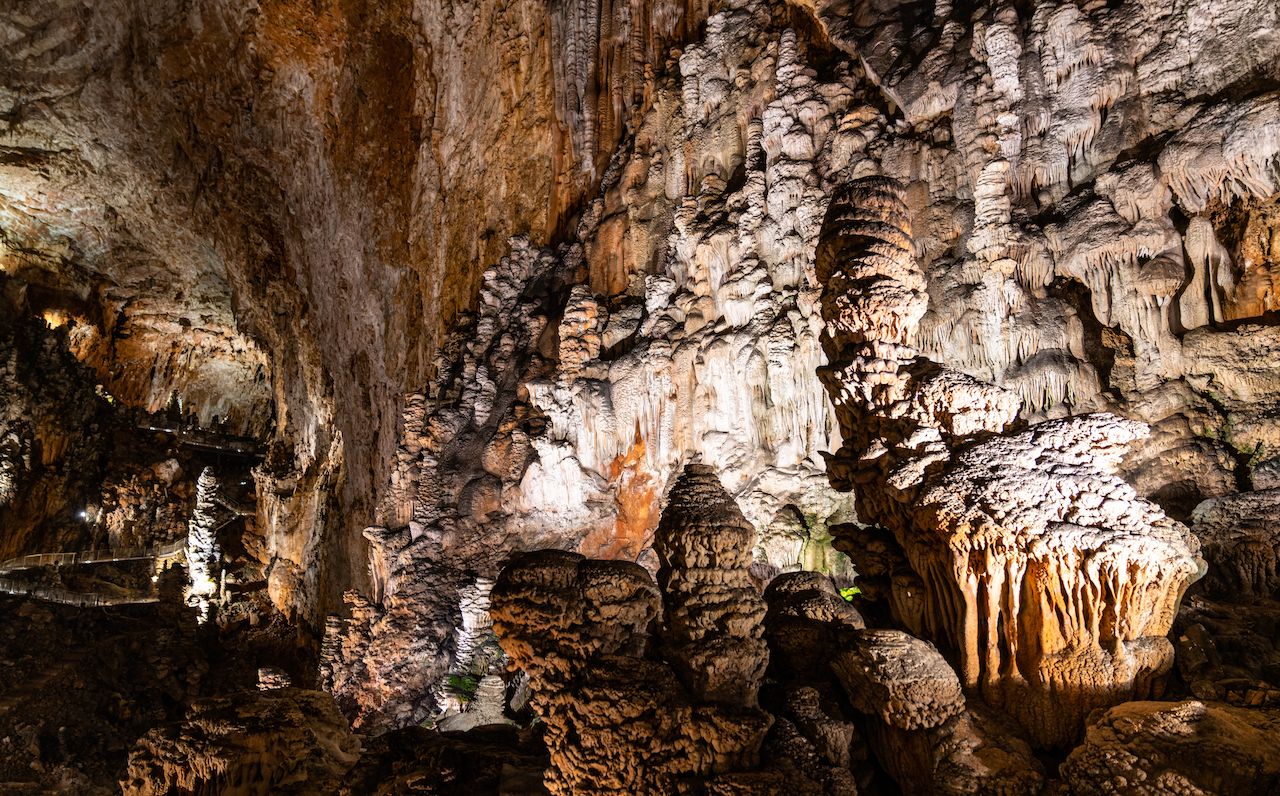 The Grotta Gigante is one of the world’s largest caves accessible to tourists. It’s only a half hour from Trieste by bus, followed by an easy 10-minute walk from the bus stop. First explored in 1840, the cave is 351 feet high, 213 feet wide, and 430 feet long, and so far underground that scientists working down there can accurately track seismic activity because there’s almost no seismic interference from the world above.

The cave costs 12 euros (about $13.30) per adult. A comprehensive, informative visitor’s center and regular tours offered in four different languages increase its accessibility, and the stairs that descend deep into the underground chasm are well-lit and well-maintained. The tour discusses how the cave formed (hint: plenty of both water and time) along with what sort of research is currently being done and what types of challenges scientists face in terms of protecting and preserving its unique ecosystem. But even if you’re not too interested in the science of speleology, the novelty of heading so far underground to take in the cave’s rock formations, stalactites, and stalagmites make it well worth a visit. One stalagmite is thought to be over 200,000 years old.

It’s tougher to get to, but that’s part of the charm. 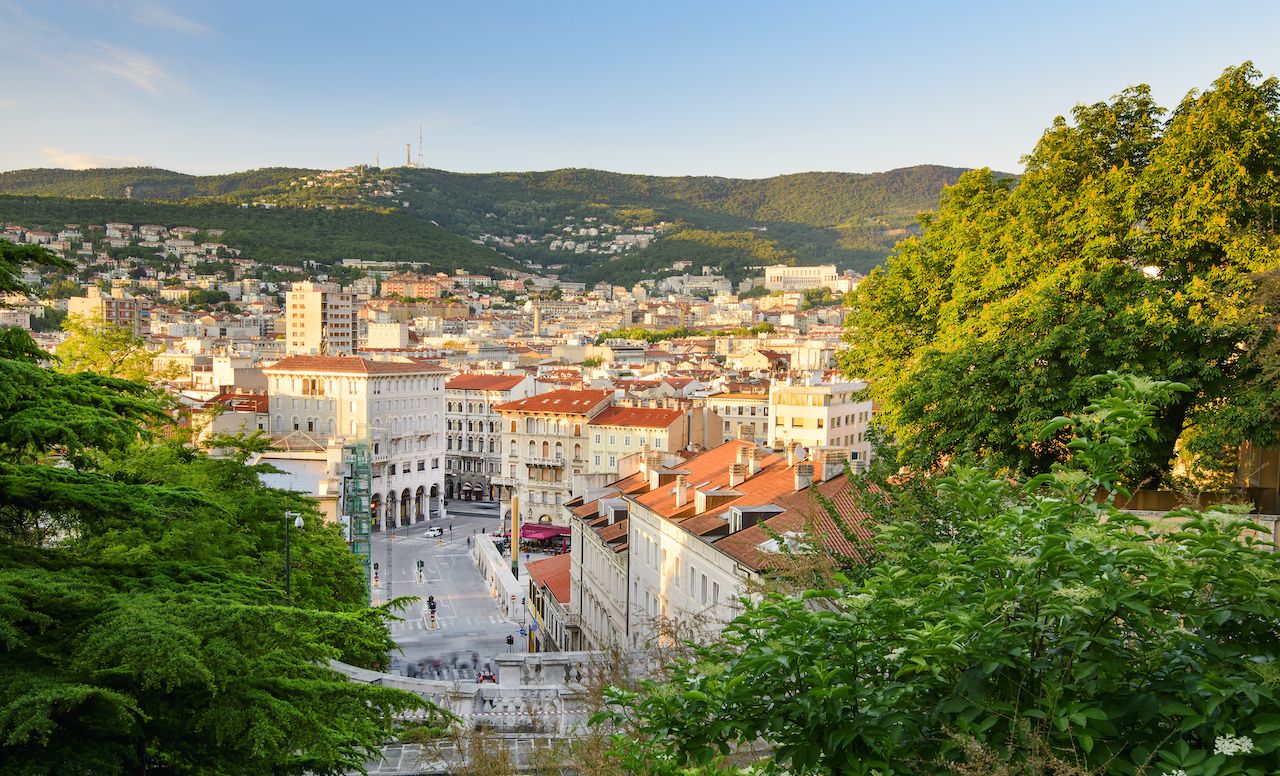 It’s admittedly harder to fly into Trieste than to other Italian cities, regardless of where you’re coming from. Fortunately, Trieste is only two hours from Venice by train, and multiple trains travel between the two places every day. Once onboard the train, relax and enjoy the obscenely photogenic Italian countryside and the increasingly frequent glimpses of the Adriatic as the train cruises through the hills.

Certain cruise ships also dock in Trieste, and many of those cruise ships even begin their voyages there. The volume of tourists they disgorge sounds intimidating if you’ve already found your way into the city, but unlike larger, more popular seaports like Venice, cruise ships only dock in Trieste one or two days per week.

Choose to visit one of the many sites outside the city on those days — even hiking in the nearby Slovenian forests — and by the time you return in the mid-afternoon, the crowds will have mostly dispersed and you can resume your wandering in the city’s tree-lined pedestrian paths, window shop in its beautiful piazzas, or sit down at a cafe in peace.