At a time when the major northern Italian pre-alpine lakes — Maggiore, Como, and Garda — are overrun with tourists and VIPs like George Clooney, nearby Lake Orta is experiencing quite the opposite. This lake is starved for attention, though that’s probably because locals are working hard to keep it all to themselves. Nineteenth-century French novelist Honoré de Balzac wrote about Orta, “The world that the traveler has lately viewed is here in miniature, modest and pure.” His words still ring true. At Lake Orta, a mere two hours outside of Milan, less is still more — even two centuries later. 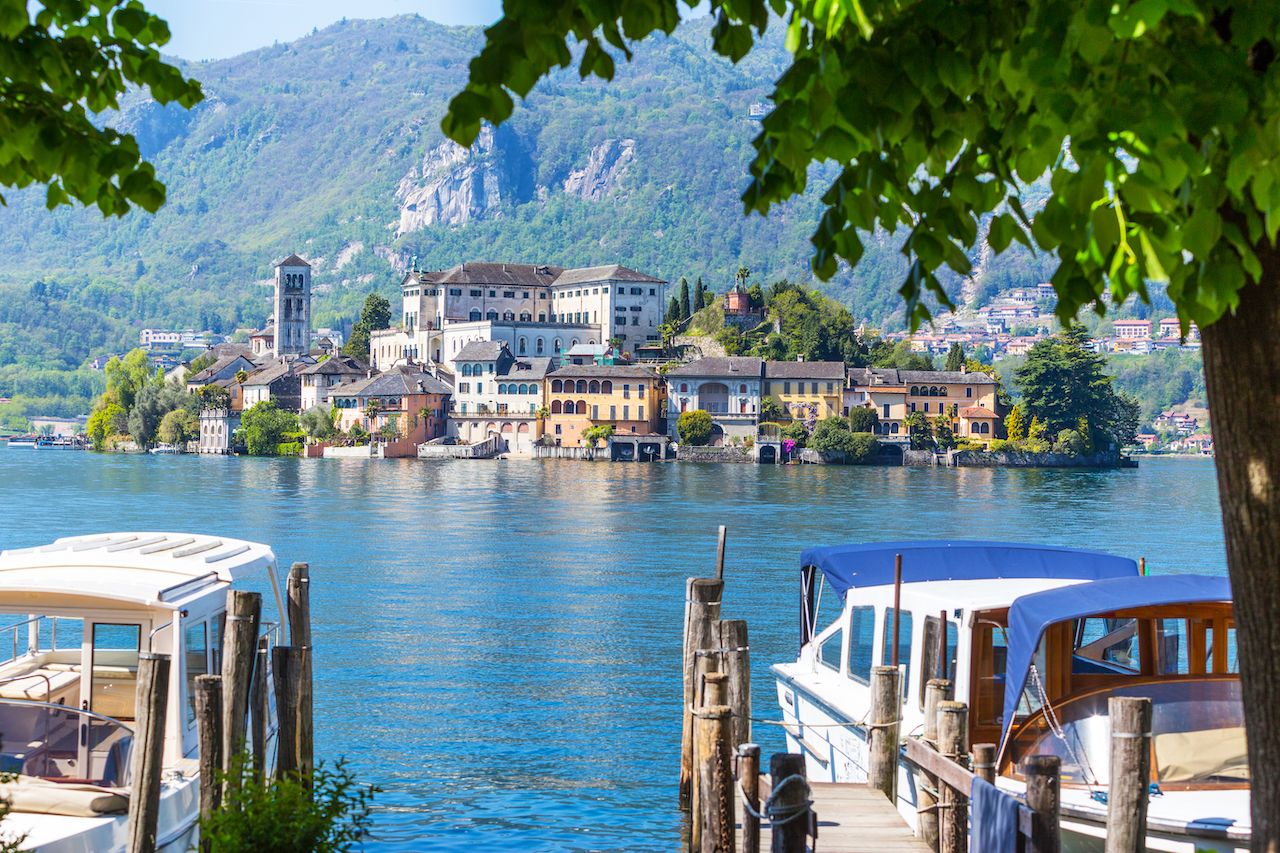 Lake Orta has been unjustly overshadowed for long as tourists have flocked to the hills of northern Italy: in sumptuousness by nearby Lake Maggiore, with its Borromean Isles’ manicured gardens and affluent Stresa; in size by Lake Garda, Italy’s biggest lake despite Maggiore’s deceptive name; and in literature by Alessandro Manzoni’s, “That branch of Lake Como,” the famous beginning to The Betrothed that all Italian students learn by heart, and which they often unconsciously default to when thinking of lakes later in life.

Less crowded, less costly, and less extensive, Lake Orta (aka Lake Cusio) is equally worthy if you know what to look for. It’s a little, unspoiled sapphire set amid the surrounding woods, and still one of Piedmont’s best kept secrets. This lake is also quite unique from a geographical viewpoint since its only outflow, Nigoglia, is the sole torrent in Italy that runs northwards. You’ll be seduced by its simplicity and intimacy, as well as by the hospitality of its local inhabitants, who aren’t burned on the country’s near-constant swarm of foreign visitors.

This small lake is surrounded by charming villages and impressive nature. 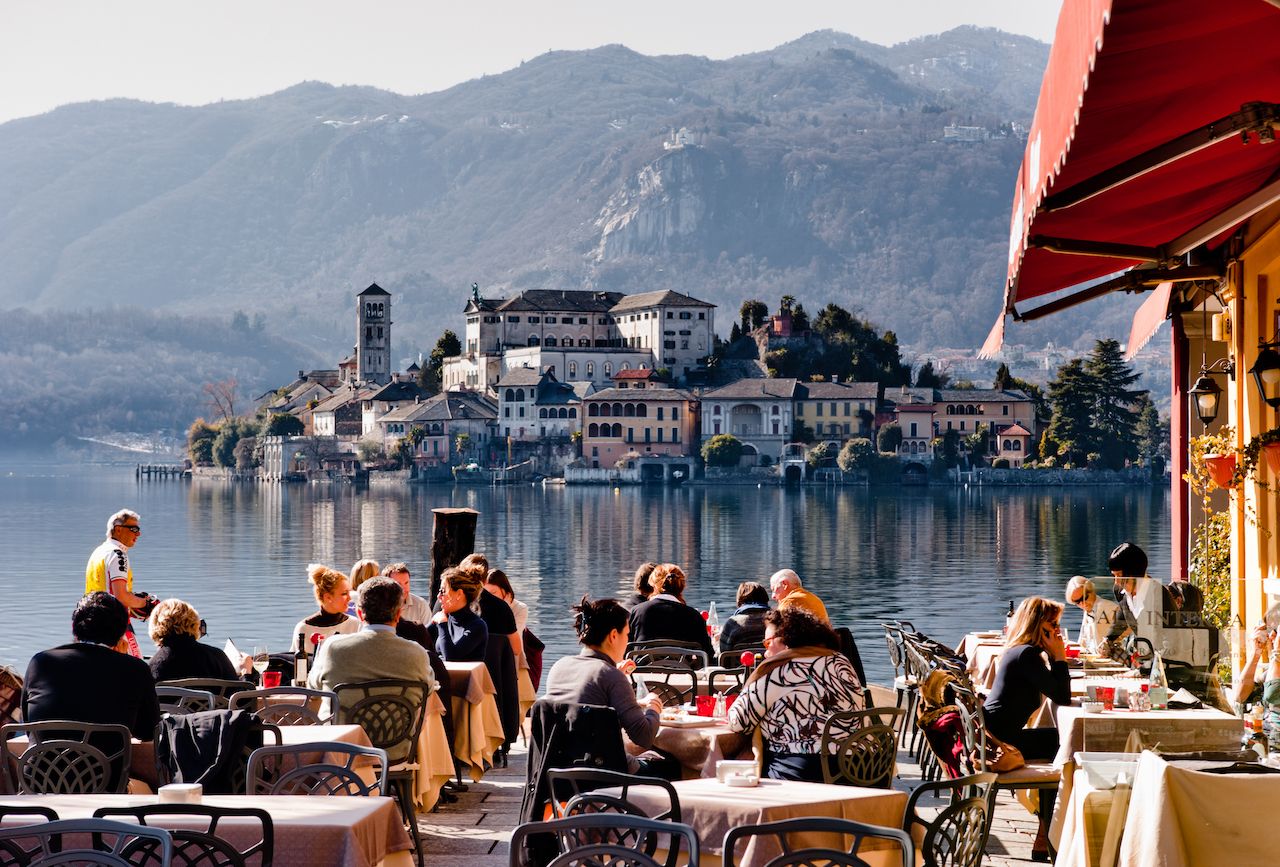 Orta San Giulio (or simply Orta) is, hands down, the most picturesque medieval village that overlooks Lake Orta. Stroll through its cobbled streets and then watch the world go by from one of the cafés or restaurants in Piazza Motta. Or catch a boat to the nearby Isle of San Giulio, dominated by an enclosed monastery. Boats are available daily, departing every 20 minutes.

If you’re seeking gratifying vistas of the lake and its surroundings from the west side, you won’t be disappointed by those from Madonna del Sasso. This is a sanctuary atop a granite rock, reachable also on foot from towns like Boleto. But the most breathtaking views are from Mottarone: a 4,900-foot mountain in the Pennine Alps between Lakes Orta and Maggiore. It’s about a half-hour winding drive from Orta to reach the top, with free access via the town of Armeno. On a bright, sunny day, you’ll be able to admire as many as seven lakes from its summit. And if you hit the jackpot, you might even spot Milan in the distance. Mottarone is also a great spot for a picnic, so pack a lunch and a bottle of wine.

For a more challenging and diverse itinerary, you can ride by mountain bike the entire circumference of the lake, approximately 40 kilometers or no more than two hours, and go as far as Mottarone if you’re up for the challenge. Local operator Cycle Lago Maggiore offers info on routing and bike rental. It’s also possible to trek all around Lake Orta along the Anello Azzurro (Light Blue Ring) route.

The food is simple yet delicious. 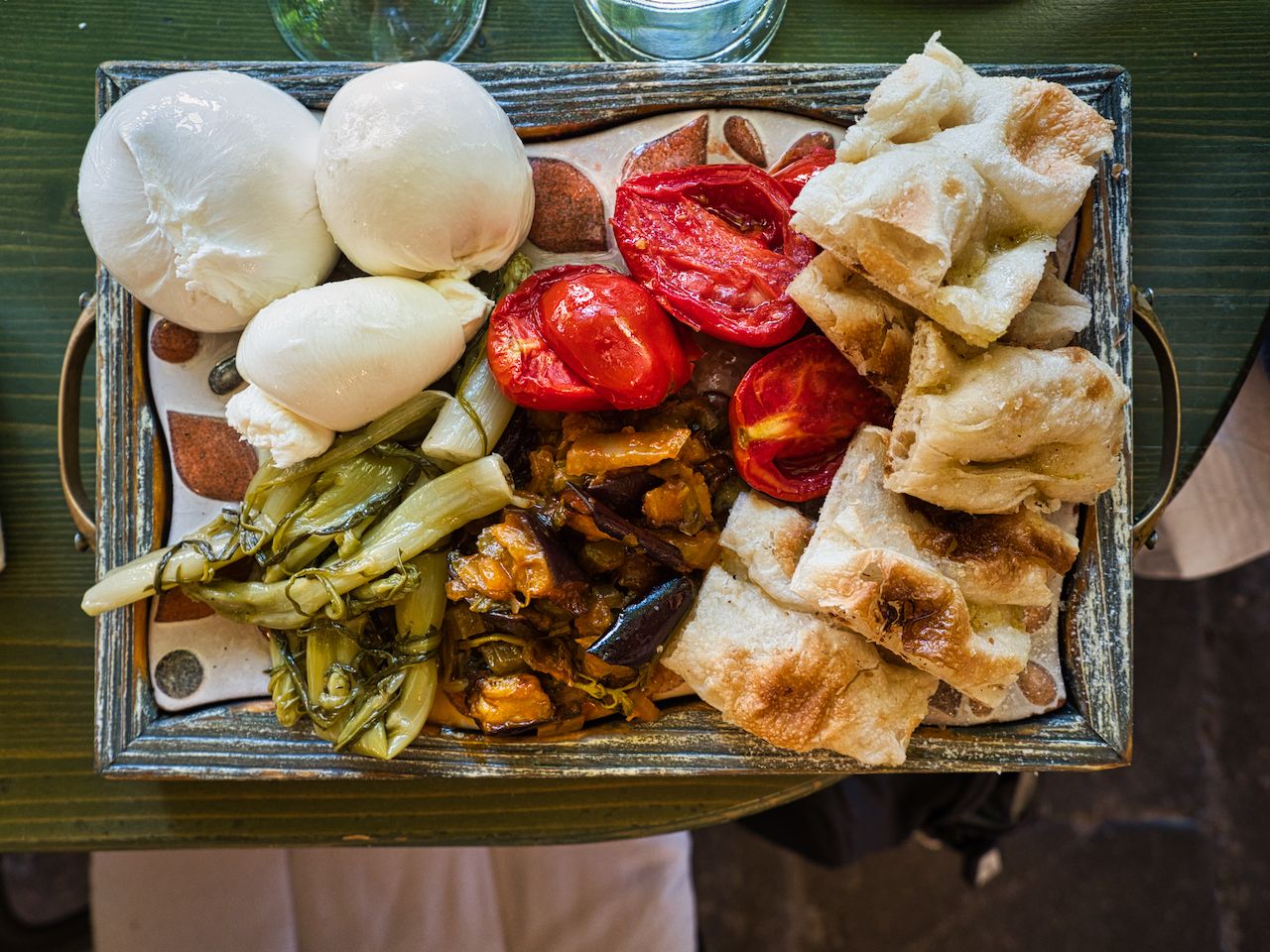 Once you’ve biked, hiked, or otherwise made your way around the lake, it’s time to indulge in the local delicacies of the lush northern region. Expect fresh salame della duia, goat cheese called tomino, and porcini mushrooms aplenty at local cafes. Lake fish such as coregone in carpione (whitefish marinated in vinegar) is a common, along with stuffed perch rolls and fried alborelle, or trout. Have something quick for lunch, especially if you’re hiking, and then reward yourself with the joys of an Italian aperitivo (free nibbles for the price of a drink, most likely a Spritz cocktail) at 6:00 PM.

Afterwards, you can have a full dinner in a traditional restaurant like Bocciolo or Leon d’Oro in Orta San Giulio, or in the two-star Michelin restaurant Villa Crespi. For a charming trattoria a little off the beaten track, check out Osteria San Martino in Crabbia. And for a special meal with a view, try Villa Pizzini on Mount Mottarone. As everywhere in Italy, restaurants, unlike cafés, charge a coperto (cover charge). It’s normal — you’re not being ripped off. It’s usually a couple of euros (about $2) and covers table linen, cutlery, and bread.

There’s no need to go in low season to avoid the crowds. 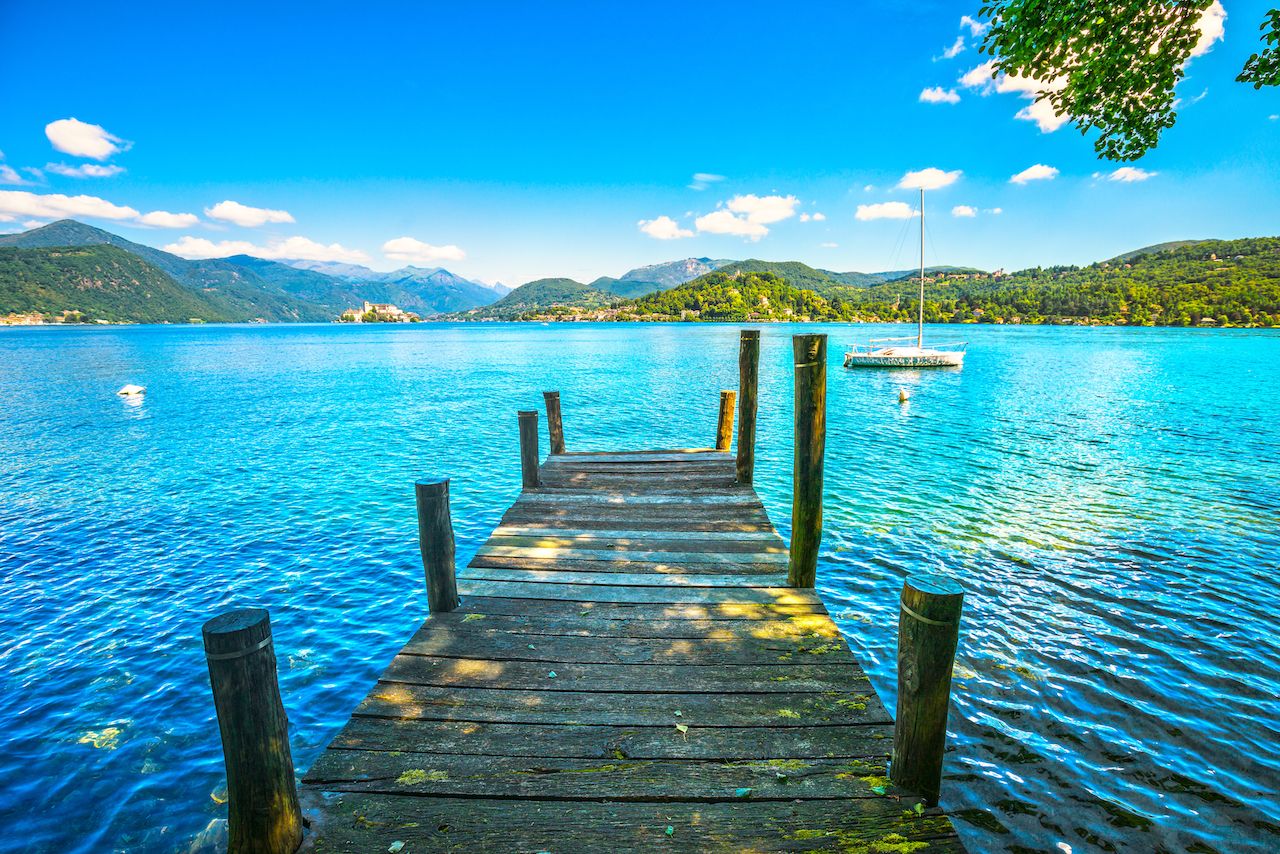 Although you’ll bump into plenty of wedding receptions in late spring and Swiss day-trippers on market days, the Lake Orta area never feels too touristy, not even in high season. April to October are the warmest months, and possibly the best, particularly for outdoor activities. But thanks to its own microclimate, the lake is never affected by huge fluctuations in temperature. Make sure you don’t visit the lake itself on a wet day — there’s nothing as melancholic (or poetic) as being by a lake in the rain. If you do get unlucky, though, there’s always more wine to be had.

Lake Orta is a two-hour train from Milan, perfect for a day trip or weekend getaway. 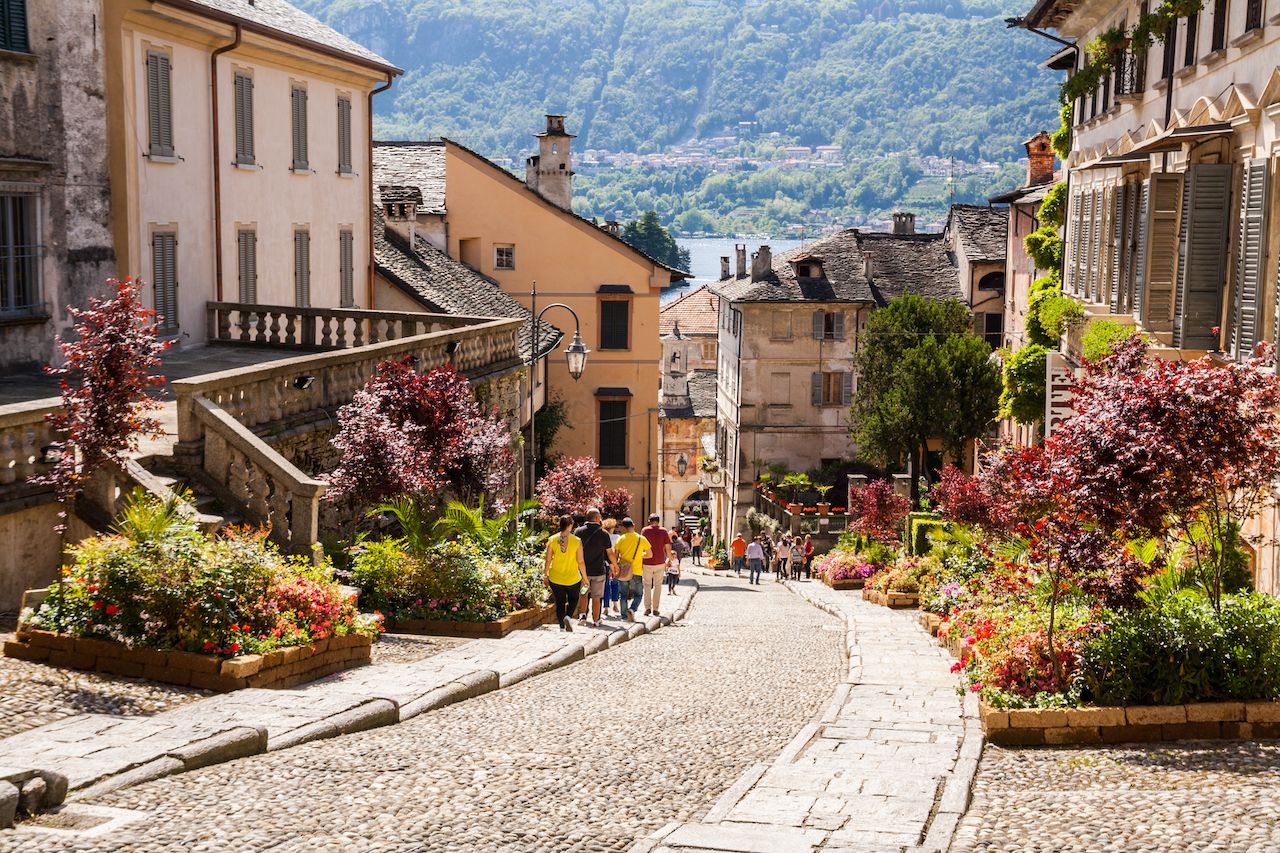 Fly into Milan Malpensa and you’ll be by Lake Orta in about one hour by car. Alternatively, from Milano Centrale Railways Station, it’s a two-hour train ride to Orta-Miasino or Pettenasco via Novara. Find times and prices on trenitalia.com. For overnight stays, depending on your budget, the best hotels include Villa Crespi (five stars), Hotel Giardinetto (four stars), and La Sibilla Cusiana (three stars). Camping is also available, at Camping Orta for example.

TravelWhy You Should Visit Milan Even if You Aren’t Into Fashion
Tagged
Budget Travel National Parks Travel Trip Planning Italy
What did you think of this story?
Meh
Good
Awesome

May 4, 2022 Suzie Dundas
✖
travelstoke
Download the mobile app
stoked by