The Netherlands is a country with a close relationship to water. It’s cities, most famously Amsterdam, are sliced through with idyllic canals that locals and tourists enjoy cruising by boat on leisurely afternoons. The Netherlands is also a coastal country, and North and South Holland in particular are peppered with beaches. Given the proximity to the ocean, it’s perhaps no surprise that fish are a prominent feature of Dutch cuisine — from Hollandse nieuwe (raw herring served with gherkins and onions) to gerookte paling (smoked eel).

One of the best ways for a newcomer to the Netherlands — and more specifically Holland, which borders the North Sea — to experience the Dutch love affair with fish is to try kibbeling. This immensely popular street food, which can be found all over Holland, bears a striking resemblance to the standard fare at ubiquitous fish and chips shops in Britain, a nation equally enamored with the ocean.

The name kibbeling is a shortened, simplified version of kabeljauwwang, the Dutch word for cod cheek. The name refers to any waste products from the cod, which in the 18th and 19th centuries referred to the whole head of the fish. These scraps were, at the time, food reserved for peasants and the poor, but by the 20th century, fishmongers recognized kabeljauwwang for what it was: An opportunity to cash in. These industrious fish sellers began frying cod leftovers and selling it as a street food. The port city of IJmuiden, in North Holland where sea locks control access to the Atlantic Ocean, claims to be the original home of the dish. 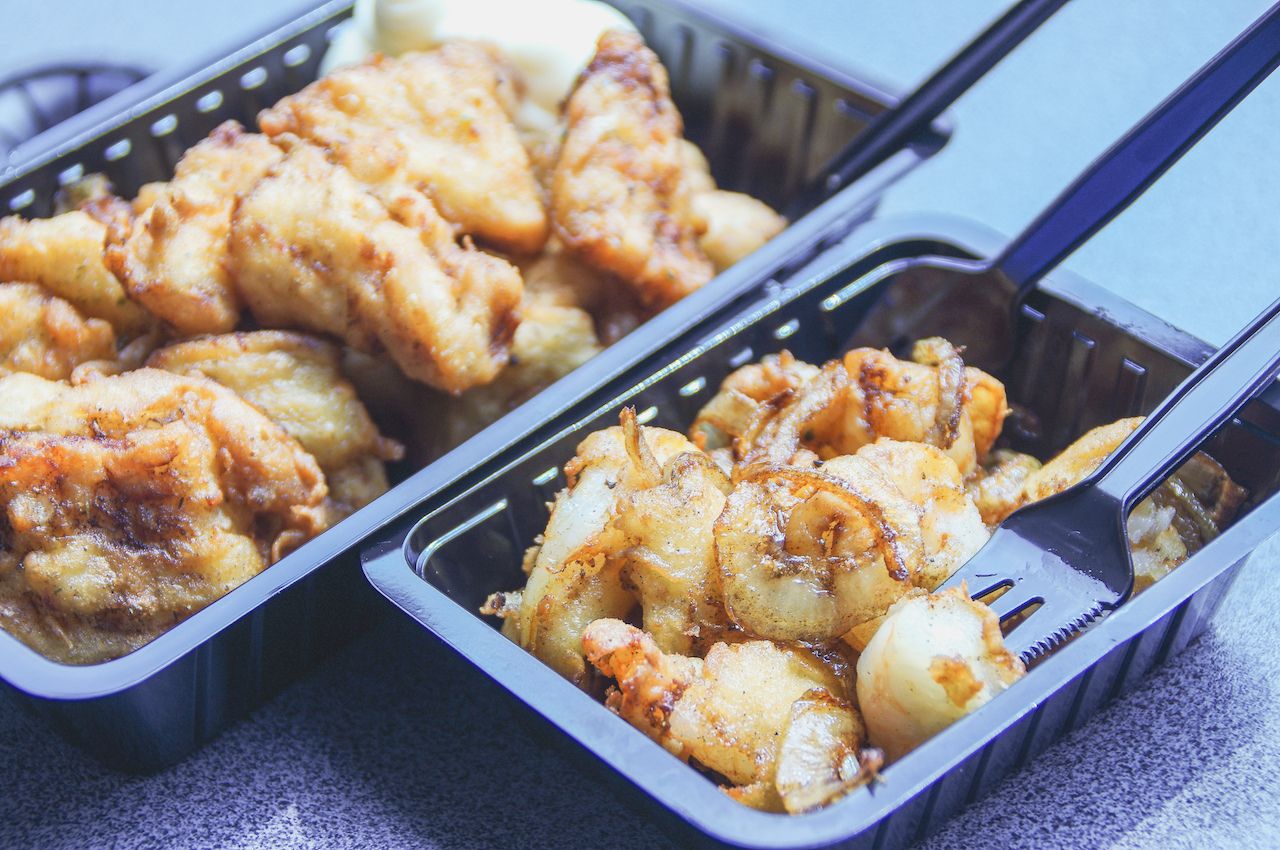 Abundant in the North Atlantic, cod is the fish of choice for kibbeling, as well as a similar dish known as lekkerbek. The latter, in which the whole cod fillets are battered and fried, is much closer to a traditional British fish and chips. What sets kibbeling apart is that the fish is cut into bite-sized chunks before it’s served.

The spice mix used in the batter for kibbeling is another element of the dish that sets it apart from other Western fish and chips styles. It usually incorporates a little spice and smokiness from cayenne, ground mustard, and paprika. Ginger and nutmeg are often also added to spice blends, as well.

How to eat kibbeling

A central element of the appeal of kibbeling is that it’s portable and convenient. It’s an easy snack to grab while you’re exploring the architecturally stunning streets of Amsterdam. The Dutch understand how satisfying a warm, fried, greasy snack can be on both a hot summer day and a chilly fall afternoon.

Today, vishandels (fish vendors) and street food stalls in big cities along the coastal beach towns of Holland prepare kibbeling not just from cod, but from all sorts of less expensive white dish, like pollock, hake, whiting, and haddock. Kibbeling is served on a schotel, a disposable serving tray, and the experience is not complete without a range of dipping sauces. The most common are ravigote (a combination of vinegar, shallots, and capers), remoulade, cocktail sauce, and garlic aioli, known in the Netherlands as knoflook saus.

Where to try kibbeling in Holland 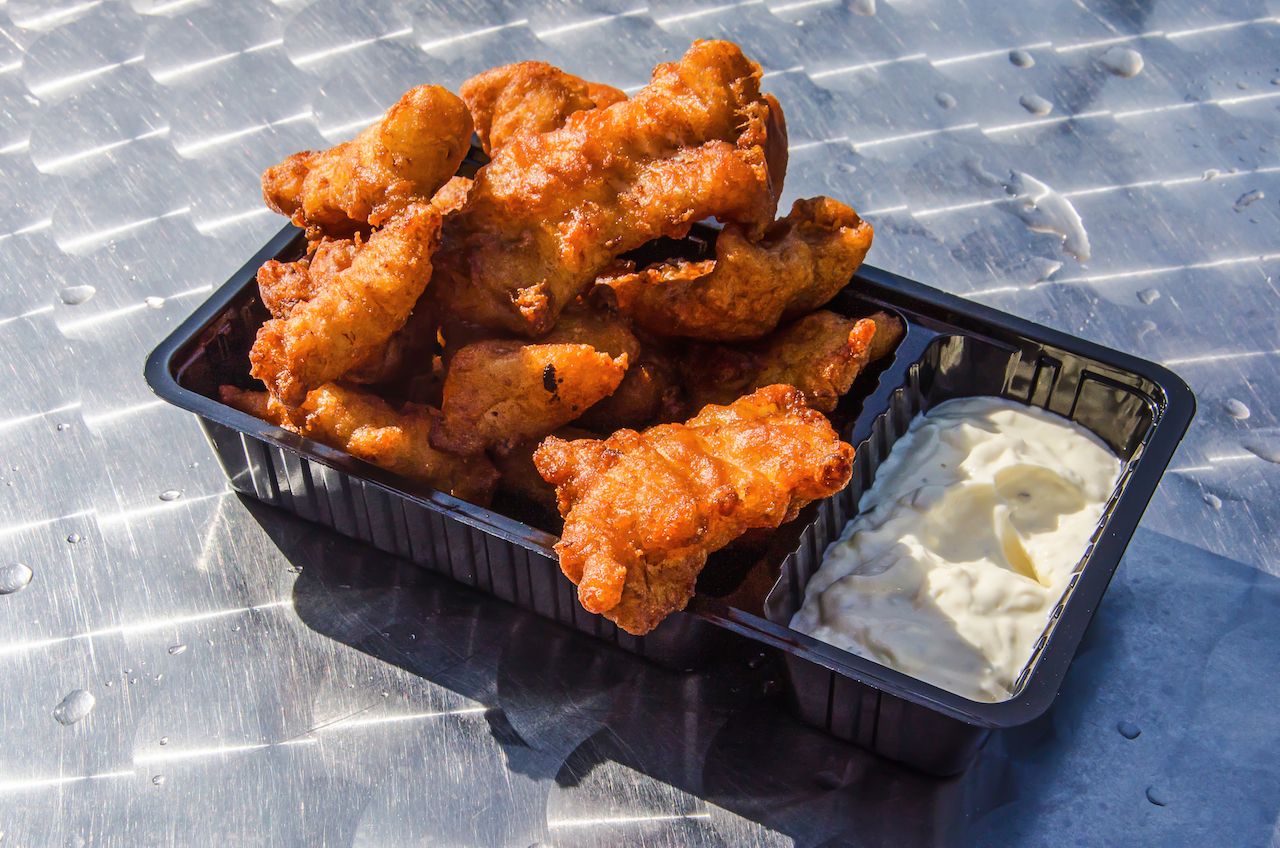 Frens Haringhandel: This adorable corner shop decked out in red, white, and blue stripes (the colors of the Dutch flag) is most famous for its raw herring — or haring as it is known in the Netherlands. A cold herring sandwich, known as broodje haring, and fried to order kibberling are worth a special trip — even the smoked eel has an excellent reputation. Just be sure to carve out some extra time, as there’s usually a long line out the door.

Haringkraam Buitenhof: Located in The Hague, this red, white, and blue stall is beloved for its broodje haring sandwiches topped with diced onions. Located in an area with often chilly weather near the North Sea, the hot kibberling is also a first rate choice.

Hoogies: Americans might be reminded of an East Coast boardwalk walking into Hoogies in the beachside town of Noordwijk, in South Holland. Located in the Dune and Bulb Region, Noordwijk is known not just for its beaches but for its tulip fields. After a day at the beach, crowds flock to Hoogies for treats like homemade fries, ice cream, and, of course, fish and chips — the perfect family friendly fare for a day out in the sun.

The Seafood Shop: This chic takeaway spot in Amsterdam offers a few stools to sit, but mostly it accommodates takeaway orders. For those lucky enough to snag a seat, not only is the kibbeling worth sampling, but there are also fresh oysters and raw herring on the menu. Its cheeky catch phrase — “Catch you later” — might grab your attention from the window.