Budapest is filled with endless things to do, from exploring impressive Castle Hill to walking through the Jewish Quarter and along the Danube Promenade. But with a constant buzz wafting down Budapest’s cobblestoned core, many forget that the city has several attractions that cannot be seen from above. Natural caves systems underlie much of the city, which have served as dungeons, churches, even a hospital. Here’s what to see in Budapest below ground.

1. Caving in the Buda Hills 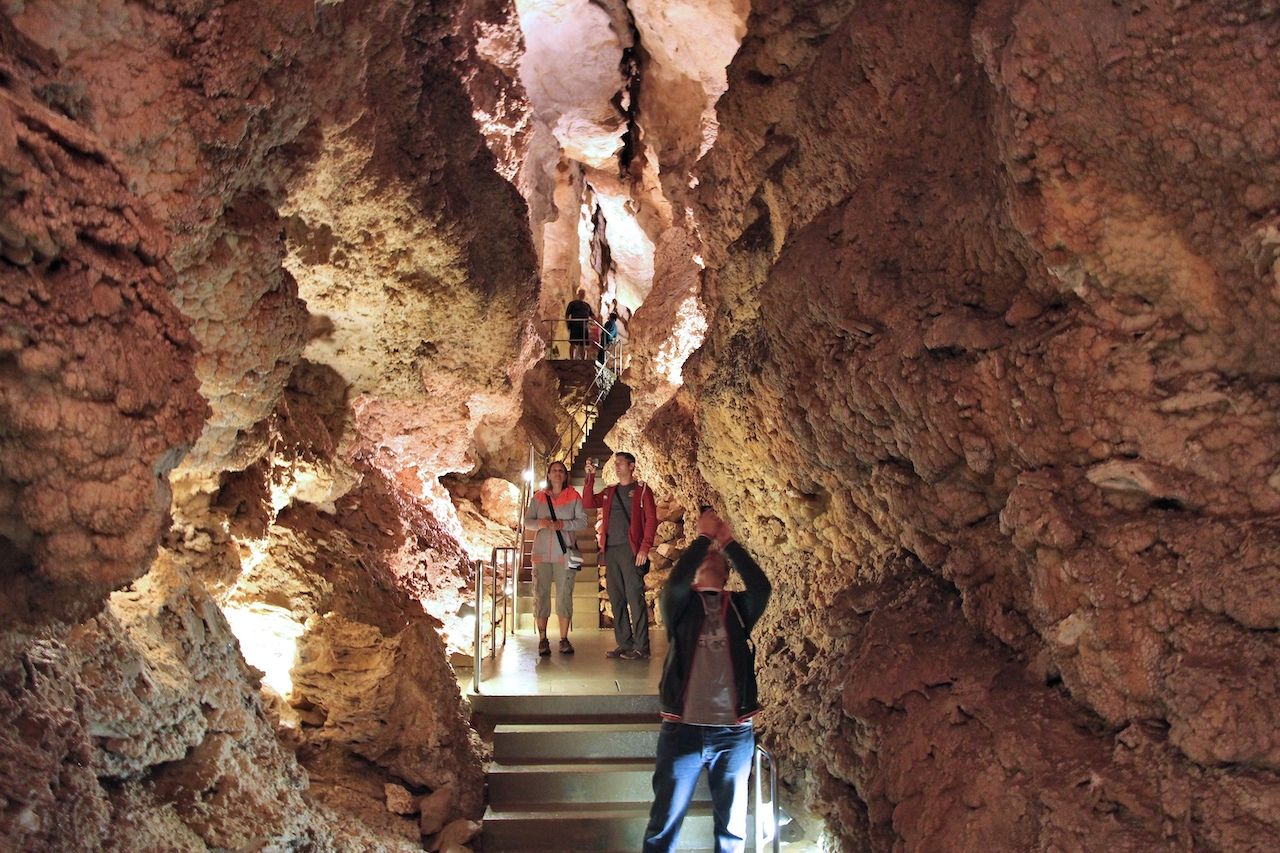 Budapest is a city of two worlds, Buda and Pest. The main hub of the city — with its Parliament Building, food market, and commerce — lies in bustling Pest. Across the Danube River lies Buda, with its castle, fancy residential homes, and the picturesque Buda Hills. Although ascending the forested trails of the Buda Hills is definitely worth your time, even if just for the views, there’s a reason to look down as well — as there’s an entire cave network underneath your feet.

The two most popular caves are Pálvölgyi (Paul Valley) and Szemlőhegyi (Szemlo Hill) Caves. Both provide a long network of underground walking trails, plus a consistent temperature of about 53 degrees — so don’t forget a jacket even in the summer months. With ladders and stairs, you can climb deep into the chilly caves and admire the crystal formations, stalactites, and stalagmites.

The Pálvölgyi Cave stretches around 18 miles, making it the longest cave network in Budapest. It’s often considered the most beautiful as well, thanks to its dripstone formations. If you want to reap the health benefits of mineral-infused air, then the Szemlőhegyi Caves are your best bet. Tours to the Pálvölgyi Cave are about $6.50 for adults, but you can get a combined ticket to both it and the Szemlőhegyi Caves for $10. 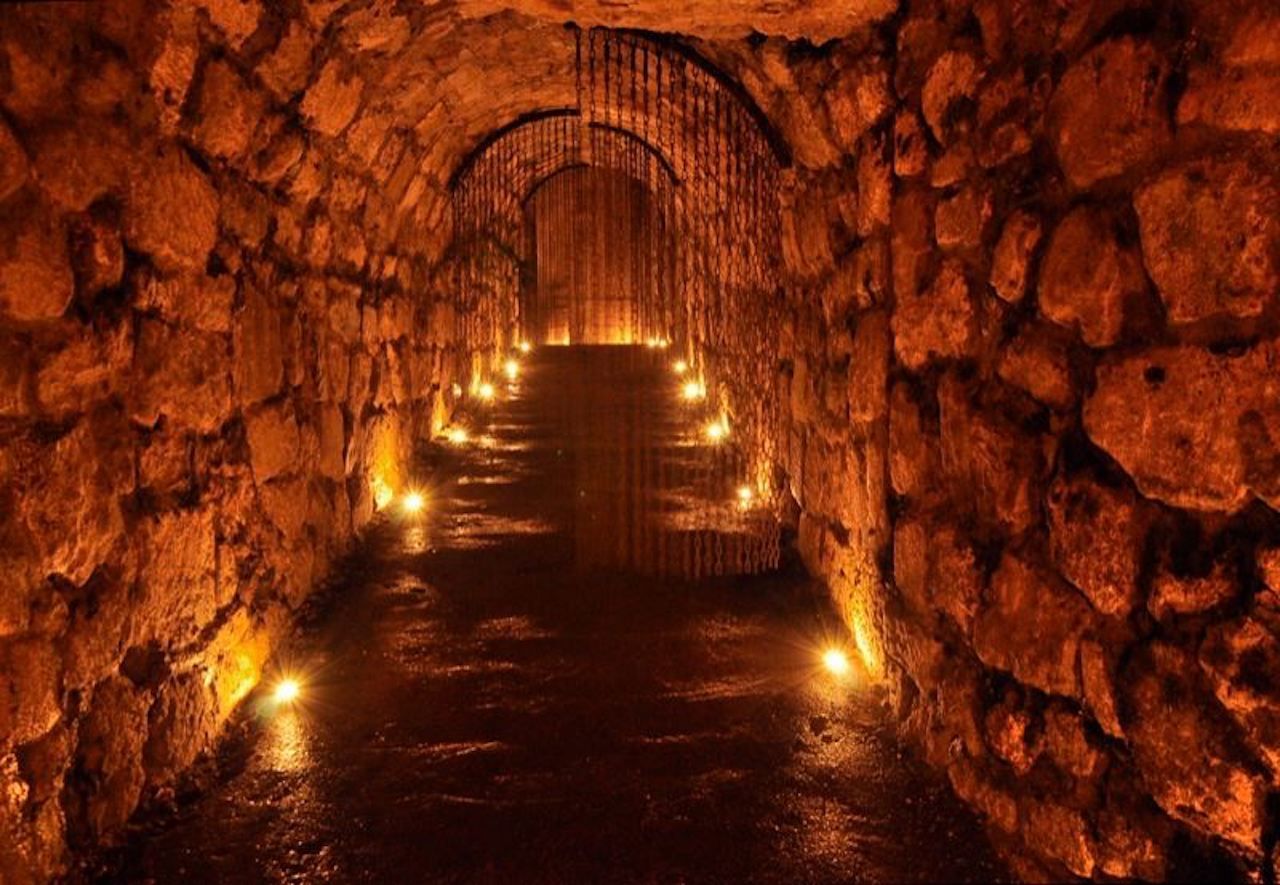 If you’re traveling with a family, an easier caving experience is the Labyrinth under Castle Hill. Although the history of the Labyrinth — which is part of a natural underground cave system — goes back hundreds of thousands of years, its most recent use was as a shelter during World War II. Its other roles have included wine storage, mining, military purposes, and even a prison. Dracula — or rather the Transylvanian prince known as Vlad the Impaler who inspired the fictional blood-drinking character — is thought to have been imprisoned there.

The labyrinth is extremely popular today and contains special exhibitions inside as well. The Labyrinth costs $10 for adults and $3.40 for kids under 12. It takes just 30 minutes to walk through, but factor the line into your plans. The best way to see it is during its evening tour at 6:00 PM, when you tour it only with the light of oil lamps.

3. Hospital in the Rock 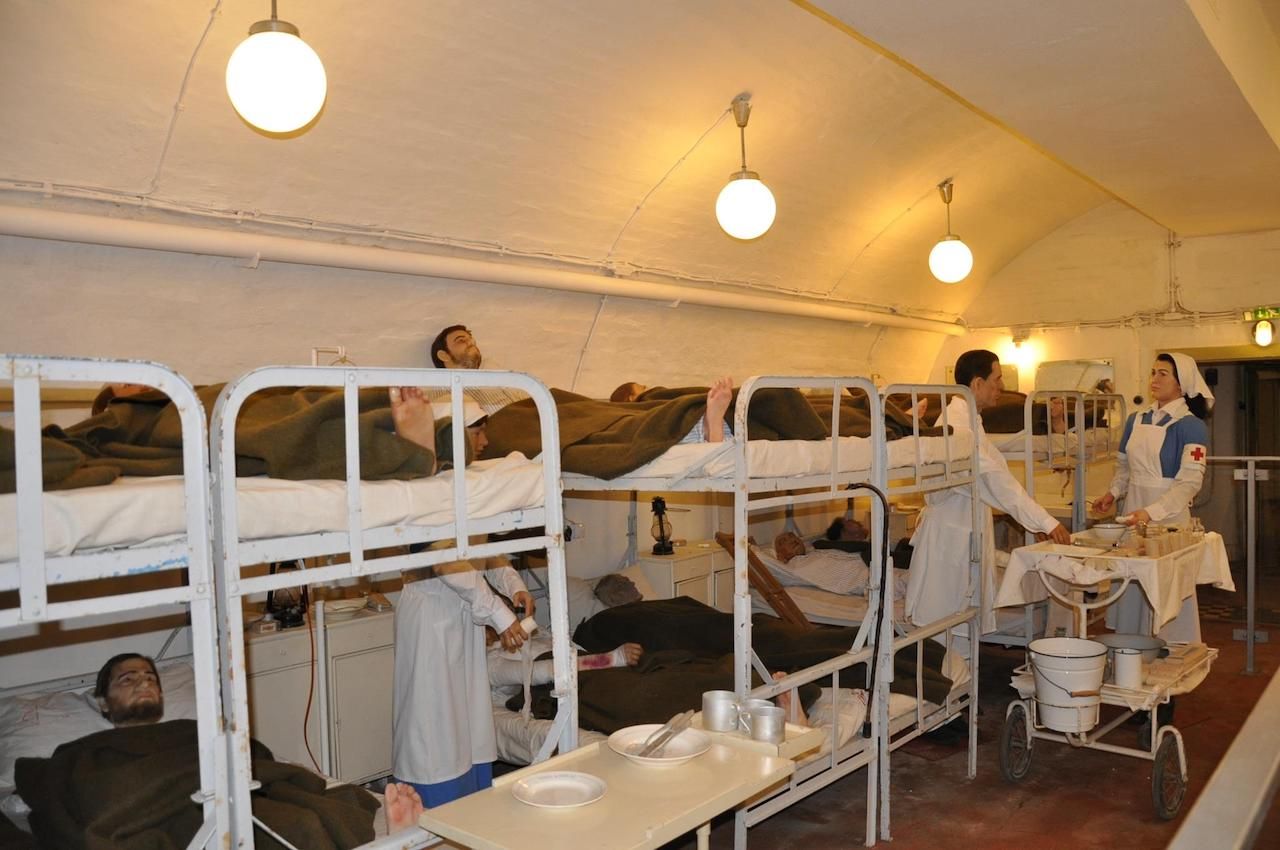 Photo: Hospital in the Rock/Facebook

Although the Labyrinth may have mostly been used for corridors and storage rooms, one part of the underground cave network was a vital aspect of war culture in Budapest. The Hospital in the Rock also sits below the castle and is now home to a museum. During WWII, however, the space was used as a very important air raid hospital.

Later, during Hungary’s 1956 Revolution, the hospital was reopened to treat wounded civilians and soldiers. It closed at the end of that year, only to expand into a secret nuclear bunker during the Cold War. In case of a nuclear or chemical attack, the bunker was still equipped with a fully functioning hospital. During this time, some doctors and nurses regularly practiced procedures to be prepared. Today, you can visit by guided tours, which departs on the hour daily from 10 AM, with the last tour leaving at 7:00 PM. (In summer, tours run on the half hour in the middle of the day as well). The tour costs $13.50. 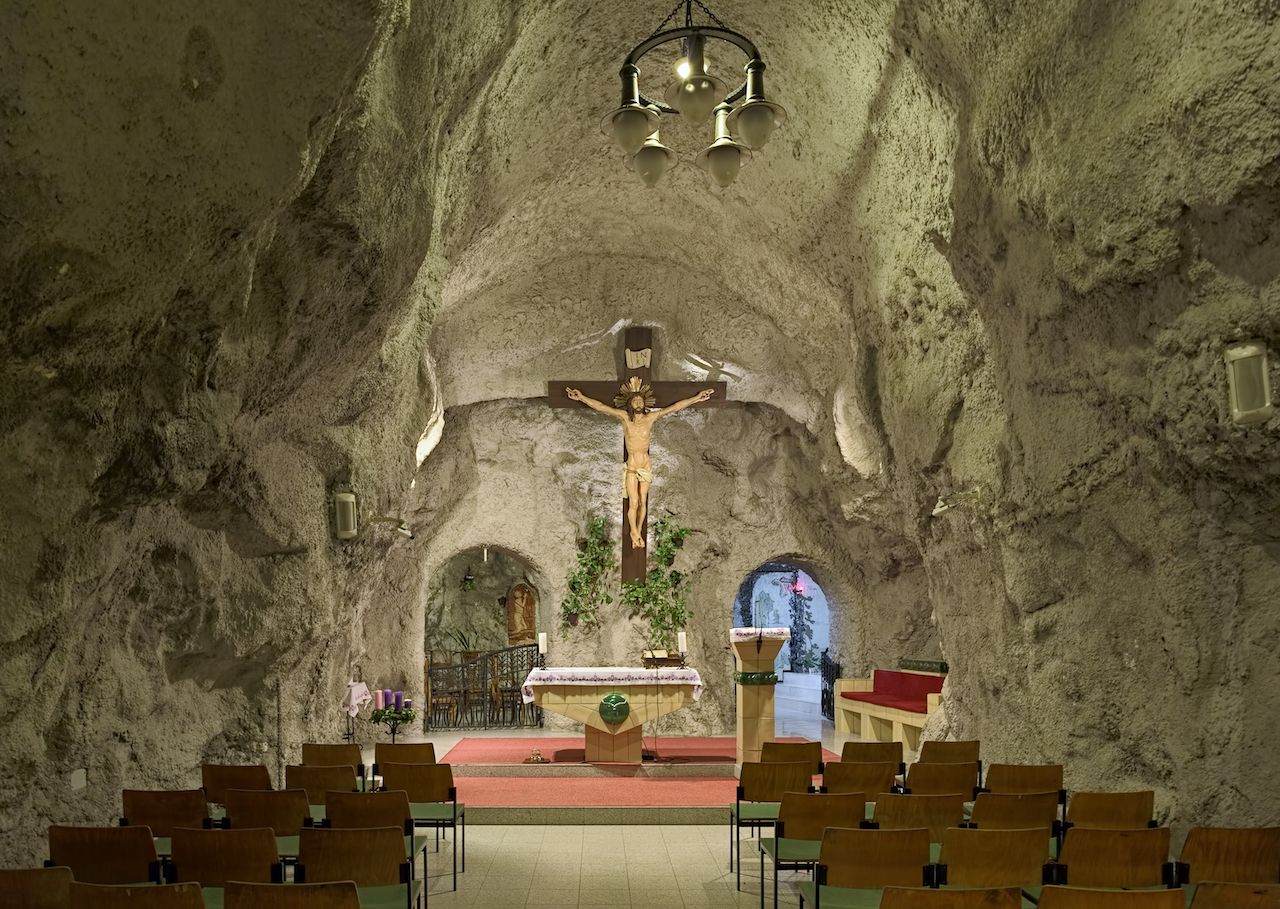 After Castle Hill, the other hill that dominates Buda’s skyline is Gellért Hill. You know it as home to Hungary’s own Liberty Statue and the famous citadel. But deep under these landmarks lies another cave network. The only area open to the public is St. Ivan’s Cave, which today consists of Sziklatemplom, also known as the Cave Church, Rock Church, or St. Ivan’s Cave.

Founded in 1926, the church was used as a hospital and treatment center during WWII. During the Communist regime, however, the church was sealed shut and inaccessible to the public. It reopened in 1991 after the end of communist rule. 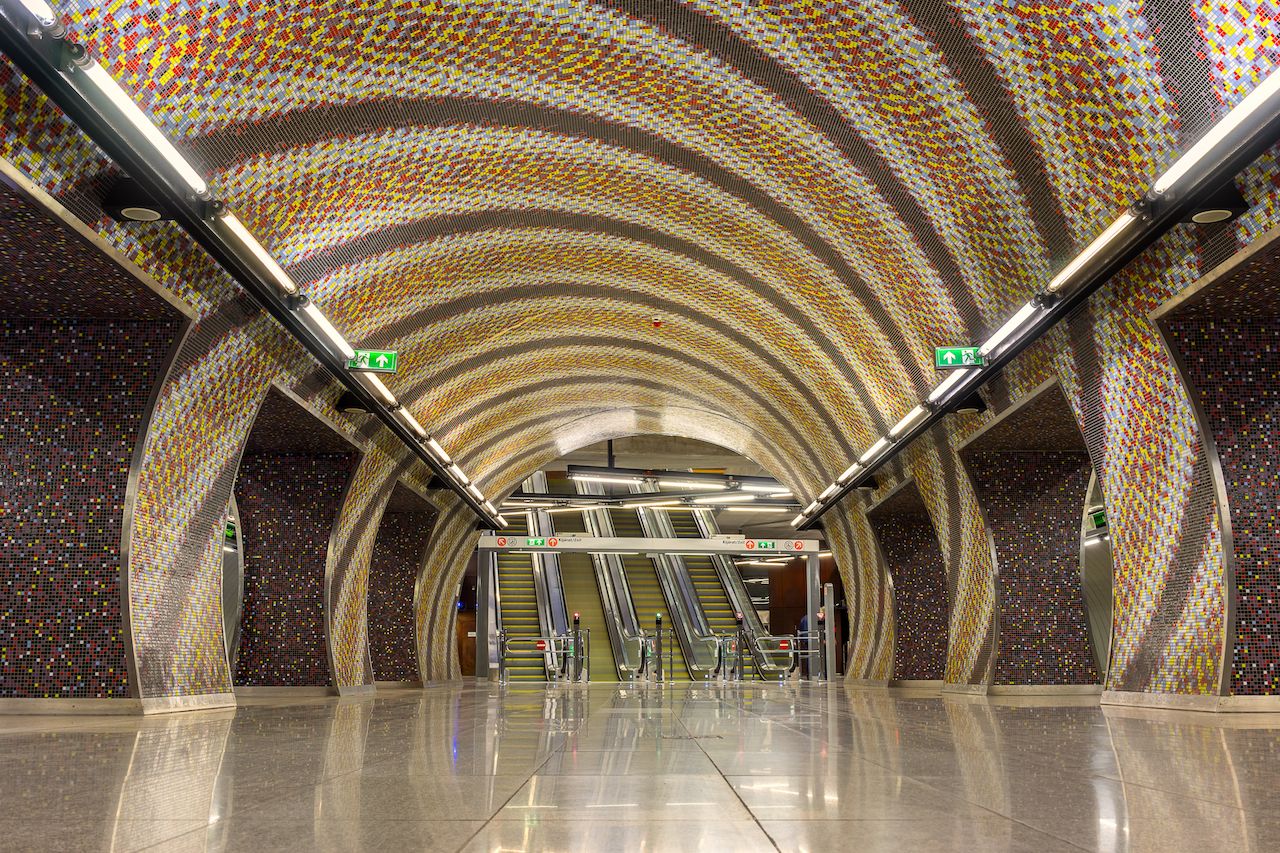 London may have Budapest beat when it comes to the oldest underground metro line in Europe, but the city’s famous yellow line (known as M1) is the oldest outside of the British Isles. It opened in the spring of 1896, connecting two of the city’s biggest hubs: the Danube Promenade and City Park. Along the way, it now makes several stops including St. Stephen’s Basilica, the Hungarian State Opera House, Heroes Square, and Széchenyi Thermal Baths.

As you hang on to leather straps and catch glimpses of tiled subway stations, you’ll feel like you’ve stepped back in time. Contrast the M1 with the city’s newest metro line — the M4 green line — and you’ll go from historic to modern. Each station on the M4 line was designed by a different artist and showcases Budapest’s technological innovation.

WellnessThe 7 Fanciest Thermal Spas in Budapest You Need To Check Out
Tagged
Culture Insider Guides Budapest, Hungary
What did you think of this story?
Meh
Good
Awesome