2020 travel trends show a return to the simplicity of our world, with an emphasis on sustainability, locally grown and made items, and origins. Well beyond Transylvania, Romania has outposts where traditionalism and traditions are flourishing. The Romanian spirit and the impact of other nations onto the country bordering the Carpathians, the Danube, and the Black Sea led to something that has been lost in many parts of our world: a genuine encounter. Each of these three regions in the country is unique in its history and offerings, but all are worth a visit.

Take in Romania’s deep history in the western border counties. 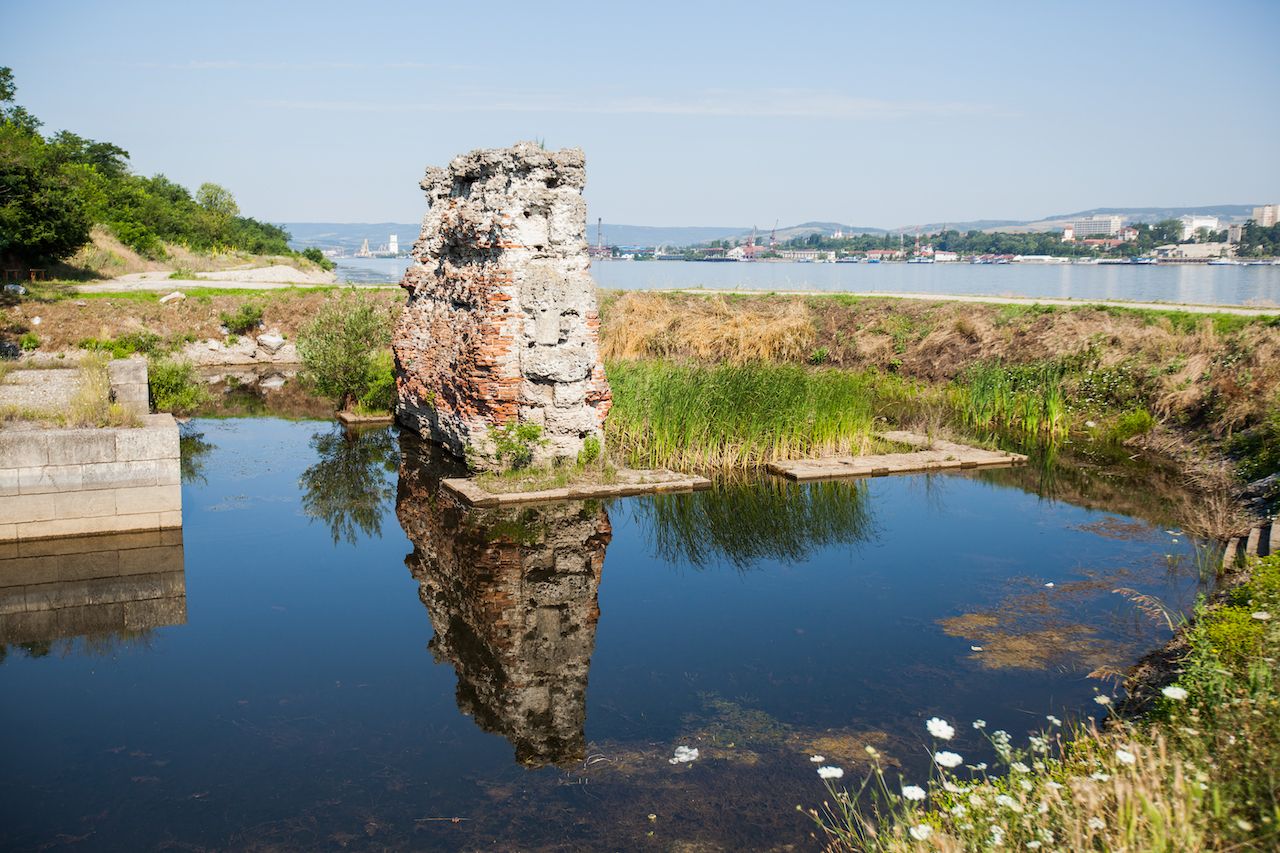 In the far west of Romania, the counties of Mehedinţi and Caraş-Severin border Oltenia and Banat, two of the country’s most historically significant regions. The Danube is the main source of waterlust here, winding through on its path from Germany to the Black Sea. The river and surrounding bodies of water are popular for birding as over 300 species live around the lakes, waterfalls, and other wild rivers found throughout the region.

But history takes center stage here. Hire a local guide for a trip to the Roman Emperor Trajan’s Bridge and to get out on the water through the Danube Gorges, something to remember not only for the sunrises and sunsets but also because it allows you to take in a good deal of history in a single day. Many history buffs are familiar with the bridge, designed by architect Apollodorus of Damascus. It was built between 103 and 105 AD in a second attempt by the Romans to conquer Dacia. This was an ancient territory mainly inhabited by the ancestors of the Romanian nation, holding similar boundaries to today’s established borders. One of the bridge’s feet can be found in Drobeta-Turnu Severin, the other one on the Serbian bank. It is one of the oldest such structures still somewhat intact. 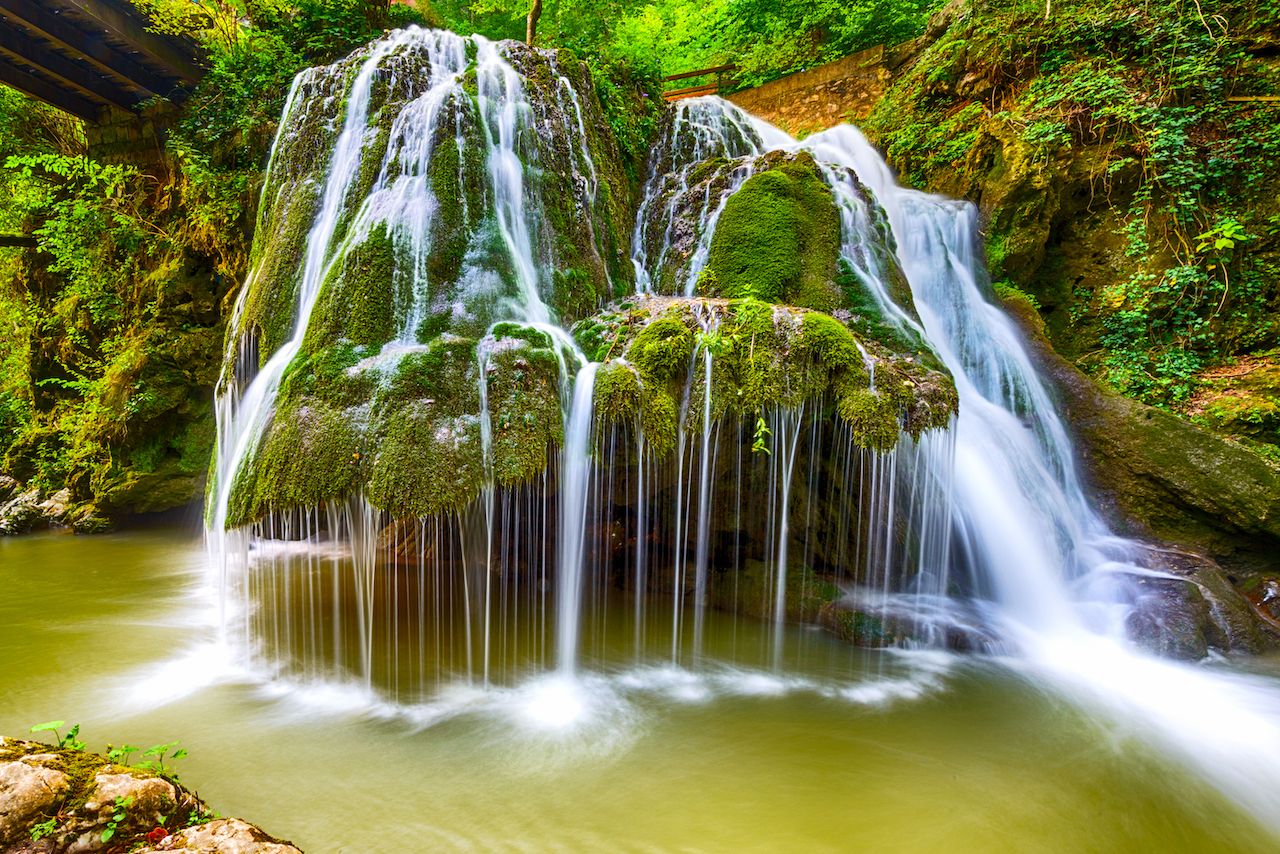 About 45 minutes west, Tabula Traiana can be spotted on the Serbian side — a two-millennia-old plaque commemorating Trajan’s victory over the Dacians in 106 AD. It is said that Decebalus, who had successfully kept the Roman Empire away from Dacia since 88 AD, had committed suicide near here to avoid capture. He was Romania’s last ancient king, and his bravery and devotion are still praised by Romanians — his face was carved into stone in the town of Eselnita in 1994. It is the tallest rock-hewn sculpture in Europe and the third tallest in the world. You can see it from the road passing through Eselnita, but the water perspective is a more unique way to view the sculpture.

An hour to the north, Băile Herculane is a town that has just recently discovered some of the few Roman thermal systems in the world. Use a soak in the primeval thermal pots at resorts such as Afrodita as welcome relaxation after a day of river touring and sightseeing. 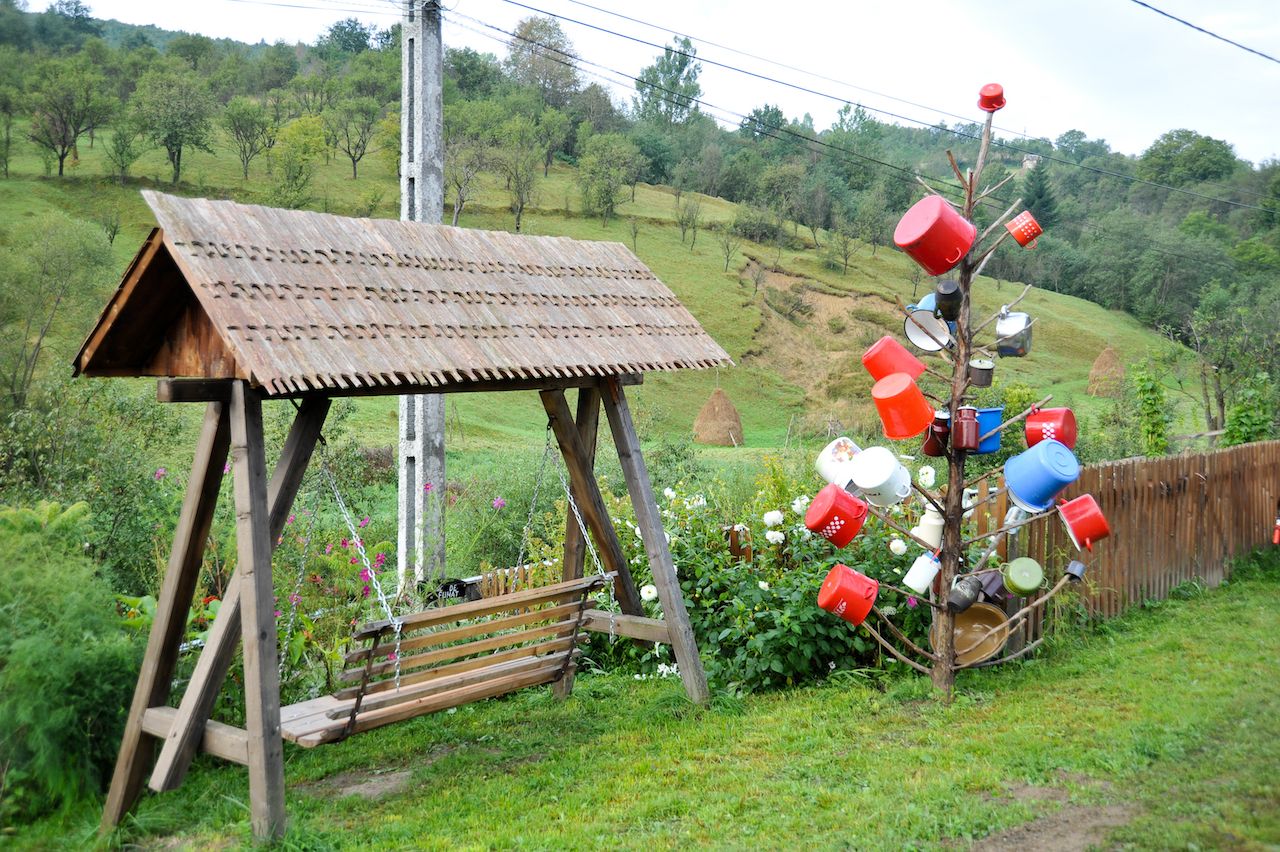 In northern Romania, Maramureş is known as the land of fairytales. Here, spot trees decorated with cooking pots while you roam around local villages — a red pot on top means that there’s a single woman to be married in the household. You’ll see residents wearing traditional outfits, perhaps carrying around bags made of wool en route to Sunday church.

One cold spring, while visiting Maramureş during Easter, the old ways of living caught me by surprise, even though I knew of them. In Surdeşti, a collection of rock formations are currently situated in the courtyard of a local family. My Tanti Rizuca passionately told us the legend of these structures through her strong accent and seemingly archaic words. The rocks, she said, are called Clăile de Piatră and resemble stacks of hay. Her legend has it that a group of peasants had committed the forbidden sin of working on a holiday. St. Peter, as punishment, turned all the hay that they had collected into stone, casting it permanently into place. She quickly added, looking at my partner, “I do hope the two of you are married. In my time, even a lousy goat was sold with deeds.”

Visiting a land that sticks so closely to its traditions is akin to taking a step back in time. Not everything is so outdated, however. Holidays — of which Christmas and Easter are prominent but a minor celebration is likely to include any time guests over — are always accompanied by a shot of horincă, a strong distilled spirit popular throughout Romania. It’s often as strong as 130 proof, though batches vary in potency. Even if you aren’t invited to a family’s home, you can taste the stuff poured straight from a traditional gate in the town of Sârbi. Guided tours of the Maramureş region range from single-day walking tours to full-week-plus all-inclusive experiences. 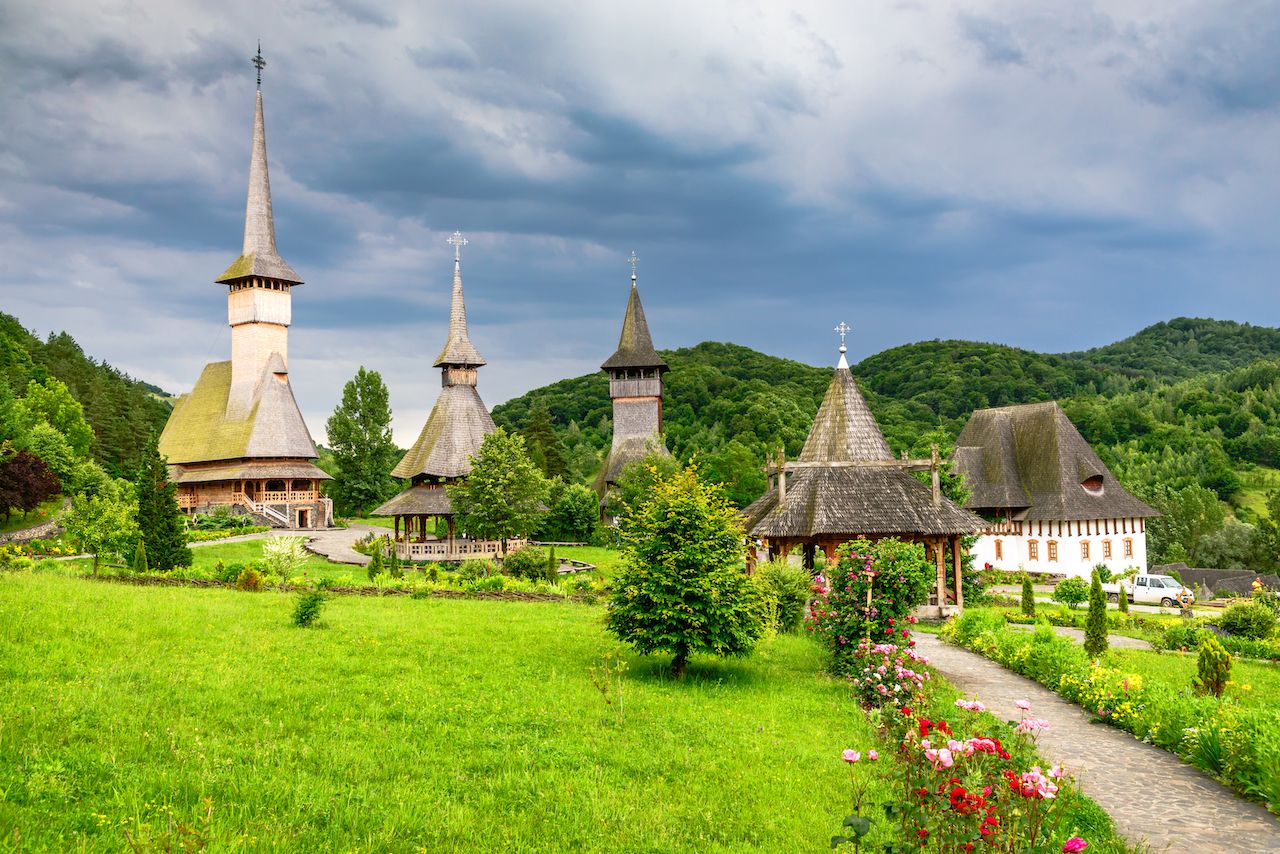 Most Romanians identify as Orthodox Christian or Roman Catholic and, as noted above, take their holidays quite seriously. At the beginning of December, there is a holiday beloved by all Romanians known as St. Nicholas. He comes bearing gifts on the evening of December 5, a full 19 days before St. Nick visits chimneys in the majority of the Christian world. In Maramureş, this is also the chance for carol singers to rehearse for their Christmas performances. Hazelnut rods full of buds are given to dear ones, representing purity of the soul, as well as power.

Church has played an important part in the lives and education of the people in Maramureş and many of the country’s rural counties. Throughout Maramureş, you’ll come across well-preserved wooden churches that encompass a protected UNESCO World Heritage site. Built in similar styles, though over multiple centuries, they have nowadays transformed from places of worship to prime attractions for visitors. Among the most popular is Ieud, which some Romanians claim was built in the 1300s but many historians suggest was actually constructed a few hundred years later. The Codex of Ieud, the oldest known document written in the Romanian language in 1391, was found here. Other UNESCO-listed churches worth a visit in Maramureş include the Rogoz, the Plopis, and the Desesti. Take them all in on a full-day guided tour for about $60.

Splurge on seafood in the Danube River Delta. 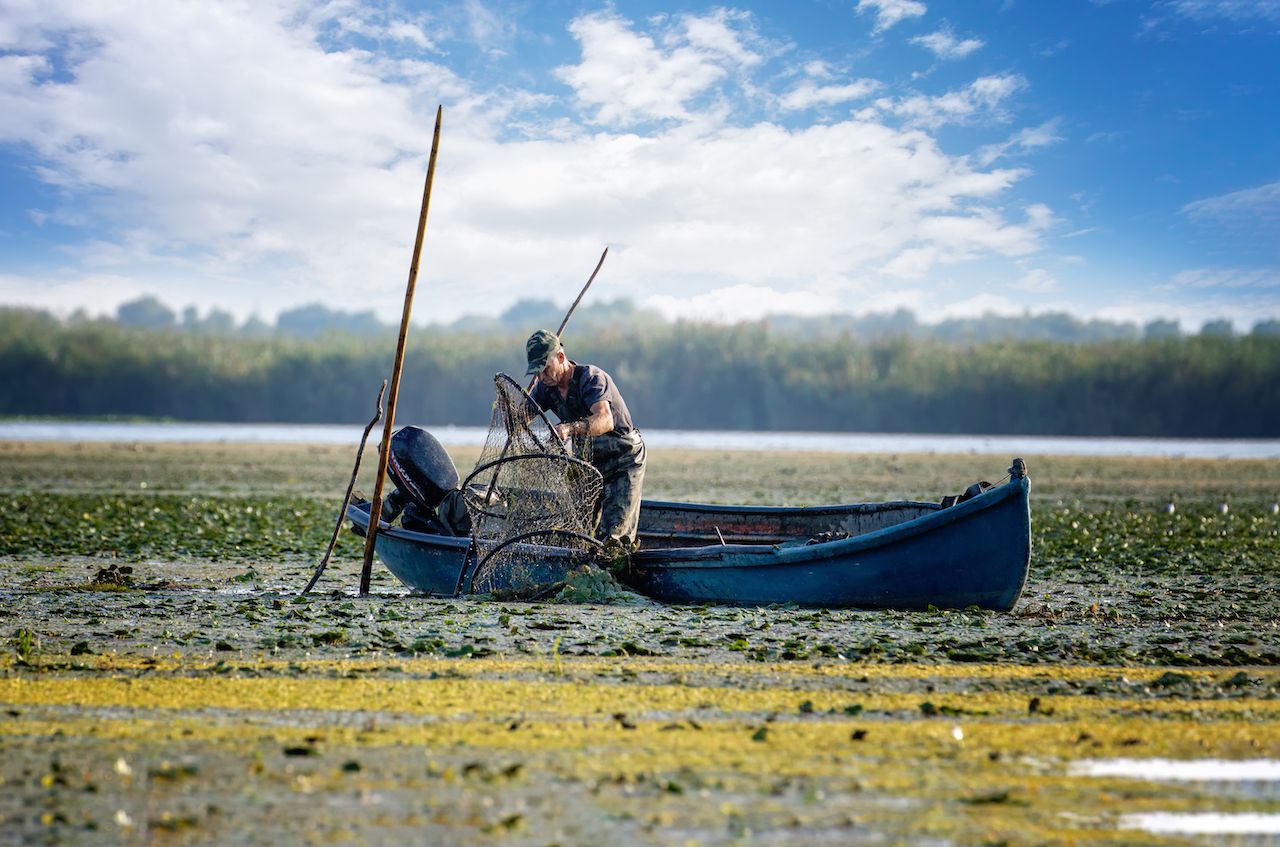 “The Delta,” as Romanians endearingly call it, is a return to the simpler things that life has on offer. A land of extremes where water is queen, the Danube Delta blends the overwhelming and sometimes humid heat of the summer months with long, frozen winters that often isolate residents for days in a row, and sometimes even weeks.

Such circumstances made communities here develop differently from the rest of the country. By adding the Slavic influences of the neighbors, Lipovan customs complete the picture — and the menu, so to speak. Food is, after all, one of those cultural elements that helps define a nation. Vegetarians usually suffer in the Delta, but fish lovers are in their element and can have a taste of the specialties from the remotest of villages to the trendiest of Danube ports.

Borş de peşte, a fish soup, and storceag, a fish soup with sour cream, which are usually made from catfish or sturgeon, are commonly served as a first course. For the second course, you cannot go wrong with fried fish (you’ll often choose between catfish, pike, goldfish, and carp) served with polenta and garlic sauce, Romanian style. Winter visits to the Delta come coupled with saramură de crap, or carp brine.

There are also staple desserts to be licked off your fingers made from the basic ingredients of the area, such as pirozhki, fried buns stuffed with rice and raisins; vareniki, dumplings filled with sour cream and served with honey and walnuts; and the star of the dessert table: the Dobrujan pie. This classic is made with both cottage cheese and raisins in generous amounts and is named after the historical region hosting the Delta. To work off some of that gorging, you can explore the canals in a kayak or a boat, and there are even parts where you can drive or ride a bicycle.

CultureThirty Years After the Revolution, Romania Is Still Rebuilding
Tagged
Culture Insider Guides Romania
What did you think of this story?
Meh
Good
Awesome