For half of the world, December to February means frosty landscapes and chilly temperatures, leaving many in search of warmer weather. Fortunately, it’s summer in the Southern Hemisphere where sandy stretches beckon. Sure, there are obvious beachy locations like Rio de Janeiro and Uruguay’s Punta del Este, but there’s much more shoreline to explore. Let’s head off the beaten path to soak up the sun in some of the most spectacular, yet little known, beaches in South America. 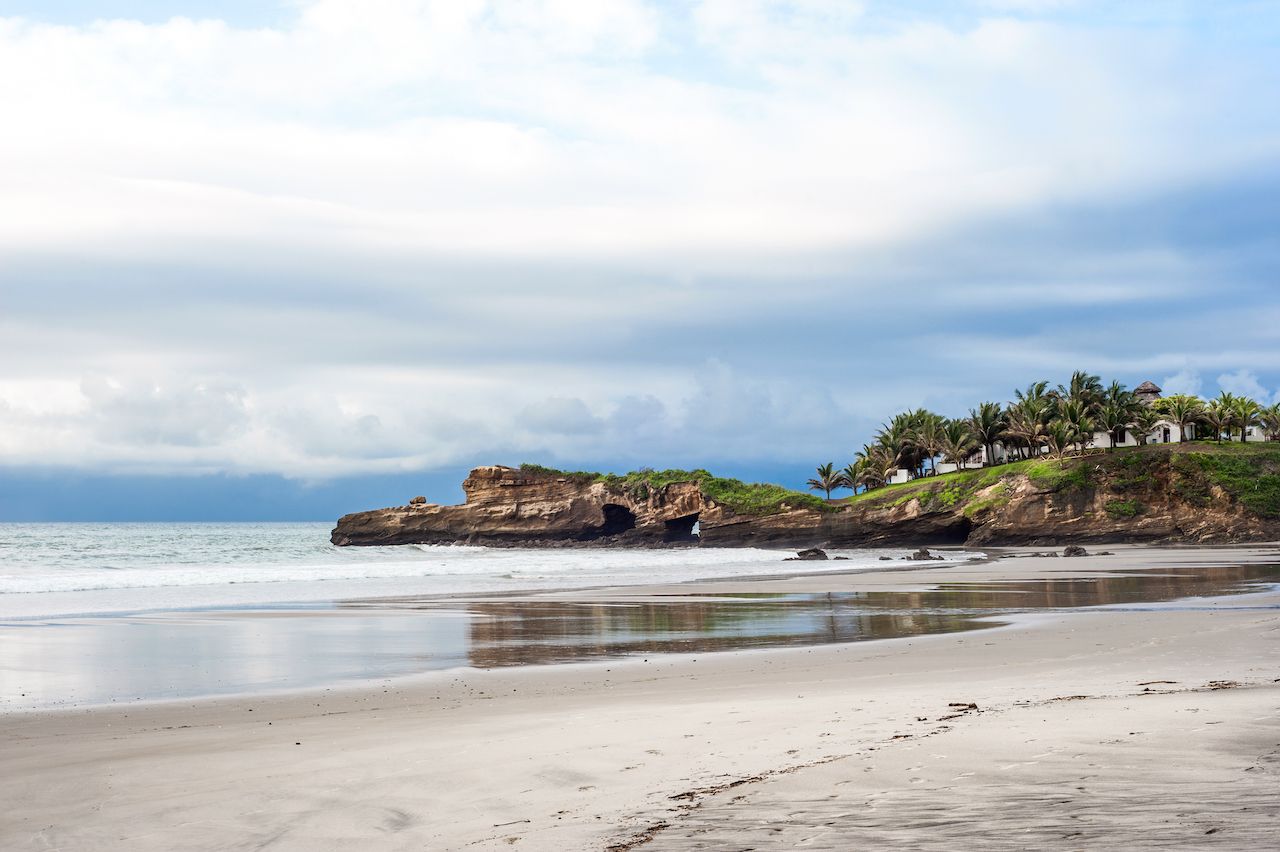 If you’re in the mood for a sleepy but sultry beach village, head to this isolated cove on Ecuador’s north coast. It’s locally prized for its lush, green coastline, black beach, exposed reef, luminescent tides, and bordering rainforests.

While it’s just over 200 miles from the capital Quito, the drive can take over five hours. That may be why very few travelers venture to this remote spot. But that means that while there are plenty of community tours and activities, the hideaway is particularly nice for those who just want to laze about, soak up the sun, and savor plenty of tasty, cheap seafood. It’s a secret gem for surfing, too.

Quietly tucked 66 miles south of Esmeraldas and 111 miles north of Canoa, Mompiche has low-key amenities and a local vibe make that make it an idyllic spot for a true getaway. December to February is an ideal time for surfing on this subtropical beach when sea and air temperatures both hover in the low 80s Fahrenheit. A great place to crash is at La Casa, which offers beachfront camping and affordable bamboo bungalows. 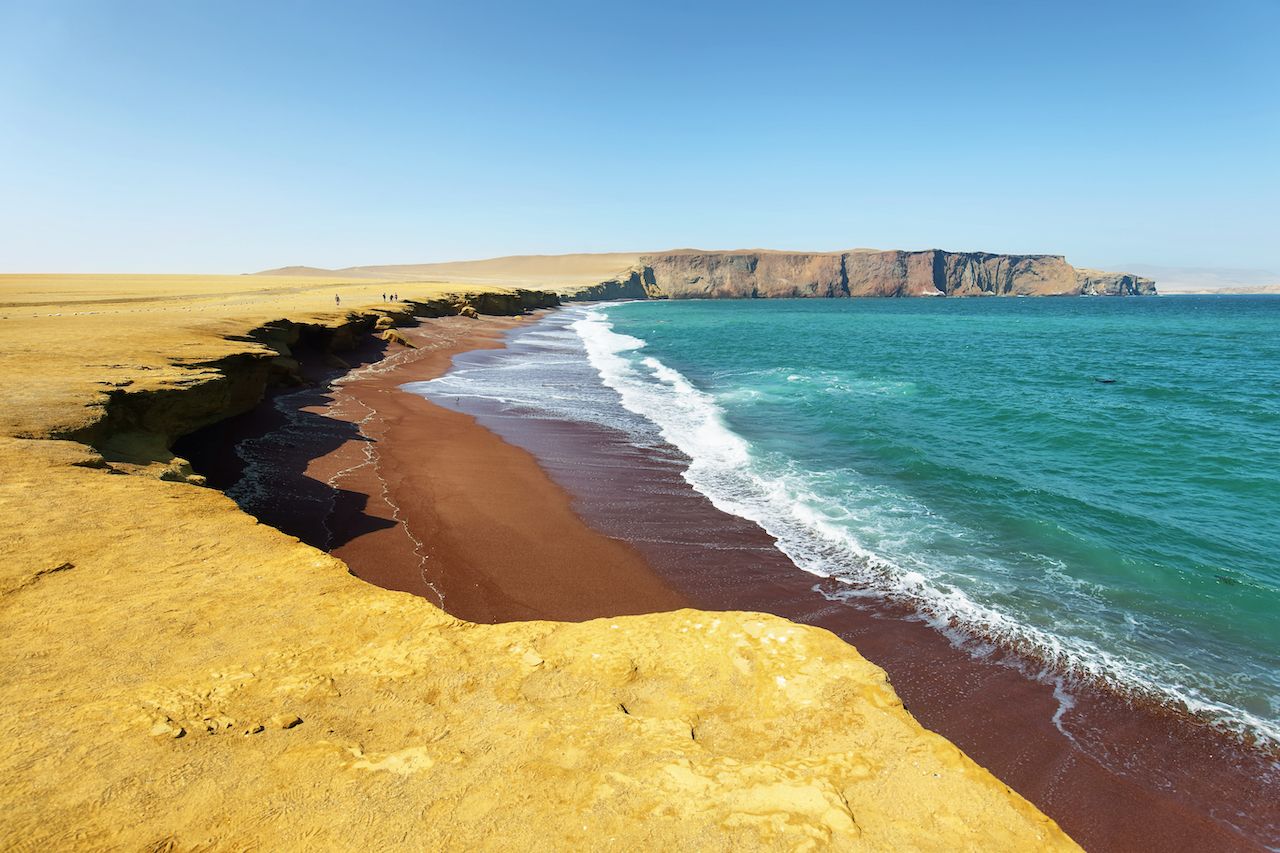 Despite having more than 1,500 miles of coastline, Peru does not usually top the list of places in South America listed as a beachgoers paradise — even though it has some stunning coastline. In fact, surprisingly few travelers visit Paracas, even if they are visiting Huacachina, a real-life oasis set amidst the sand dunes about 180 miles south of Peru’s capital, Lima. If you were to drive the four hours from Lima to Huacachina, you’d be passing very close to the bay city of Paracas. It’s worth the small detour.

Paracas is a popular beach escape for many Limeños, as residents of Lima call themselves, with luxury resorts, backpacker hostels, and everything in between. Despite the array of offerings, Paracas still has a small-town feel.

You can stay in the town of Paracas, and savor the happening, party atmosphere at the beaches closer to the city. But the real prize is just five miles away, where you’ll encounter totally isolated beach bliss inside the Paracas National Reserve. There’s next to no infrastructure here — it’s just you, the sea, and the sand. You could find yourself completely alone on endless sandy stretches hanging out with flamingos and dolphins.

If you opt to wild camp without services in the reserve, be sure to bring all of your own provisions. Alternatively, Bamboo Paracas is a great mid-range choice for accommodations. It’s the closest resort to the nature park and has eco bungalows and pools, along with windsurfing and paddle boarding. 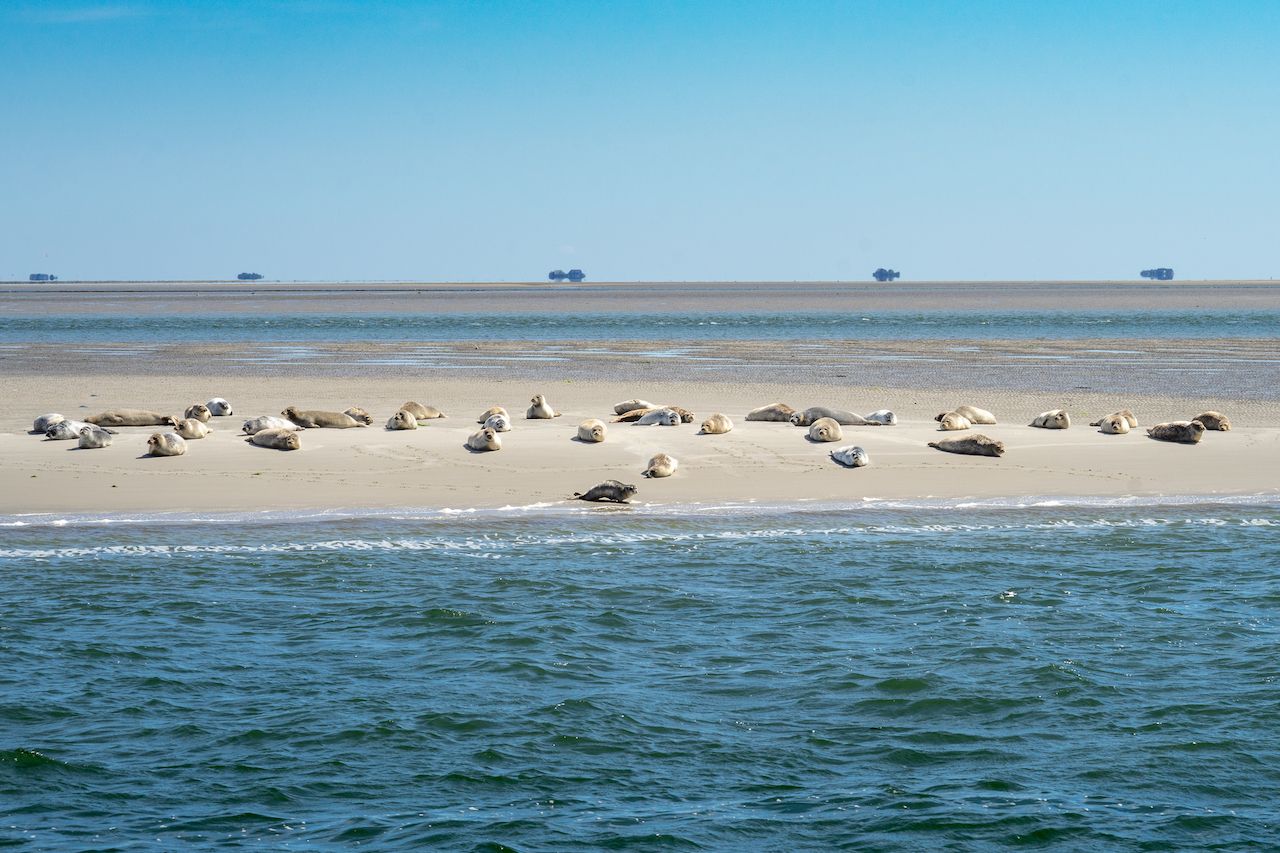 Like Peru, Argentina is not widely renowned for its beach scene outside of a few prime city escapes south of Buenos Aires. With a closer look, though, many travelers are delighted by the pristine coastlines of Patagonia. The sub-antarctic region is actually quite pleasant in January and February and is home to some of the most spectacular beaches in South America.

For starters, head to Puerto Valdes in the northernmost part of Patagonia and the only township on the Valdes Peninsula. Here, it’s all beaches, untouched nature, and rare wildlife encounters with creatures characteristic of the region like penguins, elephant seals, sea lions, right whales, orcas, and more.

The small-town hub offers just the right balance of nature and amenities, so you can stay comfortably with direct access to the best sights and sounds of the peninsula. Think snorkeling, paddle boarding, whale watching cruises, and safaris. A great, beachfront option that has earned plenty of recognition for its environmental practices is Oceano Patagonia. 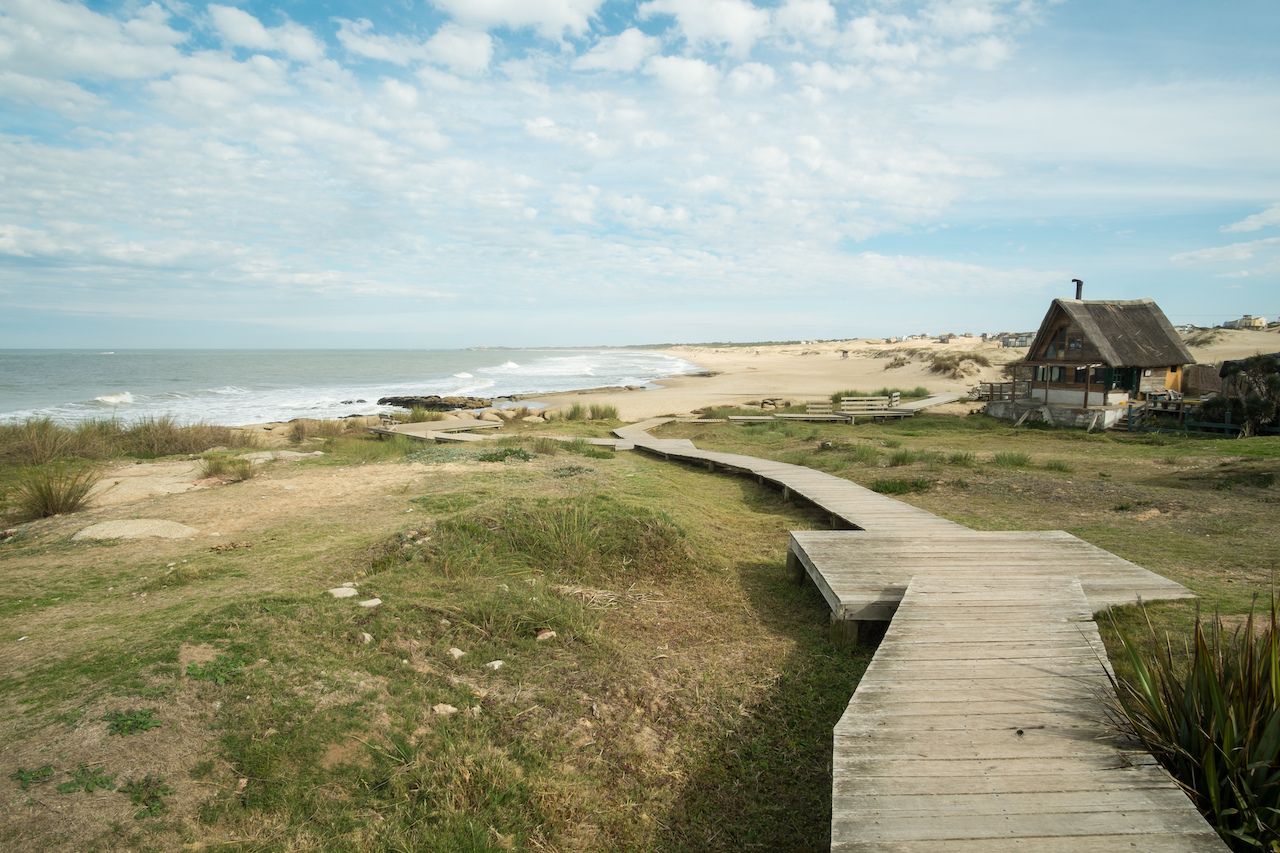 It’s no secret that Uruguay is a full-fledged beach haven and a great winter escape. The beaches of Punta del Este and Jose Ignacio are hotspots for wealthy Argentines and celebrities from the Northern Hemisphere who want to celebrate New Years Eve in the middle of summer.

But Uruguay also has some lovely, quiet stretches along its 410 miles of epic coastlands as well. Just note that since the country is so far south of the equator, summer is the direct opposite of the seasons in the Northern Hemisphere. It gets cold in its winter months, so time your travel when it’s deep winter up north. For the most part, the seaside is enjoyable from November to February, with the warmest days in December and January.

That said, the farther north towards the frontier with Brazil that you go, the warmer it gets. This is a blessing, since the most natural, easily accessible beach is in Punta del Diablo. In contrast to Punta del Este, this is one of those slow-paced villages perfect for doing nothing more than relishing the sand and sea — and maybe doing some surfing as well. You can get right onto that sand with a stay at the El Diablo Tranquilo hostel, which has dorms, private rooms, and a wide-open ocean view from its communal spaces. 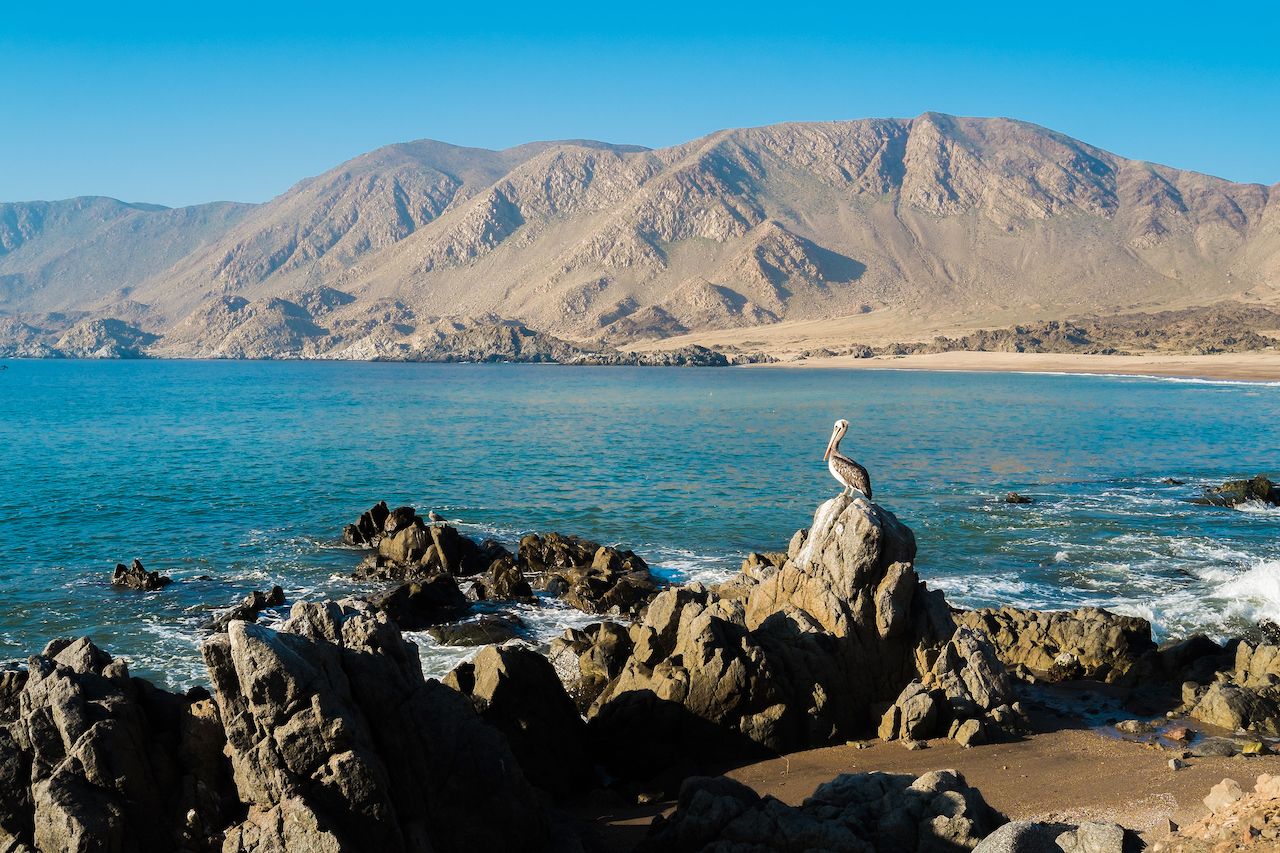 If you’d like to see a side of Chile not widely documented but overflowing with endless beaches, stick to the northern territories. This region feels like one of the most remote of this list. It’s worth the trek here if you combine it with a visit to the Atacama Desert. From San Pedro de Atacama it’s a seven-hour drive, but Chilenos are accustomed to driving long distances to get around their elongated country. .

Despite the fact that this is a coastal desert region, it’s cool here year-round, in part because of the chilly Humboldt current that flows north from Antarctica. The warmest days from December to February reach only into the upper 60s Fahrenheit. The massive Pan de Azúcar National Park is still a wonderful place to unwind and disappear into the scenery.

The beaches are stunning, isolated white banks with impressive views of the islands, cliffs, and mountains in the distance. It’s also prime territory for wildlife sightings ranging from foxes and chinchillas to Humboldt penguins, pelicans, marine otters, and sea lions. You’ll find many hiking trails and campsites, as well as cabanas and more camping options at the Pan de Azucar Lodge. Beyond that, there are few services except what is found in the small fishing villages. 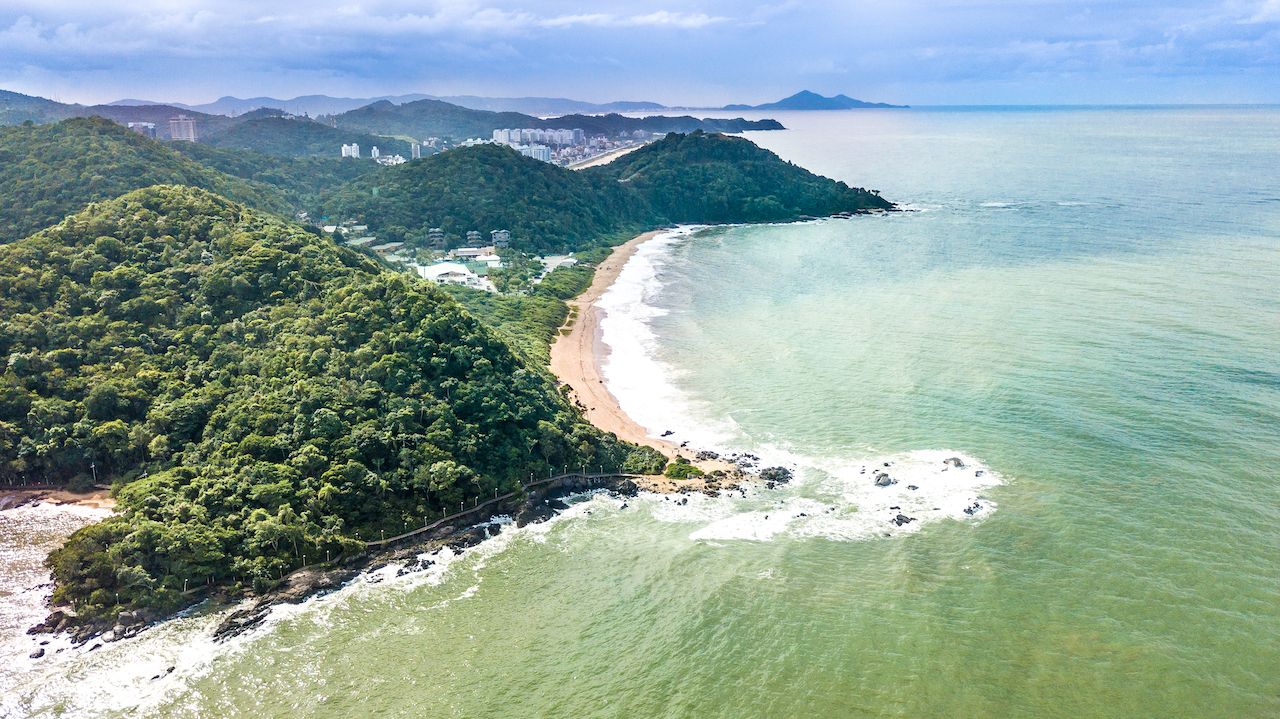 A list of South American beaches wouldn’t be complete without at least one nod to Brazil. When seeking out the least obvious places in Brazil, take a chance on the lesser visited southern regions. Many of them haven’t exploded with tourism just yet.

While Balneário Camboriú is not nearly as remote as other locations on this list, you can still beat the masses by heading to this coastal municipality that’s being touted as the new Rio. It’s a major resort city for Brazilian travelers, but the word hasn’t quite reached the international crowd.

The main beach at Balneario Camboriú is a lovely cove with an exquisite highrise skyline and everything you can dream of for an upper-class getaway. Many Brazilian celebrities are known to hide away here, which just adds to the allure. It’s not uncommon to see a yacht or two whizzing by. Among its appealing features are the oceanfront avenue filled with restaurants, bars, and shops, and the best electronic music clubs in the country. Plus it has bike lanes, boardwalks, playgrounds, and a whole mountain dedicated to adventure activities with a zip line and cable cars.

A 10-minute drive also takes you from the main beach to Praia de Taquarinhas, a stunning nook framed by lush greenery. You’ll feel a world away but won’t be far from Balneário Camboriú’s urban pleasures. There are countless places to stay, but a budget-friendly option within walking distance to the main beach is Pousada Villa di Loire.