If you’ve visited a ski resort in the last few years, you may have noticed signs stating “uphill access point” near the base. While riding the chair to your favorite runs, you might also have casually looked down at the skiers on the run below and noticed a few going against the grain — sliding, one foot in front of the other, up the hill — not schussing down it.

They’re actually doing this of their own volition, partaking in an activity called “skinning.” Those vested in the sport call it exercise. Many observing it for the first time call it “crazy.” But as ludicrous as this all may look as you soar overhead, the practice appears to be here to stay. Here’s the lowdown on skinning and how you can join in on the madness. 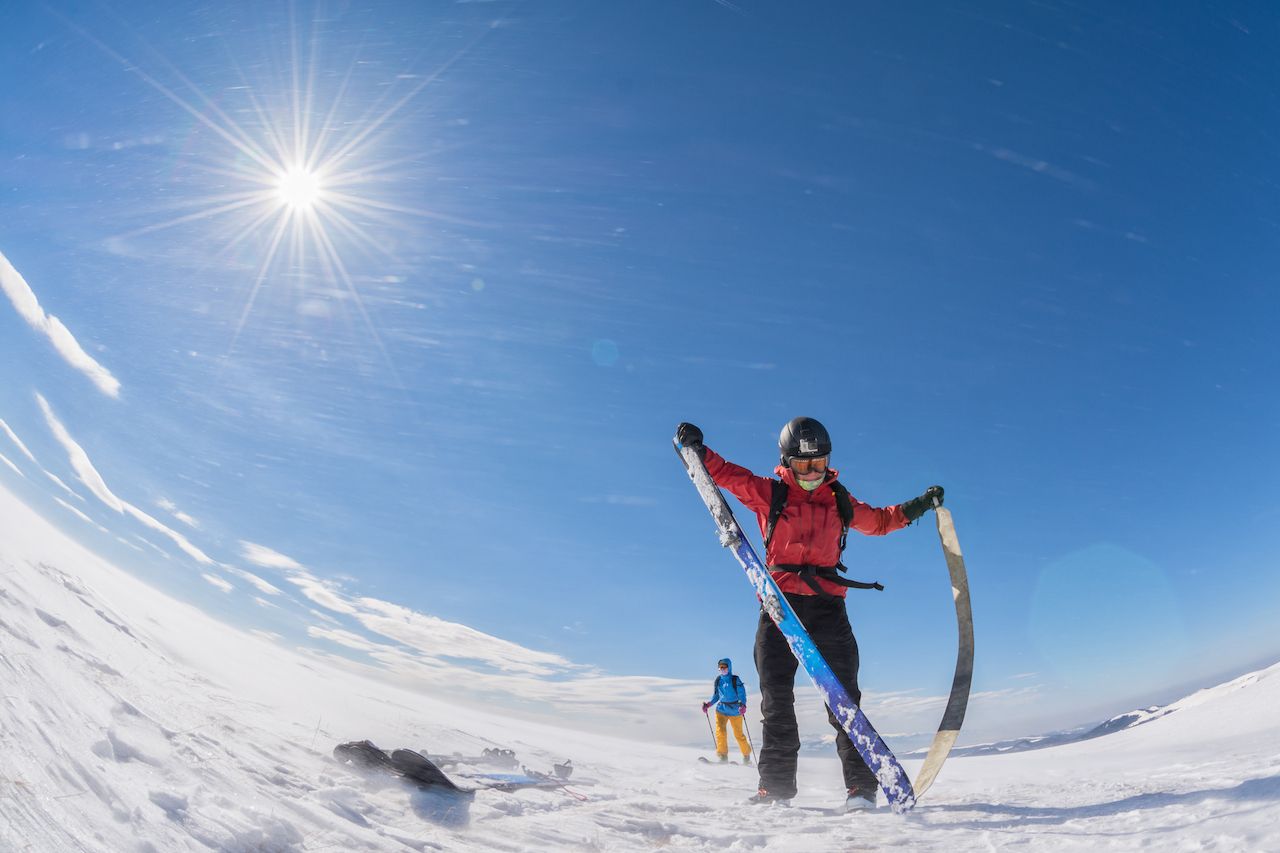 Skinning allows skiers, or snowboarders on “splitboard,” to better grip the snow when they are moving their skis or the two halves of their splitboard up a slope — by applying a grippy strip onto the bottom of their skis. The strip has an adhesive surface on the side in contact with the skis and a fuzzy surface on the snow-facing side. The adhesive is designed to grip firmly to a ski’s waxed underside but be removable when it’s time to actually descend by skiing.

“Skins” get their name from the seal hides that were attached to the bottom of skis back in the 1930s in order to prevent backward sliding. The hides have been replaced in modern times by nylon or mohair, made from Angora goats, or a combination of both materials.

Skinning was born in the backcountry, allowing skiers to move uphill on mountain trails to enjoy untracked powder. Yet it has now made its way in-bounds at many resorts despite the existence of alternative ways to get up the mountain — like chairlifts or gondolas — and often without the presence of untracked powder to serve as a reward for all the effort.

Ski resorts react to the practice. 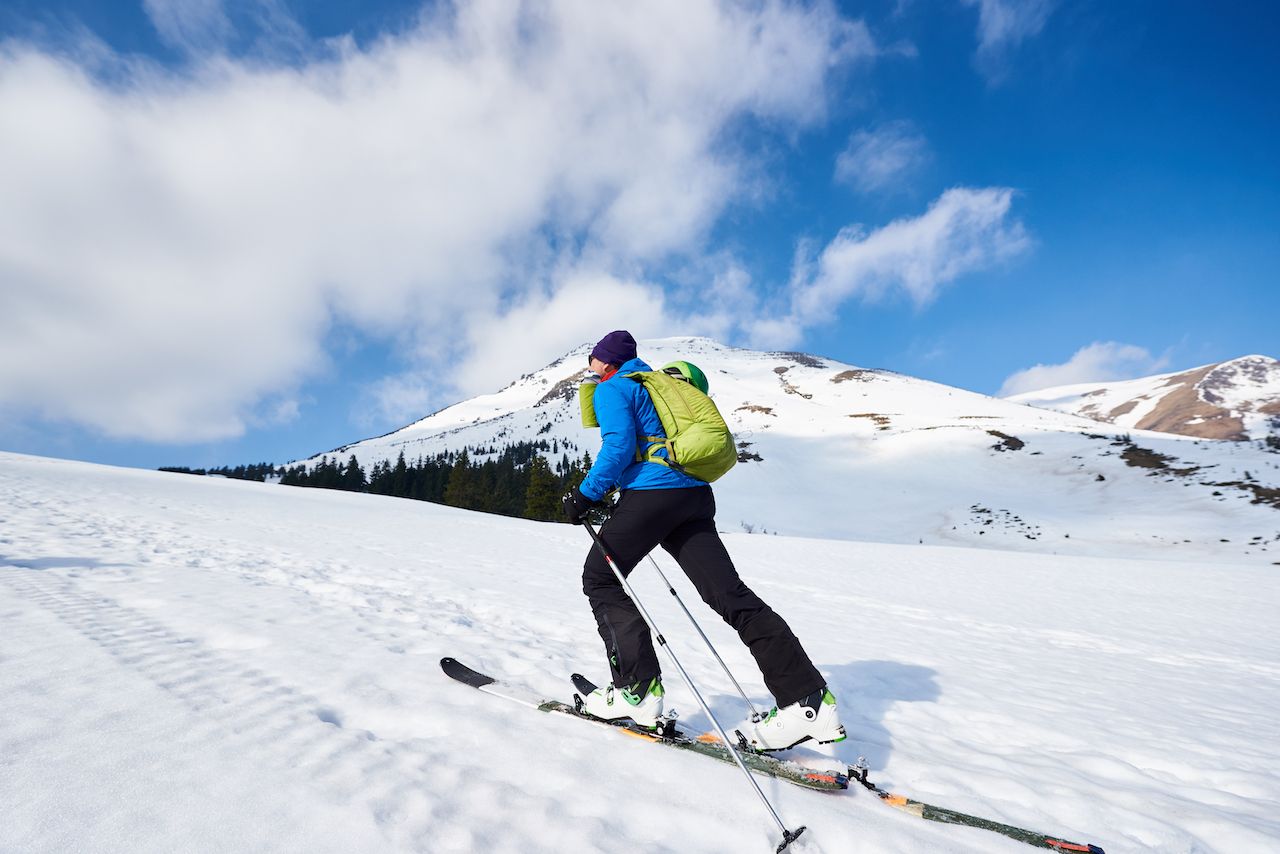 With skinning’s surging popularity, ski resorts across North America have adopted formal policies around it. Powderhorn Mountain Resort in Colorado has a dedicated skinning page on its website, which includes a map of permitted uphill routes. The resort, like many, requires uphill users to check-in at the base area and obtain a free “uphill use ticket” prior to setting out. It also disavows any responsibility for injury, stating, “The ski area welcomes and supports individuals seeking to exercise and enjoy the quiet mountain setting. However, all uphill travel is done at the individual’s own risk.”

Many resorts require uphillers to be on the mountain before the lifts open, often requiring skiers to set a pre-dawn alarm in order to get through their suffer-fest before the regular Joes begin loading at the base. New York’s Hunter Mountain Resort, for example, states that the resort “allows uphill access via skinning and snowshoeing during the winter operating season only two hours prior to operating hours.”

Other resorts are more cautious about permitting uphill access, and some consider the activity against their policy. If you plan to give skinning a try, check the website of the resort where you plan to go to make sure you’re aware of their rules.

In general, these diehards follow specified routes up the hill, often in what’s known as a “skin track” cut by previous masochists on the same route. Skinning is all about having a tranquil experience. The sun piercing through the crisp morning air as it rises over the peak ahead, the only noise being the “whoosh” of poles dipped in fresh powder and an occasional moose trotting by. It’s a skiers’ version of meditation, a way to truly connect with nature and slow down the pace of the sport they love. And because they’re moving so slowly up the mountain, they’re sure to be recognized — and rightfully congratulated for their unparalleled devotion — once they finally make it back down to the base lodge.

Not to mention the health benefits of all that cardio.

Save that lift ticket money for beer. 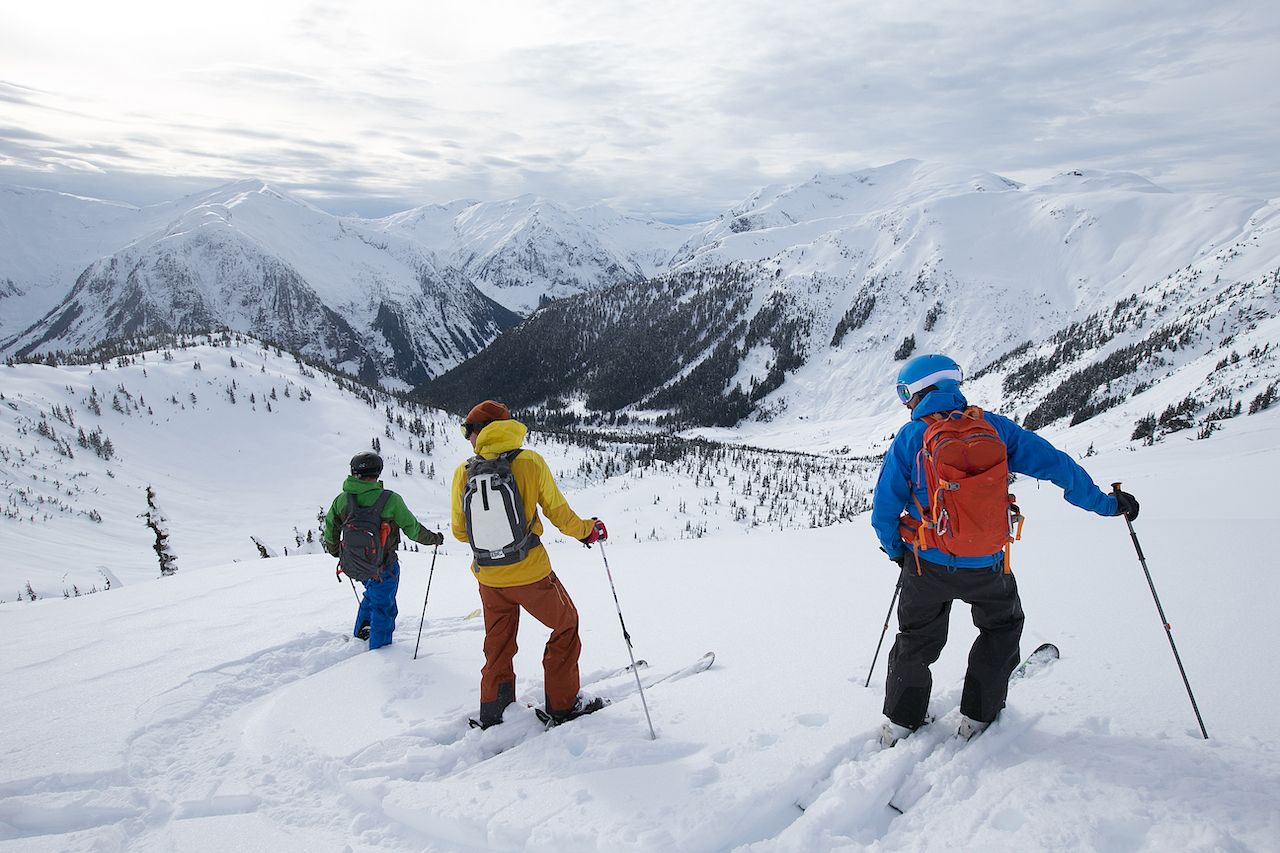 Skinning is a great exercise, for sure, but the real perk of the increasingly tolerant policies is that they generally allow for uphill access without buying a lift ticket. The retort to this could fall along the lines of, “Why are these crazy assholes allowed to ski the mountain for free while I have to buy a lift ticket?”

The answer lies in the question itself: The piece of paper or plastic you have secured to your jacket is a lift ticket. Because most ski areas operate terrain on leased federal land, those runs you’re skiing on are technically public property. The ticket gives you access to the lifts to ride to the top, saving the nightmare of hauling yourself up a mountain on foot, but in many cases doesn’t actually entitle you to any additional perks as far as trail access is concerned. Policies vary by resort, but in essence, what you’re paying for is convenience, as well as time since the time it takes to get uphill is time you aren’t actually skiing it.

Are these lunatics really that frugal? 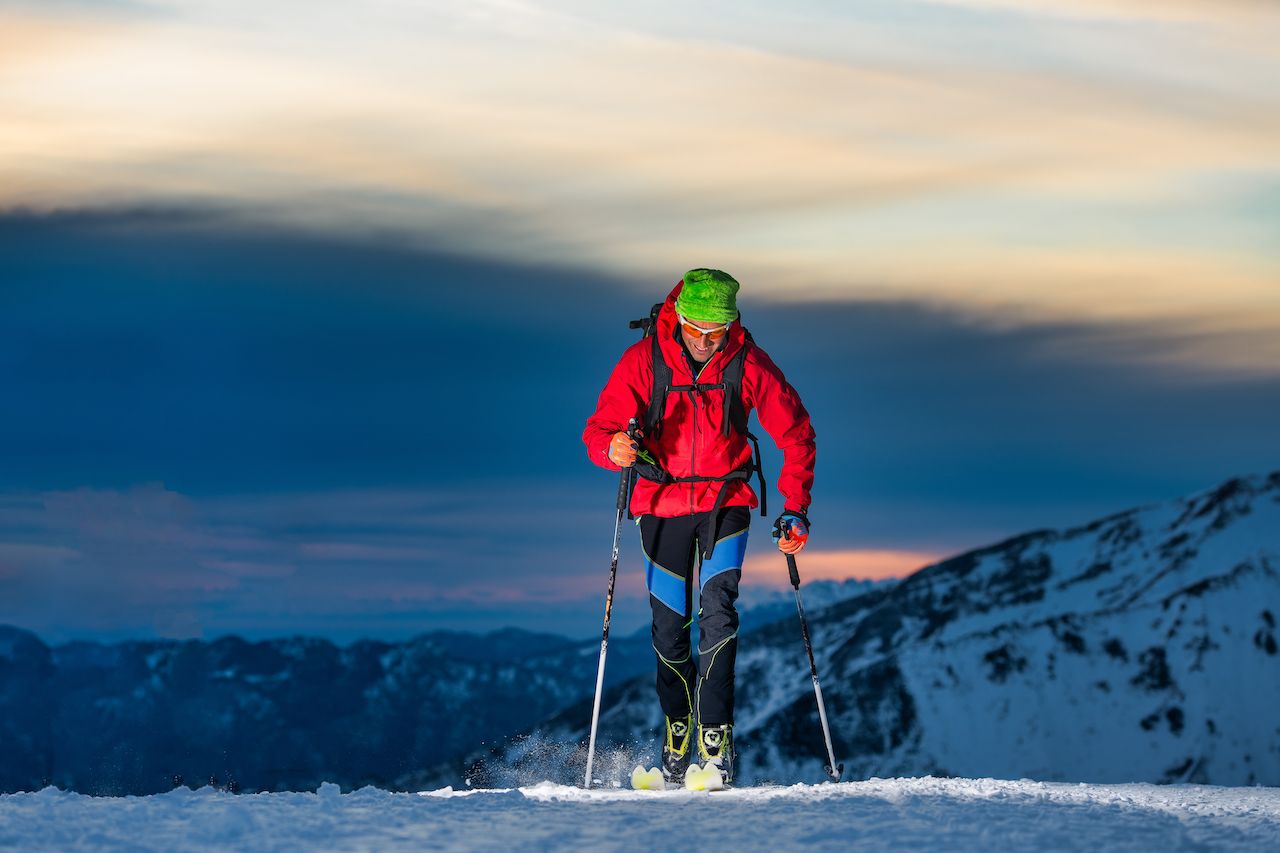 If you’ve ever lived in a mountain town, you’re likely aware of the tight budget constraining the lifestyle of the local ski bum. That liftie job might offer a free season pass, but the pay is less than sexy, and the hours spent standing outside on freezing winter days can be brutal. Likewise for much of the town’s hospitality sector, and they may not even be entitled to the free season pass.

It would make sense, then, that skinning up the mountain could make for a solid way to enjoy the slopes while keeping some dough in his pocket. Why would you spend $100 on a lift ticket when that money could go so far at the bar in the lodge?

There are also plenty of people attracted to uphill skiing for other non-financial reasons. Some people who could afford a lift ticket opt to spend the day skinning uphill because they want to “earn their turns.” Uphill skiing is another hardcore pursuit for the same folks who in warmer months would be jumping on their Pelaton, dashing off to Soul Cycle, or spending their day at their local CrossFit.

This excellent exercise also gives you the rejuvenating feeling of being outdoors — without having to use a mechanized, energy-consuming chairlift and without the avalanche risk of off-piste or backcountry skiing.

A checklist for uphill ski nuts 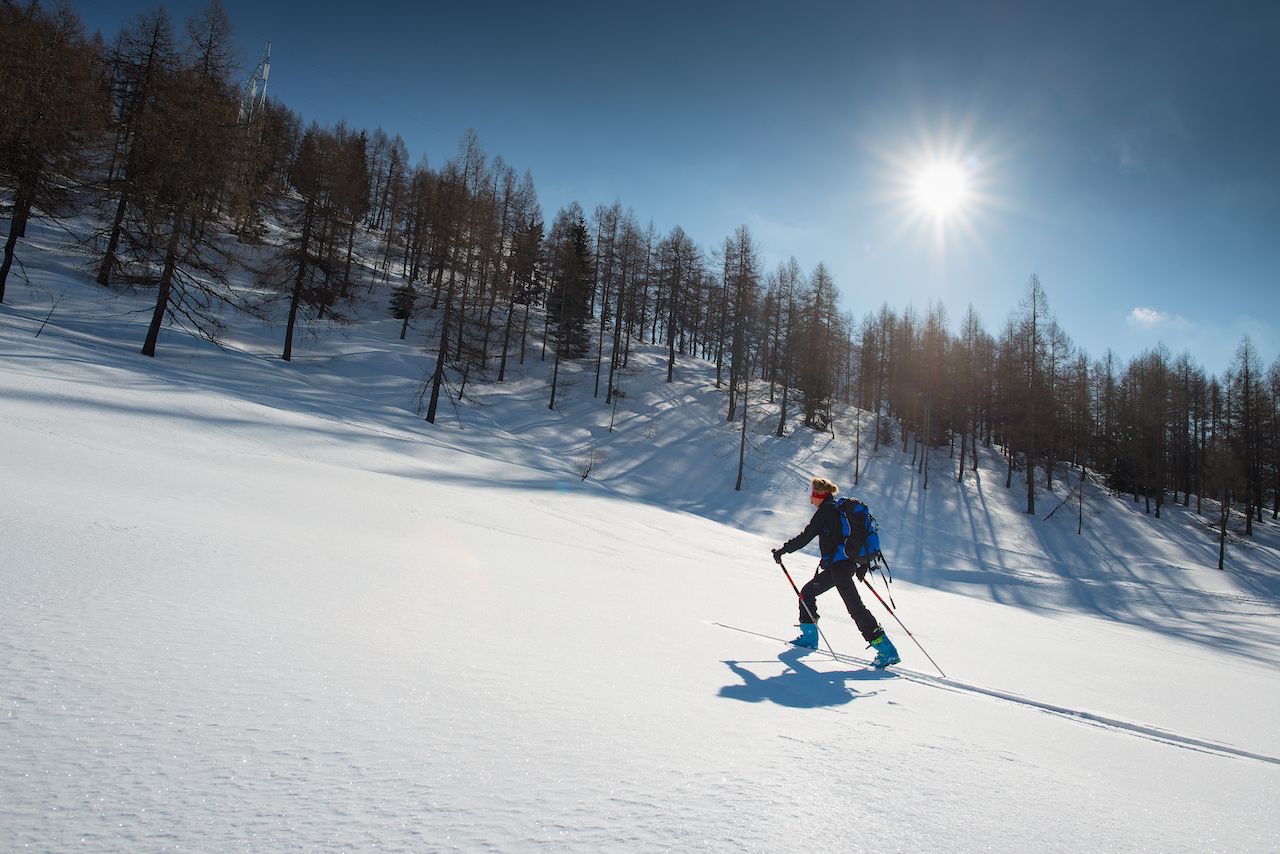 General best practices for uphill skiing within resort boundaries include making sure you are visible to those above you. Don’t stop at the bottom of a roller or make wide cuts across the center of runs when skiers are coming down. When possible, begin your ascent prior to the time that lifts open. Also, you’re still subject to the same terrain closures as everyone else. Just because you earned your turns doesn’t give you permission to duck ropes.

As long as you agree to these rules, and are okay with the possibility of being laughed at, here’s what you need to get started.

HikingThese Winter Hikes Are Actually Better in Cold Weather
Tagged
Ski & Snow
What did you think of this story?
Meh
Good
Awesome