In the 1920s, America was in the middle of a breakfast war. The combative parties were split by class and location: rural farmers on one side and post-Industrial Age city dwellers on the other. The former had a stubborn insistence on the way things have always been done, the latter was adapting to what they’d seen around the world as favorable economic conditions created a new travel class. The outcome changed the way people pay for and eat in hotels across America and the world — even in the cities those rural farmers lived.

“Now, however, red-blooded Americanism is rising in protest and it appears that the alien — whose name is Continental Breakfast — is in danger of being deported as an undesirable,” someone wrote in an anonymous op-ed in Washington, DC’s Evening Star on September 11, 1922. “Seventy-three percent of the American doctors appealed to in the matter by a medical journal have declared unequivocally for American breakfasts for Americans. And their editorial fellow citizens are supporting them almost to a man.”

The writer was railing against the foreign concept of a simple and fast breakfast. One of the many things that Americans kept after breaking ties with England was the hearty English fry, or full English. The dense caloric mass of toast, sausage, eggs, and beans translated to a meaty and protein-rich breakfast in the American heartland. In Victorian England in the mid-1800s, however, eating habits were changing in favor of the quick breakfast bites preferred by those in France, Italy, and the rest of continental Europe. Or as the English simply called it, continental.

As travel became cheaper (at least by 19th-century standards), an increasing number of English and continental European travelers visited America. They stayed at hotels that served huge heaping portions at breakfast, and, as was custom at the time, the travelers were expected to eat their meals at the hotel because the meals were included in the price of the room. Only, those travelers didn’t want all of that food. To appeal to the Europeans, hotels started offering self-serve plates of room-temperature food like bread and fruit. The hotels also switched to the “continental” pricing model of breaking the cost of a meal off of the cost of the room.

As hotel advertisements spread the word about this European way of taking breakfast and traveling, it was met with resistance. 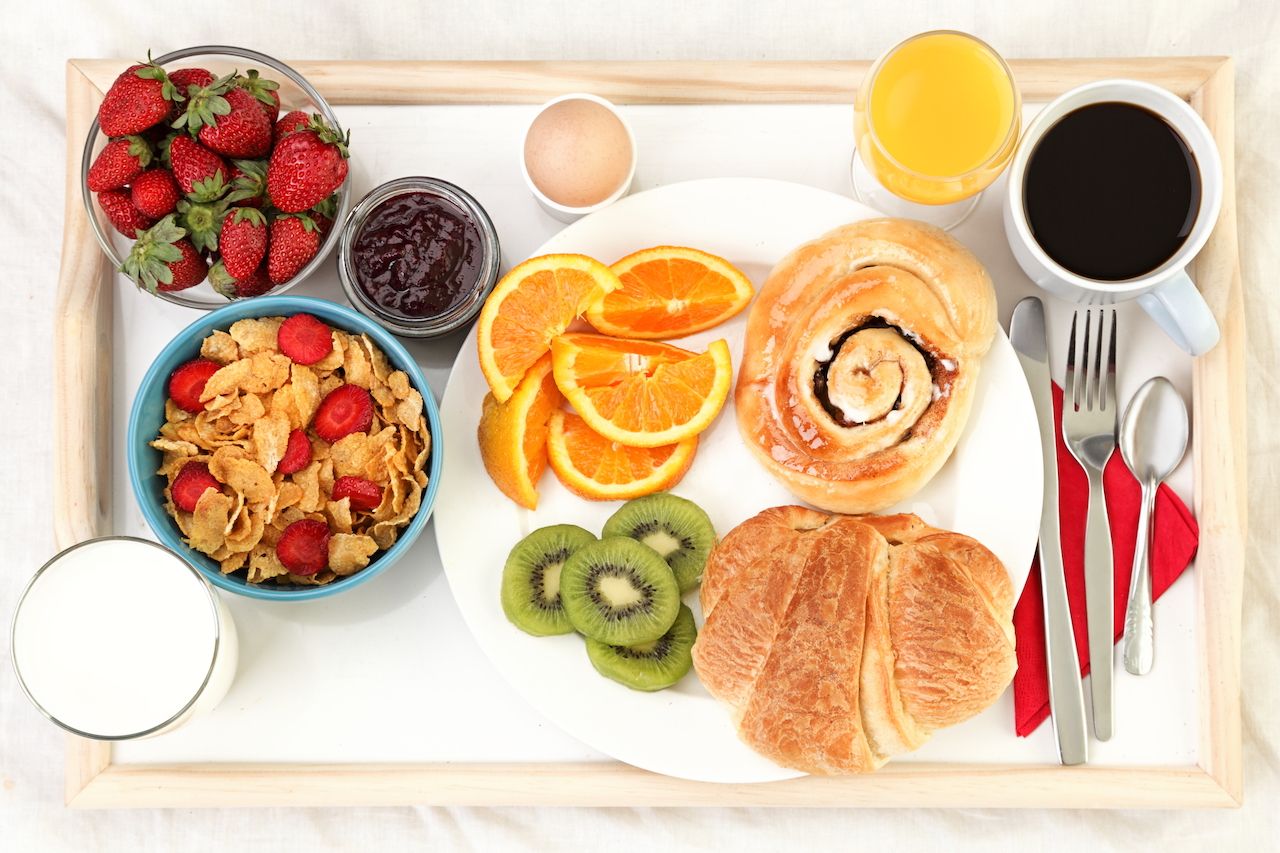 A quick search in the Library of Congress’ newspaper archives that date back to 1789 shows the first appearance of “continental breakfast” as we know it was in an American paper in 1883. The story, published in Little Falls, Minnesota, detailed a doctor’s trip through Mount Vesuvius in Italy and his breakfast of bread, coffee, and butter. From there, mentions increase, most of which aren’t exactly complimentary.

A story from 1887 called breakfast at a continental hotel “a slight affair,” and that “Americans generally complain bitterly of the difficulty of getting a ‘decent’ breakfast.” A Harper’s Weekly story from 1896 looks back fondly at “Breakfast in the Old Days” before “European travel” wrought its “depleting effect upon that fine old institution — breakfast.” It continued that pie should be brought back to the breakfast table, “and the ‘Continental breakfast’ should be banished from a hemisphere where the Monroe Doctrine and the pie should reign supreme.”

So the war raged and the thinly veiled xenophobia and open ethnocentrism continued in the papers. But by the 1930s, open-minded travelers were winning out. Hotels listing continental breakfasts as a main attraction were advertised as far up as Vermont. After World War II, the expanded highway system led to small roadside towns that had hotels lining the main roads through. Hotel chains like Best Western and Hilton came up in the 1960s and ‘70s. Continental breakfasts were easy for on-the-go drivers and, perhaps more importantly, cheap for hotels. To this day, online booking sites and flashing hotel signs give travelers insight into the light fare they’ll get in the morning. 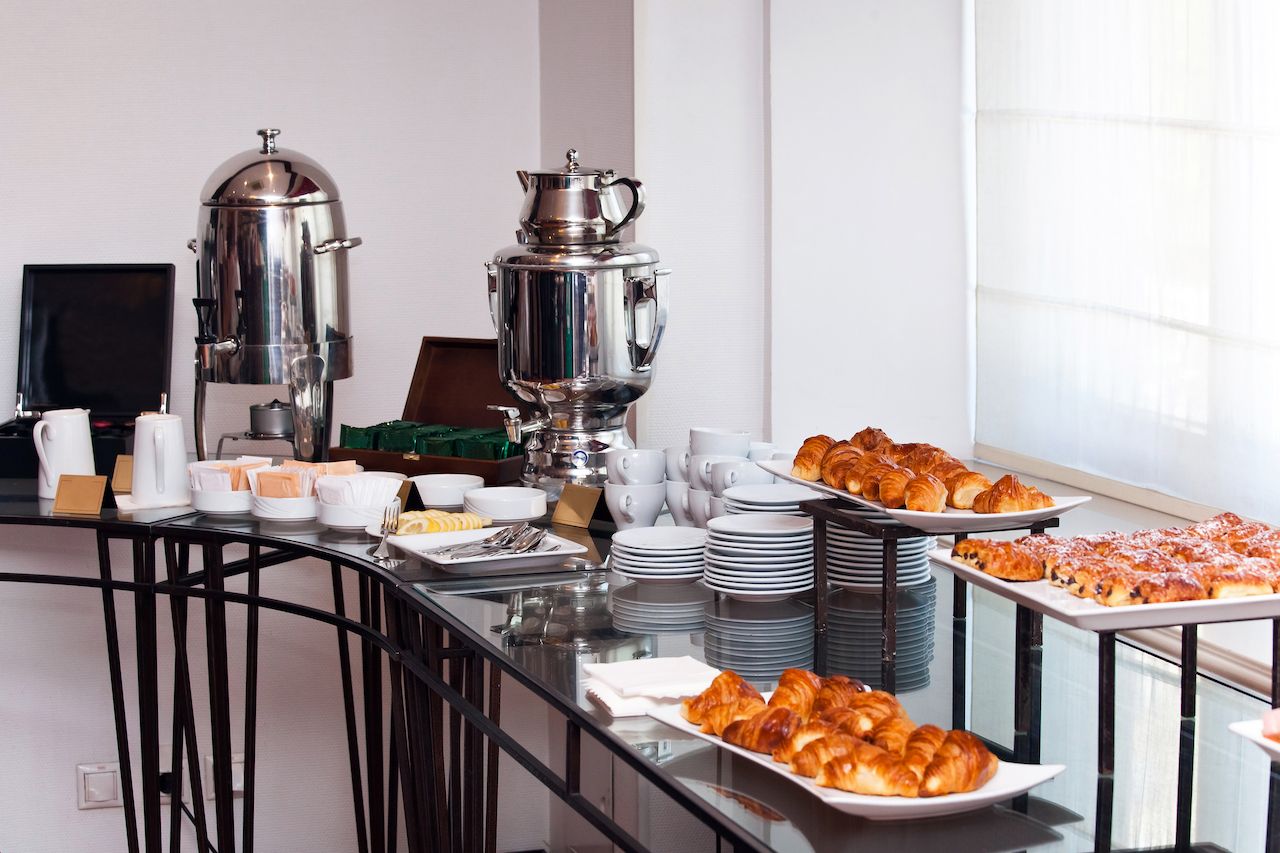 Americans have accepted the idea that cereal, plastic-wrapped bagels and muffins, and some fruit (sometimes fresh, often canned) constituted the de rigueur American hotel breakfast. What used to be associated with un-American coastal elites in the cities started to become looked at as the cheapest possible option and only exciting for people who don’t get out much. So much so that a skit on Key and Peele from 2013 lampoons a businessman confronted with a hotel continental breakfast who looks at the spread and says, “All the European countries lay before me, where should I fly to first?” Then he proceeds to eat a “Danish, clearly from Brussels” before exclaiming, “I love being incontinent, it’s a delight for the senses!”

In a way, it’s a sign that the American war over continental breakfast continues. Only this time, “the alien whose name is Continental Breakfast” is as assimilated into America as apple pie.

Spirits + CocktailsHow Minibars Went From Dismal To Dead To Better Than a Real Bar
Tagged
Food + Drink
What did you think of this story?
Meh
Good
Awesome