Strip away SoMa’s startups and what’s left of the Haight’s hippie havens, and you’ll find what makes San Francisco so special underneath it all: a picturesque, peninsular location that defines the city as much as its arts, tech, and politics. It’s the City by the Bay, after all, where islands are staple attractions, boating and boarding come in all shapes and sizes, and even committed swimmers brave the waters, which rarely warm up past 60 degrees Fahrenheit.

Late summer and early fall offer the best weather for most water sports, but you’ll see locals paddling around the bay and surfing the city’s beaches year-round. Consider joining them out on the water next time the sun peeks out from behind the fog, Karl, which like any self-respecting resident of the city that hosts Twitter has its very own account. Here are eight ways to enjoy the San Francisco Bay, and beyond, up close. 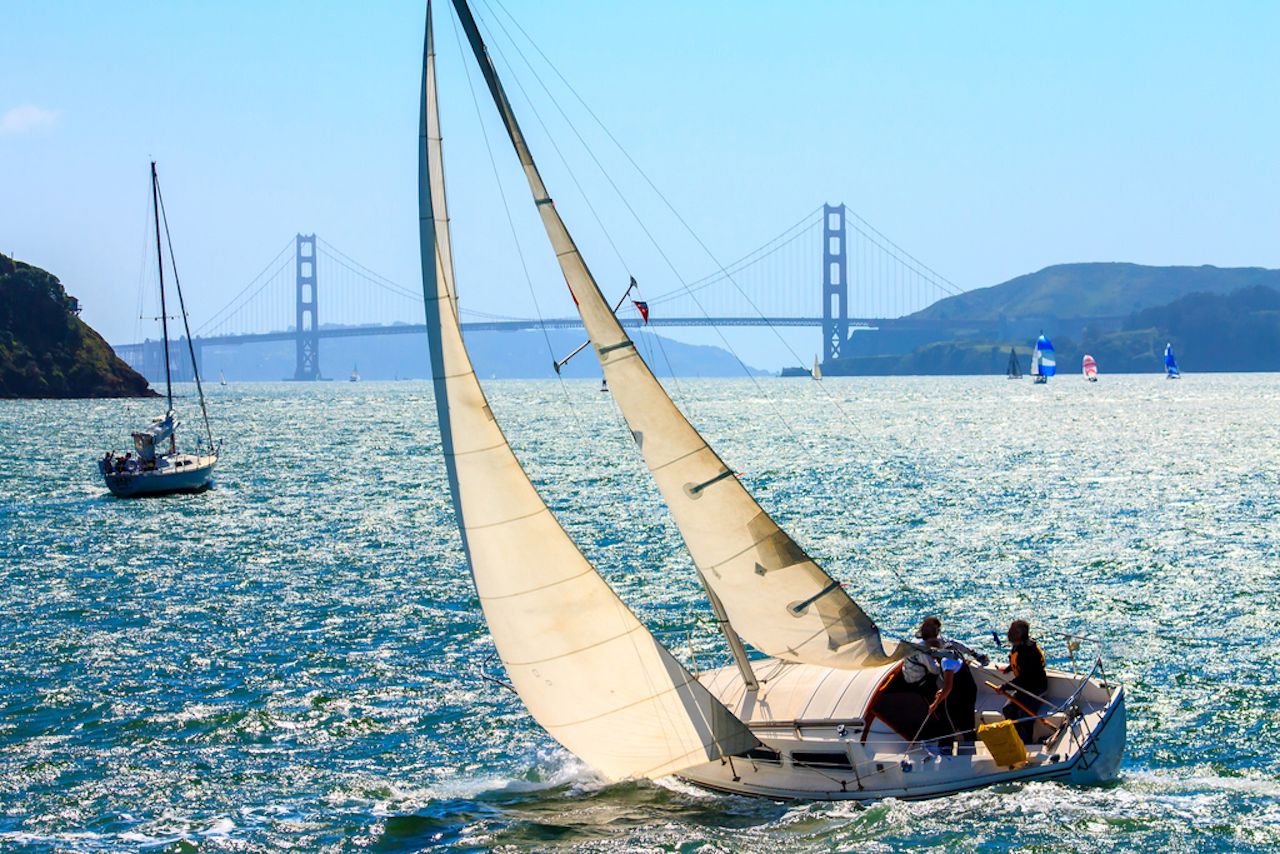 Over time, San Francisco parlayed its maritime roots into an internationally recognized sailing culture. The city’s yacht club was founded in 1869, regular regattas see sailors tear across the bay throughout the warmer months, and SF even hosted the America’s Cup in 2013.

Thankfully, you don’t need a captain’s license to go sailing. The San Francisco Sailing Company runs the gamut from private yacht charters to surprisingly affordable 90-minute tours. Captain Kirk’s is another popular operator that offers pickups in Sausalito and Oakland, as well as SF. For a zippy catamaran ride, look to Adventure Cat Sailing Charters. For something special, experience racing speeds on the USA 76 Challenger yacht, which competed in the 2003 America’s Cup in Auckland, New Zealand, with ACsailingSF.

If your interest in sailing goes beyond breathing in the sea air from the bow of a boat, both the San Francisco Sailing Co. and Captain Kirk’s offer lessons, as does OCSC Sailing in Berkeley.

2. Cruise around the bay. 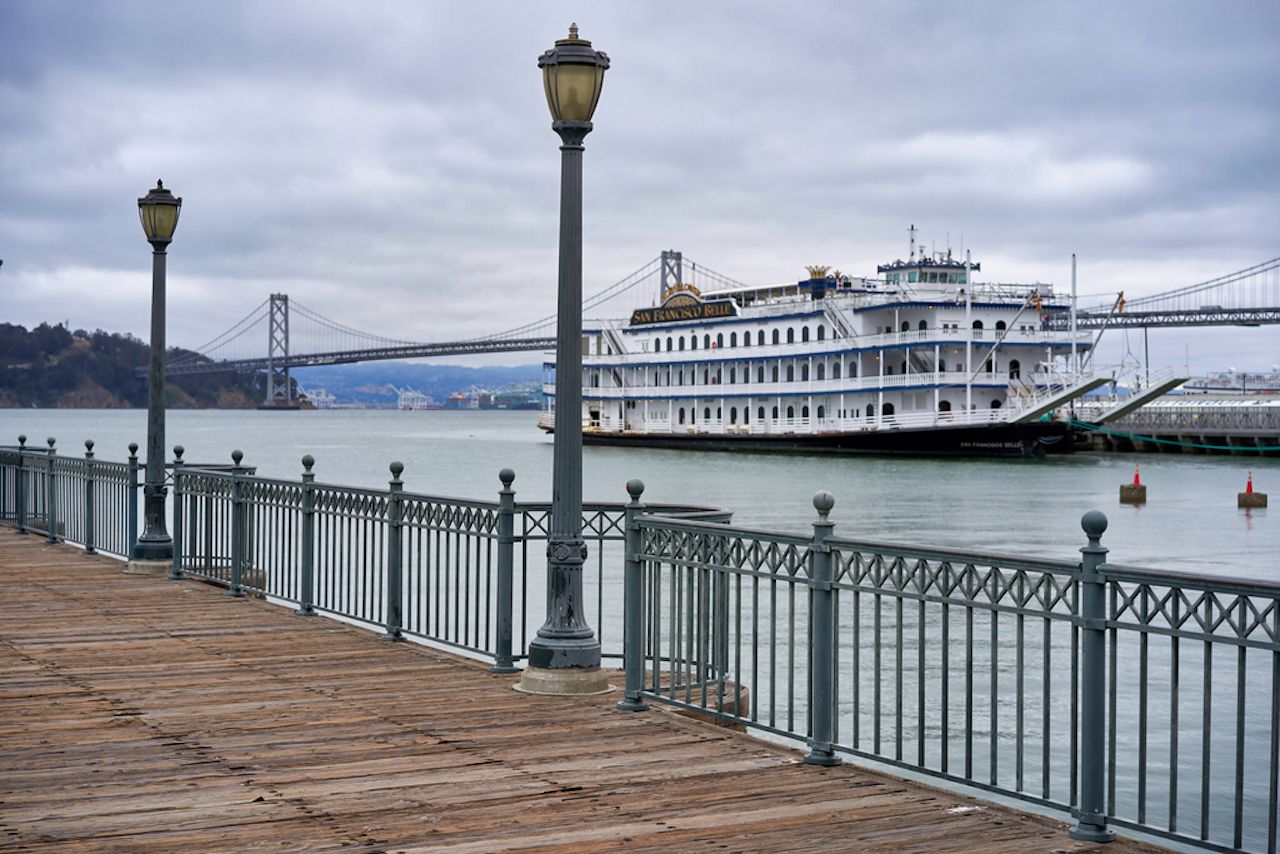 Sailing doesn’t agree with every budget, but boating doesn’t have to be cost prohibitive. Hornblower Cruises caters to the foodies in town with lunch and dinner cruises, Champagne brunches, happy hour and cocktail cruises, and more, starting at as little as $35. Operating out of Pier 39, the guilty pleasure of SF’s tourist hits, the Blue & Gold Fleet offers hour-long bay cruises that double as sightseeing excursions, even incorporating the city’s famous lounging sea lions, for a reasonable $34. Ninety-minute sunset cruises are a fun alternative, not only ushering cruisers under the Golden Gate Bridge but also yielding spectacular views of the Bay Bridge aglow in LED lights after dark. It’s the second-best thing to watching fireworks explode over the bridges from the water on the Fourth of July. 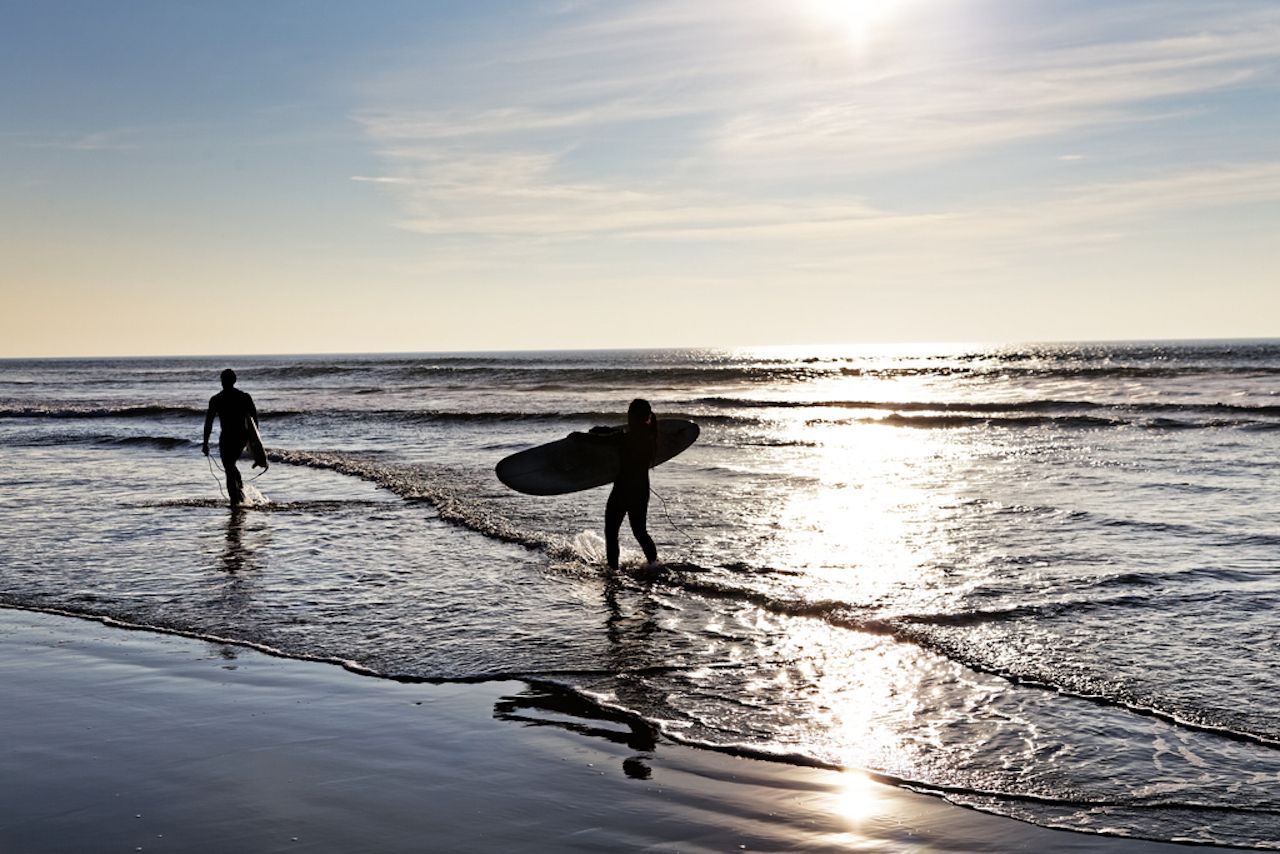 You have to be pretty dedicated to surf San Francisco’s waves. The water’s cold, which a wetsuit can fix, but neoprene doesn’t protect against rough breaks, rocks, or rip currents, all of which mean the city’s beaches are best left for advanced and expert surfers.

For advanced surfers, Ocean Beach is the safest bet. The lineups at local favorites like Fort Point, which looks directly up at the Golden Gate, and Dead Man’s Point are always crowded, and territorial locals can get aggressive with newcomers. Out-of-towners will have no problem at Ocean Beach provided they’re experienced surfers — the paddle out is tricky, and the world-class waves can get big when they aren’t blown out, especially in fall and winter.

Park south of Sloat Boulevard to ease into the Pacific surf, then work your way toward Kelly’s Cove and the iconic Cliff House restaurant. Later, refuel with coffee and fresh pastries at the Devil’s Teeth Baking Company on Noriega Street, a local favorite in the Sunset District.

San Francisco itself doesn’t go easy on new surfers, but there are plenty of beginner-friendly spots within a short drive, the Bay Area’s increasingly heavy traffic notwithstanding. Just north, Marin’s Bolinas Beach has gentle breaks for longboarders, and down in Pacifica, Linda Mar is a solid choice for all levels, with easier waves on the beach’s south end.

4. That includes windsurfing and kitesurfing. 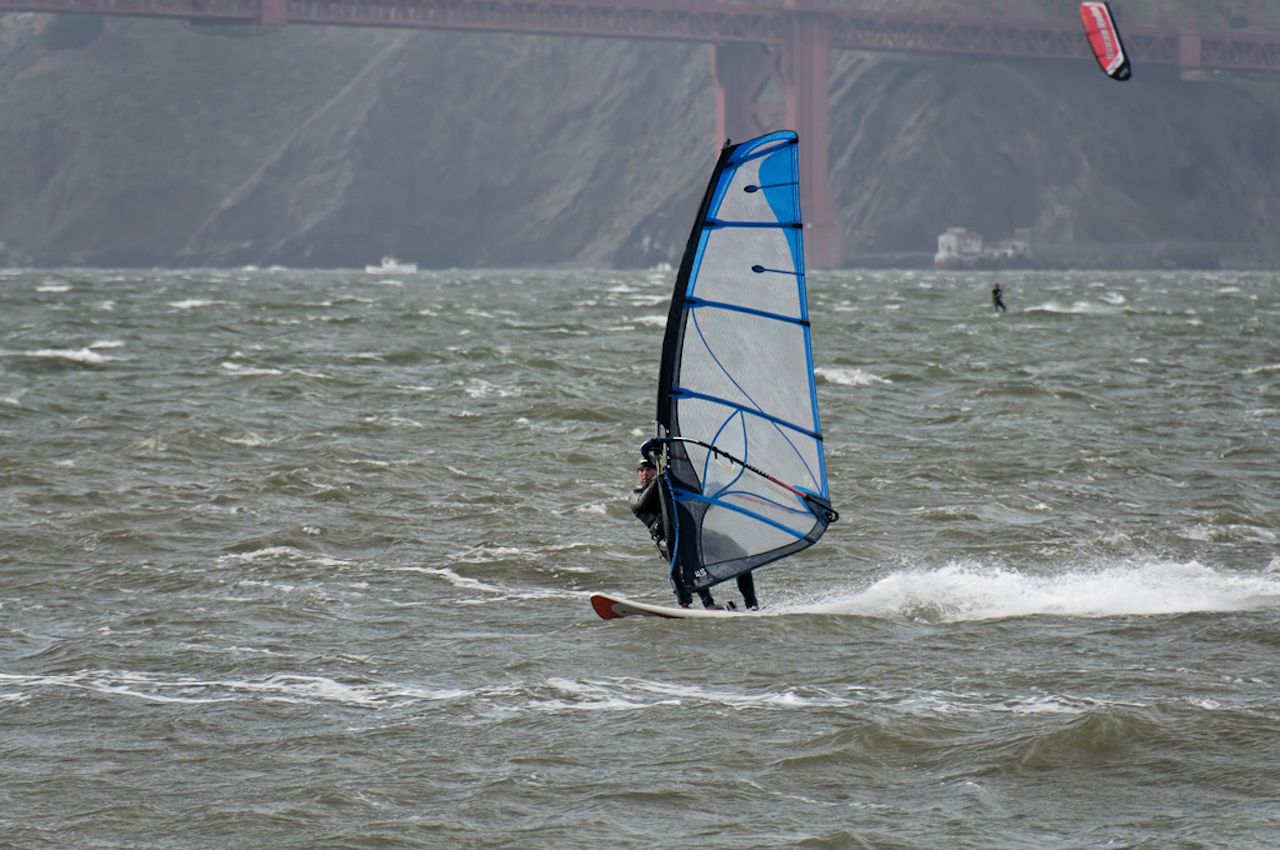 An outdoorsy lot, San Franciscans don’t waste their waves. Not everyone surfs, but most locals have probably tried at least one sport involving a board and the bay. Ocean Beach is big enough for all surfers, but windsurfers and kitesurfers can also snag optimal views of the city’s iconic, rust-red bridge from Crissy Field — taking off from Crissy’s East Beach once the afternoon winds pick up. Those willing to travel a half-hour outside SF will find arguably the top windsurfing spot in the whole Bay Area at San Mateo’s Coyote Point. 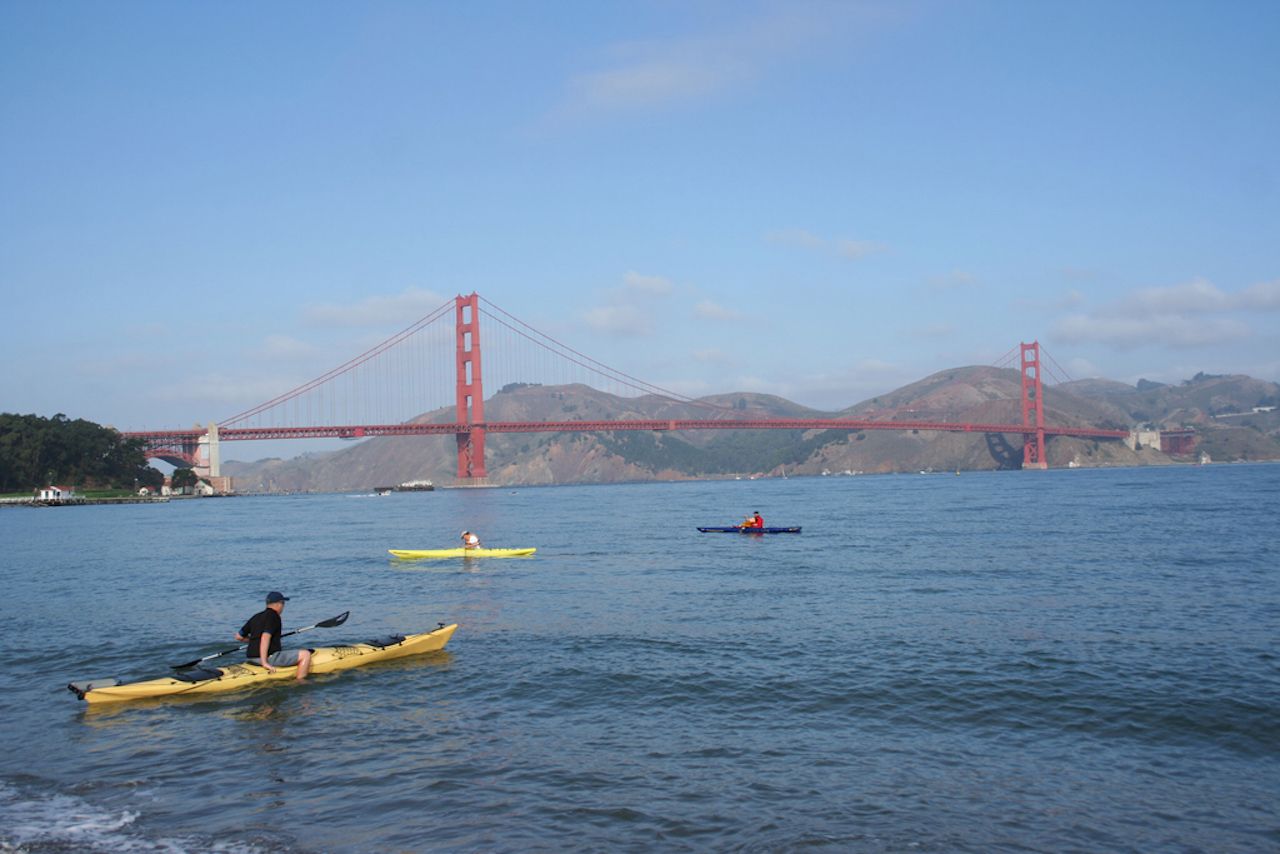 Easier than surfing and less expensive than sailing, kayaking is a great way to get out on the water, no matter the season or circumstance. Operating out of South Beach Harbor off Pier 40 — which ironically isn’t near Pier 39 but farther down the Embarcadero near the Oracle Park baseball stadium — City Kayak has you covered for rentals. Beginners can follow guides through McCovey Cove beyond the stadium’s right field wall, around the Bay Bridge, and along the historic waterfront during the day or at twilight. More experienced kayakers can tour the Golden Gate Bridge, Alcatraz, and Treasure Island, even arranging to paddle out under the full moon. Guided tours start at $54 an hour. 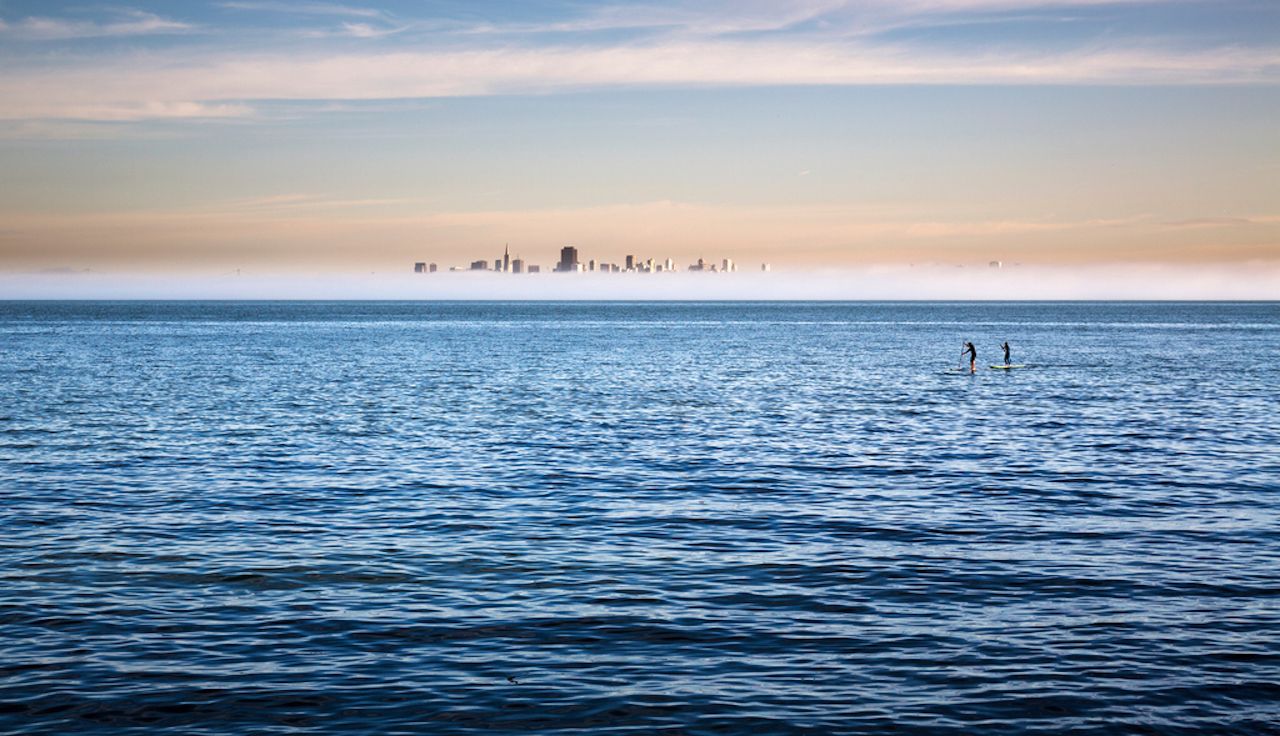 Stick around South Beach Harbor after kayaking for a SUP excursion, once again thanks to City Kayak. Alternately, secure a rental and set out in Aquatic Park not far from the landmark Fisherman’s Wharf neighborhood and even closer to Ghiradelli Square. The water is calm, and the bridge and island views are unbeatable. Depending on where you end up, Boardsports California is another option for paddleboard rentals with one location in SF and two in Alameda, about a half an hour away by car. 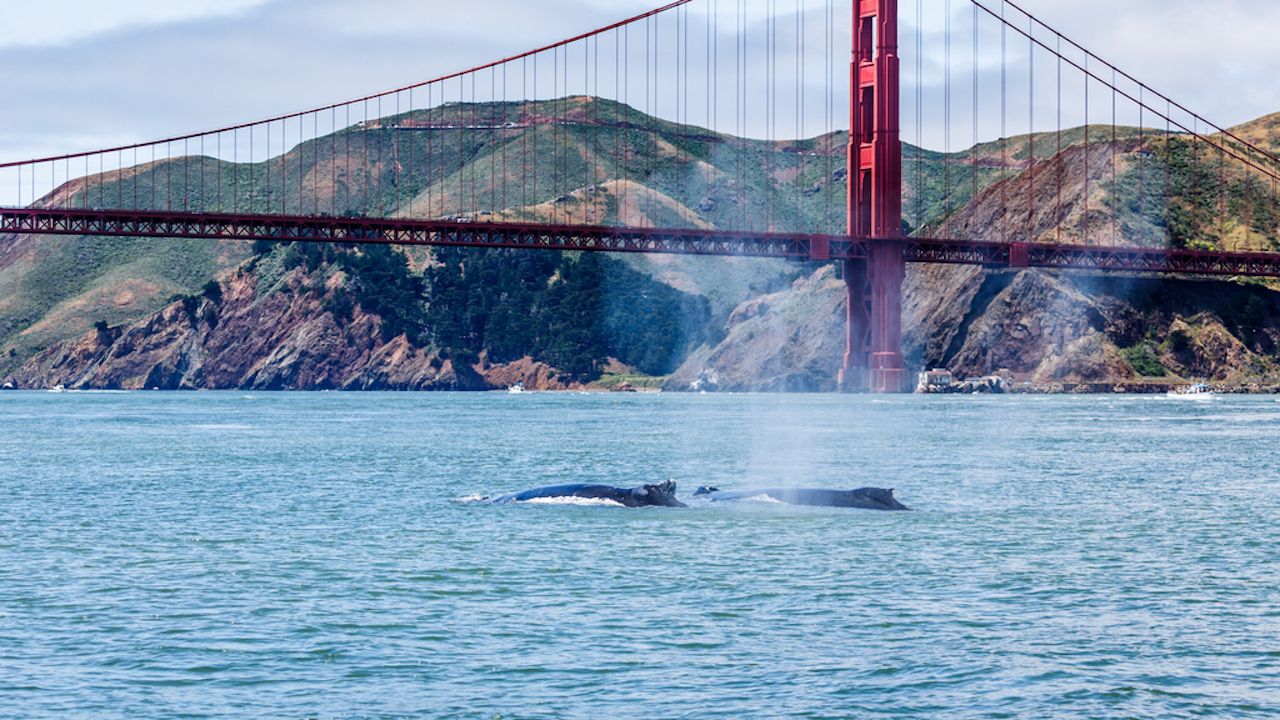 San Francisco has two whale-watching seasons: December through April, when migrating grey whales grace the bay, and summer and fall, when you might spot blue or humpback whales. Sightings are possible in the SF Bay, but the most reliable whale watching happens about 30 miles offshore around the Farallon Islands. There, the excursions are just as much about the rest of the wildlife, which includes dolphins, seals, sea birds, and even sharks. Farallon Island tours generally depart from Pier 39. Prepare for a full day on the water, and remember that classic SF packing advice: bring layers.

8. Ride at least one ferry. 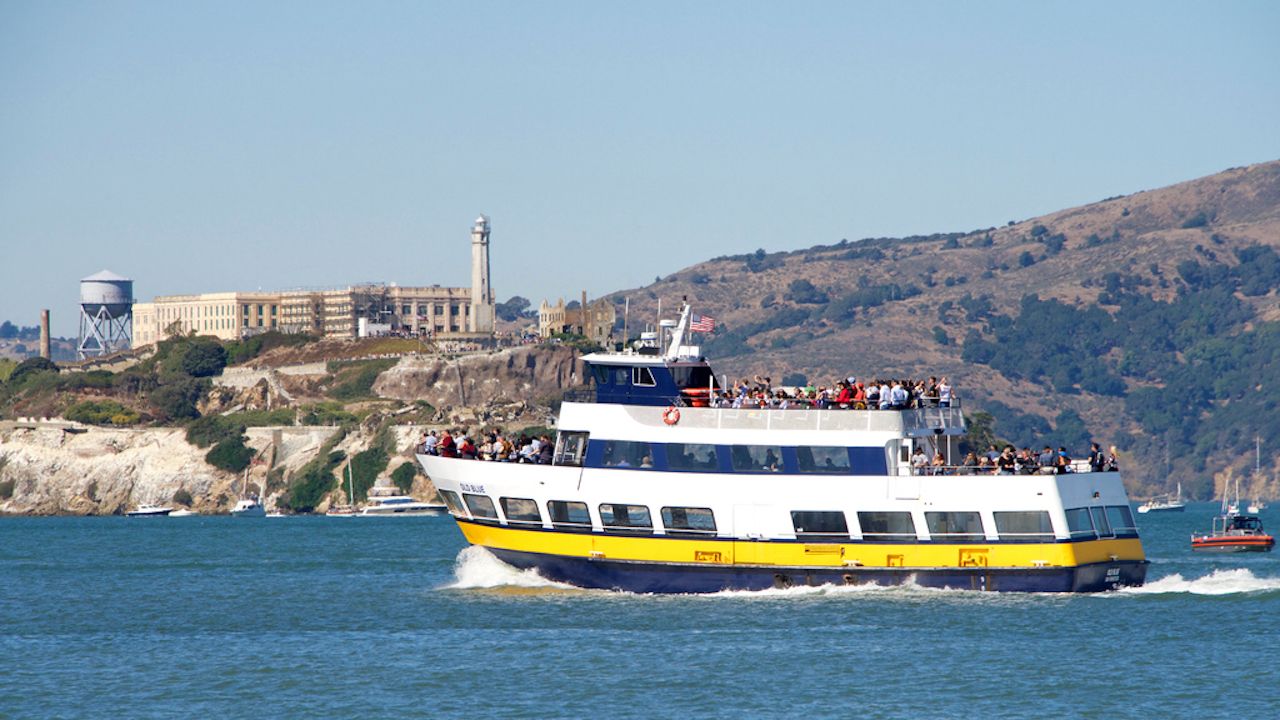 Work your way through the essential SF checklist and you’ll invariably end up on a ferry to Alcatraz. Possibly even a second headed for Angel Island, the largest natural island in the bay. But like the city’s cable cars, ferries are good for more than just commuting and shuffling tourists around — they also provide a panoramic perspective of the city.

You could easily make a day trip out of the half-hour ride to Sausalito on the Golden Gate Ferry or Oakland’s Jack London Square on the San Francisco Bay Ferry, kicking things off with brunch at the SF ferry building, which is brimming with local treats like Cowgirl Creamery cheese and Hog Island oysters. It also hosts a farmers market on Tuesdays, Thursdays, and Saturdays. During baseball season, sports fans can make games even more memorable by ferrying straight to Oracle Park, the bayside home of the SF Giants.