All nine of the waterfalls in Washington state below could compete for that title. Some are dreamy hike-to falls in national parks and forests, one plummets into an irresistible swimming hole, and another is a fixture of Washington’s second-biggest city. The one thing these nine waterfalls in Washington State have in common is that you really should go see them. Seriously — it’d be a shame to be so close to these epic falls and not make the effort to see them in person. 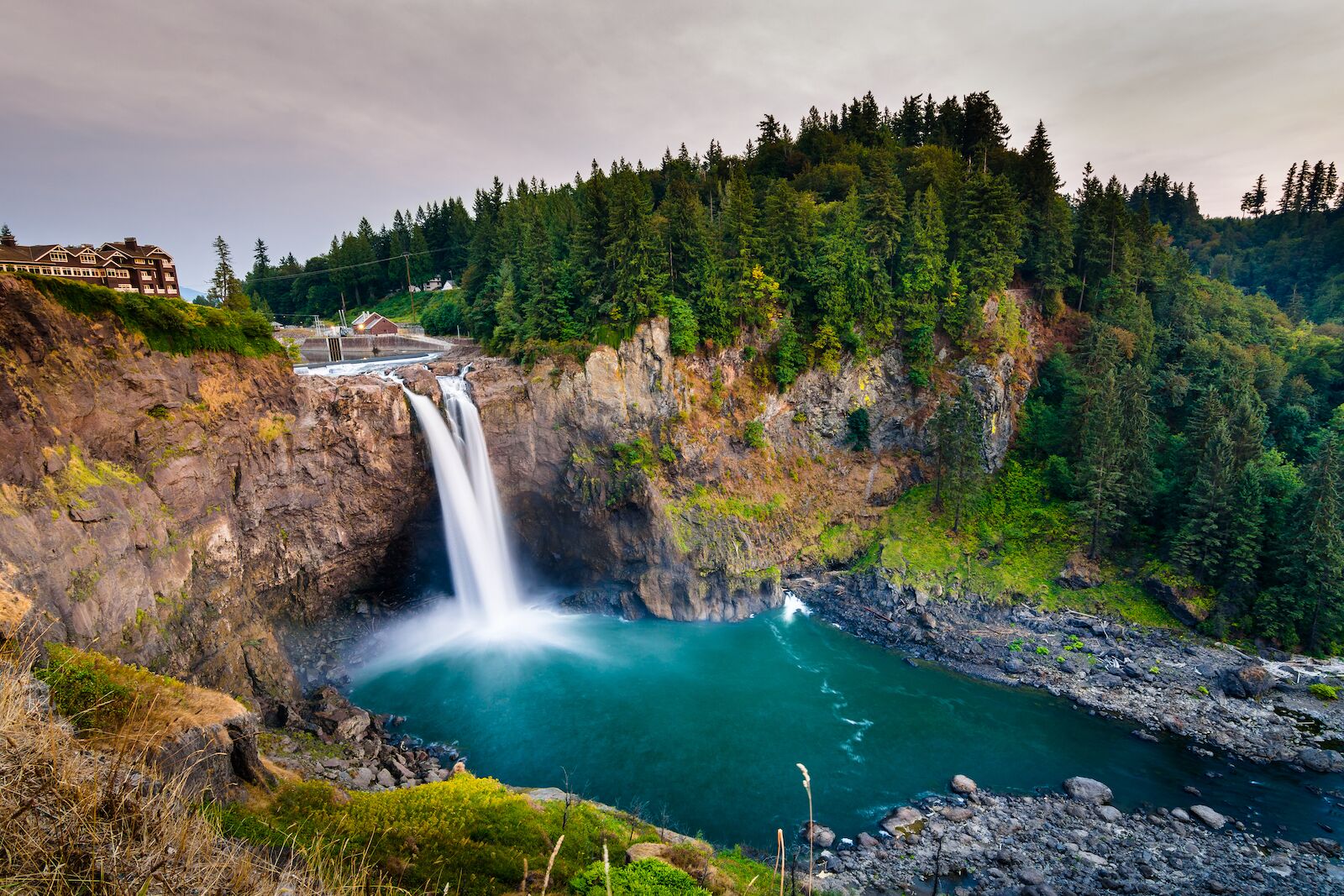 Over 1.5 million people visit Snoqualmie Falls each year, close to the annual number of visitors of nearby Mount Rainier National Park. The fact that the broad, bursting falls drop nearly 270 feet and average roughly 100 feet wide probably explains why it’s second only to the national park as Washington’s most-visited natural attraction.

But it also helps that Snoqualmie Falls is easily accessible. There’s free parking, the site has two observation decks, and it’s less than a one-mile walk along an interpretive trail to move between the decks. There’s also a wheelchair-accessible railed viewing platform about 250 feet from the parking lot. 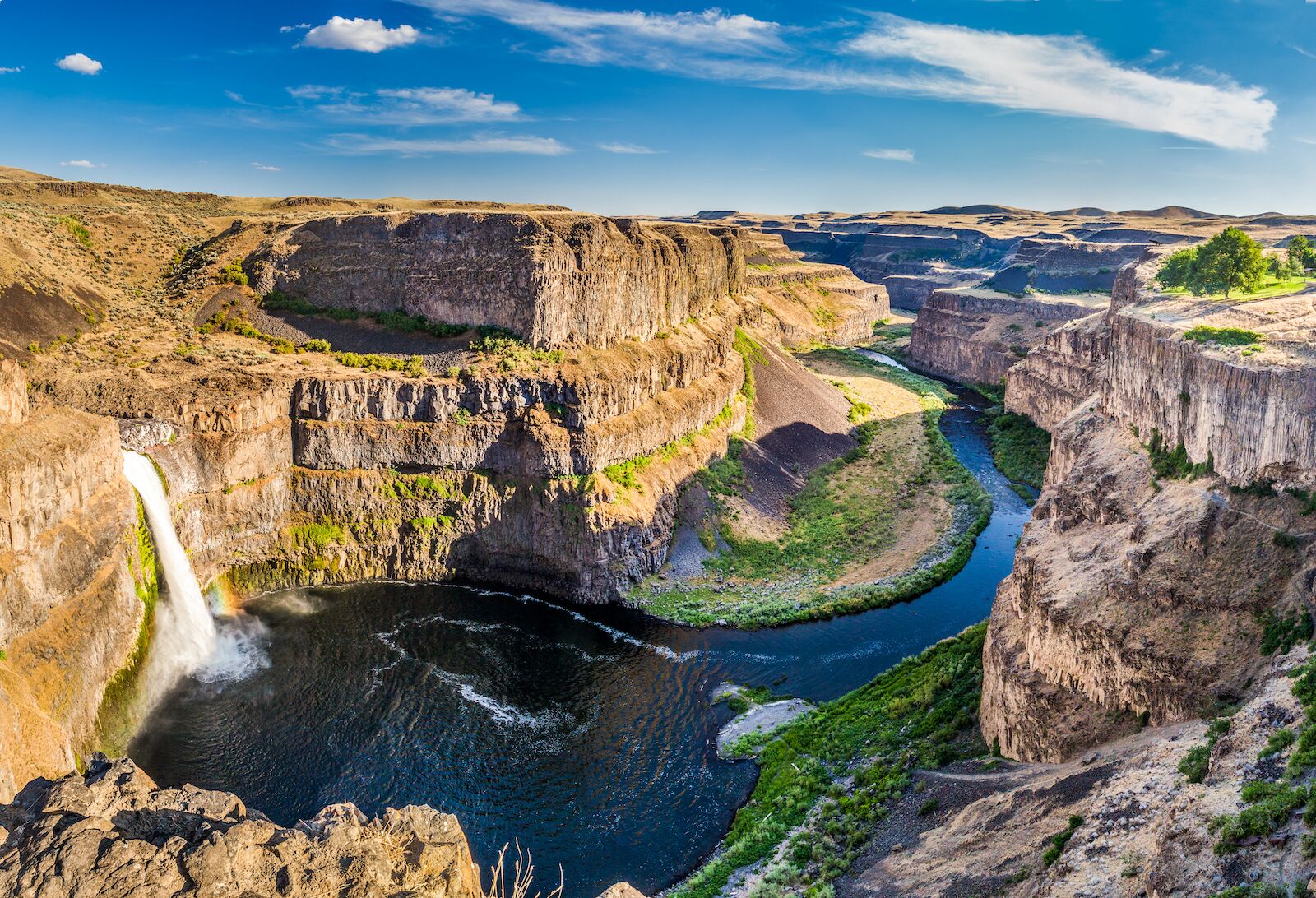 Apparently, Washington has a state waterfall, and it’s Palouse Falls. Local students pushed for the 200-foot-tall waterfall to be officially recognized, and in 2014, a bill passed to make that happen.

Why, you ask? Just take one look at the plunging cascade surrounded by dramatic basalt cliffs and the local pride immediately makes sense. In fact, the site is so beloved that it’s protected by a 94-acre state park with three viewing areas for the falls: a lower viewpoint by the main day-use area, a middle viewpoint at the end of an interpretive path, and a higher viewpoint called Fryxell Overlook that opens up to the entire Palouse River Canyon. 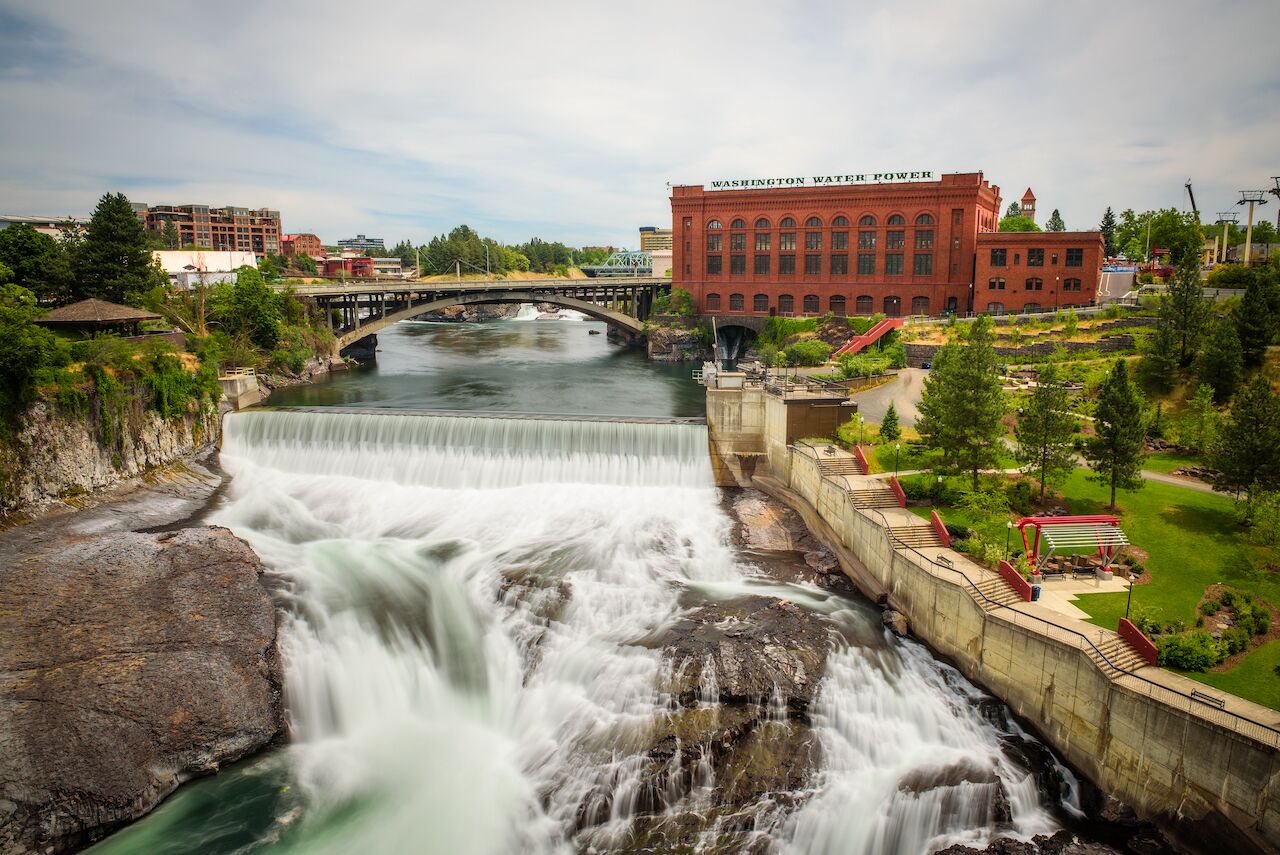 Running through downtown Spokane, the waterfall is split into two sections: the upper falls on the northern end of Riverfront Park and the lower falls beneath the historic Washington Water Power buildings on Monroe Street. Both falls have tons of great viewing areas — A Place of Truths Plaza, Huntington Park, and the many bridges spanning the Spokane River in the central business district, to name a few — but the 15-minute, gondola-style Numerica SkyRide is an extra memorable experience. 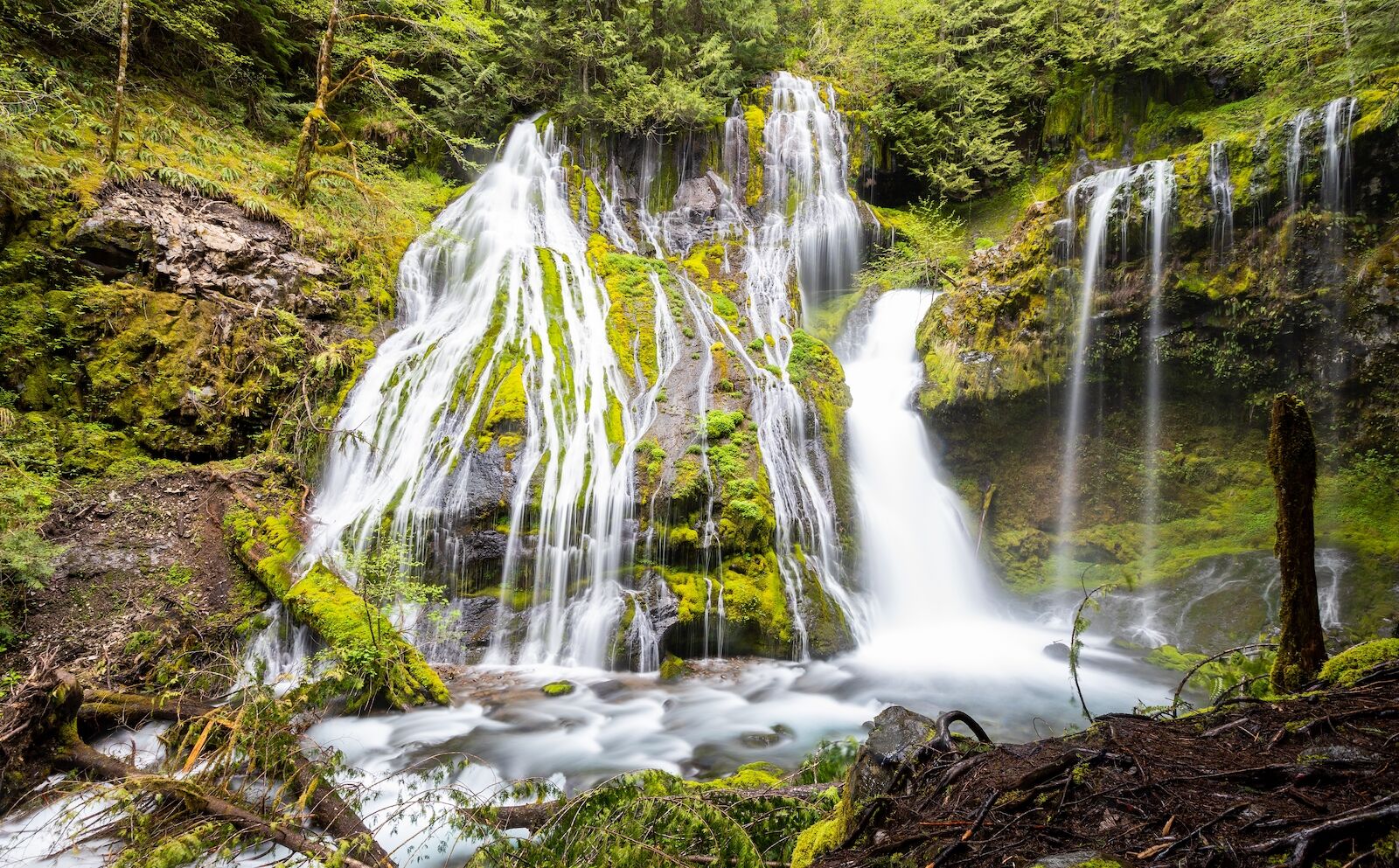 Panther Creek Falls is one of the most formidable waterfalls in the Columbia River Gorge area. It’s in Gifford Pinchot National Forest in south-central Washington, which runs along the western slope of the Cascade Mountains from the Columbia River to Mount Rainier. It’s a quick hike to the waterfall once you’re in the forest — less than half a mile out and back along Trail 137 — and is easy to add on to a day trip to other nearby falls, including the stunning (but perhaps poorly named) Falls Creek Falls. 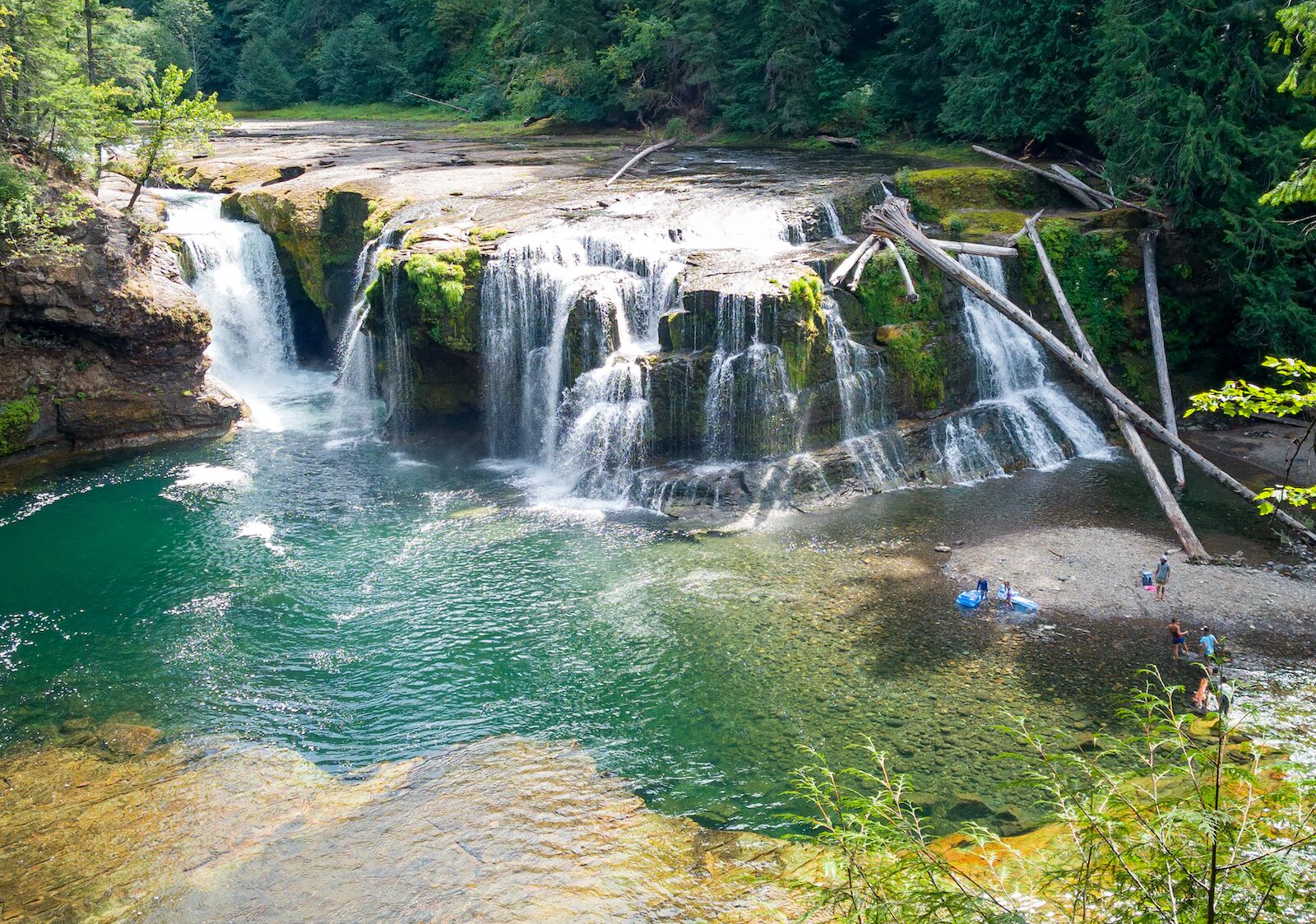 Lewis River Falls is another Gifford Pinchot waterfall easy to visit on a great tour of the national forest. But the lower falls is worth a dedicated visit.

At the base of the 200-foot-wide Lower Lewis River Falls, there’s a swimming hole where you could easily spend an afternoon splashing around and sunbathing on the rocks — especially if you tackle the 8.8-mile Lewis River Falls Trail to see the middle and upper falls, too. But if you’re just in it for the stunning blue-green swimming hole, you’ll be happy to know that you don’t have to hike to reach it if you park at the Lower Falls Campground. 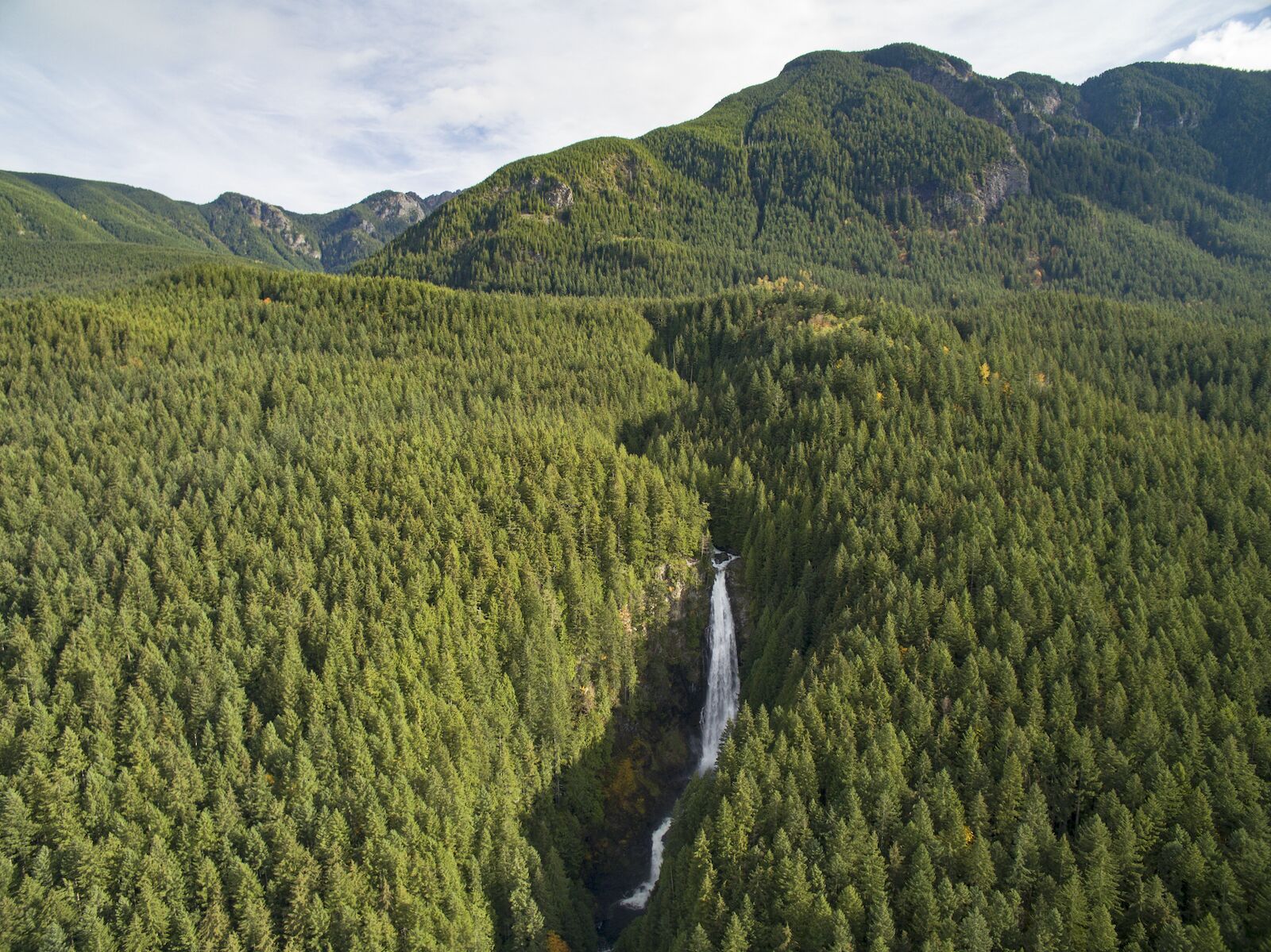 But when people refer Wallace Falls, they’re generally referring to the showstopping middle falls, which have a total drop of 367 feet over three tiers; the largest drop measures 265 feet. A moderate hike connects all three falls, covering roughly 5.5 miles and 1,300 feet of elevation gain. The bulk of the incline lies between the Upper and Middle Falls in the form of switchbacks, which you can easily skip and still get a good glimpse of the Lower and Middle Falls if you’re looking for a gentler outing. 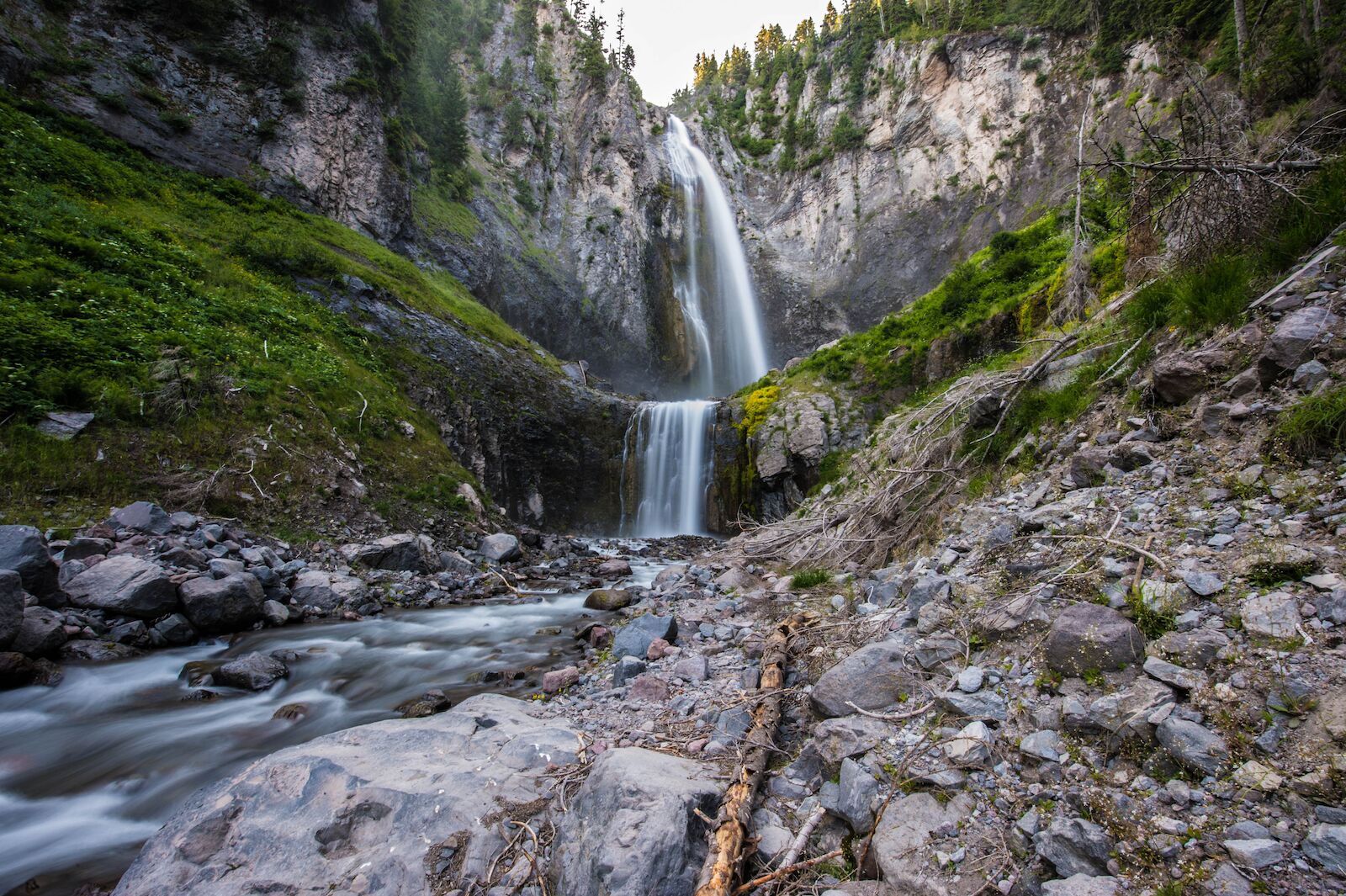 The Evergreen State might as well be nicknamed the Waterfall State, thanks in no small part to Mount Rainier. The national park has more than 150 waterfalls alone, including the stunner called Comet Falls.

So named because the 320-foot drop looks like the tail of a comet, Comet Falls is one of the tallest waterfalls in the park. It’s a popular hike, totaling 3.8 miles round trip to reach the base. The trail also accesses Van Trump Park if you’re up for a 5.8-mile hike with views of Mount Adams, Mount Saint Helens, and the Rainier’s Kautz and Van Trump glaciers as the payoff. 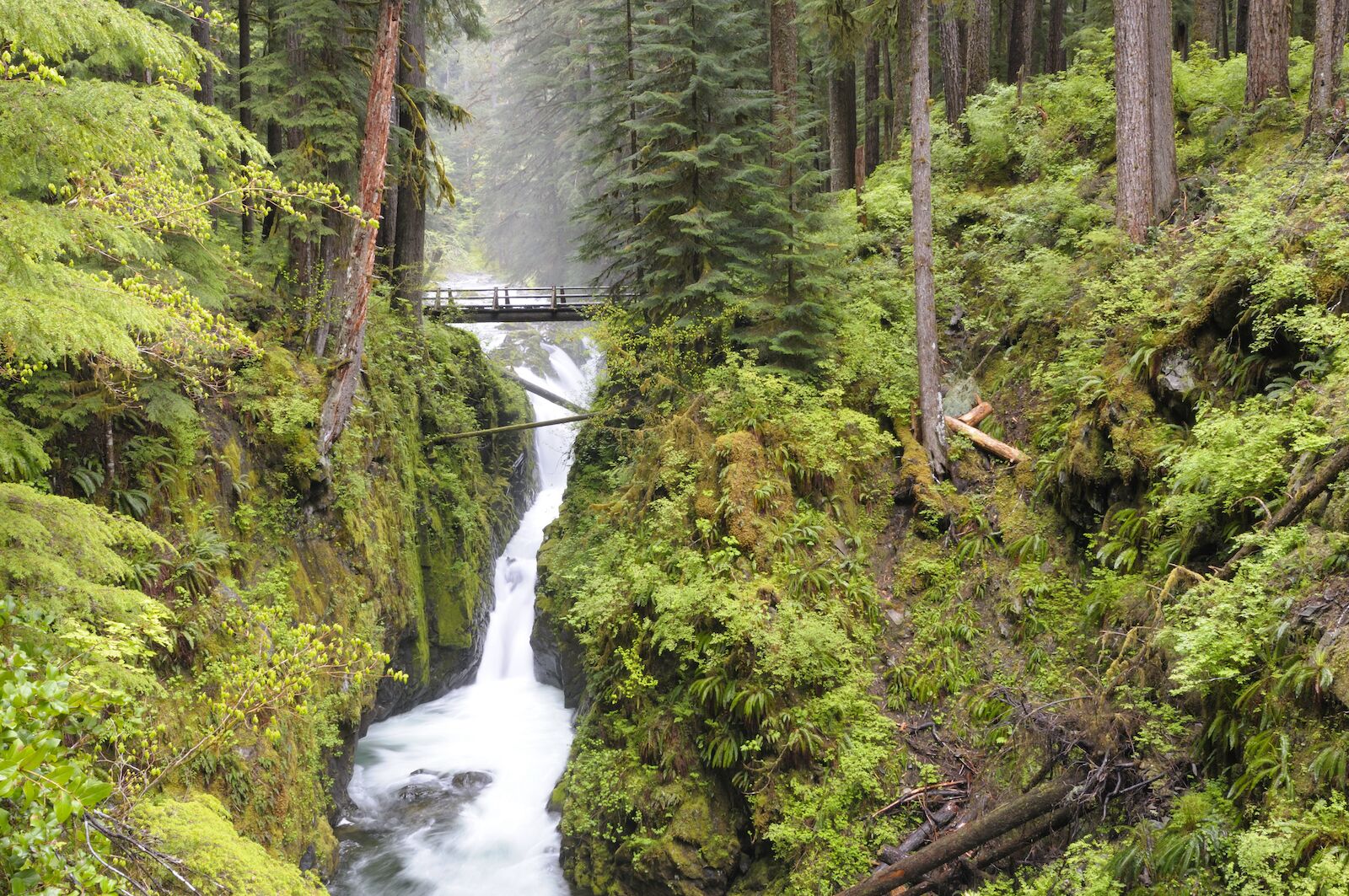 Sol Duc Falls is one of several waterfalls in Olympic National Park, Washington State’s coastal park. But what makes Sol Duc one of the most special waterfalls in Washington state is that you can see the falls not just from the base, but from above.

The hike there is gentle — only 1.6 miles round-trip with minimal elevation gain — and cuts through dense, old-growth forests that provide shade while also passing a handful of smaller falls. For more of a workout, you can piece together more of the park’s most exciting water features on the Olympic Peninsula Waterfall Trail, including Rocky Brook Falls, Marymere Falls, and Bunch Creek Falls. 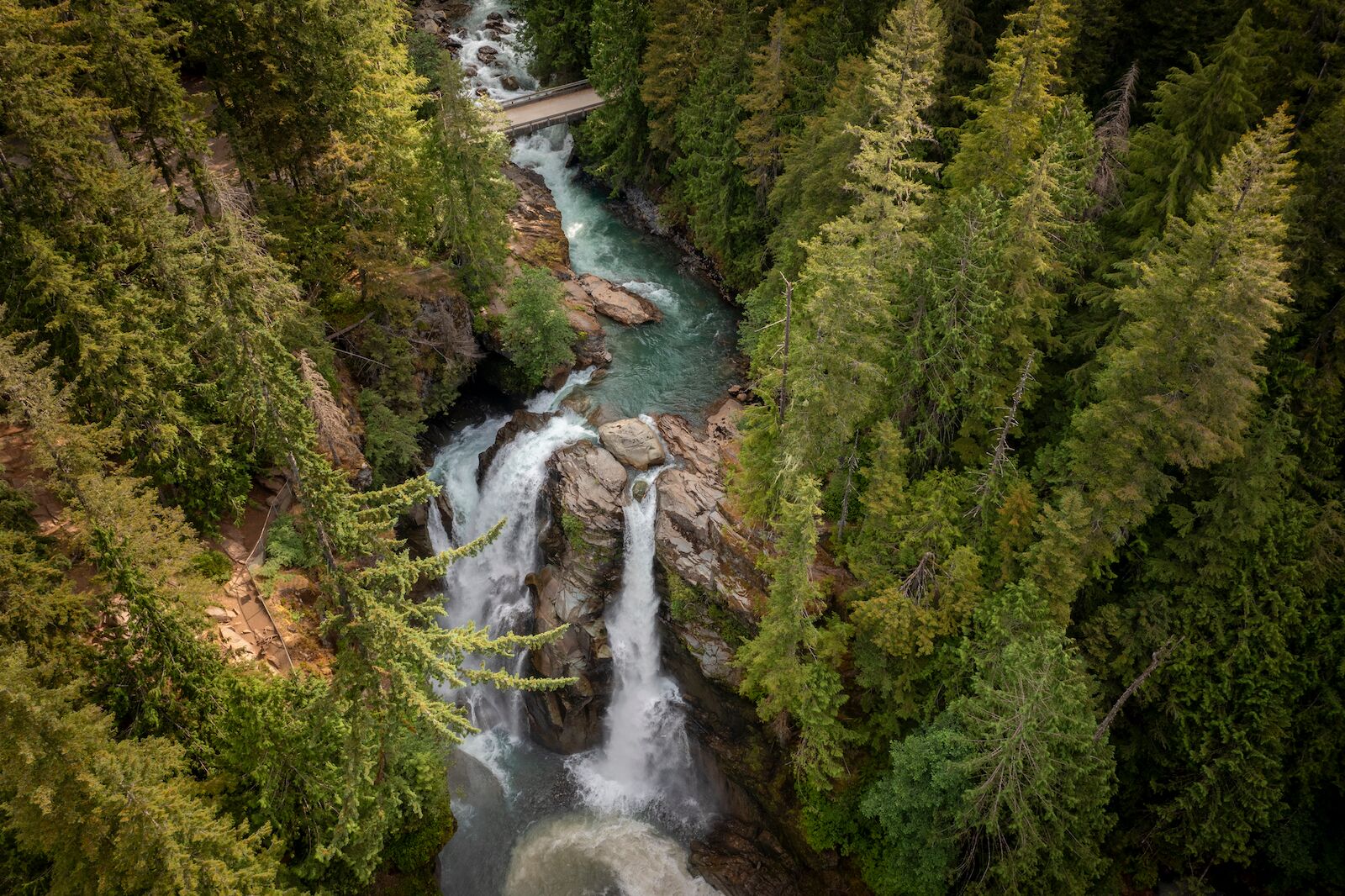 Nooksack Falls is less than a mile off Mount Baker Highway, not far from Washington’s third-highest mountain. At 88 feet tall, Nooksack doesn’t rank as one of the highest falls, but it’s nonetheless one of the most visually striking waterfalls in Washington State. That’s probably why it was chosen as a filming location for the 1978 drama flick The Deer Hunter.

Fortunately, it’s easy to see it off the big screen: just pull off the highway at Forest Road 33 to find the viewing area, which is just a few paces away from the parking area at a rocky outcrop above the falls. After you’ve captured your own Hollywood-quality footage of the flow, carry on exploring the rest of Mount Baker-Snoqualmie National Forest and nearby North Cascades National Park.

Hiking6 Must-See Waterfalls Near Portland You Can Reach in Half an Hour
Tagged
Outdoor Washington, United States
What did you think of this story?
Meh
Good
Awesome