Spokane, Washington state’s second-largest city, certainly doesn’t get the hype of the larger Pacific Northwest hubs. It doesn’t have the brunch chops of Portland or the startup scene of Seattle. It also only has just over half a million people in the entire metro area and surrounding valley. As the cost of living continues to skyrocket on the other side of the Cascades, the meter is slowly shifting to the east. With the same temperate climate, easy outdoors access, and much more bang for your buck, Spokane is on the brink of becoming the region’s next big spillover city. Even if moving there isn’t in your future, by taking a trip out there soon, you’ll not only beat the simmering trend, but you’ll finally have something that is actually unique to post about on social media. 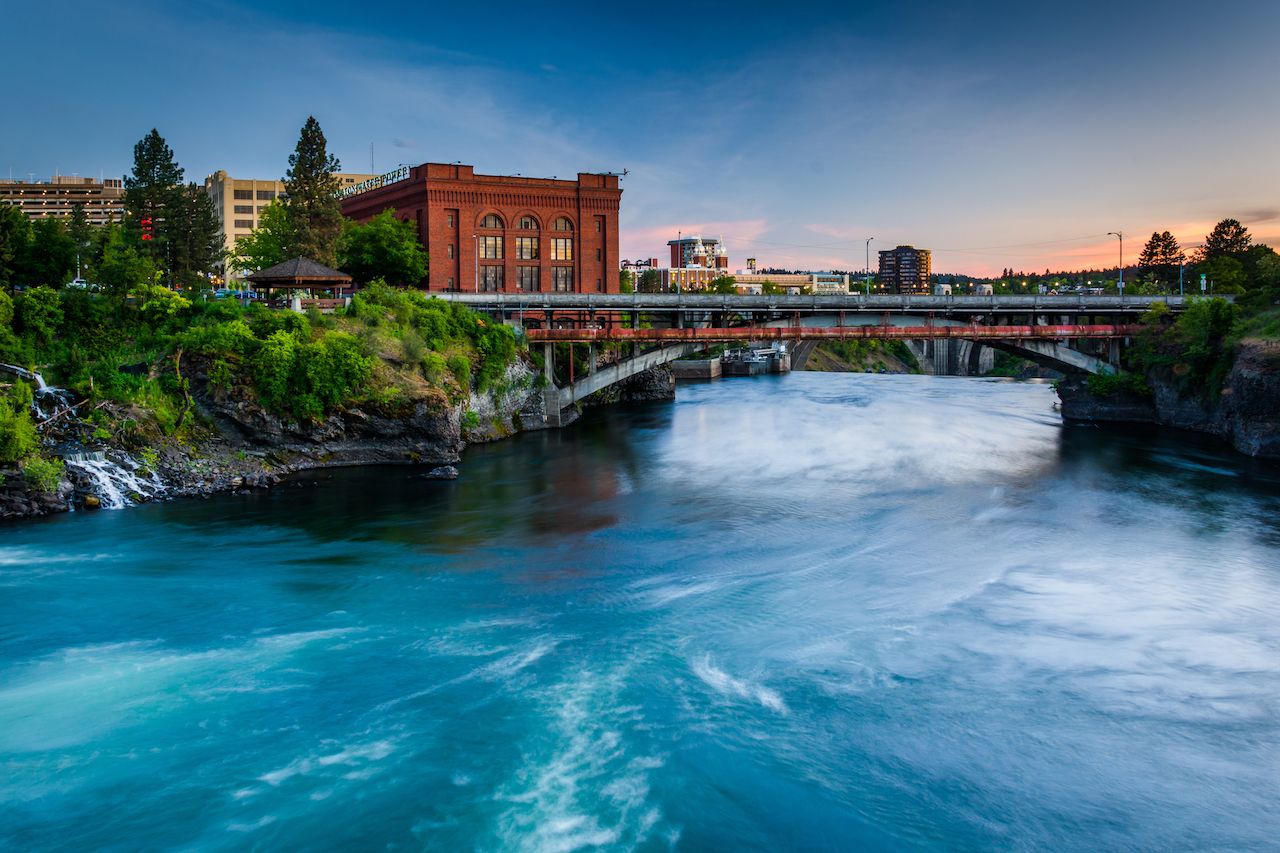 Spokane is estimated to grow by another 20,000 people in the next 20 years, according to US Census Bureau statistics, with many of those new residents expected to come from the more expensive coastal cities. The Spokesman-Review reported that in recent years, more than 2,000 residents of King County (Seattle) alone leave each year in favor of Spokane County. To those coming from larger cities, the most noticeable difference is the lifestyle. Spokane’s way of life is far more relaxed than what you might find on the other side of the state — to the point where you can actually feel the absence of tech bros and $5 coffees. The rush-hour commute is more of a lack thereof than a daily headache, though this is critical because the public transit isn’t nearly what it is in Seattle. General living expenses in Spokane are significantly cheaper compared to cities on the coast, the biggest money-saver being housing.

Average rent is at least half in comparison, coming in at under $1,000 on the apartment rental website Rent Cafe compared to just under $2,000 in Seattle for a similar 800-square-foot apartment, and the average house price is just over $200,000. Looking back since the 2010 census, the Spokane metro area has been steadily increasing in population over the past few years due to job growth. This is partly spurred by the two universities, with the Seattle Times noting that over 8,000 people moved into Spokane County last year alone. Medicine and government are the other top job markets, though an Amazon fulfillment center is under construction and plans to employ over 1,500 people.

Another aspect of Spokane to consider is the legalization of marijuana statewide. Although it may or may not affect you directly, the state (and in turn, many social programs) certainly benefits from it. In 2018, over $120 million in taxes were reported by the Washington State Liquor and Cannabis Board, down from an even more enormous $314 million the year before. These funds are distributed between organizations and funds like the Basic Health Plan Trust account, which provides healthcare to those who need it, and the Department of Social Health Services that apply it toward substance abuse programs. Other uses include community health centers, public and educational programs, and drop-out prevention efforts. 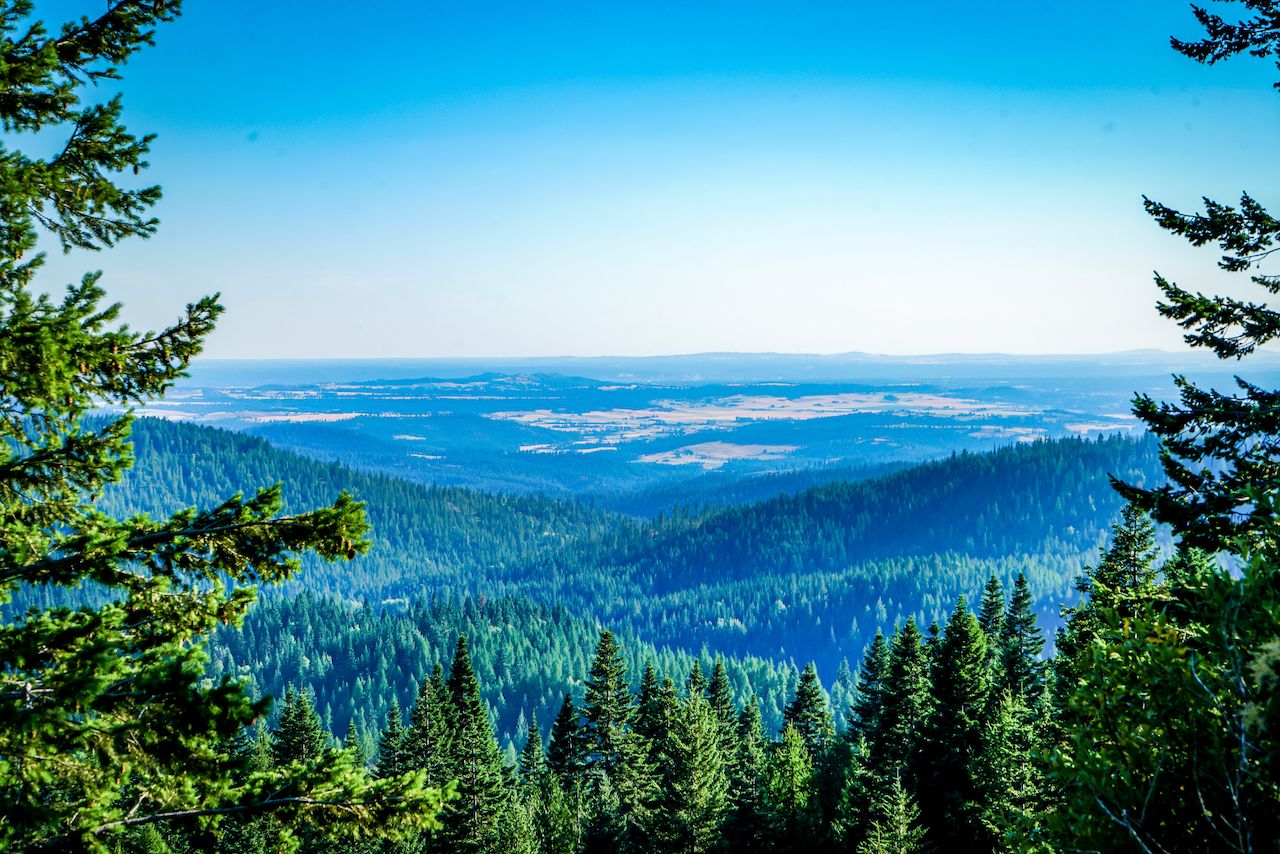 Beyond the mellow lifestyle, Spokane’s most attractive quality is it’s proximity to nature. There’s a people-driven vibe in the outdoors community here that almost seems too quaint for a city of Spokane’s size, and the locals are into it. They’re into not being a resort destination with traffic inching its way up a clogged highway into the hills every Friday evening and Saturday morning. Nearly any recreational activity doable in the PNW — from skiing and snowboarding to fishing, hiking, and camping — is within an hour’s drive. Mt. Spokane Ski and Snowboard Park is the local mountain for making turns. It’s a community-owned nonprofit, which, in addition to being a place where the people who ride there can have a voice in decision making — such as its recently completed addition of the new North Wood lift and additional terrain that opened last season — also keeps lift tickets far below what you’d find further west. The state park that surrounds it and shares its name is flanked with hiking and biking trails, and is a popular camping spot for Spokanians during the summer. 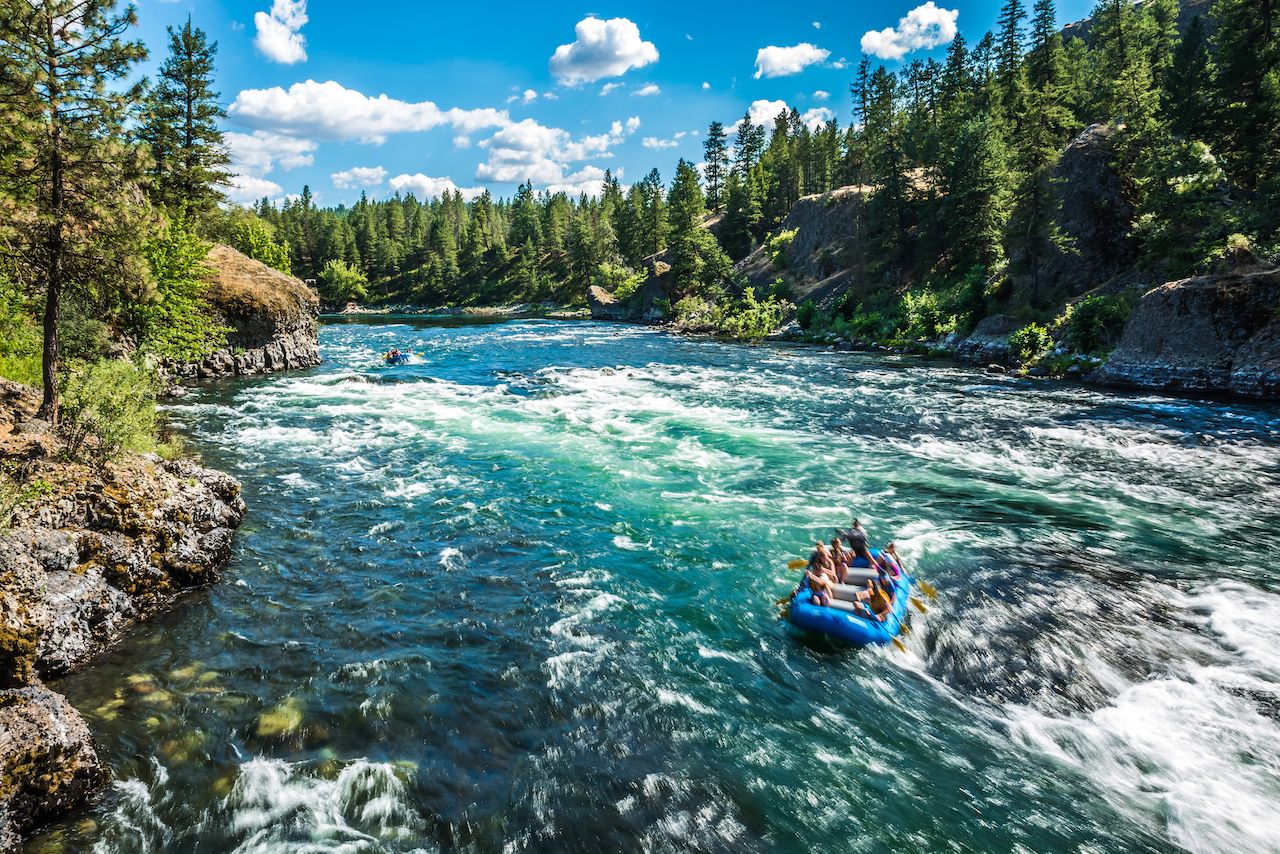 On-water activities are a thing here too, despite the coast being five hours away. Rafting or kayaking the Spokane River from Riverside State Park, just outside of town, back toward the city is a rite of passage here. The Class III whitewater float takes about two hours, so it’s not going to fill your whole day but is engaging enough that you actually feel like you got a good river session in. Head downtown to Riverfront Park for a walk along the river or take the SkyRide over Spokane Falls. Another local feature is the 90-acre Manito Park on the South Hill, which includes several manicured gardens, a duck pond, walking and biking paths, and an arboretum. 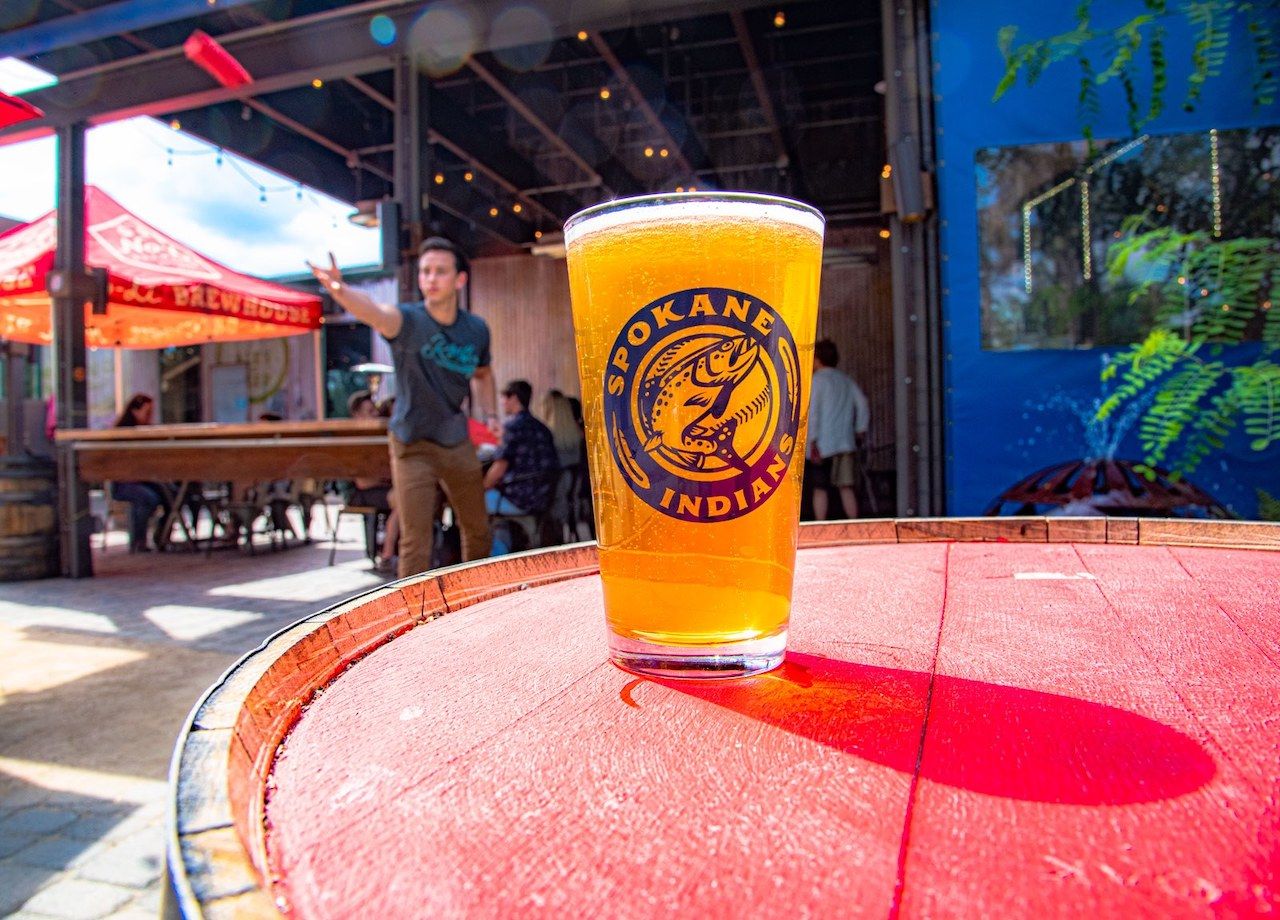 This far north and west in the country, Spokane is the biggest city between Seattle and pretty much forever, which can seem isolating — and it is, to an extent — but this fact has worked out well for the local music scene. Spokane has some unique claims to fame. It’s home to the world’s largest 3-on-3 outdoor basketball tournament, Hoopfest, each summer. It also has the Spokane Zombie Crawl on the first Saturday of every October, which is exactly what it sounds like and on par with the long-running equivalents in San Diego and Denver. And then there’s the Skyride Gondola, the closest thing Washington has to the cable car transit systems in South American cities. This gondola takes you from Riverfront Park downtown and gets up close and personal with the Spokane Falls that run through the heart of the city, then moves across the Spokane River and back to the park. It’s a must-do for anyone visiting the city, and while this won’t replace other methods of transit on a daily basis, it’s all good because there’s no traffic anyway. Just be sure to put those snow tires on in November.

The remoteness and the presence of both Gonzaga and Eastern Washington universities have also worked out well for live music. A consistent slew of touring artists stop in Spokane on their way through the PNW. The local scene happens at the Knitting Factory — a sister to the locations in Brooklyn and Boise — and the Fox Theater, which in addition to hosting Ray Lamontagne this fall, is the PNW’s finest tribute to Art Deco. On the beer front, because no one is going to spillover anywhere unless there are at least three smoked IPAs on the other side, Iron Goat Brewing Co. and River City Brewing are popular spots to meet, eat, and sample the tap, and No-Li Brewhouse is a popular downtown spot by the river.

It’s an easy city to get outside of. 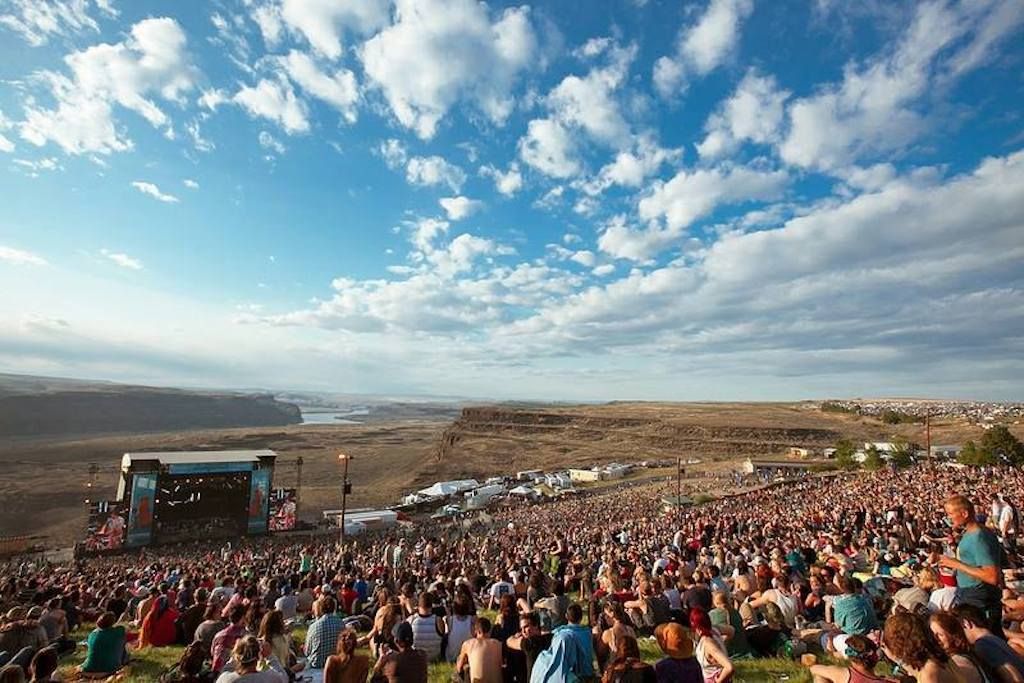 Photo: Fans of The Gorge Amphitheatre/Facebook

In a two-hour drive, you can catch a concert at what has been called one of the best venues in the entire country. You’re about as likely to hear one story about the Gorge Amphitheatre for every ten you hear about Colorado’s Red Rocks Amphitheatre, but the setting is, at least in the local opinion, equally idyllic for an outdoor concert. If the outdoor activities aren’t enough to draw people over the hills from Seattle or up from the Rockies, a steady run of jam band shows and camping festivals should do the trick. If you like a little wine with your music, stop into Arbor Crest Wine Cellars. One of the many wineries in the area, it offers live music that overlooks the vineyards every Sunday night throughout the summer and plays to a crowd that primarily consists of young professionals, old professionals, and craft booze enthusiasts. Bring a blanket, some snacks, and your own drinks if wine is not your thing, and sit back and enjoy the music.

TravelSouth Dakota is the most underrated state in America. Here’s why.
Tagged
Culture Travel Trip Planning
What did you think of this story?
Meh
Good
Awesome

Bicycling the ‘Recreational Trails of Idaho’

Boys on blades: The US Men’s figure skating championships

Hoopfest: 3 on 3 street basketball at a world class level