Sometimes the most fun thing about a superstition is tempting fate and going against it.

In the early 2010s, Jamie Oakes, master distiller at Tamworth Distilling, was tapping the maple trees at Great Hill Farm near Tamworth, New Hampshire. The procession of maples he was working on included some trees that were more than 100 years old, and all led up to the farmhouse. Oakes was shadowing an older local man, taking photos of him as the crew worked their way down the line. About two-thirds of the way through, he reached an old knobby maple on the eastern side that sat on top of a plot of barely marked headstones in a 30-square-foot cemetery. Just before he drilled in, the local man stopped him.

“I was a little confused, since there is a maple not 40 feet away I had just tapped,” Oakes says. “He simply and surely told me ‘we don’t tap that one.’ Normally a rosy-cheeked jovial fellow (the air still crisp), his face was grave and pale. I knew the cemetery existed on the property, but as I saw the cold face staring blankly at me I only then realized I was directly on top of the parcel.”

An honest mistake — the spring snow was still piled high enough to cover all but the tops of the 10 or so one-foot-tall tombstones. Tamworth Distilling’s founder, Steve Grasse, had noticed that particular graveyard maple as well, and had ideas about using it to make a spirit before there was even an official working distillery.

“I mentioned this somewhat somber interaction during the next weekly meeting [at Tamworth Distilling],” Oakes says. “Kind of a funny anecdote, and Steve was intrigued.” After learning more, Oakes says, “what I thought was just an old local’s apprehension turned out to be a very real superstition.”

That passing interaction was the start of an off-and-on conversation about how to use that maple in a spirit somehow. Fast forward seven years, and those conversations have finally come to fruition: In September 2019, Tamworth Distilling released Graverobber Unholy Rye, a whiskey flavored with maple syrup made from the graveyard’s trees.

Tamworth isn’t the first to tap maple syrup from cemetery trees, but it is the first to make a whiskey with it. Staff at Fernhill Cemetery in New Brunswick on Canada’s east coast has made a maple syrup, as has Spring Grove Cemetery and Arboretum in Cincinnati and St. Agnes Cemetery near Albany, New York.

Technically speaking, the maple syrup from cemetery trees is perfectly safe to eat or drink, and the idea that it’s bad luck or disrespectful to tap maple from them isn’t widespread. Jennifer Mele, the director of communications for Albany Diocesan Cemeteries (which runs St. Agnes), hadn’t heard of the taboo, and neither had the cemetery historian. The trees were tapped as an experiment, and the syrup was more of a fun side project.

“We didn’t have any complaints (about the taste),” Mele says over the phone, laughing.

Brian Heinz, manager of horticulture at Spring Grove Cemetery and Arboretum, wasn’t aware of any taboos either. However, the cemetery historian, Skip Holmes, “liked the punny humor in that verbiage” of the Graverobber whiskey. 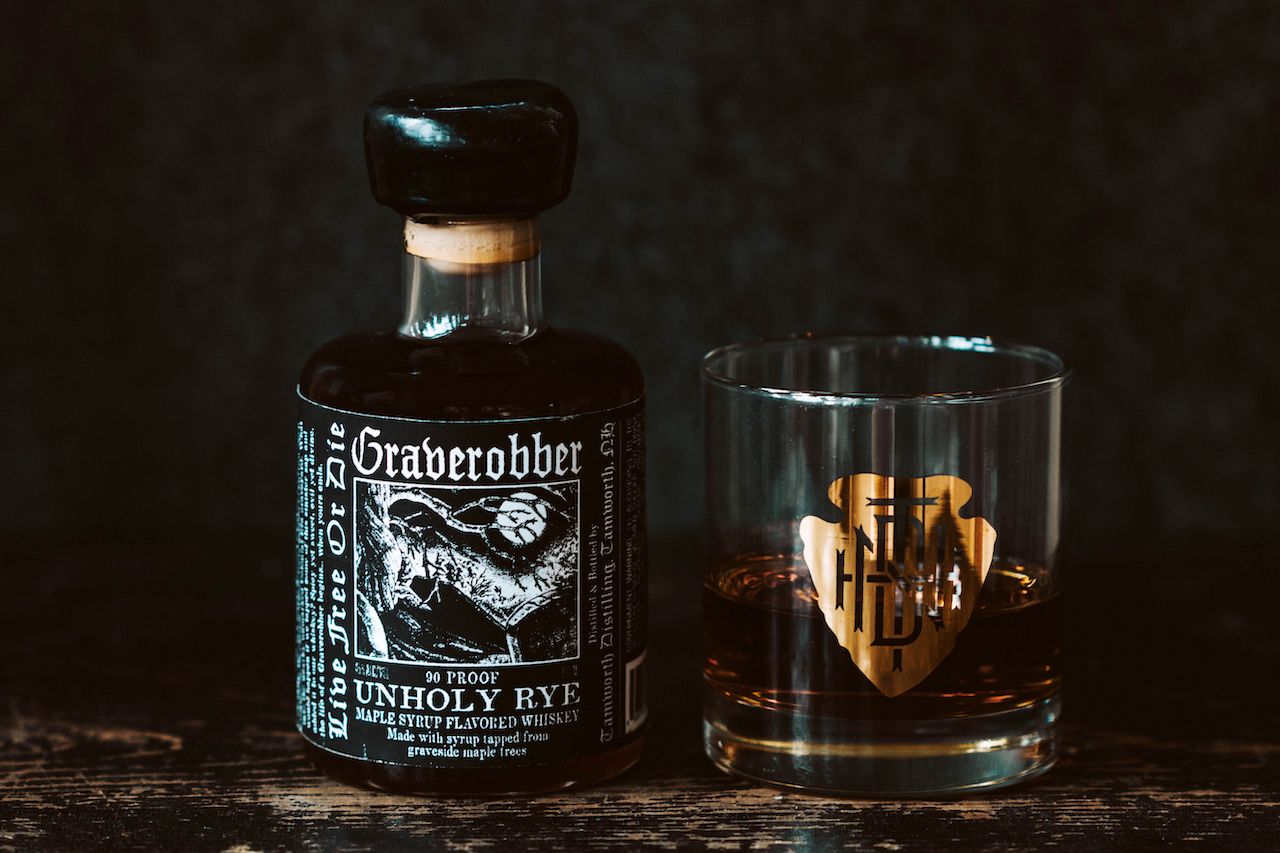 Grasse and Oakes dug into the histories and legends behind the superstition and were often faced with more questions than answers.

“The lore doesn’t seem to have a definitive tale, just a general guideline not to disturb burial plots or partake of the fruits of the sacred soil,” Oakes says.

Just as murky was who, exactly, is buried in the small cemetery. Grasse researched gravesite history and the past owners of the property but found nothing. The marketing material for Graverobber Unholy Rye notes a placard from the mid-1700s by the cemetery that reads, “Here lies early settlers, their names may be forgotten, but their souls are registered in heaven.”

“I think the unmarked gravesite is ultimately more mysterious,” Oakes says. “There are some speculations as to who might actually be buried there, but personally I think not knowing is better.”

What is known is that Graverobber Unholy Rye is delicious. The overproof whiskey is strong, at 45 percent ABV, but balanced by an underlying sweetness. There’s just enough spice to give it a long finish. A bottle has sat in my apartment for some time without any haunting vibes, but the same can’t be said at Tamworth Distilling.

“Funny you should ask, but we have had some really odd things around the distillery,” Oakes says. “Electrical outages, switches failing, and pumps not working. We rarely have issues (knock on wood) and to have a few stack up in the weeks of dumping the barrel, bottling, and so on feels … um … just outside of coincidence.”

Where to Stay9 haunted hotels you can actually spend the night in
Tagged
Spirits + Cocktails New Hampshire, United States
What did you think of this story?
Meh
Good
Awesome