There’s an old saying that goes, “What happens in Vegas stays in Vegas.” It could also say, “Whoever goes to Vegas stays in Vegas” and be just as accurate. Travelers are often so enamored by the bright lights of the casinos, nightclubs, and hotels that they fail to venture beyond Sin City and explore the rest of the state. In fact, you could spend weeks traveling around Nevada’s mountains and deserts without visiting Las Vegas at all.

Much like Vegas itself, the whole state of Nevada captivates with its weirdness and its sheer diversity of attractions. From art installations in the desert to alien-themed towns, there’s a whole other side to Nevada that doesn’t involve roulette wheels and strip clubs. 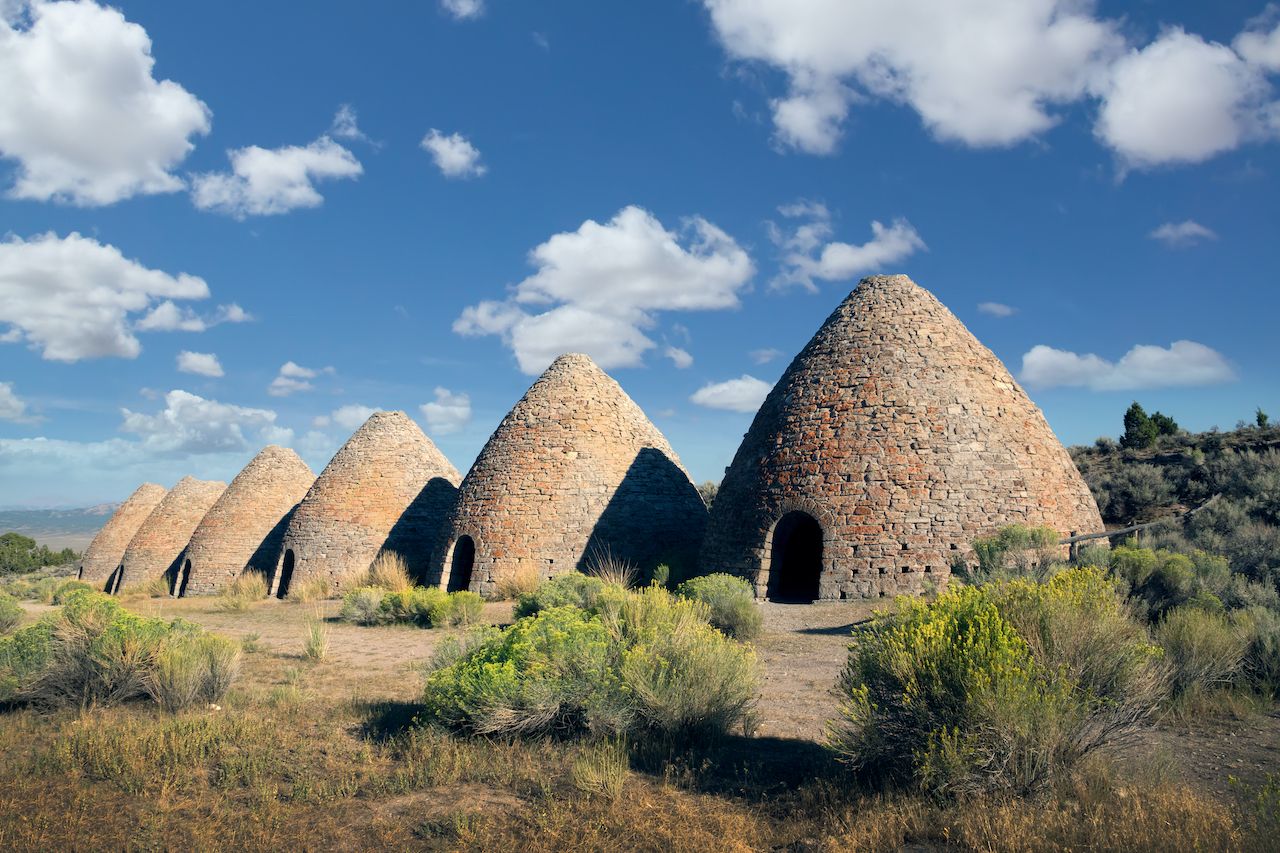 True to its name, this park, four hours north of Vegas, is named after the six historic charcoal ovens located on the site. The beehive-shaped ovens were used between 1876 and 1879 during the silver boom and served to produce, well, charcoal. Once they were no longer needed for charcoal production, they were used for shelter during inclement weather, and rumor has it bandits used them as hideouts. Located in the Egan Mountain Range, the park is popular for camping, picnicking, hiking, fishing, and viewing wildlife like mule deer, grouse, and elk. 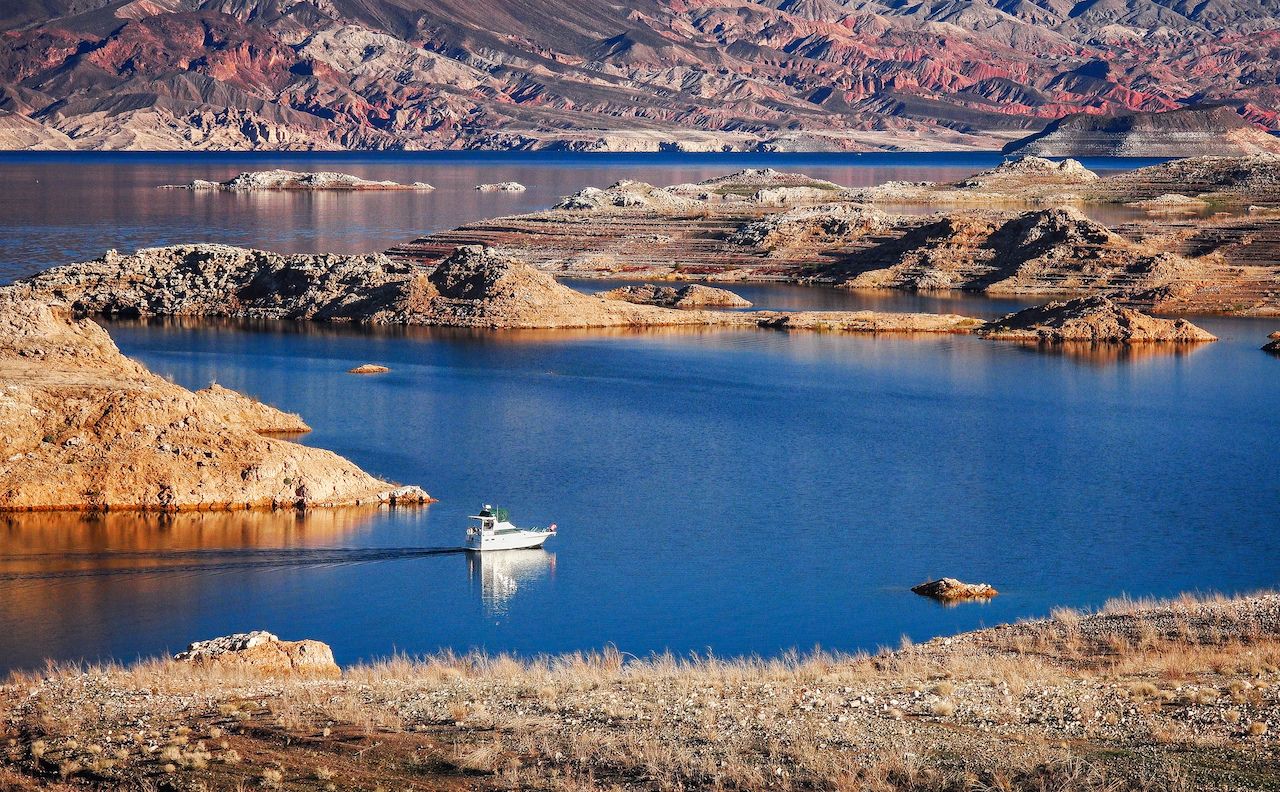 You might think rural Nevada is all arid desert, but at Lake Mead, water sports and maritime recreation reign supreme. Just east of Vegas, Lake Mead National Recreation Area is the country’s first and largest national recreation area. A diverse landscape of lakes, rivers, mountains, and desert combine to offer a range of outdoor adventures that feel a world apart from the lights and sounds of Las Vegas. Between the area’s mountains, slot canyons, valleys, and lakes, there are plenty of opportunities for hiking, climbing, camping, boating, and swimming. From the waters of Lake Mead (or the smaller Lake Mohave located slightly more south), you can see the imposing Hoover Dam. 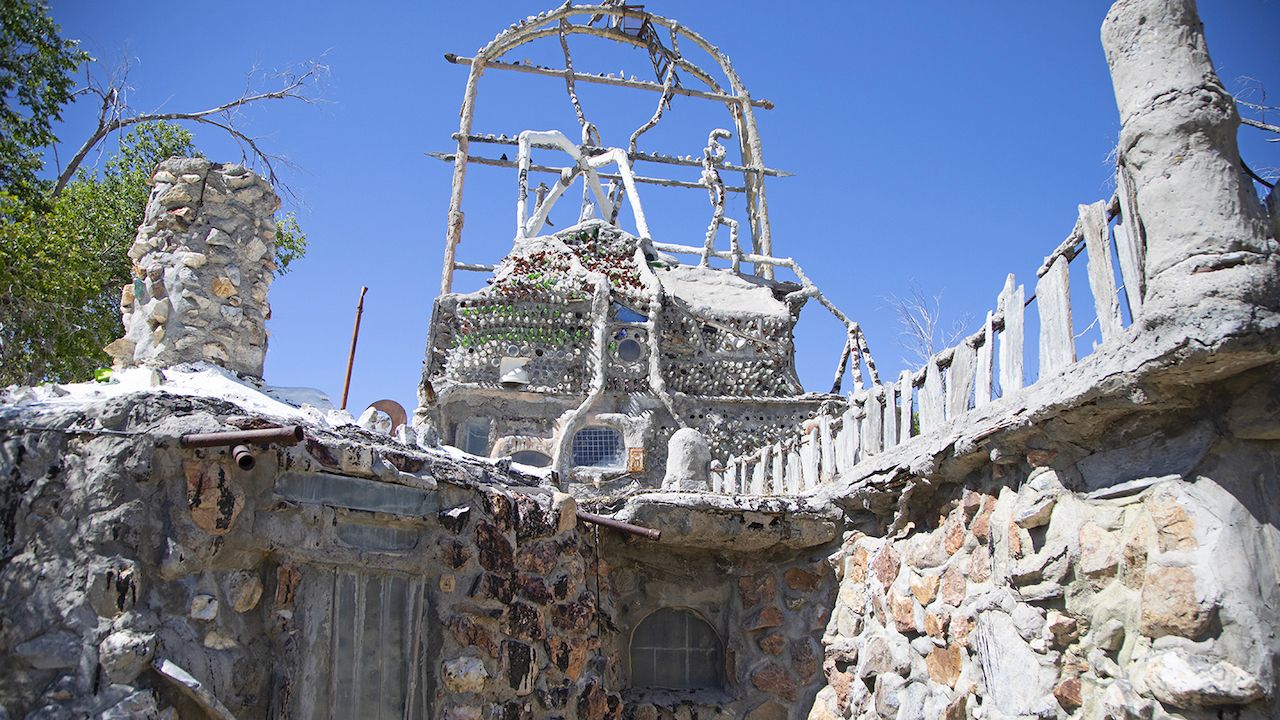 It might sound like a Disney World attraction, but Nevada’s Thunder Mountain is actually a peculiar art exhibition of sorts near Lovelock. Created by Fran Van Zant, also known as Chief Thunder, these unique roadside structures are inspired by Van Zant’s American Indian heritage. He wanted to commemorate the region’s original inhabitants by collecting items he found in the Nevada desert to create a monument, which also served as his private residence. He used the materials — including bottles, hubcaps, and guardrails — to build several surreal-looking structures and dedicated them to the Great Spirit. The site is now remotely managed from California by Van Zant’s son. Visitors traveling along I-80 are encouraged to stop and wander the grounds for free. All donations go toward maintaining and improving the structures. 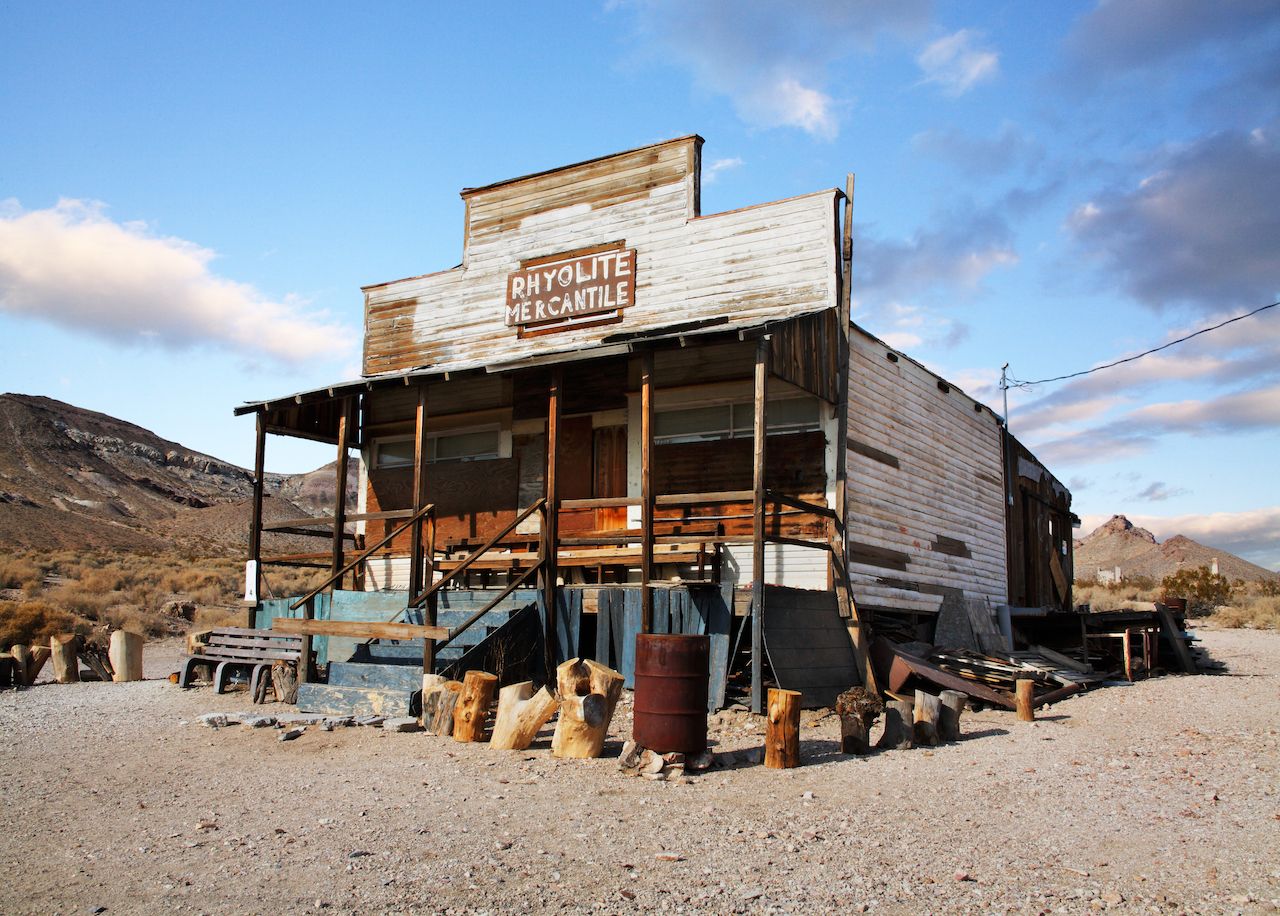 Nothing says Nevada quite like a ghost town straight out of a Wild West movie. Rhyolite, population zero, is the epitome of such a town. Initially settled in 1905, this old gold-rush town used to be a busy hub. By 1920, however, the town fell into ruin and was abandoned entirely. Now you can visit its remains, including some forsaken houses and an old jail, bank, and railroad station. Walking the empty streets feels like walking through an elaborate movie set, which makes sense considering films like The Reward (1965) and The Island (2005) were filmed here. 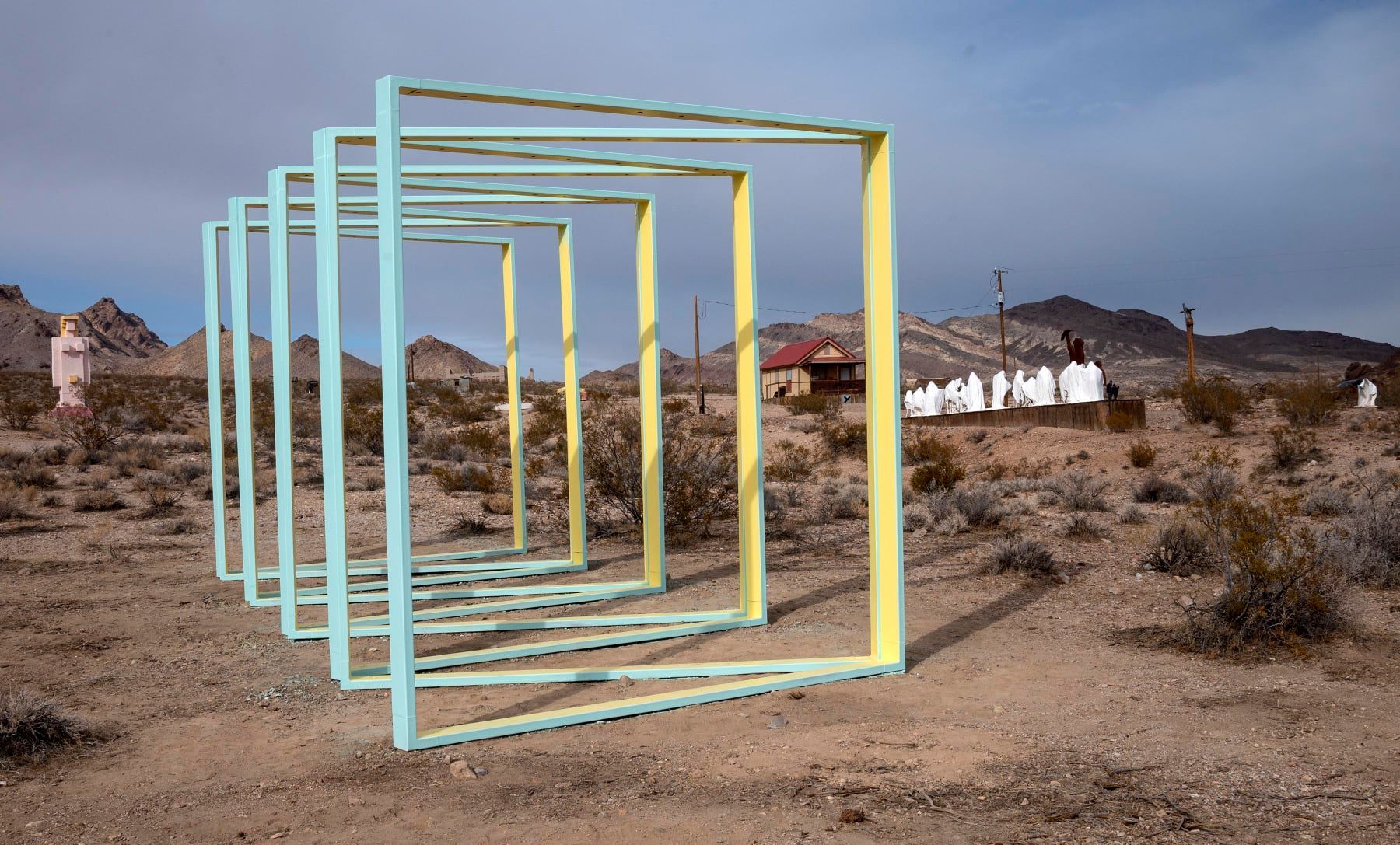 Just south of Rhyolite sits another attraction in the middle of the desert. The Goldwell Open Air Museum is an unconventional art exhibition created by a group of Belgian artists made up of massive outdoor sculptures. The sculptures include Dr. Hugo Heyrman’s Lego-like “Lady Desert,” the “Venus of Nevada,” and Albert Szukalski’s “Last Supper,” among others. Throughout the year, there are also events and cultural activities in the nearby town of Beatty to give people a reason to keep visiting. 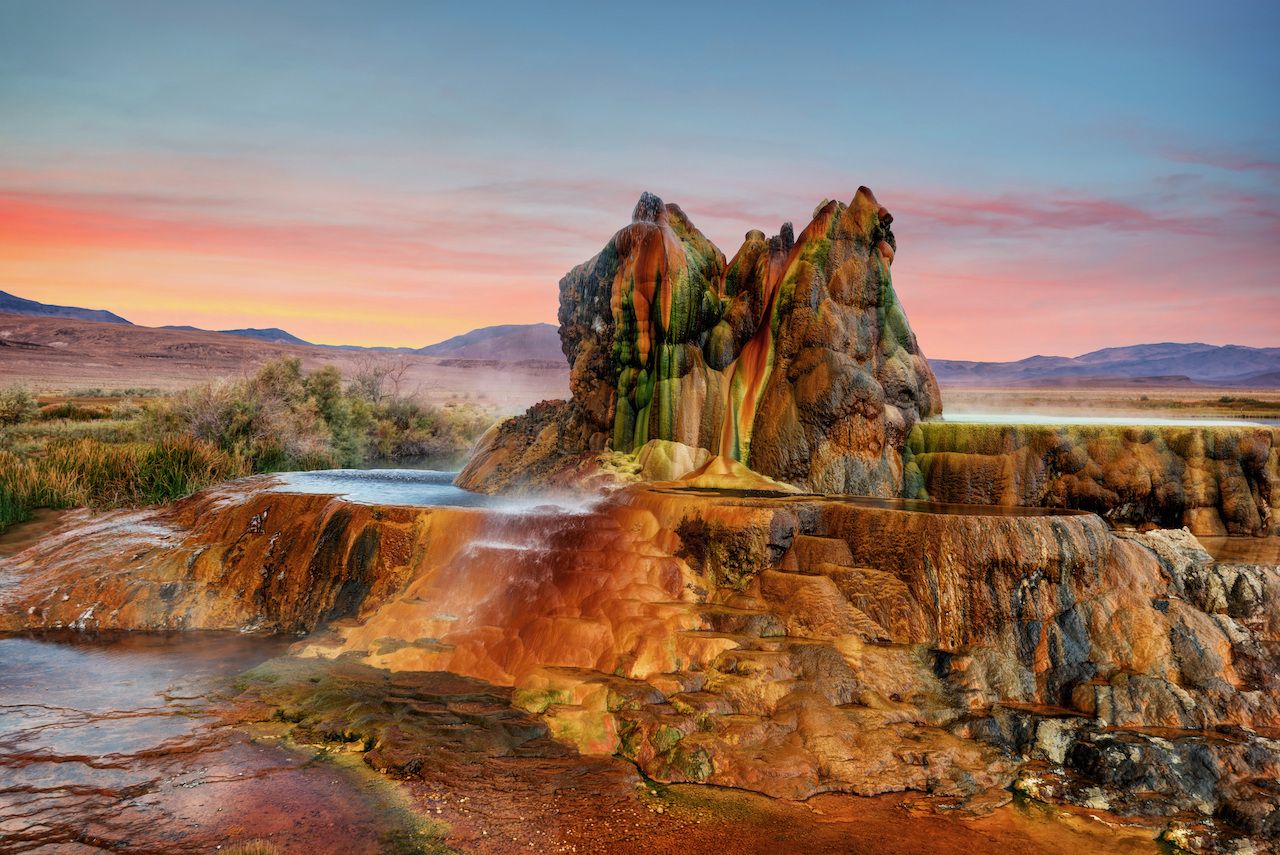 The Fly Ranch Geyser looks like a cross between Old Faithful and something you’d find at an amusement park. Located on 3,800 acres of land in northern Nevada, the geyser sits right on the edge of the Nevada Black Rock Desert and has three separate water spouts. Its formation began around 1964 when a geothermal power company drilled a test well there. The well wasn’t plugged properly, and burning hot water shot from the hole regularly, resulting in the formation of calcium carbonate deposits that grew several inches each year. Now, those deposits have become three otherworldly-looking mounds, multicolored and filled with quartz, and they still shoot hot water high into the air to the delight of spectators. In 2016 the Burning Man Project, whose mission is to protect and restore the area’s natural habitats, including wetlands, natural springs, grasslands, and a beach, purchased the property.

7. Rachel and the Little A’Le’Inn 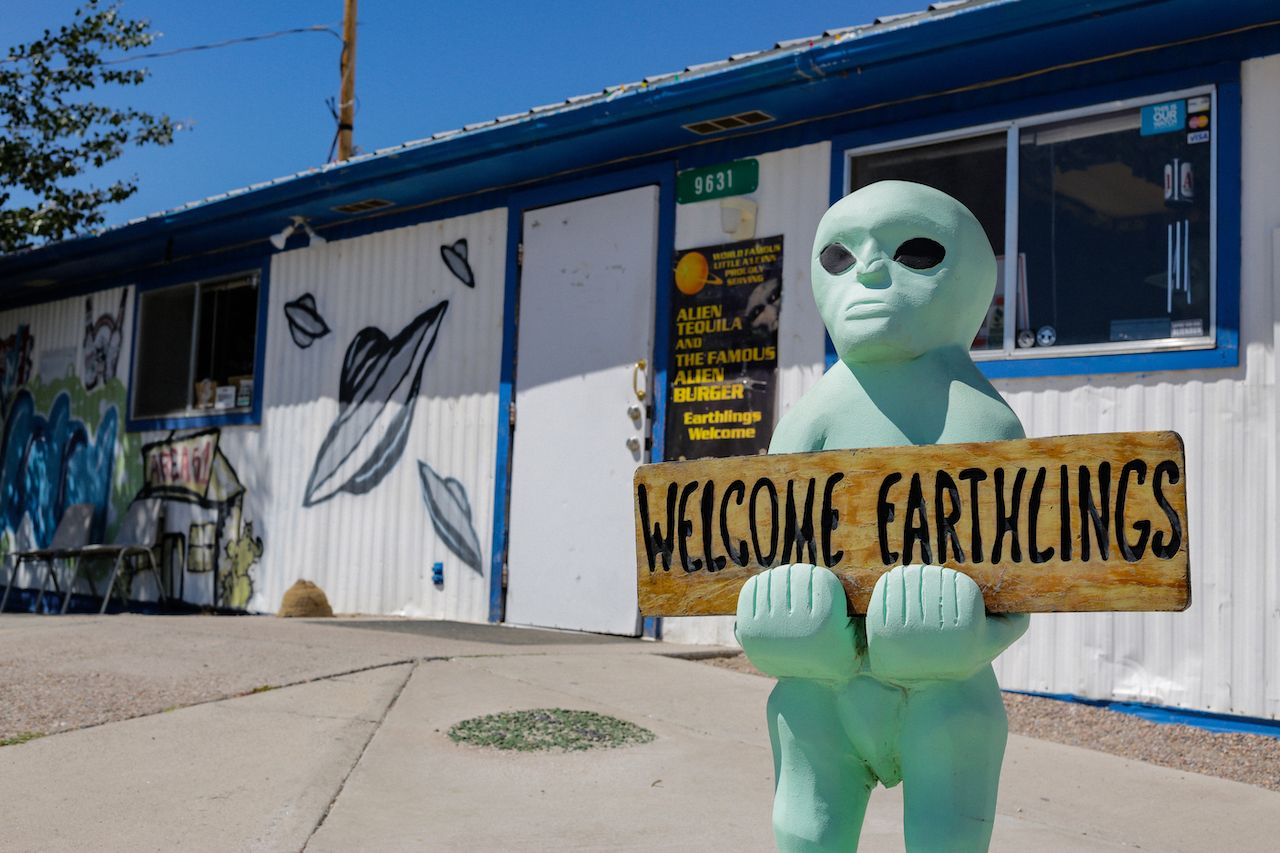 Nowhere has turned extraterrestrial life into a business quite like Nevada. Area 51, an air force base at the center of the country’s most widespread alien conspiracy theories, lies in the heart of the Nevada Desert and is accessible via the Extraterrestrial Highway. You can’t actually gain entry to Area 51 (or get anywhere close), but you can still stop in Rachel, the town nearest to this center of alleged alien activity. With a population of 54, Rachel is well-known among the UFO and aviation community for its Little A’Le’Inn hotel. The inn is decked out in alien-themed decor, including a UFO hanging from a crane outside and photos of UFO sightings. You can also enjoy Alien Amber Ale and buy one-of-a-kind souvenirs. Given the town’s location in the middle of the desert, it’s ideal for stargazing and (of course) UFO watching.

OutdoorSkip the Strip To Enjoy All the Nature Las Vegas Has To Offer
Tagged
Culture National Parks Nevada, United States
What did you think of this story?
Meh
Good
Awesome