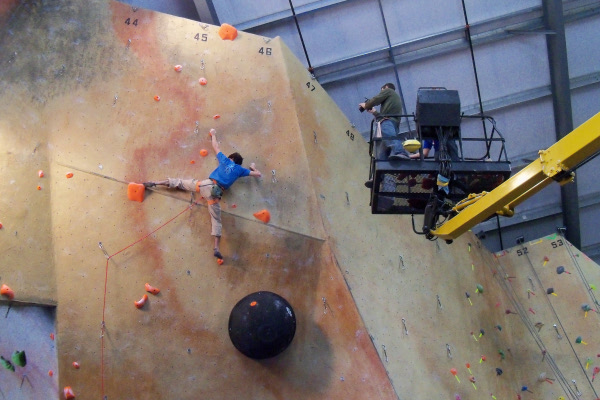 All photos by Adam Roy. All rights reserved.

PAUL ROBINSON AND Vasya Vorotnikov have been working on the problem for a while now. They have the bottom dialed, but they can’t seem to nail the last move, a blind dyno to a small hold above the lip of the wall. After his third or fourth fall, Vasya suggests setting an easier problem.

“We could just make ourselves fall,” he jokes.

“We don’t just want falls, we want you guys trying hard,” says Josh Lowell from behind the camera. “We want grit.”

With their Big UP Productions, Josh and his brother Brett Lowell have made some of the sickest climbing films ever screened, like King Lines and the Dosage series. They’ve come to Central Rock Gym in Worcester, MA to shoot their latest project, an as-yet untitled short film that they hope will make indoor climbing look exciting, accessible, and “visually beautiful.” 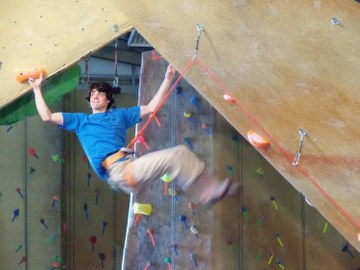 The project started several months ago, when Central Rock owner Joe Hardy came to Big UP with the idea to make a film about gym climbing.

Hardy had seen the Lowells’ films, but had never had any contact with them before calling Josh. “I thought about it for a few weeks before I had the guts,” he says.

Josh was interested. Big UP had filmed segments on gym training and climbing competitions for its movies, and for years, Josh had wanted to make “something really stylized and careful about indoor climbing.”

“There are a lot of people now who only climb indoors. To them, climbing is climbing in a gym,” he says. “It’s surprising that no one’s put the effort in yet to make it look cool.”

After a couple of conversations with Hardy, Josh Lowell and Big UP were in. They got together a cast of four of the best young sport climbers on the competition circuit: besides Robinson and Vorotnikov, Big UP brought in national sport climbing champion Sasha DiGiulian, and 8-year-old competitive climber Ashima Shiraishi. Josh convinced Prana and several other climbing gear makers to sponsor the film, and Hardy offered up his gym for the shoot. 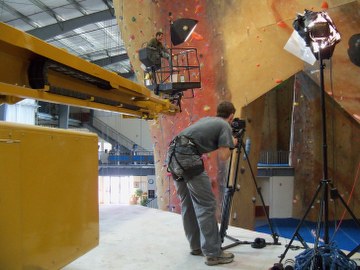 Though Big UP doesn’t have a release date for the film, which will be available for free online, Josh guesses that it will launch sometime in April.

On the day I come to Central Rock, Josh and Brett are filming with Robinson and Vorotnikov. Josh has a black eye and a jagged scar on his temple from a surfing accident in Costa Rica a few weeks ago. He brings me over for a quick round of introductions before he and Brett go off to finish tweaking lights and setting camera angles.

To create the climbs for the film, Big UP has brought in Chris Danielson, a Boulder-based route setter who has concocted problems for most of the pro bouldering competitions in the US. Danielson, who regularly climbs with Robinson, says that his routes are less about imitating real rock and more about “the creative freedom of just making something cool.” 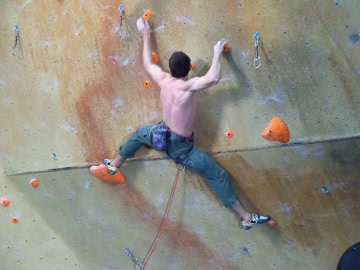 “For me, it’s always about trying to create interesting, kind of showy, spectacular moves that look good,” he tells me.

For today’s route, Danielson has created a heinous line of big, round pinches and slopers that runs up an arch in the center of the gym. It’s basically a roped, 40-foot-tall boulder problem, and it looks hard as hell. Robinson is the first to get up, with Vorotnikov belaying him.

Watching Robinson climb, I can see what Danielson meant. About three-quarters of the way up the wall, Robinson hooks his toes over a large jug and hangs upside down to reach a handhold, a move he calls “the bat hang.” When it’s Vorotnikov’s turn, he muscles his way past the hold, then decides he wants to go back and try the bat hang too before he comes down. 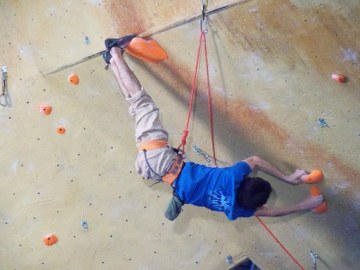 Robinson guesses he’d grade the route about 5.14c. It doesn’t look accessible to me, but it definitely looks cool.

Meanwhile, the Lowell brothers are a two-man film crew. Brett shadows Robinson and Vorotnikov in the gym’s lift, shooting close-up footage from a few feet away, while Josh films from on top of the bouldering wall.

Between takes, Brett fiddles with the lights and Josh gives directions to the climbers, asking them to skip quickdraws or repeat certain moves.

It’s slow going, with Robinson and Vorotnikov spending more time hanging off the rope than climbing. But the vibe in the gym is good, and more relaxed than at most film shoots.

While Robinson waits on the rope, he asks Josh questions about digital cameras and talks about Rastaman Vibration, the highball project in Bishop, CA that Robinson’s going to try to send two weeks from now. 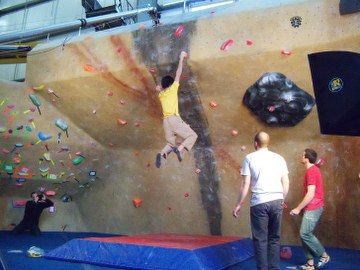 “It’s definitely a really friendly, cool relationship,” Robinson says, after I ask him about working with Big UP. He’s done with the route and is taking a break while we wait for Josh and Brett to move their equipment to the bouldering wall. “I’ve known Josh since I was a super-young teenager. It’s cool whenever we get to see each other, we get to hang out and talk about old times.”

The break ends, and it’s time to boulder. Danielson has put up several problems on the wall, including one in each of the climbers’ styles. I ask Robinson which one is his, and he points to a problem set with crimpy red holds and tells me it’s that one.

We’ll be posting Big UP’s film as soon as it gets released, so keep checking.

If you’re itching to try the sport, check out First Timer’s Guide to the Climbing Gym and How to Get Started Bouldering.