View all travel news
Top Destinations
Top CitiesView All Destinations
Trending Regions
Trending Cities
Load More
Chris Sharma has spent over 15 years pushing the boundaries of rock climbing, and he’s not done yet. Adam Roy sits down with the man himself. 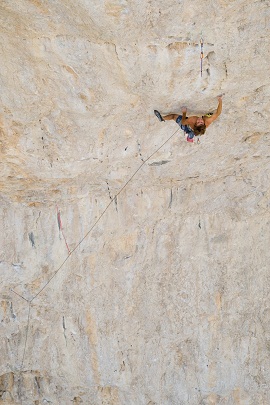 Photo Courtesy of Big UP

WHAT’S LEFT TO ASK Chris Sharma? The question gnaws at me. The night before our interview, I lie in bed and stare at the ceiling, wondering what I should talk about. The blond-haired Californian with the Indian last name has been at the forefront of climbing since he was 14 years old; since then, he’s lived a thoroughly public life. With first ascents of 5.15b routes and V15 boulder problems on his resume, Sharma has practically been installed in most major climbing magazines for more than a decade, and has been the subject of dozens of climbing films. After all that time, is there anything left to discuss?

When Chris Sharma was 13, he made his first first ascent, a bouldery, pebble-studded arete in Pinnacle National Monument that he dubbed Ubermensch. He and his friend Sterling Keene put up the line themselves, hand-drilling the bolts and working the climb for a few weeks until Sharma figured out the moves. Sharma had only been in the sport for two years, but he was already climbing like a pro: Ubermensch went at 5.13d, and was nowhere near the hardest route he had done. Still, Sharma tells me that after he clipped the anchors, he began to look at the world differently.

“That was kind of a realization, that I didn’t just have to wait,” he says. “I can use my own imagination to find these lines.”

Since then, Sharma’s career has revolved around the search for first ascents. He loves the creative process of discovering a new climb, the vision it takes to see how the moves could link together. He refers to his routes as “little mini sculptures” and says he projects them because they have something that inspires him: a brilliant blue water streak; a jutting prow; a perfectly blank section of rock, just short enough for him to launch himself past. He calls them “king lines,” the beautiful, logical routes to the top.

There are practical reasons he makes so many first ascents. When you climb harder than anyone else in the world, how else can you progress? When Sharma was 14, he put up Necessary Evil (5.14c), the hardest route in North America at the time. Since then, he’s pushed sport climbing difficulty with benchmark sends like Realization (5.15a). There was no other way up, no next-level project bolted and waiting for Sharma. So he got used to using power drills, and began to equip lines himself.

“For me, it’s like my evolution as a climber,” Sharma says. “I’m finding new projects all over the world. I’ve gotten to this point where there’s not many left. I’ve got to take the bull by the horns and decide to lay the lines myself.”

Sharma talks about climbing like that, in terms of evolution. It’s not enough to just push the grades; he wants to push the boundaries of climbing itself, change the way it’s done. Anyway, he can only push pure difficulty so far: there’s a limit to what the laws of physics and human physiology will allow him to free climb. Sharma suspects bouldering is approaching the point where the holds can’t get any smaller without becoming “tiny razor blades”; soon there won’t be room to make the moves much harder.

But what if you made the problems longer? There’s room for improvement there. You could stack three or four hard bouldering problems on top of each other and climb them as a sport route, like the new-school testpieces Sharma has put up in Spain. You could push it even further. You could get an extra-long rope custom made and climb a 250-foot wall as one giant megapitch, like Sharma did in California with Jumbo Love. The possibilities are endless. You just have to rethink the way you look at the rock, break away from old conventions and limitations.

It all comes back to imagination. Sharma may not take the risks of Yosemite’s pioneers, but he has the same power of vision that got Lynn Hill up the Nose and inspired Royal Robbins to commit to Half Dome. The ability to look beyond what’s been done and recognize the shadow of a possible, unrealized Something.

Sharma would be psyched to see climbing become an Olympic sport. After all, he points out, there are sports in the Olympics that are “not nearly as cool” as climbing, so it’s a logical choice. He thinks deep water soloing would make the best format.

“One of the problems that climbing has had in the past, when the X Games had climbing in it, is that they didn’t know how to show it in the right way,” Chris says. “You compare it to all these other extreme sports like skating and BMX where people are flying through the air; climbing is more slow-paced and more subtle. Deep water soloing is this really spectacular form.”

He doesn’t buy the objections that climbing would get weaker, and crags more crowded, if it were part of the Olympics. Chris doesn’t consider climbing to be an exclusive club. He’d like to see as many people as possible try it.

“I think anyone who’s climbed knows how much climbing has affected their lives in a positive way,” he tells me. “I think we would all agree it’s a really worthwhile activity to share with the rest of the world.”

Next Page
Tagged
Climbing
What did you think of this story?
Meh
Good
Awesome