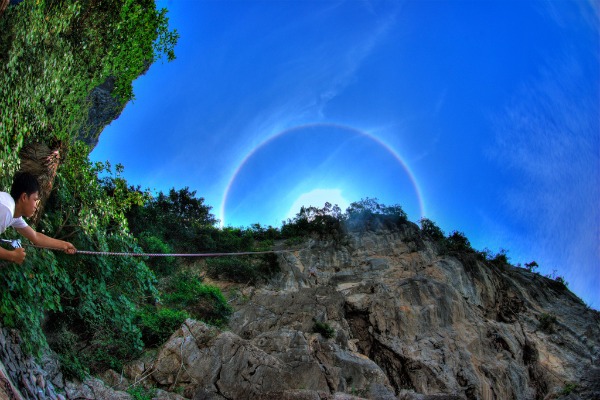 I woke up to a radio playing through a concert speaker out in the street. It was only 6 am. This seemed to happen every morning on Ha Long Bay’s Cat Ba Island; it seemed to me as if it were saying, ‘wake up tourists, go spend your money!’

It was only my first day, but fortunately I was free from jetlag. I had a small breakfast in the hotel, with some very strong local green tea that only grew stronger and less potable as time went on, and headed to the office of SloPony, the island’s rock climbing outfitters.

SloPony is run by two rock climbers, Oslo and Erik, who put up over 50 routes in just two years. Despite being the only climbing facilitator on the island, they offered very reasonable rates and services–renting equipment for the day only cost about $5. Because I had come to the island alone, I signed up for a daylong group boat tour of the islands’ climbing sites. 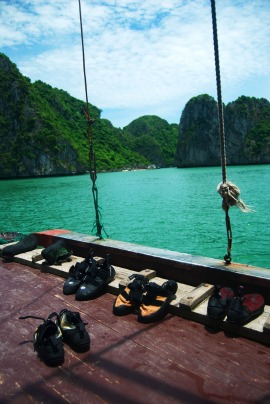 Shortly after signing up, two climbers named Audhild and Cheung, showed up to rent equipment for the day at Butterfly Valley, a thirty-minute motorbike ride outside of town. A brief introduction later, I was outside, renting a motorbike to go with them.

As the name suggests, Butterfly Valley has butterflies. They flew around the valley past grazing oxen and a nearby honey farm where they had to share the airspace with local bees.

The rock face where we were climbing had about twenty routes. In the morning, they were shaded by trees; in the afternoon, the cliff blocked the sun. It was my first time climbing on toprope outdoors and I was relieved when I made it to the top of my first route without falling in front of my new friends.

Cheung, who was Japanese, had only started climbing a few months before. I could see from the way he handled himself on the rock that he had learned fast. Audhild, who was from Norway, was there to remind us that climbing wasn’t just a sport for men. She still had energy for another climb after ours had run out.

We took our lunch at a house called The Bee Hive, named after a nearby bee farm that produced a sweet, mildly tart honey. A huge spread was laid before us: fish in clay pots, squid with lemongrass, fried rice, eggs, spring rolls, and as many lychees as we could eat. The meal was only about $3 per person. We let ourselves digest and snooze in some shaded hammocks while dogs and chickens ran around, occasionally passing below us.

Top of the World

After lunch, I tried sport leading for the first time, and made it up the route without falling. As I clipped my rope at the top of ‘Bread and Butter’, I breathed a sigh of relief, turned away from the wall, and freely hung there while I took in the view.

I could see the shadow cast by the cliff was getting longer, shading an ox in the field below and making its way towards The Bee Hive. This was just the first day on my first-ever trip alone. I had already driven my first motorbike, climbed my first toprope route, and learned to lead climb. 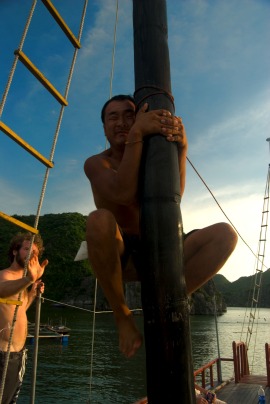 I sensed that Cheung, my belayer, was getting tired of craning his head up. I signaled for him to lower me.

Dominic, a Swiss climber who Cheung had met on a previous trip, joined us in Butterfly Valley on our third day of climbing. Despite being the newcomer in our group, his climbing skills and brash character helped him quickly take a leadership role. As it grew late, he said he wanted to drive towards the coast to catch the sunset.

We bought a beer each and the four of us took off on our rented motorbikes for the west side of the island. We were hoping that the road would be fairly straightforward, but after many curves and false turns we realized that we would never make it to the coast in time. We settled instead for a grassy spot overlooking a pond with palm trees and the mountains in sight.

Our path to the pond was obstructed by a bamboo fence and small family gravesite. By the time any of us could think any better of it, Dominic was already over the fence.

The bamboo fence whined beneath our weight and we cautiously made our way around the ancestral shrine. As we reached the pond, we heard a shout from across the way before we could sit ourselves down. An old Vietnamese farmer was walking towards us from the left side of the pond.

We weighed our options: either we could play the part of ignorant tourists and apologize, or pretend like we were supposed to be there. As if to answer the question, Dominic cracked open his beer.

We waved to the old man, put on our best smiles and pointed at the beers and the sunset. For a reply we got only laughter. On the opposite side of the pond, a girl in her twenties came walking towards us, and us we heard an old woman yelling. We were surrounded. When they got there, their warm smiles communicated to us that we were welcome, and we all sat down together to enjoy the beers and the sunset. 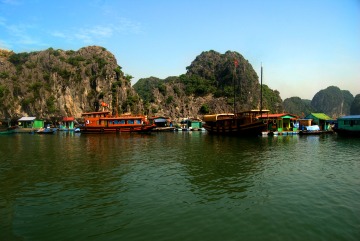 As it got dark, the family invited us to a cup of tea. Their house was one floor and the living room we sat in made up half of it, the walls were painted a light pastel green and covered in parts by a calendar, a certificate, and a family portrait.

We sat on two benches facing each other and ate mangoes and lychees with our tea while making small talk with the family through their English-speaking daughter. The old farmer indicated that he had been a soldier for the north in the American (Vietnam) War. I didn’t hide that I was an American. Judging by their invitation to spend the night, that didn’t bother them a bit.

Sadly, our bikes were rented and had to be returned that night. We said our goodbyes to the family and, after accepting a bag full of lychees, headed back to town. After showering off a day’s worth of sweat and grime, we joined up again for a seafood dinner.

The owner of the restaurant sat with us and preached the merits of gecko-infused vodka on a man’s libido. He shared with us his hopes that he could one day have a third wife who was a foreigner, preferably from Brazil.

“Why do you want a foreign wife?” one of my companions asked.

“So that I can have a tall son to play football for Manchester United,” the owner replied. 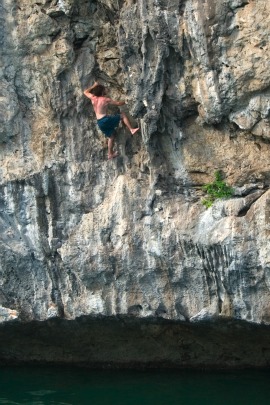 Shadows in the Water

By our last day, the four of us had met a few more climbers and were able to rent a boat from SloPony for just $20 each to do some deep water soloing. With thousands of steep limestone sea cliffs around Ha Long Bay, it made for an appropriate scenic ending to the trip. The next day we would all leave on our own separate journeys, to Hanoi, Sapa, Saigon or Laos.

As the sun began to set, the captain casually steered his boat towards the direction of Cat Ba. Dominic would have none of it, and demanded that the captain wait until after the sunset. The captain and his crew stared at us impatiently as we watched the colors change and the jagged shapes of the islands turn into shadows. They couldn’t seem to grasp what was so special about the sun, the sky and the mountains. They saw it every day.

7 of the coolest US indoor climbing walls