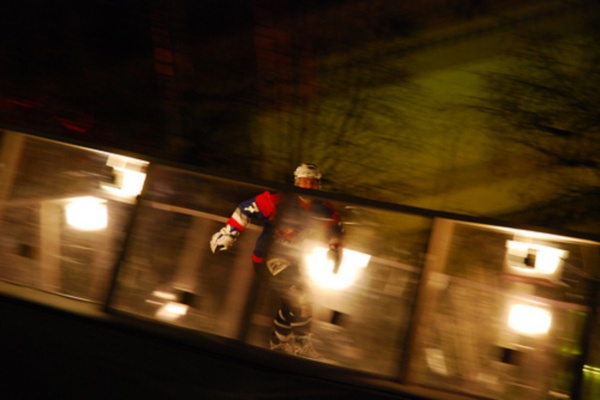 Crashed Ice is making its way to Quebec City for the fourth time, and it’s bringing some chaos with it.

Crashed Ice is an incredibly fast race that mixes downhill skiing, hockey, and boardercross, and it all takes place on a steeply-sloped ice rink.

The sport originated in Stockholm, Sweden, in 2000 and began spreading to other European cities shortly after. In 2003, it arrived in North America, first appearing in Duluth, Minnesota, and then becoming a popular winter event in Quebec City, Canada. Over 85,000 spectators regularly show up, making the sport a fairly big deal for Quebecers.

Groups of four athletes compete against each other on a course up to 500 meters long. The track is narrow, and competition is literally shoulder-to-shoulder. The downhill rink is also set with vertical drops, jumps, and rollers.

Athletes can do whatever they want–push, sprint, wrangle–anything goes. There’s only one real rule: “first to the bottom wins.”

Crashed Ice skaters, who are typically pro ice hockey players, need a pretty varied skill set. Skaters must have quick reactions, speed, the skating skills to navigate the course, and the ability to recover quickly. The whole thing has high entertainment potential for those on the outside looking in, vying to see someone face-plant into the sideboards at 70 km per hour.

Winners move on until the final race, when the victor is named.

The next Crashed Ice event will be presented by Red Bull and is going to be held in Quebec City on March 20, 2010. Still finding it difficult to wrap your head around exactly what this sport is all about? The following video should help:

Tagged
Extreme Sports Québec, Canada
What did you think of this story?
Meh
Good
Awesome

Colorado’s new Palisade Plunge is the ultimate mountain bike mega-trail
For the perfect day of hiking and Colombian coffee, head to Jardín
The 11 World Surf Reserves have the most iconic waves on the planet
How to hunt for mushrooms in Oregon’s coastal rainforest
Witness the stunning beauty of thousands of nesting sea turtles on Oaxaca’s Escobilla Beach

Highlights of a Week in Quebec

The 7 scariest sports to watch, or try, this year

Quebec City is the new Montreal. Here’s why.

Flipping for Quebec City: Bruno Gagnon and his circus company

An ode to Quebec City in the snow [vid]

How to spend a day in Québec City

Where to hike after you’ve finished the Appalachian Trail