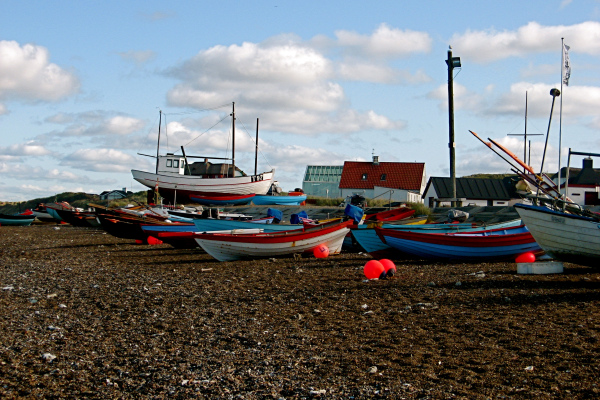 He was standing next to me, both of us ankle-deep in the North Sea and squinting out at the waves.

WE WERE LOOKING at the same things: the scattered line-ups, the neoprene-clad surfers, the building crests that would break and blow out into white soup.

It was getting harder to tell where the sea ended and the gray sky began. The waves were not perfect, and the water temperature was already about 50 degrees in mid-September.

“It looks worse than it is! We’ll be okay once we get out there!” he said.

“I don’t know, Jesper!” I shouted—the only way we could hear each other over the famous Jylland winds, the same ones that were whipping up the sea and creating the biggest swell of the past few weeks. “I don’t think I’m strong enough to paddle out in this!”

Although I had only known him for 24 hours, I trusted Jesper. But more than anything, I didn’t want to disappoint him. I stepped forward, and a gust of wind twisted the board he had lent me out of my grip.

The nose swung by Jesper’s face, barely missing it, and as the board twisted up, I felt the painful crack of the rail against my jaw. 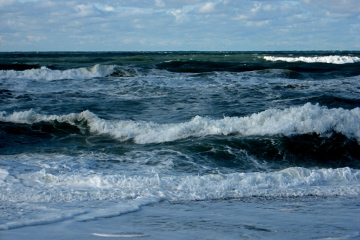 I motioned at him to go out without me and dragged my board to shore, where I sat and watched Jesper duck-dive out to one of the line-ups. The winds continued to churn up the water, and pearled sea foam unlatched from the sand and zipped by me in strands.

I shook my head as I watched Jesper and his friends fight to stay outside of the break line, all for rides that never lasted more than 30 seconds.

Then, I began to laugh. I was shivering on a beach in Denmark in late September. It was the most random place I had ever found myself.

Just days before, I had been on a train from Copenhagen to Skagen when my seatmate and I had started talking. He told me that if I was looking for waves, I needed to go to Klitmoller, nicknamed “Cold Hawaii.” I was intrigued.

After Skagen, I took two trains to Aalborg, followed by a 2 and a half-hour bus ride to Thisted, and a 30-minute bus to Klitmoller. I had no plans in particular, other than to surf. This included not making any lodging arrangements, but I was certain that things would work out once I got there.

What my seatmate had failed to tell me was that Klitmoller, a tiny fishing village that receives unique swells due to its curving coastline, essentially shuts down after mid-September.

During the spring and summer, the area teems with Germans, Brits and Danes seeking its competition-worthy waves. In late summer, local surf club Surfklubben NASA sponsors the Surfjoint Festival, a five-day music and surfing event in the town. As the autumnal equinox draws nearer, however, the water sports enthusiasts all head for kinder seas.

All but a few, including Jesper and his brother Rasmus Fejerskov, owner of water sports outfitter and school Westwind Surf Shop. 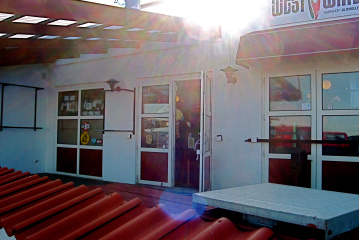 I had popped into Rasmus’ shop when my bus arrived because it was the only business that appeared open and it was thankfully next to the bus stop. He had the unhappy job of telling me that I had picked the wrong time to try Danish surfing. All the winds were onshore that week, and surfing conditions would be poor.

When Rasmus saw my fallen face, he took pity on me and mentioned a couple more-sheltered spots in Norre Vorupor and Aggers, both a few kilometers away. I grabbed a surfboard and hitched a ride with Johnny, an unwitting kiteboarding instructor who had wandered into the shop.

I didn’t have much luck in the water that day, but the Fejerskov brothers took me in. Rasmus offered me his extra room to stay the night, and Jesper promised to take me out the following day. And one day later, we stood on the beach in Vorupur.

Watching the line-ups, I was in awe of the Klitmoller surfers’ strength and love for this lifestyle—so immense, that they lived in this minuscule Scandinavian hamlet year-round and just shrugged their shoulders and went out when conditions took a turn for the worst.

Later, as I sat on shore, Mike, a local longboarder, put his arm around me and shouted that I should come back again, when the winds were better.

In Klitmoller, I never got the sense of territorialism that I’ve found in line-ups everywhere from Puerto Rico to New Jersey. These men made me, a 100 lb. woman from the US, part of their family, pushed me to find courage, and then fed me dinner by their fireplace when the sky went dark too early.

Learn how to paddle out to a surf break and get respect with Matador Sports.

Tagged
Surfing Denmark Copenhagen, Denmark
What did you think of this story?
Meh
Good
Awesome