Alex Honnold and I were eating breakfast in a plushly rustic cafe in a plushly post-industrial neighborhood in lower Manhattan, and we were talking about a tiny village in the High Atlas Mountains of central Morocco called Taghia, where I was due to shoot with Hazel Findlay and Emily Harrington as they explored the huge limestone walls in the area.

We chuckled because interns are funny. I sipped my plush foamy latte and listened as he went on. Yes, “it’s kind of burly,” yes, “the food is, like, kind of repetitive,” yes, “Hazel is, like, kind of a bad ass,” etc. etc. Yes, I knew Honnold was prone to this “kind of” understatement, but now, you know, I know it.

A couple months after our plush conversation in lower Manhattan I was in Morocco. Learning.

The girls raged around the valley, climbing huge routes as hard as 5.12c.

Taghia sits at the bottom of a cirque, just downstream from a place heftily called The Source, where thousands of gallons of potable water spring directly out of a cliff, starting the river that drains the whole region. The river valley is a green jewel in an otherwise mountainous desert. Geologically, water has done a number on the place, carving huge, steep limestone walls that don’t bottom out on a talus slope, as big walls frequently do, but instead drop into slot canyons hundreds of feet deep that are littered with huge boulders. The canyons below add to the crazy sense of exposure. “Like, the topography is kind of extreme,” Honnold had said.

Emily had never climbed a wall nearly as big as the ones around the village, and Hazel had been in the area last year with Honnold, so they didn’t waste any time in getting acclimated to each other as partners, to the stone, and to the style of climbing — long days, lots of steep, chalkless slabs with dusty rock and well-spaced protection. They raged around the valley, climbing huge routes as hard as 5.12c.

While they raged, we ferried loads of fixed rope and gear to the top of their main objective, a 2,800ft route up a limestone extremity that calls out from above the village. It proved to be a lot of work. The mule that helped us get the rope and gear up made terrible noises, and the foam that accumulated around its mouth was green and there was a lot of it. I thought it might die. We split up loads and took over for the mule when the terrain got 5th class, sketching over gendarmes and improvised, miraculous Berber ladders (a frame of cammed juniper branches crammed with stones to make steps or a bridge — you kind of have to see them). It took us days and days and one severe case of shock from dehydration/heat exhaustion/extreme intestinal distress to get the route prepped for shooting. 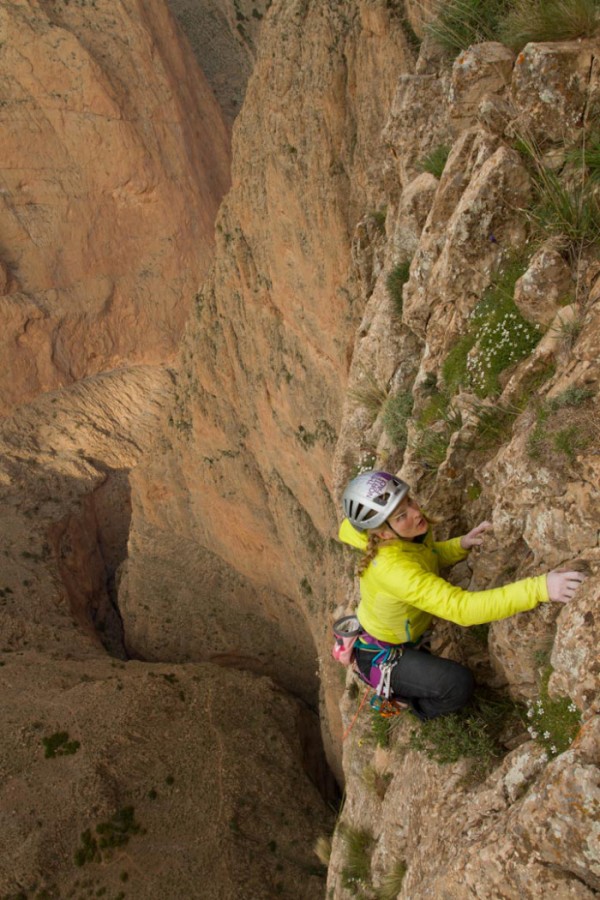 We stayed at Said’s gitte. It’s the Miguel’s of Taghia, just less debauched. Climbers, mostly French with some Spanish, congregate there. The village is tiny and the people are proud of the beauty of the place they’re from. There’s no road in. You walk six miles from the end of the road to get there. And get this — they got electricity from the grid for the first time while we were there, in May.

Residents, perhaps 250 of them, subsist on what they can farm and the monthly sacks of flour from the king (Morocco is a de facto absolute monarchy, one of eight or nine left on the planet). You sleep on a thin mattress on a palette and a bare lightbulb rounds out the amenities. Breakfast is bread. Dinner is tagine, except when it’s plain pasta. The tagine, a sort of stew with potatoes, carrots, and a protein of alternating animals (chicken, sheep, goat) is good. For a while. After a few rotations it’s a little bit grim. “Bring spices,” Honnold had said. We had, and if you go, you should too. Plus some granola and many Clif bars.

After a few days of rest, the girls were psyched and ready to throw down. The list of unknowns about the route was approximately 2,800 feet long, but the idea of an adventure — of getting to the top of the mountain and back down, no matter what — seemed to light a fire under the pair. It was a suitably audacious objective, they thought. Why not just go for it?

Frosty, the director of photography, and Kris Erickson, our local fixer, rigger, and photographer, slept on top of the wall the night before, ready to rap down at first light. I woke up at 3:30 in the morning with the girls. They were anxious. Hazel stewed silently with her tea. Emily quietly peanut-buttered her bread. They braided their hair and brushed their teeth and left through the darkness for the wall.

“12c slab warm up, in the da-ark. Get psy-yched,” Hazel said, before setting off by headlamp. The possibility of a full-route onsight was foiled on the first pitch that morning. Hazel fell victim to a dusty 12c slab warmup in the dark, basically. She bounced off a small ledge below her and spun upside down in a whipper that visibly shook her. But she gathered herself, checked out the moves, lowered to a ledge and climbed through, only to get rebuffed again by a broken hold over a roof. It was clear this route wasn’t in the same league as the others. “I think we’re in for a long day,” Emily said with a nervous laugh.

“That was one of the biggest climbing days I’ve ever had,” said Hazel.

Stacked with difficulty, almost every pitch is 5.12, and those that aren’t are x-ratedly run out. Later, Hazel compared it to trying to go ground up on the Free Rider or Golden Gate on El-Cap, in a day. “It’s not quite as tall, but there’s at least as much, if not more difficulty,” she said. “There isn’t an easy pitch on the route.” The girls flowed for some pitches, Hazel onsighting a dangerously run-out 12c slab and a cruxy 12b pitch. After a long, vicious battle with an overhanging pitch rated 13a, which it looked like she was going to send first try, Emily was stymied by the slab crux that guarded the anchors. Then, Hazel had the same flake in a roof break on her three times. “There’s going to be no holds left soon,” she said.

They were freezing cold, exhausted. Hazel was getting cramps in her hands so bad she had to open her fingers on her leg before crimping down again on the next hold. Emily was bleeding from a dozen places on her hands. They sat on a ledge high on the wall, dejected but determined. It was getting dark. They’d stopped being in a hurry. But they needed some psyche. They had maybe 700 feet of route left to climb in the dark. So what do they do? The answer seems obvious now. Dance party. A full on iPhone dance party on the ledge. Shakira. That terrible Flo Rida feat. Ke$ha song that samples Boy George. Hazel does a dance called the Meat Spin (involves pretending to have a large package between the legs, which you try to rotate in a circle, the package). Emily does one called the Boxer (involves rapidfire punching with crazy face grimace).

It’s sunset in the High Atlas on a backcountry limestone version of El Cap, and these girls are having a slumber party-caliber disco more than 2,000 feet up.

Sufficiently warm and psyched, Hazel climbed carefully past pitches of technical 5.12 and past pitches of 5.11 with three bolts in 60 meters above pure blackness. They topped out, elated. They got brutally lost on their way back down to the village and settled in their beds almost exactly 24 hours after they’d got out of them. And they were psyched. Battered, but psyched.

“That was one of the biggest climbing days I’ve ever had,” said Hazel. “And I think it was the biggest Emily’s had by a long way.”

Emily chimed in. “Biggest day of rock climbing. FOR SURE.”

This story originally appeared on the Reel Rock 7 Blog.

Tagged
Climbing Morocco
What did you think of this story?
Meh
Good
Awesome

11 Side Effects I Had as a Traveler in Morocco