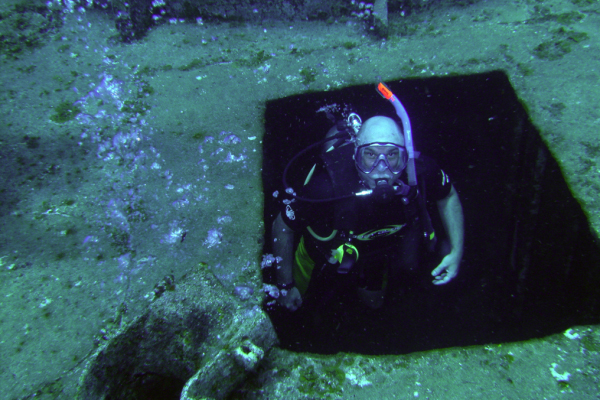 The Great Lakes contain some of the best-preserved shipwrecks in the world. They’ll need divers’ help to stay that way.

PEOPLE ARE ALWAYS surprised when I tell them that I’ve gone scuba diving in Lake Michigan. It’s a prejudice that goes beyond the coast: I know a lot of divers from Chicago who have never been diving in the Great Lakes because “there’s nothing to see.”

The Great Lakes are often called the “wreck diving capital of the world,” and the L.R. Doty, a 112-year-old shipwreck found near Milwaukee last month, is a perfect example of why. In the ocean, a wooden ship like the Doty would have begun degrading the moment it sunk, as marine boring worms ate away at the wreck and currents broke it apart. One hundred and twelve years later, divers would have been lucky to find a debris pile.

In a cold freshwater lake like Lake Michigan, the ship survived over a century intact. Even the corn in the ship’s cargo hold is still there, as are–it’s suspected–the preserved bodies of the ship’s 17-person crew.

They’re more likely to be full of corn or coal than gold, but historic Great Lakes wrecks like the Doty are a tremendous cultural resource. Unfortunately, they’re still targeted by thieves, like the ones who in 1991 stripped ten deadeyes from the wreck of the wooden schooner Wells Burt, which lies just north of Chicago in 40 feet of water.

When I visited the wreck almost twenty years after the theft, divers from the Underwater Archeological Society of Chicago had preemptively recovered loose artifacts from the Burt and chained the remaining deadeyes to the deck to prevent further robberies.

But artifacts from wrecks don’t really belong in a museum, where they often quickly degrade. If we are going to sustainably preserve the Great Lakes’ shipwrecks–or the Red Sea’s shipwrecks, or the Florida Keys’ reefs, or Galapagos’ wildlife–we have to preserve them underwater. The only way to do that is for divers to take ownership of their local sites and create a culture of conservation.

The simplest way to help preserve the Great Lakes’ shipwrecks is to dive one. At a depth of 310 feet, the Doty is beyond most divers’ range, but there are umpteen different boats that regularly visit other, shallower wrecks in Illinois, Wisconsin, and Michigan. I dived with Captain Bob Schak, who runs trips to the Wells Burt, the Mackinac, and other wrecks from downtown Chicago.

Nonprofits like the UASC and the Great Lakes Shipwreck Research Foundation do a lot of good work documenting and conserving shipwrecks, and are usually open to volunteers.

You don’t have to be a diver to get into lake tourism.

What did you think of this article?
Meh
Good
Awesome
Bookmark
Posted In
Diving