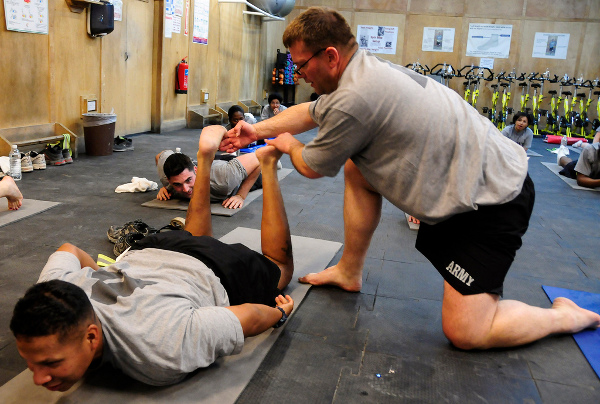 Yoga Bear U.S. Army
Why men have far more to gain from yoga than women.

THE WIFE WAS admiring the patterned capris hanging on the racks next to the desk. She was choosing between the multi-colored floral ones with ankle ties and the more tropical version with splayed banana leaves, rattling on about how she needed to get back into yoga and that these items were going to help her with that.  I wanted to encourage her to go to the local Target instead but just listened.

As she pulled off one of the anklets and held it up against the flowered pants she had settled on, her husband manhandled the door, keeping his shoes on despite our sign which asked for patrons to remove them and wipe their feet before entering.

“You figured out your yoga here?”  His booming voice displayed a very distinct New Jersey accent. “You helping my wife with the yoga thing?” He didn’t seem to be directing his questions to anyone in particular, if they were questions at all. He busily chomped on his gum, running his footballer hands through the Prana tights, his head darting all around the room–making obvious moves to scope things out. With a quick swoop, his sunglasses were off, and as he rocked back and forth on his heels, hands on his hips, towering over me. 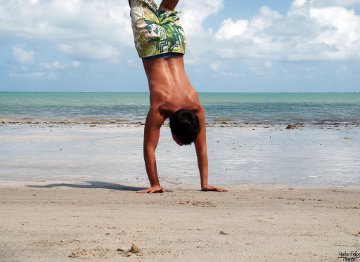 I let my eyes linger on his sand-covered flip-flops before I met his gaze. “Yes, this is a yoga studio.”

“Yeah, I hear good things about you guys. My wife here–she likes doing this yoga stuff.”

“You should come too.” Realizing that implying that this hyperactive, 6’3″ gym-abuser could use yoga more than his wife might offend him, I modified my statement. “I get a lot of guys in my class. They love it.”

“A lot of the men who come are bigger than you–big athletic guys.”

His wife’s head snapped around, speaking up for the first time since he made his presence known. “Guys who are bigger than you! Could that be possible?” Her sarcasm made me laugh.  The smile previously plastered on the husband’s face faded, and he stormed out.  I saw him pacing outside with his Blackberry pressed to his ear, as I rang up his wife’s order.

Most dudes do, yet unfortunately for them the zeitgeist of modern yoga culture seems all female-centric. One needn’t go further than the merchandise racks at any yoga center to see that.  Nary have I seen a pair of men’s Lululemon DownDawg shorts among the booty shorts and floral yoga mats that pervade most mainstream studios.

The irony is that yoga has traditionally be been a male-oriented system.  Arguably the most popular and important yoga masters are men, including, but not limited to:  Sri Krishnamacharya, whose teachings inspired BKS Iyengar, Krishnamacharya’s son, TKV Desikachar, Sri K. Pattabhi Jois, who popularized Ashtanga yoga, Dharma Mittra, a former Brazilian bodybuilder turned literal yoga poster child, and John Friend, the Anusara yoga creator to whom the New York Times Magazine devoted a feature two weekends ago. 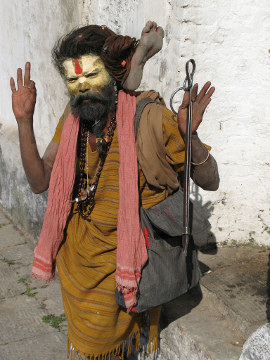 Some of the traditional styles were used to rein in unruly school boys in old India, and many young girls were inherently excluded. So what gives in the Western world, especially considering that half the men on the above list are not Indian?

Recently, Yoga Journal, another industry bible, ran a feature asking the general question:  “Where Are All The Men?”  Their answer:  There are cultural, physical and emotional hurdles that Western men in general need to overcome–namely, that doing yoga means being OK with vulnerability, that men are physiologically wired to be less flexible, and that they also have a biological wall grasping yoga’s central anti-competitive tenet.

On top of that, many of the men studied felt that they couldn’t relate to leggings-clad male instructors, making them feel more reluctant to join in.  In that sense, the YJ article is a no-brainer.

What YJ fails to mention is that–if the above obstacles are really a problem–men probably have even more to gain from the practice than women, particularly in cultures that value machismo, like Latin America (or the Jersey Shore).  Yoga traditions are centered around calming the body and using poses as a form of meditation, cleansing, and inner focus.

That inner focus means being in the present and dropping goal-oriented ideals.  It also means letting go of insecurities and ego.  According to tradition, “ego” is one of the greatest obstacles to achieving ultimate happiness and understanding.  This held all too true for the husband that I encountered who threw a tantrum after being encouraged to do yoga triggered his insecurities.

How do we get guys like that to do yoga, especially in places where studios do not have the Starbucks-like ubiquity and trendiness that they do in major cities? 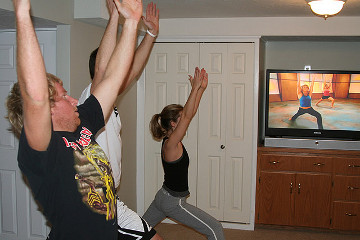 For one thing, marketing and attention is everything. YJ as well as other yoga and health publications rarely display men on their covers, except for a few lithe ones grinning at the camera.  I would love to see athletic–or dare I say “jocky”–men balancing in eagle pose.  It happens.  I had the surprising pleasure of having one of my larger male students hand me back his blocks before splaying out in Hanumanasana (yoga’s version of a front split), something I can’t do properly without support.

My classes are also about 70% men and growing, particularly the ones down on the Jersey Shore.  I’m not making big breakthroughs, but I’m also aware that my clients are more concerned with beach bodies than the spiritual teachings and flowery language that makes many men’s eyes glaze over.

I am convinced that the first step is getting anyone–especially the guys–to the mat and breathing properly, as well as the importance of equal hands-on attention to everyone.  The men seem to be the ones who are most appreciative, particularly after I’ve coached them into positions they never thought possible.

Second, more studios should offer “male-only” yoga (and not the nude variety that’s popular in New York). If prenatal classes are available for a small subset of women, then classes made for an especially-shy population of men should also be available to help build students’ confidence and understanding.

Learn how to bring your practice with you on the road here.

Tagged
New Jersey, United States India
What did you think of this story?
Meh
Good
Awesome

In Mizoram, India, the shops have no shopkeepers