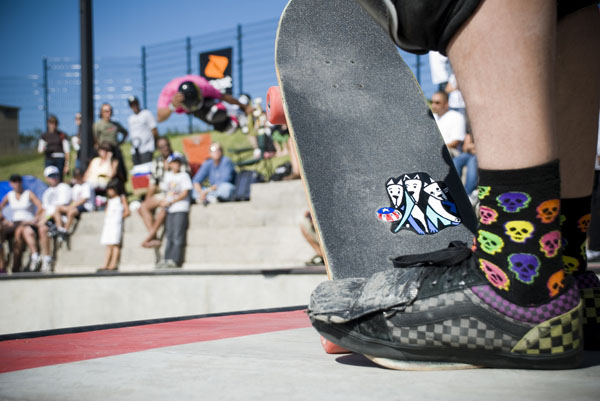 Photo above: Rafael Resendiz / Feature photo: Alvaro_Tapia
In the shadow of the pyramids, on the banks of the Nile, amidst the congested streets of Cairo, a skate scene is emerging.

“There wasn’t really a scene back then,” explained Omar Herrawi, one of the founders of SkateIMPACT, Egypt’s first and only on-line skate shop. “Just two or three skaters here and there who didn’t really know each other.” 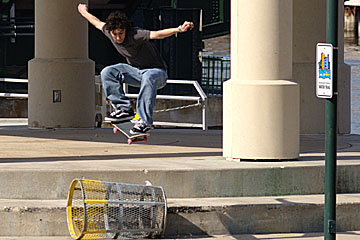 Cherif, Omar’s younger brother, started skating in 2003. The two started trolling chat rooms and using MSN to connect with other skaters in Egypt. Of the twenty-five skaters they dug up on-line, one was nurturing the skate scene with his enthusiasm and passion for the sport: Yehia Ossama.

Yehia brought the Alexandrian and Cairene crews together for the an unprecedented free-for-all skateboarding session planned and coordinated via the Internet but played out on the streets of Cairo. This would become the protocol in Egypt’s skateboarding subculture for hooking up with other urban artists.

The Herrawi brothers took the next logical step and formed an on-line forum to plan more sessions and connect with more skaters. When the need for spare skate parts became painfully apparent the brothers would oblige (with some help from Dad) and take on the role of suppliers.

Eyes follow me thundering down the road, much like they must have when the Dogtown Z-boys first rode the cement waves that summer in 1970.

With improved access to skate equipment — you can now get a new deck delivered COD within 24 hours (before it took a month) — local skaters have been able to raise the level of their game.

Despite the progression of skateboarding in Egypt today, it’s still a lot like it was in California in the 70’s. When I skate through Maadi — probably one of the most westernized parts of the city — jaws drop. Eyes follow me thundering down the road, much like they must have when the Dogtown Z-boys first rode the cement waves that summer in 1970.

Some Cairenes smile when I roll by, give me the thumbs up or yell, “Meya, meya!” Others get scared, shoo me away, or warn me that I can’t “play” there. One time, after a grind across some stairs at the Metro Sakanat station, a stout, matronly woman wagged her finger at me and yelled, “This is Metro, not club!”

“From 30 skaters before SkateIMPACT, to 250 now and over a thousand registered on the website, the scene is really growing,” noted Omar in a recent email.

First Impression, SkateIMPACT’s soon-to-be released skate video, is filled with local talent and “100% Egyptian spots.” It should keep everyone fired up and stoked out until the Nokia Totally Board extreme sports extravaganza hits Marina’s Mediterranean shores on the 15th of August. If corporate backing is any indication – this could usher in Egypt’s first skatepark.

Currently, City Stars, Tiba Mall, Nasr or Rehab City are the usual suspects in the line up of hot spots for SkateIMPACT organized events, such as Go Skateboarding Day, but check their website for more details. 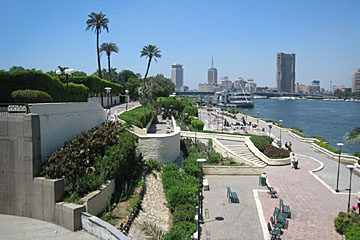 14 year old expat skater, Carter Brown, along with his friend Reaford Crow (15) and his little brother John (13) have — with some help from their parents — taken the matter into their own hands by building ramps in Maadi.

“I’m so glad we got this,” says Carter pointing to the 3 ft. tall mini ramp, railslide and kicker ramp in the backyard of his parents Digla home, “but Dubai has four skateparks and one is even air-conditioned. We can’t exactly expect to get to an X-Games level of competition or hope to host the games like Dubai did in 2005 if my backyard in Maadi is it for all of Egypt.”

“It’s true,” Reaford said. “I mean, every place we go, they kick us out. They think we’re ‘playing’ and that our boards are toys. They don’t recognize it as a sport, let alone an art form. How are we supposed to progress in an environment like this?”

The future of skateboarding in Egypt, however, does not depend on the generosity of the government or the willingness of corporate sponsors to cash in on it (although those factors have been key in getting skateparks in the U.A.E. & Oman up and running). It depends on the motivation of those who actually make the scene: the skaters themselves.

So the next time you see someone on a board, appreciate the moment for what it represents — an urban movement growing through the cracks on the rough streets of Cairo.

Grind the pink granite benches and sail across the silky-smooth surfaces in front of the Mogama (a Kafka-esque, bureaucratic behemoth of a building across from the American University). A crowd of curious (and vocal) onlookers is guaranteed.

Ollie the stairs, pop nose-slides and wall ride the opulent marble just behind this landmark hotel along the banks of the Nile. Watch out for the security forces here – they can sometimes be less than amiable. 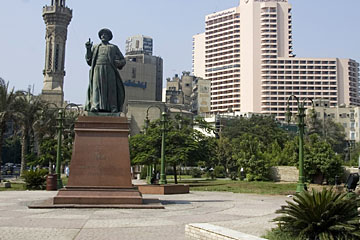 Homesick for the anonymity of the West? With the highest number of expat skaters in Cairo, resigned acceptance from the locals and the only mini-ramp in town, Ma’adi feels about as close to the West as you can get this side of the Nile. For the exact whereabouts of the mini-ramp, check out Sk8boarding in Cairo on lonelyplanet.tv.

Paranoia has worked in our favour here. There’s a five-block radius closed off to traffic; local businesses suffer but skateboarders can session here without the ubiquitous fear of being mown down by a Peugeot.

Skate across this 1930s bridge from downtown into Zamalek (Cairo’s version of New York’s East Village) and partake of a Cairene ritual: the Evening Promenade.

Tagged
Egypt
What did you think of this story?
Meh
Good
Awesome

This small and remote Scottish island is looking for new residents
The most beautiful and emptiest state parks in New England
‘Accidentally Wes Anderson, The Book’ is a nostalgic mix of colors and symmetry
The Eurovision Song Contest is finally coming to the US
Travel ideas for your 2020 summer trip Promoted