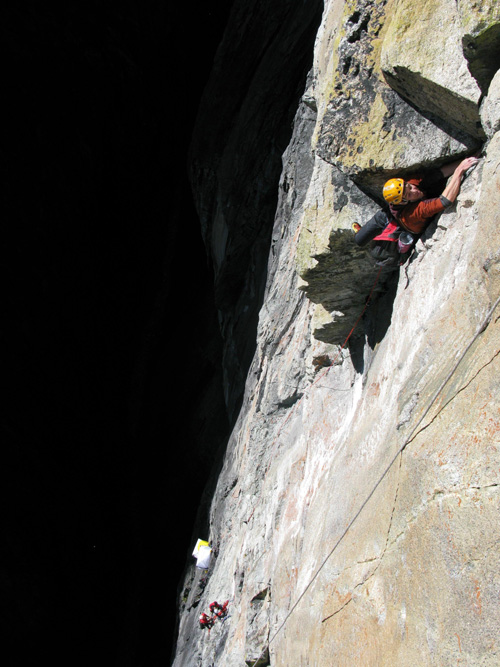 With a team put together from around the world, Conrad Anker, Kevin Thaw, Jimmy Chin, Alex Honnold, Renan Ozturk set out to climb a massive jungle wall in Borneo.

EVEN THE APPROACH to this place is unreal. Instead of a typical climb (which involves an approach before the ascent), the the group had to make a 1,500 ft rappel down into “what appeared to be a bottomless cavern” just to reach the base of the wall.

This precluded them from having a standard base camp. Instead they had to make a series of “commutes” to fix the pitches, then make a final commitment to “living on the wall,” where life was based out of two portaledges hanging thousands of feet in the air.

In this series of video dispatches, these climbers take us through this amazing ascent.

“From our basecamp high above the route morning routine involves dropping a similar distance into the valley then climbing up the opposite side. After coffee, of course, the team rappels 1200ft to begin a jumar to the high point and press the route further. ”

“Thus far we have seven pitches fixed: All overhanging with the ropes dangling far from the cliff. Back down at the end of the day then up the ropes back to camp has been the routine. Tomorrow (April 16th) we’re heading up to commit to life on the vertical plane and stay en route until concluded. Hauling all necessary food, water, portaledges and necessities for an estimated four days of precipitous living! We’re all psyched and ready for the transition.”

“Living on the Wall”

The commute from base-camp on the ridge is over: the team commits to the wall. Life in the vertical world is based out of two hanging portaledges.

Stay tuned for the ascent, coming next week!

Tagged
Climbing Malaysia
What did you think of this story?
Meh
Good
Awesome