I can still remember the day I bought them. I was 13, walking down the aisles of REI with a wad of small bills in my pocket from a summer of lawn mowing and mulch shoveling. For Christmas my parents had given me a day of ice climbing with a guide in New Hampshire’s White Mountains, and I was there to gear up.

As a young kid who had fallen in love with climbing on the boulders in my corner of
Massachusetts, ice climbing felt like the real deal. I felt like once I had sunken ice tools into a frozen waterfall, I could really call myself a climber.

After looking through climbing books and magazines, I decided what I really needed for this venture was technical base layers, clothes that would wick moisture away from my skin. I had read that Patagonia was making underwear out of a fabric called capilene. Capilene supposedly wicked moisture from the skin, dried quickly, and was totally recyclable.

I was looking at long johns when some Hawaiian hula dancers caught my eye. They were printed on a sea-green pair of boxers. Somehow, having a ridiculous pair of boxers appealed to me. I picked them up and looked at the tag. They were woven from that golden fleece, capilene. 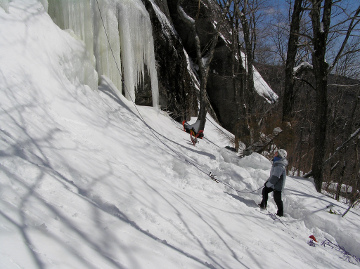 The boxers accompanied me on that ice climbing trip. I spent the entire day on an ice flow barely steeper than 60 degrees. It was full of other climbers enjoying a mellow day out, some of them even smoking mid-climb. It was obvious to me that the climb wasn’t nearly as extreme as I had made it out to be, but it didn’t matter. I had ice axes in my hands and crampons on my feet. I felt like a rock star.

From that point on, climbing was part of my life, and those boxers were there every step of the way (luckily or not, my body had finished all its growing by the time I was 13, so they still fit). The boxers were with me on rock and ice from the Northeast to the deserts of Nevada. They were passed off as shorts on long approach hikes. They wicked up beads of nervous perspiration as I tackled my first splitter crack on Cannon Cliff in New Hampshire.

I’m pretty sure even the hula girls laughed when I emerged from ice climbing Hobbit’s Couloir with such a thick pile of powder resting above my eyes that I looked like a bushy-browed 90 year old. I didn’t find out until later that my partner had been deviously kicking snow down on me during the entire climb.

Every time I had the opportunity to travel the hula girls made it into my bag. They
doubled as a bathing suit in a sinkhole at Chichen Itza and scrunched up beneath my wetsuit the first time I went scuba diving. They survived 26 hours of travel on the way to a semester abroad in Tanzania, where they hung from clotheslines in the Serengeti and on the rim of the Ngorongoro Crater.

Before starting the homestay in Tanzania, all the students were told that their homestay mamas would most likely generously ask to do our laundry, but that it would be considered inappropriate if we handed over any underwear. Then, as I came walking back to the house one day, I saw the hula dancers waving overhead while my mama was hunched over doing other laundry. She greeted me warmly as always. I told myself the boxers were so ornate she probably thought there was no way they could be underwear, and joined her inside for tea. 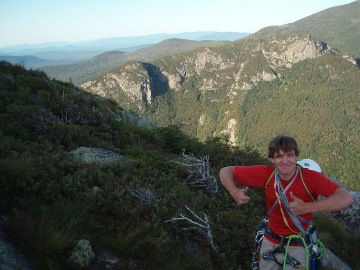 Over the years I accumulated more of these boxers. Every time I found them
on sale, I would snatch a couple pairs. Flowers, ice axes and rope coils, gnomes, squirrels playing Frisbee, migrating salmon, and lizards running through the desert complemented my hula dancers in what became a fairly eclectic underwear drawer.
I racked up enough of those luxurious undergarments that I could wear them every day.

Sadly, after nine years of loyal service, the hula girls have begun to show their age. The magical capilene fabric is still going strong, but the waistband is spent. I was in denial of this fact for some time, but after some very uncomfortable “bunching,” for lack of a better word, it was too obvious to ignore.

Capilene is 100% recyclable, but I could barely stand to part with my hula girls. I debated what to do for days. I could sew them into a quilt and turn it into a family heirloom. I could burn them atop Mauna Kea so the hula girls’ ashes could settle in their homeland.

Finally, I realized I was being selfish. If I let those finely-aged fibers be melted down and spun into another generation of undies, who knows where they could end up?

Maybe they’ll clothe the arses of climbers much more talented than I. Maybe they’ll summit Everest, or tackle the Eiger, or put up a new big wall route in Pakistan. Perhaps they’ll cradle the crotches of environmentalists and save acres of rain forest or revolutionize sustainable agriculture. Those briefs could be destined for greatness, and I don’t want to be the one to hold them back.

Goods wants to hear about your favorite gadgets from back in the day.