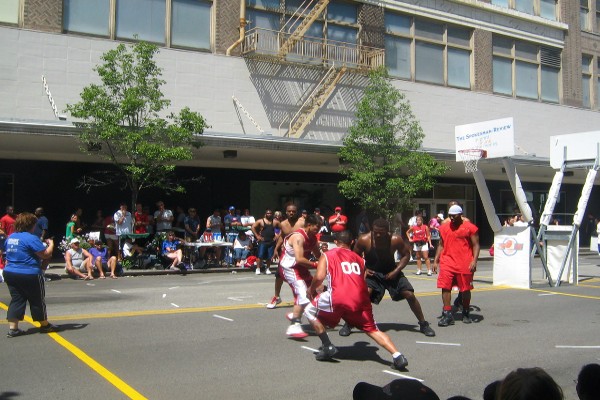 The buzz around the Inland NW this spring involved one of basketball’s greats: Kareem Abdul Jabar would open Hoopfest this year.

FOR THE UNINITIATED, Hoopfest is Spokane, Washington’s claim to fame in the sporting world. The downtown area transforms into linear lines of asphalt basketball courts the last weekend of June.

This year one of the game’s icons, Kareem Abdul Jabar, was coming to the largest 3 on 3 street basketball tournament on the planet. His quote the night he hit town pretty much sums up the event: “I’ve never known a town to give itself up to gym rats.”

Streets closed on Friday evening. Volunteers broke out the tape and started marking out half courts along each street along arterial reaching toward the University District and over the Spokane River. There were so many teams signed up that an in-town tunnel and bridge were needed for court space.

Saturday morning the action began, with marathon playing that led up to the championship Sunday evening. This year, Hoopfest’s 20th, 7400 teams played on 448 courts. 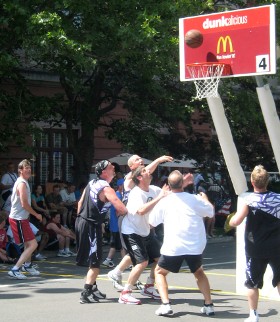 Making a basket as the crowd looks on.

Hoopfest caters to every age, gender and skill level of “baller.” Retired NBA players, college athletes and individuals hoping to reach those levels mix it up.

Most teams have four players, the sub rotating in as needed. Play varies a bit from a typical pick-up game: two pointers count for one and three pointers for two. Players call their own fouls with a court monitor making certain nothing gets out of hand.

One game I watched , tied at 15 all, got pretty serious with the monitor trying to keep things under control as a couple of policeman hovered court side. It ended at the free throw line and luckily Spokane’s finest were not needed.

It’s all long shorts and sleeveless tees, some very clever team names on the shirts. “Vote for Pedro,” gave a nod to the cult film Napoleon Dynamite set in southern Idaho. “3 Cougs and a Duck,” was donned by a college aged girl. Not sure whether she was the lone Duck, hailing from the University of Oregon, or one of the Washington State Cougars. 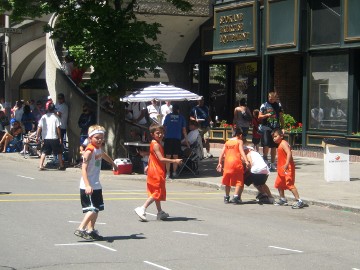 It’s one of the most spectator-friendly events I’ve attended. Watching the youngest teams play is addicting: scrappy second graders, their center of gravity low and close to the ball, their faces showing all the intensity of the older participants, a Coach/Dad telling his team of pre-teen girls they’d played a great game even though they lost.

As I walked through downtown all I heard were basketballs bouncing on pavement, the sweet swish—“nothing but net”—and classic rock or country songs blasting from the PAs of sponsor radio stations. Because of Michael Jackson’s recent death, selections from Thriller were regular fare, MCs calling out for spectator’s best moonwalk. But this was all side show. Kareem got it right: At Hoopfest, the gym rats rule.

Why Spokane Is the Pacific Northwest's Next Big Spillover City

Bicycling the 'Recreational Trails of Idaho'

Boys on Blades: The US Men's Figure Skating Championships