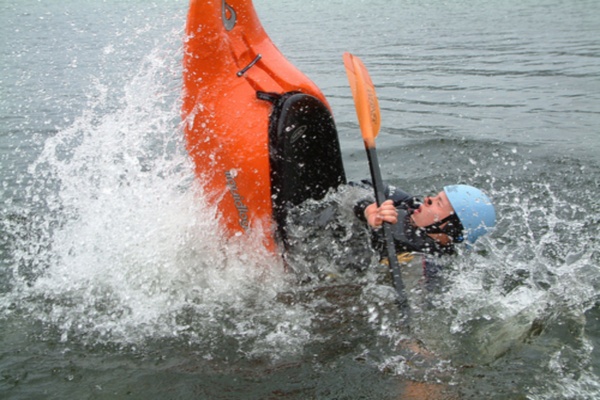 PLAYBOATING is the art of using various whitewater features such as waves, holes, and eddylines to surf and perform tricks. Depending on the size and power of the features, playboating can look spectacular, or relatively boring to someone observing from the shore. But when you’re out in the water, playingboating–no matter what the size of the waves–feels incredible.

Playboating has surged in popularity over the last 10 years for various reasons. One is boat design. New boats allow paddlers with relatively basic skill levels to perform moves that took high levels of skill in boats designed just a few years ago.

The second reason is that traditional river running requires a higher commitment of time and resources. To run a river you have to set up a shuttle (leaving a vehicle at the bottom or a person who will pick everyone up at the takeout). Because playboating usually happens at just one or two particular features on a river, many playboaters have adopted a new kind of paddling style called “park and play,” – you just drive to a spot, walk in, and spend as much time as you like.

Whitewater kayakers and canoeists have been playing for as long as they’ve been running rivers. The earliest forms of playing, the old-school, was basic front and back-surfing of waves and also doing “enders” – plunging the bow or stern of a boat under a wave-hole or hydraulic, and then using the trapped buoyancy to shoot out of the water (video of ender here).

Back in the early 80s, two brothers from West Virginia, Jim and Jeff Snyder, along with a small crew of other slalom racers and kayakers, began pioneering a new kind of boat design–the squirt boat–which had such low volume that it enabled the paddler to tap into the river three-dimensionally instead of just using the surface currents.

This was a turning point, essentially the birth of modern kayaking. Ironically, as squirtboating itself continues to be a very small subculture of whitewater paddling, many kayakers and canoeists today have never even heard of it.

Throughout the 90s, kayak manufactures took elements of squirtboat design and applied a new concept, the flat hull. Traditionally, kayaks and canoes had rounded hulls for stability. Departing from this tradition gave kayaks and canoes the ability to “plane” on top of waves and holes, allowing paddlers to spin, and, with low volume ends, cartwheel.

To make these moves easier, boats began to get shorter and shorter, leading to today’s modern playboat design. 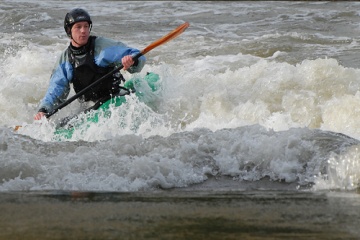 David Miller wrote a how-to on Getting Started Whitewater Paddling that serves as a good guide for playboating as well.

The number one rule is “safety first.” We recommend beginners start out in classes, learning basic boat / edge control and rolling.

While most playboaters paddle just for recreation’s sake, some take it more seriously. “Rodeos”, or playboating competitions, are not hard to find in the US, though many paddlers just use them as an excuse to party.

Here are a few more things to consider before jumping into a new boat, as suggested by 1997-1998 Freestyle World Champion, Ken Whiting.

Choose a Great Playboat: Take time to test out various boats to see which one works best for you.The boat should be comfortable and tight-fitting.

Always Keep the Paddle Active: Keeping the paddle in the water will prevent the boat from spinning out of control. Boats used in playboating are designed specifically for spinning and freestyling, so it’s important to have control at all times.

Have a Great Paddle: Keep a wide grip, and use a shorter paddle to keep your elbows bent at a 90-degree angle.

Be Aggressive: This one ties in with “keeping the paddle active”: playboaters cannot be timid, and it is important to maintain good posture and stay upright in the boat. Lean forward at the hips, keeping them loose to control the boat’s tilting.

It’s impossible to understand how wild the sport is without seeing it. This footage comes courtesy of Playak.

Skip the lesson and learn how to roll a kayak online, or try some other great water sports.

7 underrated spots in the US for stunning fall colors beyond New England
For the perfect day of hiking and Colombian coffee, head to Jardín
The tallest, spikiest, and most colorful cactuses you can see in the Southwest
The most underrated, crowd-free national monuments in the West
The most beautiful and emptiest state parks in New England

The 10 most unique places to go kayaking in the US

Rafting the Zambezi on the scariest whitewater rapids in the world