AS A CHILD, 40-year-old Eric Larsen dreamed of becoming a professional camper and for the past 15 years he’s done just that. By developing the necessary skills to get there as a whitewater canoe guide, dog musher and backcountry ranger, he can now call himself a Polar Explorer and Expedition Guide.

After successful trips to both poles–including the first-ever summer expedition to the North Pole–Larsen decided to aim bigger and the Save the Poles expedition was born. In 2009, he set out to become the first person to visit the South Pole, North Pole, and summit of Mount Everest in one 365-day period.

Now that he’s back from his record-setting trip, he’s working on a movie “Colder” and a book about his yearlong adventure. He also agreed to answer a few questions about expedition life. 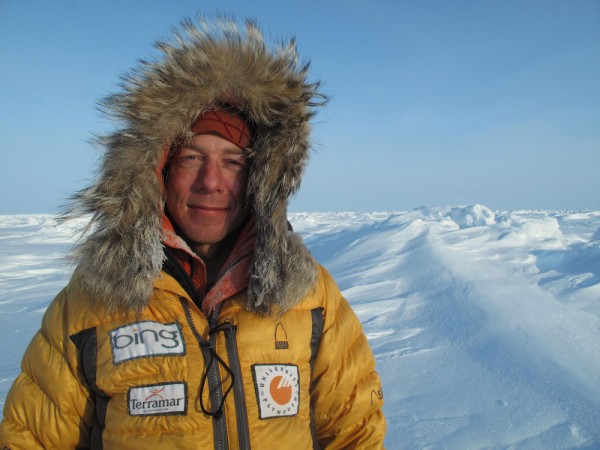 [JB] Your expeditions are all based around the earth’s extreme points. What originally drew you to the Arctic and Antarctic?

[EL] I’ve always have been fascinated with winter and the variety of snow and ice that exists on our planet. I also read a lot about polar exploration as a kid and I wanted to know what it was like in those types of extreme environments.

How do you compare traversing Antarctica, reaching the North Pole, and climbing Mount Everest?

All three are dramatically different places. Antarctica is a continent, so the snow and ice is relatively stable. We’re traveling there in summer, so it’s 24-hour daylight as well. Temperatures are pretty mild -10 to -25 [degrees Farenheit], but the wind chills are brutal.

The Arctic is an ocean so all the ice is floating [and] moving on water. It’s a lot colder, too, -20 to –50 [degrees Farenheit] and humid so it’s really difficult to keep ice from building up in your sleeping bag, clothes, etc. There’s open water that we sometimes have to swim across as well.

Climbing Everest is very different than polar travel. While there is more imminent danger–avalanches, ice-fall, altitude–you also get more of an opportunity to rest in between climbs.

In terms of obstacles, which segment was the most difficult to complete? The easiest? The most unexpected?

If I were to rank from most difficult to least: North Pole, Everest, [then] South Pole, but none of these expeditions were easy. If you do anything for nearly two months in such an extreme environment, it will wear you down completely.

As I said, North Pole was by far the most difficult–the cold is so intense and the obstacles keep stacking up–pressure ridges, open water, thin ice, and polar bears.

Just the simple act of setting up a tent and camping is an extreme effort. Plus, the ice is constantly moving so every day is something new. 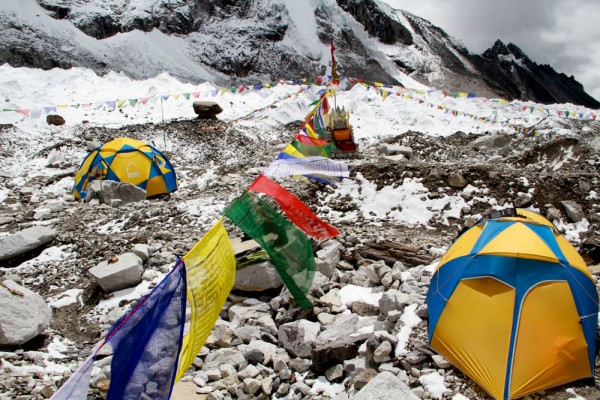 Watching the trailer for “Colder,” there seems to have been a few Oh shit, I might die here moments on thin ice. How you minimize risk and stress in these situations?

One of the things you have to realize is that risk and stress are constant on an expedition like this. There are very few “safe” situations. So a big part of reducing stress is to simply accept a certain amount of risk. Of course, you can actively reduce risk by training, increasing skill level and understanding the environment.

My goal is to always try to be as safe as possible. So I am constantly assessing and reassessing the conditions, how I feel, my hydration, energy level, overall warmth, weather, whatever… It’s easy to feel like you’re in control but it’s important to realize that you’re not. 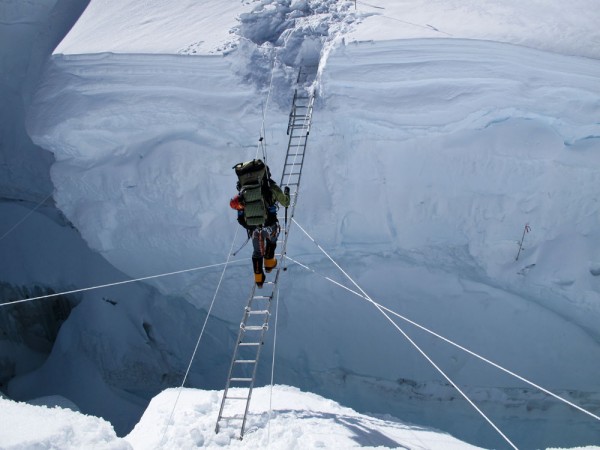 Crossing a large crevasse on the way to Camp 2.

You’re not shy about marketing your gear sponsors in your writing and blog. Why is it important for you to show what gear you’re using?

First of all, good gear is a critical part of the success of an expedition so to me, mentioning a product name is like talking about a teammate. I choose the gear I use very carefully so I definitely want people to know why I have made certain equipment choices as well. 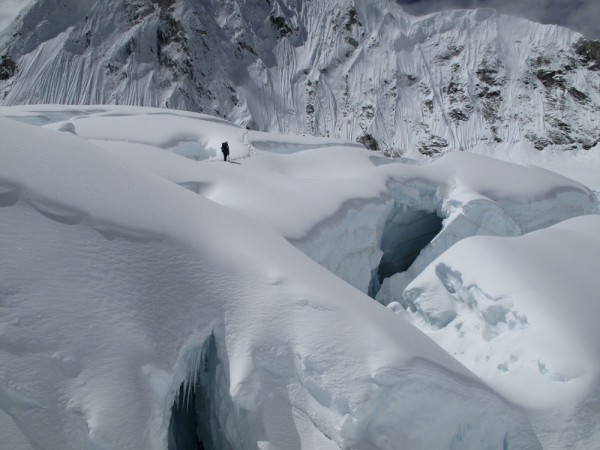 Nearing the top of the Khumbu Icefall on the way to Camp 1.

Who are your best gear sponsors?

They’re all my best sponsors. Seriously, it’s hard to pick just one; I’ve been working with many of these companies for so long that they have become more friends than anything else.

Terramar has been such a huge supporter – from amazing base layers to financial support to advertising. I worked with Sierra Designs to create an entire new system of gear for polar travel, which was critical to our success.

I’ve been with MSR/Therm-a-Rest for nearly a decade and I can honestly say there isn’t another company out there who reaches their standard of quality. I’ve also got some new partnerships that I’m really excited about too – Yak Trax and Ergodyne!

You are a member of Explorers Club. Does being nominated to join such a group objectively help your career or is it merely an official recognition for your commitment on previous journeys?

It’s a pretty minor prop in the grand scheme of things, but still an honor.

Prior to your expeditions, you held several adventure jobs including whitewater canoe guide in Colorado and Park Ranger in Alaska. How did you make the transition to full-time adventurer?

Very slowly and with a lot of hard work–and I don’t even know if you could call me a full time adventurer–I still do a lot of different work [and] jobs to make a living. About ten years ago, I took a job as Education Director for a dog sled expedition and education company and then had a few lucky breaks after that.

I’ve always tried to learn new skills and do more. With some of my initial sponsorships, I did a lot of things for free to establish “value.” 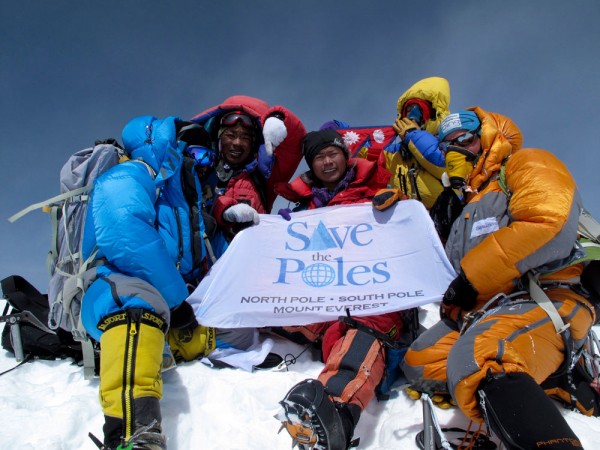 What can readers learn from your transition to turn their own adventure dreams into reality?

Begin with one step. It may seem impossible at first, but with enough planning, preparation, training and hard work, we all can accomplish some pretty amazing goals.

What past or present explorers do you admire most?

There are so many! From the past: Roald Amundsen and Ernest Shackleton are two explorers who were incredible adventurers, leaders and people. More modern day: Will Steger, Rune Gjeldness [and] Richard Weber. That said, I’m a fan of all kinds of different people who are involved in creative and unique projects.

The goal with all my expeditions is to try to connect people with places so that is a big part of any adventure that is next. I also want to continue to help protect our environment for future generations.

After that, 2012 is going to be another big year for me. My plans aren’t set in stone, but I’m thinking of Gasherbrum II in Pakistan and another trip in Antarctica.