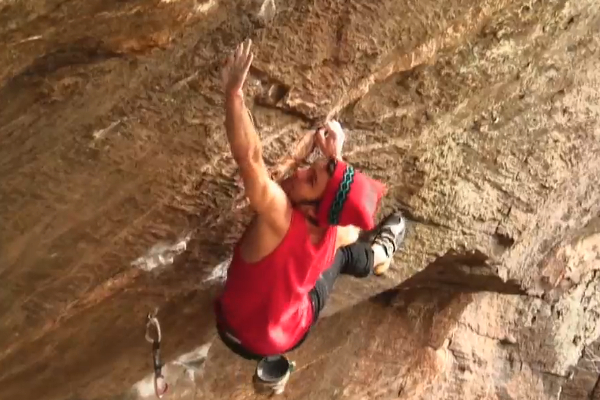 The climber pictured above, Max Zolotukhin, has just lost his handhold. He has no rope.

FOR THOSE OF YOU WHO haven’t heard the story, on October 18th, Zolotukhin suffered an accident while attempting a ropeless ascent of Supernova, a 5.14b route at Rumney’s Starship Wall in New Hampshire. Taylor de Lench, a filmmaker and friend of Zolotukhin, was on site to film the climb for his upcoming film SICK: Climbing in New England.

In the video, Zolotukhin starts out strong, making his way through some half-dozen moves with no apparent problems. Then, at about twenty feet up, his hand slips from a hold and he falls. From there, the video becomes genuinely unpleasant to watch.

“The second I hit I knew things had gone wrong,” writes Zolotukhin on the Boston Rock Gym’s blog. “My foot was facing due west instead of straight ahead like a normal foot should.”

But besides broken bones, Zolotukhin got something that very few free soloists get – a second chance.

“My lessons were clear,” he writes. “DON’T be overconfident; DON’T assume that everything will be okay.”

As a rule, there are no second tries in free soloing: there are sends and there are accidents. A significant chunk of the discipline’s big names, like John Bachar and Derek Hersey, met their ends in climbing accidents, most of which could have been avoided by the use of safety ropes.

The accident has provoked discussion within the climbing community about what constitutes responsible free soloing. Online, many climbers have emphasized the importance of a good attitude to free soloing and highballing, with some pointing out Zolotukhin’s own admission that he pushed himself to climb the route despite not feeling sure of his ability to do so.

World-class free solo climbers like Alex Honnold are legendary for being cool-headed even under the worst pressure, and it’s not hard to see why. When all that separates you from a fatal fall is your grip on a dime-sized nub of granite, you’d better not flinch.

Still, it’s difficult to talk about safety in a discipline defined mostly by its rejection of safety equipment. As Zolothukin’s friend Gavin Heverly writes on his blog, not even experienced soloists can escape the danger.

“[Honnold’s] free-solos are awe-inspiring and downright impressive. But they are also mind-numbingly stupid,” writes Heverly. “Dying doing something you love is in a way amazing. But…I mean, wouldn’t you rather CONTINUE to do what you love?”

Is free soloing worth the risk, or is it inherently irresponsible? Tell us what you think in the comments section.

Alex Honnold ‘Peer Pressures’ Norwegian Climber Into Free Soloing With Him on Wild Rock Face
The 11 Hardest, Most Dangerous Mountains To Climb in the World