The Missouri River was named after a Native American tribe — Missouri meant “people with wooden canoes,” and their river was the lifeblood of the region’s transportation, agriculture, and trade. The Missouri has since been dammed, redirected, and diluted, but it is still the central vein of the United States and the longest river in North America.

Like the river, 56-year-old Janet Moreland found her way to the state of Missouri from the West. Her journey to has taken her through many states and communities. She is formed of the rocks, rifts, and roughness that she has come up against. She is a force of nature, and every day for three and a half months until late July, she is waking up to be a part of it. 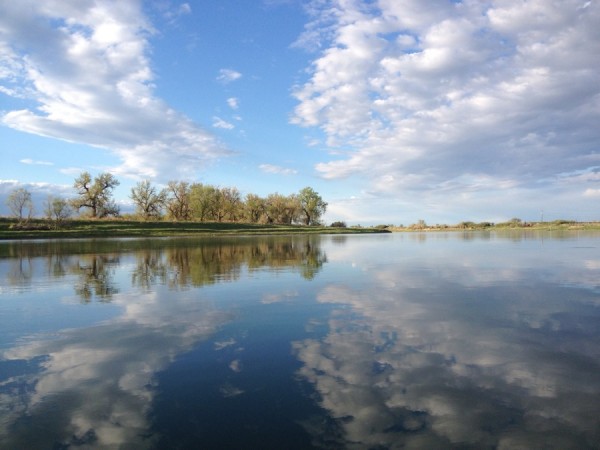 Moreland launched her kayak about two months ago in Three Forks, Montana, the headwaters of the Missouri River. As she’s advanced from Montana on her blue Eddyline kayak, “Blue Moon,” she’s portaged around the fifth-largest earthen dam in the world. She’s smelled cottonwood trees and irrigation runoff and manure. She’s seen wild, unfettered nature where West meets Midwest and conservation meets capitalism. And she’ll continue, day by day, until the river, and her journey, end in St. Louis, Missouri.

The travel writer William Least Heat-Moon paddled the Missouri in 1995 while writing his travelogue River Horse, about traveling the US coast to coast by water. In River Horse, Heat-Moon discovered an intimacy with the human and natural landscapes of the US that was intrinsic to river travel. He observes that,

River travelers, even ones not poetically inclined, soon begin to conceive the water as friend or foe, to view it as possessed of a will, and at times even a primitive mind capable of acting companionably or inimically.

The river will be Moreland’s sole companion along the trip and a constant in her struggles and triumphs.

Moreland isn’t intimidated by solitude or shy about challenging her physical limits. She once spent two days in backcountry Yosemite avoiding avalanches that were falling around her almost every 30 seconds. She is brazen; her bright blonde hair and blue eyes seem to electrify when she talks about adventure. She’s got a strong build indicative of a life lived outdoors. On the journey, she’s eating fruits and nuts and dried, pre-packaged meals. She prepared it all before leaving her home in Columbia, Missouri, for Montana. It was the first road trip Moreland and her 23-year-old daughter Haley took together since they left California when Haley was 4.

Moreland grew up in Northern California, proving herself branch by branch, racing up trees after her brothers. She was the wild one, always allowed to be outside and run around freely in ways many of her pre-teen peers couldn’t. She was the daughter of a retired Air Force officer and a homemaker mother, who kept their four kids at a distance, creating room for them to develop independently and unconventionally. Janet became more outdoorsy than her brothers and met her best girlfriends playing sports in the first girls leagues and clubs of 1970s California.

Two days after graduating high school in a suburb of Sacramento, Moreland took off for Arcata, California, and Humboldt State University. On the first day of her third semester she dropped out, and shortly after moved to Hawaii, where she worked at a Chinese coffeeshop, hung out with hang gliders, and lived in the most remote part of the island without electricity or running water. After Hawaii there was Yosemite, where she fell in with a group of rock climbers that lived in a backcountry shack with a wood-burning stove.

At the time, she was dating legendary rock climber Dale Bard and mastering backcountry skiing routes while he created climbing routes. Other adventures included: a climb up the 14,389ft Mount Williamson in the Sierra Nevada and a descent on skis; a stint as a salmon fisher in Alaska; becoming the first woman ski patrol at California’s Bear Valley; a move back to the Bay Area to practice wind-surfing. It was in San Francisco that she got married, had Haley, and continued to live with the zeal of an uninhibited adventurer. 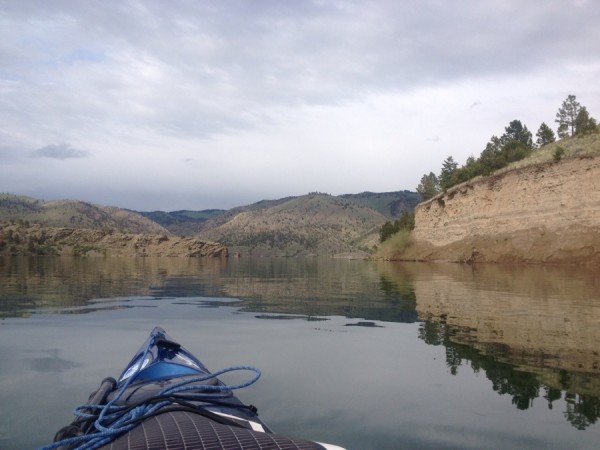 Moreland has been kayaking the Missouri River for 11 years now. She came to Missouri to help her ailing father, which meant leaving the mountains and ocean that had been her playground for the flat landscape of Middle America. Then she found the river.

She bought her first kayak at a recreational sports store in Columbia, and after she’d paid she told the salesman she was taking it onto the Missouri. Had he known that before, he would have discouraged the purchase. People were not kayaking the stretch of the river just outside of Columbia like they are now. When she pushed out onto the river, she cast herself into the tight-knit community of nature lovers, musicians, artists, and bohemians that have made the river’s banks their home.

Moreland served breakfast at Cooper’s Landing, a general store and restaurant at a boat launch, then began pursuing a degree in education from the University of Missouri. In 2006, Moreland was cooking breakfast at Cooper’s when guidebook writer and international kayaker Dave Miller pulled in for a bite. Miller got Moreland thinking about taking on the full river in her kayak.

This was idea further stoked several years later when she met Norm Miller, unrelated to Dave, who had been paddling the Missouri for several weeks, going 12 to 70 miles a day depending on conditions. He had dislocated five ribs pulling his kayak out of the mud and dealt with a host of weather problems and lost equipment. All of this intrigued Moreland, and Miller offered to help her if she ever decided to kayak it. They kept in touch, and he continued to fuel her interest in paddling the river by affirming that she would become the first recorded woman to do it solo.

For the first part of her journey, the 1,300-mile road trip to Montana, Moreland had Haley with her. The radiator in their car blew out along the way, and they had to stop for high winds and camp at a truck stop in Wyoming because of snow. Several truckers and mechanics helped them get the assistance they needed free of charge after hearing what Moreland was setting off to do, and all are hoping that her river journey is smoother than her road one.

In an interview with PBS after his paddling odyssey across the US, Heat-Moon said, “Going up up up against twenty-five hundred miles of the Missouri River, I can testify that it’s one of the most arduous trips that anyone can make on this continent and yet I had a power boat to do it in.”

In only her kayak, Moreland will have the power of her curiosity, her body, her adventure lust, and the companionship of the river.

Tagged
Paddling United States
What did you think of this story?
Meh
Good
Awesome