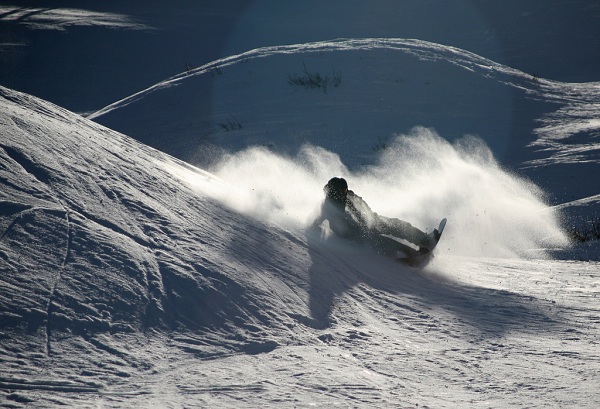 Benita Hussain expounds on lessons gleaned as a surfer trying snowboarding for the first time.

When Park City Mountain Resort recently invited me to Utah to learn to snowboard, my friends and colleagues fawned at the opportunity. My surfing friends told me I would be a natural. Others commented about how lucky I was to be learning on some of the best powder in the US, on some of the same moguls and mountains of the 2002 Olympics. Mostly, though, people warned me that my bottom would be sore for days. 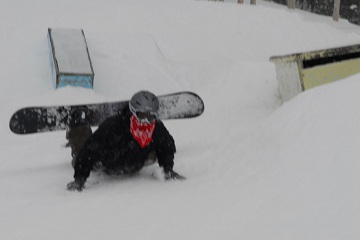 My friends were about one-third right. After that week’s experience, I have gleaned some take-away lessons for similarly mediocre surfers–those of us with some fear of speed and broken bones–who would like to try surfing’s winter counterpart. They are as follows:

1. Do not listen to anyone else, especially surfers better than you. If I received $1 for every time a surfer who told me that snowboarding would be “easy” or “intuitive”, I wouldn’t have to take a press trip to afford snowboarding in Park City. Not surprisingly, it turns out that the only way to know whether you’re good at snowboarding is to actually do it.

While my instructor, Kyle, did say that I was progressing faster than the others because of my background—I could perform toe- and backside j-turns early in the lesson–he also informed me that I had some bad habits I needed to unlearn. Bad habits whose outcome would, as Kyle would later put it, “smart real bad.” 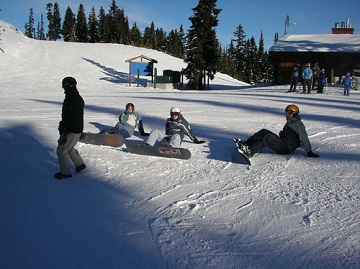 2. Stop using your back foot. This was my hardest habit to shake, since leaning on my trusty goofy foot is necessary for bottom turning on a wave, but more importantly has been responsible for preventing many a nosedive into a sandbar or reef shelf. So when faced with picking up speed while strapped to the snowboard, my first inclination had the normally even-keeled Kyle scolding me with a little less kindness as the hours passed.

“Lean forward! Forward!” he’d holler from behind me, as I felt my increasingly less-reliable left foot spin out from under me.

When sliding downhill, the front of the snowboard is naturally the first to stick. Placing pressure on the front foot then helps to harness the friction, allowing for easier steering. When surfing, the fins help catch the most surface area of the wave’s face, so steering takes place off the back foot. This is the intellectual explanation of how to prevent injury in snowboarding.

As most snowboard instructors can attest to, beginners rarely follow their brains. Add an old habit to the mix, and the results can be brain-jostling. 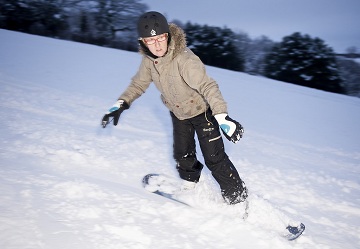 3. Falling on snow hurts more than falling in the water. Yes, I had been warned about the bruises and sore legs. I accepted the advice but dismissed it in silence because, let’s be serious: I have sliced my leg open on a surfboard fin, had urchin quills embedded in my toes, bounced along broken seashells, and dislocated a finger with a wayward leash.

I thought that bending my knees and taking a dive once in a while on the fluffy Park City powder would be a cakewalk. This would have been true if I had known how to handle Lesson #2.

No amount of training can prepare the new snowboarder for hitting his or her ass on a well-traveled beginner slope, and nothing can hurt a surfer’s ego more than seeing 5 years olds zip by on skis. Some suggest that padded snow pants are useful for those less endowed in the bottom region. When I next go, I may decide to invest in a pair. Until then, I will have a hard time sitting down.

4. High altitudes limit oxygen. One thing I never thought about was the crippling lactic acid build-up in my quads, stemming partially from the lack of oxygen that non-mountain people often forget about. My complaints about burning quads also made Kyle snicker. 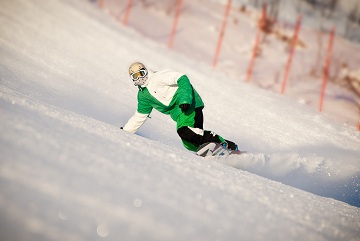 5. Do utilize as much surf gear as you can, especially if you’re strapped for cash. As someone who prefers the tropics to the temperate zone—even though I now have a begrudging acceptance of Atlantic Coast surfing—I was not about to drop $500 on a new snowboarding outfit. One might argue that if I had boned up for the extra waterproof, ultra lightweight (and padded) pants, coat and gloves, I might become more than a fair-weather snowboarder. To those of you, I have one word: Neoprene.

I have spent hundreds on wetsuits and cold water accessories, and I’d be damned if I was spending an extra penny on more gear, especially if this would be the only weekend they’d see the Rockies’ light. Plus, there is no more room in my New York City studio closet for additional sporting goods, nor was I prepared to pay to check extra baggage. Instead, I pulled on a neoprene rashguard under my jacket, which kept me toasty and mobile without adding much weight.

If I had remembered to bring my wetsuit mittens, I could have avoided borrowing Kyle’s during the 3-hour lesson (bless him) in exchange for my acrylic knit ones.

For my lower body, thick yoga leggings layered under track pants suited me fine. We travelers are a resourceful bunch. 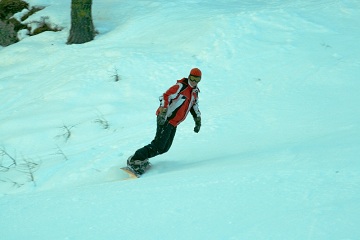 My conclusions were these: I’m not as tough as I thought I was, and snowboarding may not be for me. Having my feet attached to a board defeated what I love most about being in the water: the freedom of having little equipment and clothing encumbering me. This is not to say that I won’t try snowboarding again, and I do believe that having a private lesson on Utah powder spoiled me. At least I have some idea of how much I’ll need to unlearn after the next three seasons of warm water sessions.

If you’re uninterested in snowboarding, check out some reasons to try snowshoeing this winter on Matador.

Colorado’s new Palisade Plunge is the ultimate mountain bike mega-trail
For the perfect day of hiking and Colombian coffee, head to Jardín
Beyond the resorts, Colorado’s lesser-known mountain towns are the next big destinations
The 11 World Surf Reserves have the most iconic waves on the planet
The BLM is here to serve our public lands, not just big business

From lift reservations to face masks, skiing will be different this year