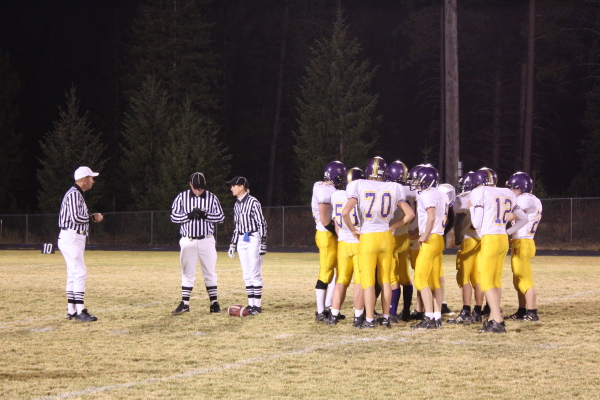 Reflections of an unconventional referee.

IT’S A LATE AUGUST AFTERNOON, and the weather is warm, downright hot in the sun. Above my right shoulder, I hear an unusual sound. It takes a couple of seconds to locate the screeching osprey, perched in its nest on the light at midfield.

Today, everyone in the fish hawk’s view is dressed in the same monochromatic colors. Teenager athletes are in full uniform, half in white jerseys, the others in black. The coaches wear shorts and t-shirts. Football season starts in a week.

Good thing this is a scrimmage game, because my hat is wrong. Everything else is right: athletic cleats, white and black socks, white polyester knickers, and the signature black and white striped shirt. My ball cap is black with a trout on it: somewhere between my house and the high school the black hat with the subtle white piping didn’t make it into my gym bag. 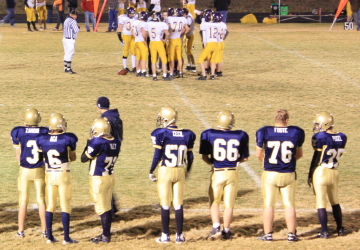 For 13 years, I’ve officiated high school football. I started in the mid 90’s in remote Great Basin towns in Nevada and Utah. I was recruited by guys I watched Monday Night Football with, who said I knew the rules better than they did.

Any girl raised in Wisconsin during the Lombardi era with the Green Bay Packers had to, really.

When I came back to Idaho in 2007, an off-hand comment about my officiating past carried beyond the walls of the sports bar one post-game September night. Within a week, I had been called by Idaho’s Division I football commissioner. Did I still have my gear? Would I be willing to take the exam ASAP and get back on the field for the rest of the season? I answered yes to both questions.

Being a lone female football official is an interesting way to see small town America. When I show up at a new school there’s often panic in the Athletic Director’s eyes. “Where is she going to dress?” they say to no one in particular.

The shortened version of my name is often misspelled on their paperwork: “Chris Olson” must be a guy. If the game is close to home, I come “in costume” to avoid such uncomfortable moments, but the knickers itch on long drives. My fellow officials are used to it, smiling slyly at me as I’m escorted to a separate changing room. 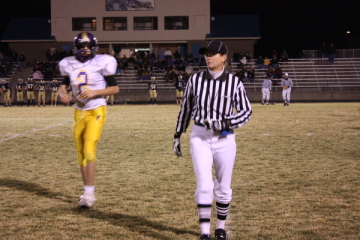 Because of my uncurvaceous, parallel frame, players often don’t know my gender until I throw a flag and they hear my voice for the first time. Their wide-eyed expression comes with a sincere exclamation as they return to the huddle: “That’s a GIRL!”

My decade-old SUV has thousands of miles on it, traveling to small schools with dreams of gridiron glory. For some, it’s a good season if they win their homecoming game. I haven’t encountered any other aging tomboys of my kind, but this year the captain of one junior varsity team is a girl, and a damn good lineman.

I have memories of being called names no male official’s ears have heard. My favorite involves speculation on my sexual orientation happening simultaneously on both sidelines one crisp fall Saturday in Wendover, Utah. The line judge and I, who by then had worked wings together on many games, made a bet on when someone would say it out loud.

Before we could settle the wager with a cold beer, my identity would suffer yet another mistaken assumption. Seeing my boyfriend kissing me while I was still in uniform after the game created a scandal for the largely Mormon community: the Intermountain Sports Officials Association had obviously hired an openly gay zebra.

We can call ourselves that, “zebra”, but players had better not. I’ve witnessed some other referees lose their composure, throwing a flag for unsportsmanlike conduct against any teenager daring to call us such.

Maybe it’s because I’ve seen zebras in the wild, but I find it endearing. I only give a quiet warning, wink and get ready for the next play.