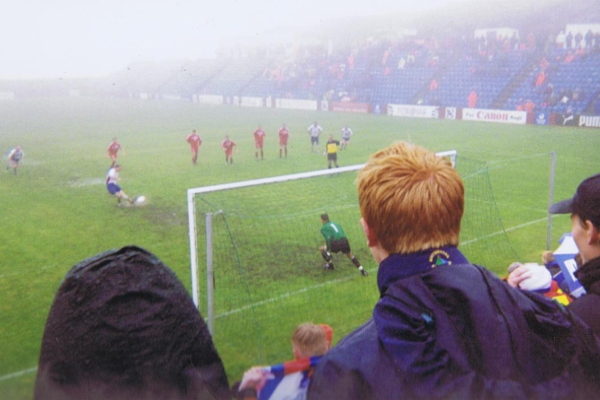 The coach threw a football shirt and boots at my feet and watched impatiently as I pulled them on. “Now get out there and show us some English grit!” he yelled.

I RAN OUT ONTO the pitch just in time for the national anthems, the flag of Luxembourg emblazoned across my chest.

Singing along to a song you don’t know the words to can be embarrassing, especially if it’s a national anthem. To my left stood a line of nine Luxembourgers, all proudly belting out “Ons Heemecht” to the small group of onlookers in the main stand of Tórsvøllur (Thor’s Field) stadium, where I had been sitting five minutes before. I mumbled my way through the song, avoiding looking at the TV camera as it made its way down the line of players.

My three friends and I had been traveling around the Faroe Islands for a week. On this day Clément, my French companion, had been eager to be in the capital Tórshavn to join a team of Luxembourg football fans in a match against their Faroese hosts. The following day, the real footballers would be taking to the field in a World Cup qualifier, and the two sets of supporters had decided a pre-match kickaround would be marvelous fun. Unfortunately for the Luxembourgers, they were a man short, and they plucked me from the stands to make up the numbers.

Why this very unglamorous match was being shown on Faroese television was a mystery to me. Perhaps they had anticipated the massacre that was coming and wanted the whole country to witness it. For an amateur match, it all seemed rather excessive.

Lining up at right-back, I surveyed my teammates, who aside from Clem I had never met. It was not a promising sight. Clem was the only one of us who looked like a footballer, short, but well-built, and quick on his feet. The rest of us were scrawny rabble. 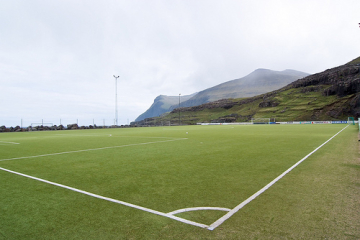 We spent the next 90 minutes being flattened by the Faroes. Their first attack was horrifying: Gunnar Mohr, a Faroese striker and ex-international, sliced through the defense and unleashed a shot that almost decapitated the keeper before going in the net. The small crowd went wild as the stadium announcer proclaimed the time at the first goal as just thirty seconds. It only got worse from there.

As the match progressed, I got the feeling that our coach was beginning to regret having chosen me to represent his country. Not only was I unspeakably crap, misplacing passes, falling over and running in fear from Gunnar Mohr, but my loyalties were elsewhere. Deep down, I wanted the Faroes to win, and thanks to me they were doing so comfortably.

By half-time, the score was an eye-watering 9-1. Luxembourg’s coach was furious, and refused to speak to me. It was clear that he wanted to haul me off, but had no one else to take my place. Feeling guilty for having let him down, I decided to put my Faroese loyalties aside for the next 45 minutes.

Back on the pitch, my first contribution was to scythe down one of the Faroese midfielders. I didn’t mean any harm, but as my boot met his ankle, I heard a sickening smack. As my opponent got to his feet, I realized he was none other than Tróndur Vatnhamar, a goalkeeper for Faroese league leaders B36 Tórshavn and kids’ TV presenter. He was a giant of a man, and angrily pushed me in the chest for upending him. Suddenly, things didn’t seem so fun.

A minute later, we were the best of friends. Tróndur took the resulting free kick himself and curled it sweetly into the top corner, drawing whoops of joy from everyone present. He ran over to me and shook my hand, thanking me for giving him the opportunity to score such a stunning goal.

After that 10th goal, the mood relaxed. The Luxembourg coach and players started to enjoy themselves more. This new outlook resulted in four goals for our side, all scored by Clem against a tiring Faroese defense. The final score was 11-5, in the Faroes’ favor.

After the game, the players from both teams sat in the center circle, chatting merrily, singing songs, and swapping shirts. From nowhere, bottles of champagne emerged and were passed around. I was personally thanked for at least five of the Faroes’ goals; one of their men asked if I would be playing for Luxembourg’s real national team in the next day’s game.

“With you in their team, we cannot lose!” he explained

The anticipated goal-fest the following day never happened. Playing in an icy downpour, the Faroes won 1-0 on a late penalty. But, with the farcical weather taking the competitive edge off everyone, both players and fans did something almost unheard of in modern sport: they had fun.

I stood in the fog and rain, loving every minute of it. It was comforting to know that in the Faroes, the old ways of sport were still alive and well.

Read about another traveler’s firsthand experience with sport in Everyone Wants to Watch the Foreigner Fight.

Luxembourg’s Mullerthal Trail is the most underrated hike in Europe

Stretch your income with an international move