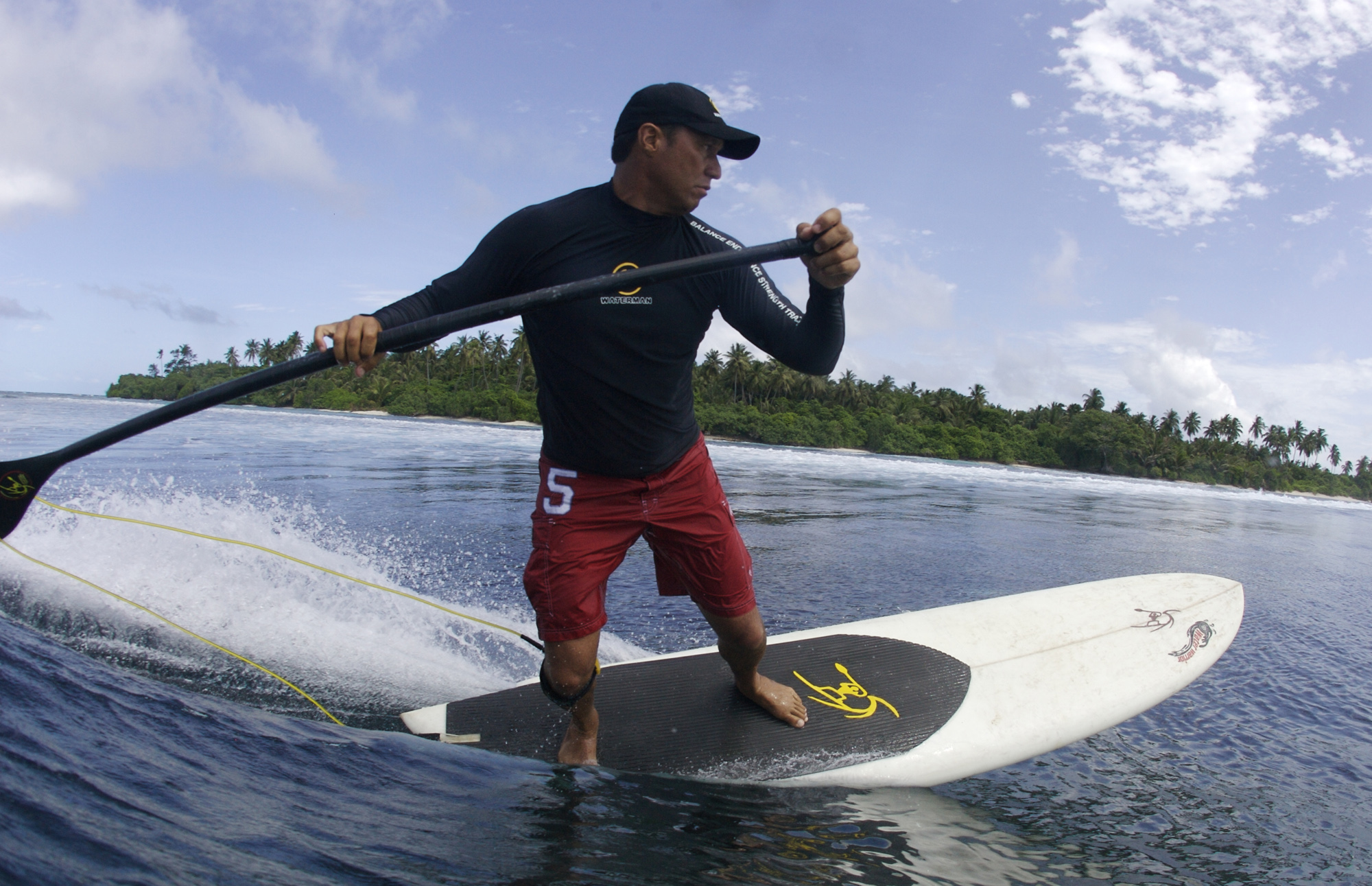 All photos by Allen Mozo

While the fast-growing sport of stand up paddling gives people new ways to explore oceans, rivers, and everything in between, it’s actually a Hawaiian tradition reaching far into the past.

“When we were kids growing up, we didn’t care what we rode, we just wanted to be in the water,” says Todd Bradley, who grew up playing on the shores of 1960s Waikiki.

As a small kid, he mimicked the beach boys who rode around on their big planks using canoe paddles, not realizing that one day he’d have a hand in the modern revival of what has become a wildly popular sport.

As a grom-grown-up, Bradley still has that innate desire to play in the sea. He and other pioneering watermen respond to an instinctive urge to push their boundaries, and they constantly invent tools to go bigger, faster, deeper, longer and stronger. In 2007, Bradley teamed up with Brian Keaulana, Dave Parmenter and Mike Fox to produce stand-up boards and paddles, forming a company called C4 Waterman, one of the sport’s modern pioneers.

When the first stand-up boards hit the water, there were lots of photos of guys cruising around in flat bays, like a Sunday walk in the park. Today, stand-up paddlers are racing across the Moloka‘i Channel, stand-up paddling into outer reefs once reserved for tow-in only, going everywhere from crocodile-inhabited rivers in Australia to massive barrels in Tahiti. 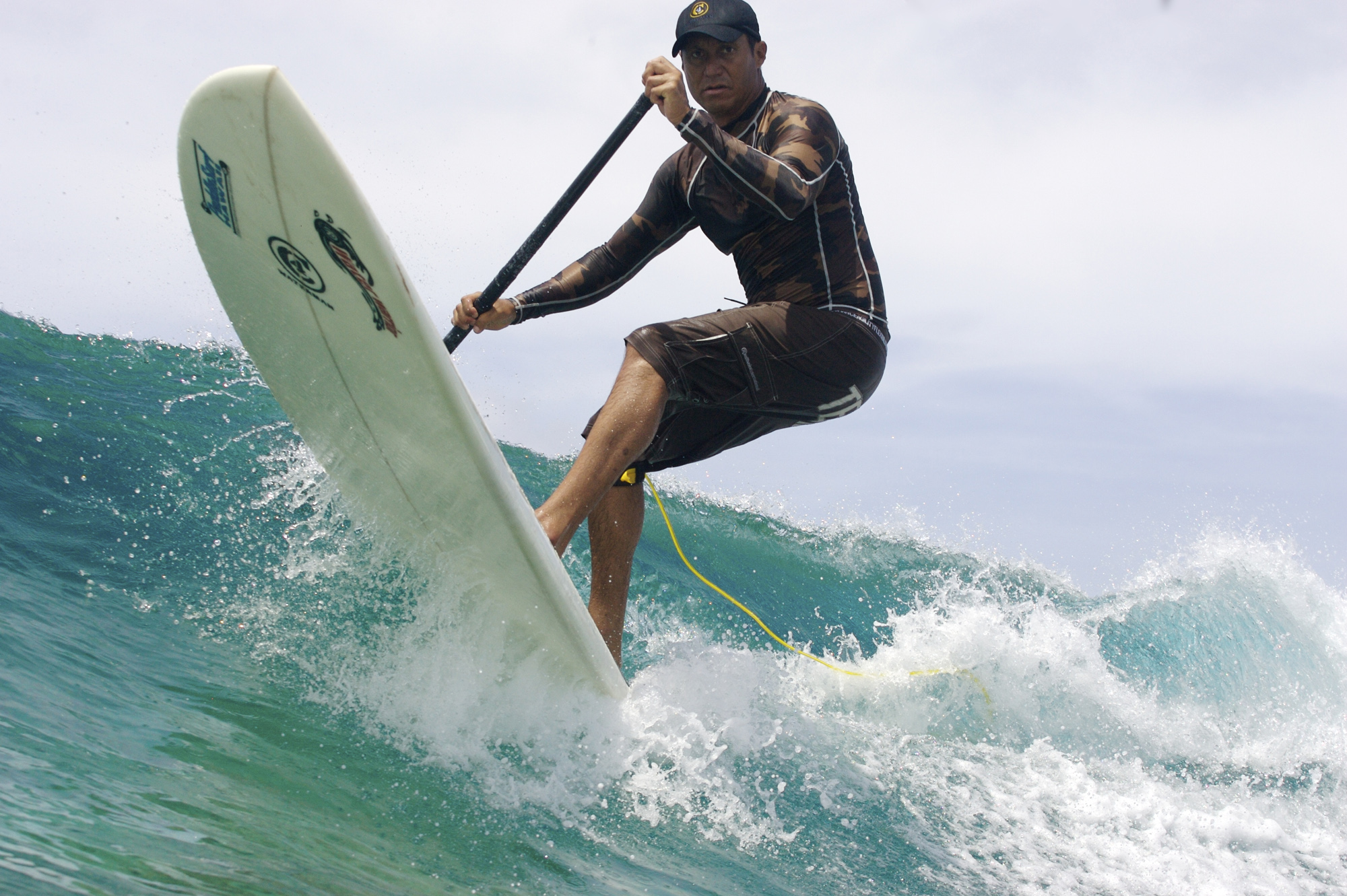 “The world gets so locked into ‘I’m going to practice my surfing and I’m going to surf great,’ when surfing is the easiest thing to do.

Surviving is the hardest,” says former Makaha lifeguard and stuntman Brian Keaulana. After all, it’s not only your physical equipment, but your mental equipment, knowledge and attitude, that matters.

“I was brought up in a waterman’s world where my father is like the ultimate waterman, really. He’ll go out and he’ll dive and he’ll feed [everyone on] the beach. He’ll give without expecting to receive anything back—no payment, no reward, just the fullness of someone’s belly, the smile on a kid’s face,” Keaulana says, talking about his dad, Makaha’s legendary Buffalo Keaulana.

“And then he’ll paddle out and surf one to two-feet waves and he’ll bodysurf a six-foot wave, and that’s the thing: No one piece of equipment makes us who we are.”

When Bradley gave Keaulana a hat with the company logo on it, Keaulana said he took a marker and blacked out “Waterman.”

“Todd said, ‘What did you do that for?’” Brian remembers. “I told him, ‘Well, because to me, it’s [about] the hidden waterman in each person.’” In other words, a true waterman doesn’t wear his skills on his boardshorts. He demonstrates by example.

C4 represents the four core values of a waterman—balance, endurance, strength, and tradition. “You don’t have to paint it or write it,” Keaulana explains. “The thing about the ocean—you can have the most certifications in the world, but the ocean can’t read that piece of paper. It doesn’t understand that plastic card. The ocean demands the utmost respect from every individual.”

Currently, C-4 has models from 11′ 6″ down to 9′ to fit people of all different sizes, skill levels, and surf styles, and they’re constantly evolving new designs. 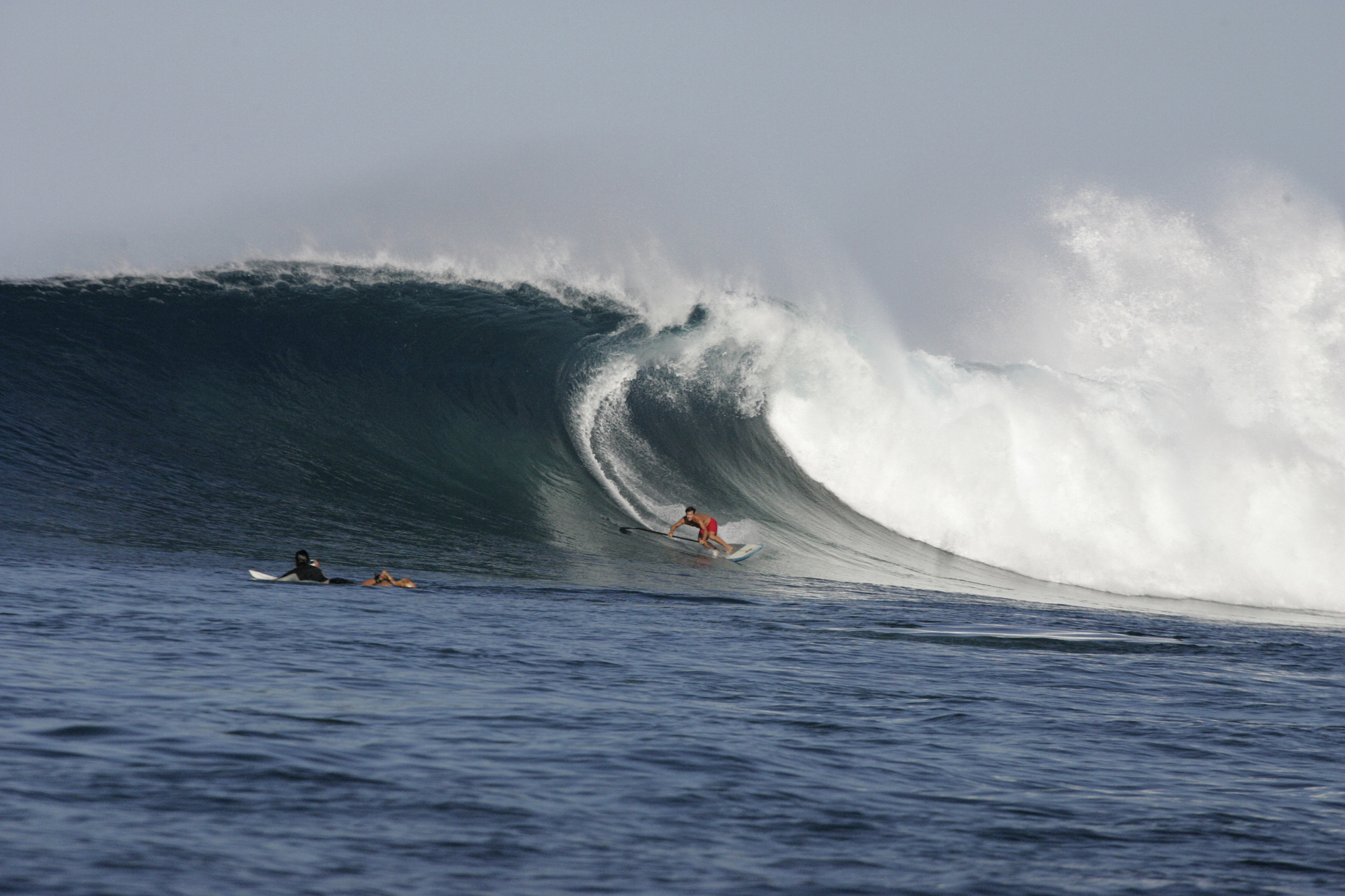 Board and Paddle Design

“Dave is so key in designing these boards. He’s an ex-pro shortboarder, shaper of shortboards, and yet he’s lived in Makaha so many years, and he’s shaped so many big boards for big boys, that he knows how to take a big board and give it performance,” says Bradley.

The design of the paddle is just as important as that of the board, and Bradley, an elite paddler and steersman who has been designing paddles for 30 years, is now applying that knowledge to create functional stand-up paddles.

According to Bradley, the first stand-up paddles were basically outrigger paddles with long shafts that weren’t efficient in moving water. “They would wander side to side. They would bang the rails,” he remembers.

“Efficiency is more important than anything when you’re trying to go through the water, whether it’s board design or paddle design. A good example is surfboard fins. No surfer would put any old fin on his board,” Todd continues. “To me it made no sense why someone would grab any old paddle and stick it in the water, because it’s a totally different game.

The paddle doesn’t just help get surfers into the waves. It’s indispensable for driving the big board and pulling off maneuvers. “On a board that size, you could never get it on a rail and hold it long enough to crank a super-hard turn, but with the paddle, you can,” Bradley says. 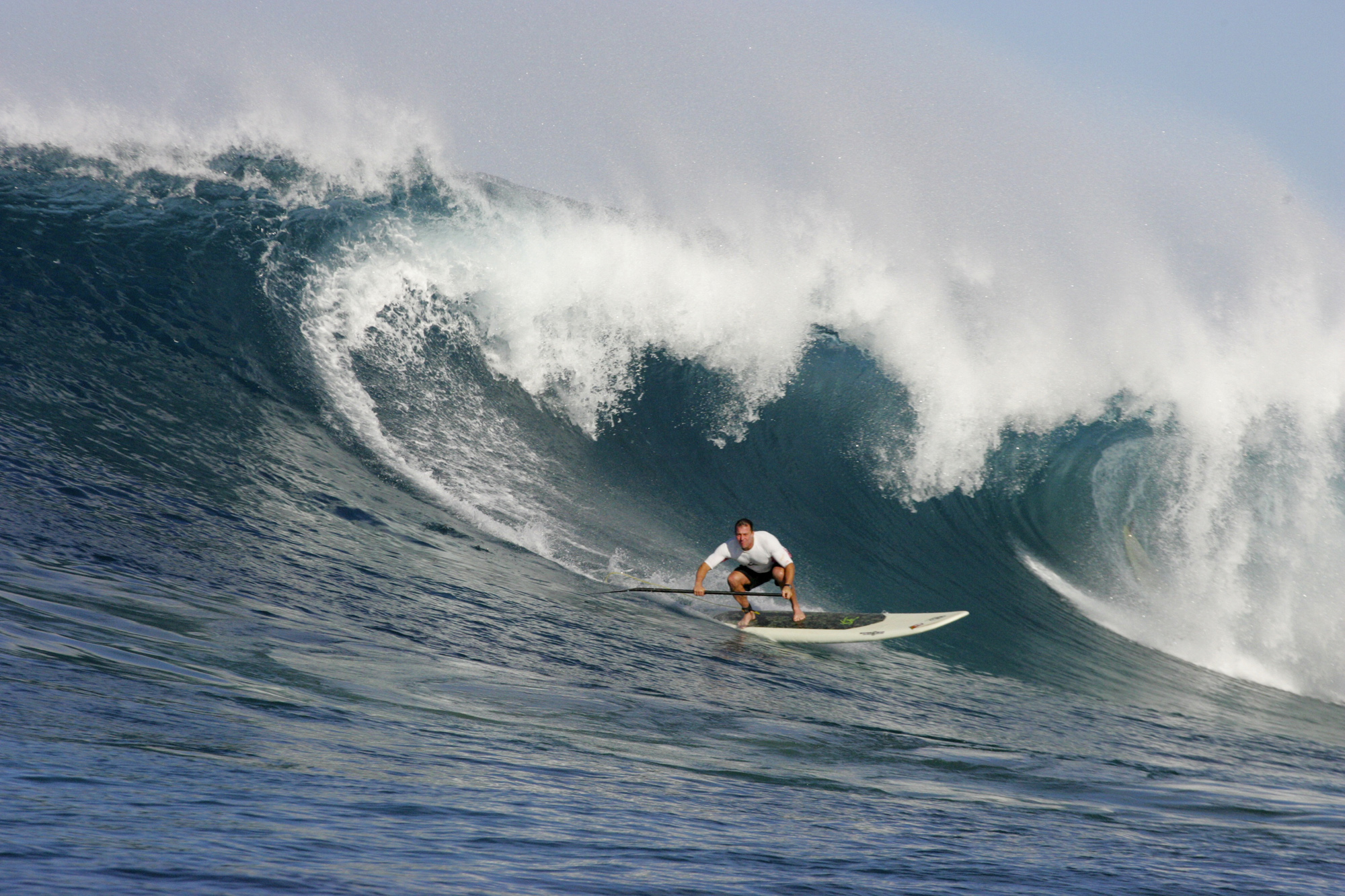 Putting the equipment to extreme tests, Keaulana validates the designs, claiming that he’s getting in quicker, tighter and deeper on his stand-up board than on his paddling gun. Indeed, standing up offers surfers advantages over traditional surfers—you can see the sets coming, you can sit further out, and you can take off earlier—but with those opportunities comes the potential to abuse them.

Keaulana and Bradley emphasize that surfers need to be responsible and respectful in the water. “The guys who have been involved in this sport from the beginning—people like Laird [Hamilton] and me and Dave Kalama and Todd and Titus [Kinimaka] and the few individuals who kind of started it off—we try and educate people that no matter what kind of equipment you’re on, have respect.

It’s been a few years since the Tahitians presented Keaulana with his first stand-up paddle, modeled after a blade that Tahitian surfer Poto copied from Laird Hamilton, who had begun beta-testing long paddles on his tandem board. Keaulana started paddling the lagoons in Tahiti and realized what a tremendous workout it is.

“For all the different things I’m involved in, because I’m limited in my time whether it’s work or family or whatever, this [gives me] the opportunity to jump in the water and work at the level I want and just pound,” says the tireless waterman, who says he tries to put in at least half an hour a day. “I can expend all my energy and feel like Isurfed all day.” 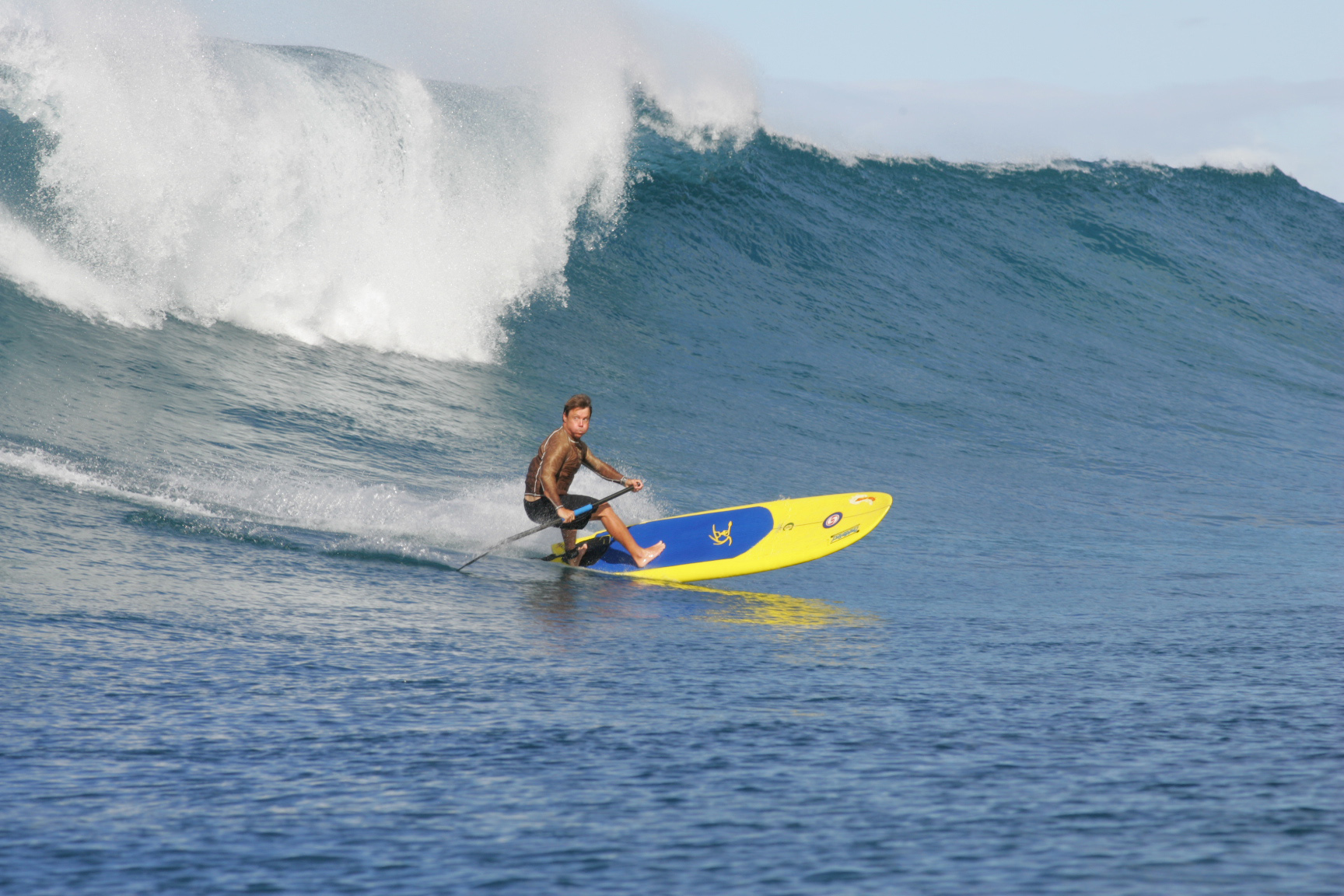 The exercise factor gives stand-up paddling mass appeal as a fun and rigorous training tool, especially for people who live far from the ocean but can still take it into lakes and rivers. Beyond the workout, though, stand-up paddling provides access to the wonder of the ocean to which watermen will eternally be drawn.

Now, each year he goes to Tahiti, Keaulana brings his stand-up equipment. He paddles along the barrier reef and rides the little waves created when the water folds over the shelf. “I see black-tip shark and ulua and the color of the coral, the sun penetrating—it’s amazing and enjoyable,” he describes. And then with the same equipment, he’ll turnaround and drop into heaving Teahupo‘o.

“Stand-up paddling, it’s a tradition for us. All we’re doing is practicing what our culture has already given us, because it is people we looked up to like Duke Kahanamoku who did that in the past. It’s not one new sport, really. It’s nothing we reinvented,” Keaulana says. “We practice the same lifestyle as our forefathers. We just get better equipment nowadays.”