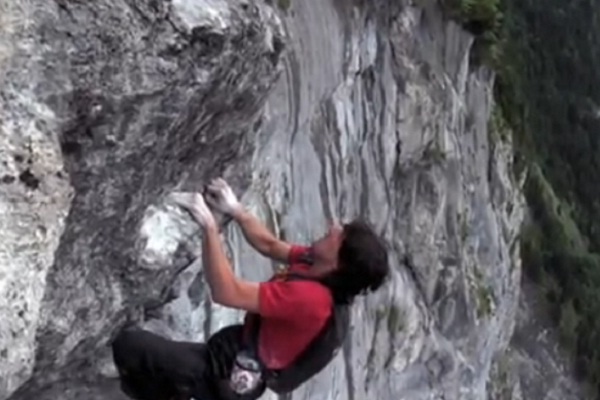 Five BASE jumps that took it to the next level.

When leaping out of a plane with only a thin fabric canopy standing between you and oblivion just isn’t doing it for you anymore, parachuting from closer to the ground is a logical next step. Thus was born BASE jumping, one of the most hazardous and exciting sports on earth.

As the sport’s 30th birthday has come and gone, some athletes have begun to use BASE jumping to push the limits of other extreme sports too. Below, we’ve collected some of the most spectacular hybrid jumps ever caught on video. Interestingly enough, almost all of these jumps were sponsored by Red Bull, who have put together a real monopoly in crazy stunts.

While he was a successful racer and ski designer, Shane McConkey is most famous for his epic fusion of BASE jumping and skiing. McConkey made a total of over 700 jumps, launching himself off of sheer mountain faces in the Alps and Rockies.

Unfortunately, McConkey would eventually become one of the sport’s casualties. He died in March 2009 when he failed to deploy his parachute during a jump in the Dolomite mountains.

I could fill a post–several, probably–with videos of the crazy jumps Felix Baumgartner has made. The Austrian skydiver has crossed the English channel using a carbon-fiber wing and BASE jumped off of the Cristo Redentor statue in Rio de Janeiro, and is currently training to attempt to set a new record with the highest-altitude jump ever performed. Among his better outings was this jump into Marmet Cave, a massive sinkhole in Croatia.

3. Climbing With No Rope

Free-soloing, or ropeless climbing, is probably the only sport that gets marginally safer with the addition of BASE jumping. Yosemite climbing legend Dean Potter started combining the two sports a few years ago, carrying a lightweight chute instead of a rope to protect him against a fall.

After making a ropeless ascent of the Eiger’s north face last year, Potter set a new record for longest BASE jump ever with a nearly three-minute wingsuit flight from the mountain’s top.

4. Skateboarding Into the Grand Canyon

With a decade’s worth of X Games gold medals under his belt and a seven-story mega-ramp in his backyard, skater Bob Burnquist always seems to have room for a scary new challenge.

In 2006, he pulled off his biggest trick yet, a grind off of a specially-built rail right over the edge of the Grand Canyon. After nearly bungling the jump the first time, Burnquist and his team adjusted the ramp and pulled the trick off perfectly.

5. Jumping Off a Moving Truck

Not a fusion per se, but still pretty cool. A BASE jumper climbs onto a moving truck, then leaps from it as it crosses Turkey’s highest bridge.