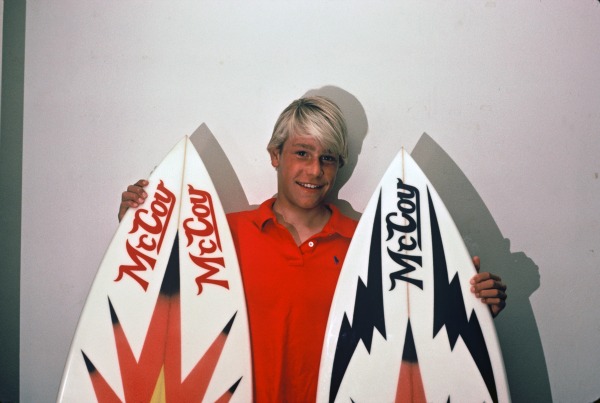 1. THERE WAS A TIME when skateboards were made of flexible fiberglass and the ball bearings inside the wheels were not encased, but rather free-flowing and anxious to spill all over the garage. These were days of Evel Knievel, H.R. Pufnstuf, Speed Racer, and Farrah Fawcett.

I had yet to step foot on a surfboard. But I did order a Morey Boogie from Surfing magazine’s Kanoa Surf mail order catalogue, along with a pair of powder blue Op cord shorts. The early boogie boards were very D.I.Y., a shaped block of foam and two skins that you glued on yourself. The boogie kept my brothers and me content for a couple years, until that fateful trip to Hawaii.

2. Waikiki Beach, summer of ’77. It’s a family vacation of “The Brady Bunch” sort. We stay at the Reef Towers, with white-water views of the very spot where Duke rode his legendary mile-long wave, where Rabbit and Kimo and Scooter Boy pushed bikini-clad haole girls from California into their first waves, where Jack London would write beautifully about surfing and thus kick off a movement.

I rent a banana yellow Morey Doyle from a stout beach boy with beer breath. At first it’s like trying to drive a semi-trailer truck through rush hour traffic. But once I get the hang of it I’m hooked. The vibrant greens and blues of the reef, the swishing turquoise, the wash of spray shooting off the rails, the sea breeze blowing back my hair and making me feel ten feet tall…

It nearly cut my arm off: I pearl on a late take off at Will Rogers State Beach in Santa Monica on a waist-high summer day, the dangerously elastic “Power Cord” twangs the board back at me. The hatchet-like Rainbow fin tears through my Sea Suit beaver tail, and puts a deep gash in my armpit. I ended up with thirty-odd stitches. My parents were not stoked. 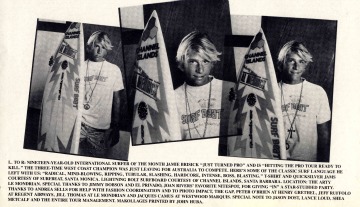 4. In 1980 a band of Hawaiians showed up at Third Point Malibu for the Sunkist Pro and proceeded to change forever the way my friends and I thought about waves. There was Buttons and Mark Liddell, both on Local Motion single fins, spinning 360s, whipping tight-arc cutbacks then switching stance on the rebound.

There was Larry Bertlemann, a veritable rock star. It was around this time that he would appear in Surfer alongside a Rolls Royce, chauffer, and his trademark Coca-Cola swirled twin fin. The buzz in the magazine was that he was earning $80,000 a year as a pro surfer, which was unheard of back then.

There was the rest of the Town and Country team: Dane Kealoha, Vince Klyn, Louie Ferreira, Calvin Maeda, and the super-friendly Randall Kim, who would sell me his 5’9” twin fin (sprayed orange and mustard yellow and covered in CHP stickers) and become my pen pal for several years.

5. I got second place in my first contest, and subsequently got offered to ride for McCoy surfboards. These were days of Cheyne Horan and Lazor Zap single fins. Cheyne become my hero. Soon after I got sponsored by Rip Curl and Gotcha, making me a full-fledged “Cheyne clone.”

I read in the magazines that he had a strange superstition about brushing his teeth before his heats, thus I brushed more in 1982 than I did in the ten years prior. He wore a beret; I wore a beret. He had a pink, black, and yellow explosion sprayed on his board; I did the same. By this time the thruster was changing the way we surfed and thus…

6. I got sponsored by Channel Islands, thanks directly to big wave-lover Willy Morris, who introduced me to Al Merrick; and indirectly to Tom Curren, who was light years ahead of his fellow NSSA stalwarts. 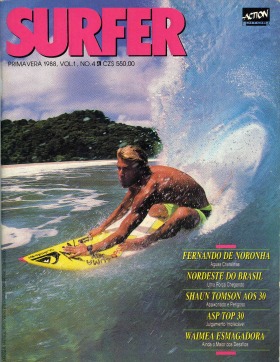 I have fond memories of watching him carve beatifically up and down, across, and in figure-eights at Santa Clara Rivermouth in Ventura. I feel privileged to have witnessed his off-stage, low-key sessions. He often surfed alone. He saw lines the rest of us couldn’t, and heard an internal music the rest of us were tone-deaf to.

My 6’3” tri-plane hull with pink, yellow, turquoise, and lime thunderbolts would get me to my first main event in Japan, where I earned $300, the first prize money check I ever received.

7. I swapped boards with a friend during an afternoon session at Third Point Malibu in ’87, loved the Rusty squash-tail thruster under my feet, and thus switched over to Rustys.

This was right around the time a sixteen-year-old Nicky Wood would rocket through the trials then go on to win the Rip Curl Bells Beach Pro, his first pro event. When Cheyne Horan would shift his diet to macrobiotic vegetarian, take on an intense yoga practice, travel through Apartheid-era South Africa with “Free Mandela” sprayed across his board, and ride eighteen-foot Waimea Bay on a 5’8”.

When Ross Clarke-Jones would party all night, then paddle out to twenty-foot Waimea Bay on a borrowed 7’10” for the Billabong Pro and forever seal his destiny. When Rabbit had a habit of taking the microphone during after-contest celebrations and singing.

I’m thinking of a particular Expression Session on a windswept, foggy, rainy stretch of Cornish coast, where Bugs sang Eddie Cochran’s “Somethin’ Else” with Mick Jagger-like gusto and turned a potentially miserable afternoon into something electric.

8. I switched to Richos in something like ’88. Richo was unique in that he was competing on the pro tour, but also one of the world’s best shapers. He made boards for Matt Archbold: deep six-channel swallowtails that were super fast, but hated onshore, choppy surfaces. Along with getting great boards, I made a fantastic friend who would introduce me to Black Rock, Headlands, Windang Island, Sandon Point, and an array of lesser-known South Coast reefbreaks that, in memory, play back like a fantasy: ledging triple-ups over shallow reef shelves with no one around but the sheep grazing on the headland.

9. In 1990 and ’91 Maurice Cole did something remarkable: He made his 6’4” x 19¼” x 2½” reverse vee thruster for at least twenty of the world’s best surfers. Didn’t matter if you were a big, heavyset guy like Luke Egan or Tom Curren, it was always the same board. Somehow the bottom curve trumped volume. It was one of the greatest designs of the decade.

I admit to being a man of great self-delusion. More than once my self-image has been terribly out of synch with reality. I have imagined winning contests at big Sunset when there are at least five hundred guys who ride Sunset far better than me. I have thought the beautiful girl was pondering me with suggestive eyes when in fact she was looking at the guy behind me.

However, this Maurice Cole and me had a special bond. I couldn’t fall off the thing. For the first time in my career I truly felt that I could win a championship event. I never did. But I remember the board as a kind stepladder, a higher perch from which to view the world.

Check out 10 Best Surf Spots for Beginners (and 5 You Should Avoid) on Matador Trips.

Tagged
Narrative Surfing Hawaii, United States
What did you think of this story?
Meh
Good
Awesome