MOST LONG-DISTANCE RUNNING events don’t include a 15-point guide to coping with hypothermia and frostbite on their websites. Then again, most long-distance running events also don’t take place in mountainous sub-Arctic terrain in the depths of the northern hemisphere’s winter.

The Yukon Arctic Ultra is an exception on both counts. It’s billed as “the world’s coldest and toughest ultra,” and I have trouble disagreeing with the label. 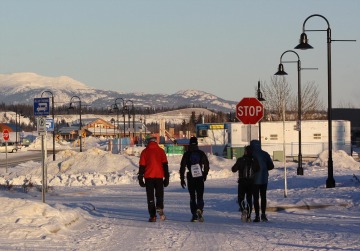 The race takes place every February here in Canada’s Yukon. The start is in downtown Whitehorse, the territorial capital, and from there the racers can choose their own adventure: a standard marathon, 100 miles, 300 miles, or 430 miles; they can race by foot, cross-country ski, or mountain bike. The 430-milers finish in Dawson City, home of the Klondike Gold Rush; the trail — which is mostly inaccessible by road — follows the historic Yukon River route to the gold fields.

This year’s race kicked off this past Sunday, on a hard, clear, sun-without-warmth winter morning. When I left my apartment and headed for the start line a few blocks away, the thermometer was showing -8 degrees Fahrenheit — pretty reasonable race conditions when you consider that we hit -40 just a couple weeks back. The race website notes that participants could encounter temperatures that plunge into the -50s on the trail, one of an array of warnings that are issued alongside the words “life threatening.” 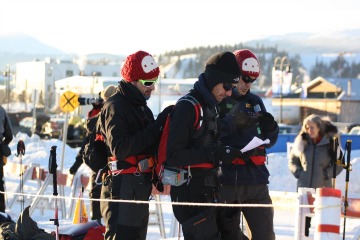 At the time of writing, the marathon had wrapped up, a few last 100-milers were straggling into their finish line at Braeburn, and the front-runners for the 300-mile and 430-mile races were on their way north again. The race continues into next week. 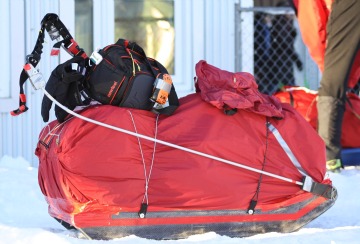 Personally I’d rather do my running in shorts and a t-shirt, on a nice flat stretch of sun-warmed asphalt, not on a snowmobile-broken trail along a frozen river, dragging a sled loaded with survival supplies behind me. But if you prefer something a little more extreme, the Yukon Arctic Ultra should be on your life list. All you need is a medical certificate, a flight to Whitehorse and a (hefty, for the longer distances) entry fee.

Let me know if you decide to come to town for next year’s Yukon Arctic Ultra. I’ll be sure to take you out and buy you a beer — or maybe a steaming mug of hot chocolate.

Intrigued by long-distance running? Check out these resources for ultrarunners.

Characters of the Yukon: Meet Sandy and Joe

Characters of the Yukon: Meet Caveman Bill and Big B

A Badass Travel Guide To the Yukon

How To Hitchhike To the Yukon