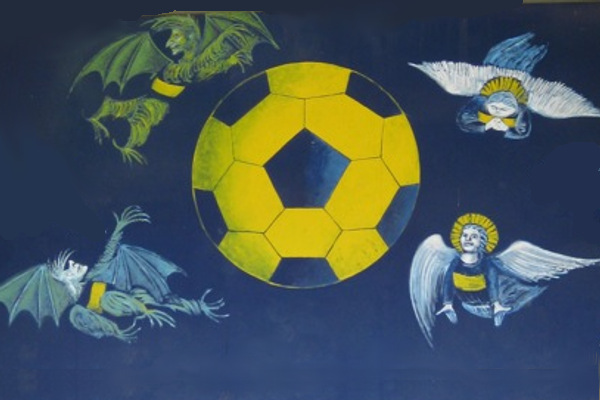 Two Chilean soccer fans are asking that the Vatican canonize their national team’s coach. Here are three coaches who we think deserve sainthood – and three who need to repent for their soccer sins.

Guus Hiddink has a knack for getting remarkable results out of unremarkable teams. It was under Hiddink that South Korea became the first Asian nation to reach a World Cup semi-final in 2002. As coach of the Australian national team, the Dutch trainer not only led the country to its second-ever World Cup, but managed to clear to the second round of the tournament.

Hiddink is currently trying to work his third managerial miracle in a row, this time by taking Russia’s national team to South Africa 2010.

Luiz Felipe Scolari’s temper does occasionally get the best of him. He frequently loses his composure on the field, on one infamous occasion even throwing a punch at a Serbian player.

Still, Scolari’s defiant side has done him some good. As Portugal’s head coach, he reshaped the team by demanding more freedom from Portugal’s meddling football association, eventually taking fourth place in the 2006 World Cup.

His performance in the tournament was so impressive that England later looked into hiring him as their new head coach, despite that fact that it had been Scolari’s team that had knocked them out of the World Cup just months before.

When Brazil hired him as head coach in 2006, Dunga had never managed a professional soccer team. Three years later, he’s injected new life into the selection, having won two FIFA trophies and easily qualified for South Africa. Call it beginner’s luck if you like, but Brazil under Dunga is playing more consistently than it has in a long time.

For the cardinal sin of playing much better than he coaches

He may have done partial penance by qualifying for the World Cup, but Argentina’s national coach Diego Maradona still has a lot to repent for.

Under Maradona, the selection has been a tactical mess, losing to Paraguay and barely squeezing past Peru to stay alive in World Cup qualifying. Diego will need to rethink his strategy and perhaps shuffle around his team if he wants to win in South Africa next year.

For the cardinal sin of being a hothead

Like St. Scolari, Argentine coach Ricardo La Volpe is known for his temper. Unlike Scolari, La Volpe has a bad habit of letting it interfere with his strategical decisions.

Perhaps his most notable flub was in 2006, when, as Mexico’s manager, he kept star forward Cuauhtémoc Blanco from his World Cup squad following a personal disagreement. Mexico ended up exiting in the second round, and La Volpe followed soon after.

For the cardinal sin of confusing “traditional” with “good”

After Sven Goran-Eriksson’s disappointing performance at the 2006 World Cup, the English Football Association decided it had had enough of foreigners coaching its team, and promoted former assistant Steve McClaren to the top job.

McClaren immediately cut David Beckham from the squad, and the selection returned to a time-honored tradition of English football – losing. He was fired after just 18 games, the shortest tenure in English managerial history.

Who are soccer’s real saints and sinners? Sound off in the comments section.