WHO KNOWS. Maybe if I had one of these back in 1990 counting how many backside 360s off a launch ramp I was landing I’d still be skating today. Instead, I quit the sport and now relegate myself to longingly watching the youngsters at the skateparks, trying to build up the courage to once again step on a skateboard at the age of 37.

It’s mind-boggling how far extreme sports have come in such a relatively small amount of time; the tricks — and the speed at which they’re done — would have been unimaginable just years ago. I’m sure the internet has much to do with the advance. Now you can find out what other surfers and skateboarders are doing just by jumping on YouTube. No need to wait for the VHS (or Betamax) to come to your local skate or surf shop. 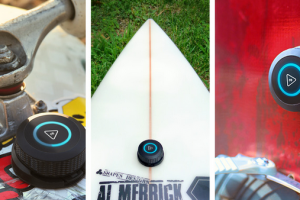 Athletes are pushing each other to go higher, faster, longer, harder. What effect would a device like TRACE — which utilizes technology like Bluetooth and GPS — have on the scene? To instantaneously update your friends and peers as to what you’re landing, how fast you’re going, and how you’re perfecting your tricks. For the driven this will create more motivation, not just for going bigger, but for innovating their sports.

The Kickstarter campaign has a goal to raise $150,000. They’re almost there; at the time of writing they had raised over $118,000 with 10 days to go on the campaign, closing on September 14. To learn more about the project and to pledge a contribution, visit the campaign here.