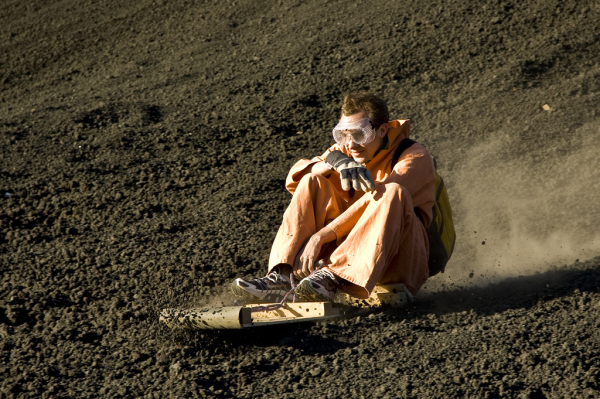 One of the world’s newest adventure sports has first-time participants sliding down the side of an active volcano. But what are the risks?

MOST VOLCANOES WOULD have to erupt to get as much attention as Cerro Negro gets. For the past four years, travelers have come this peak in western Nicaragua to try their hands at volcano boarding, a new adventure sport that transplants duneboarding onto the slope of an active volcano.

Volcano boarding started with Darryn Webb, an Australian tour guide and duneboarder based in the nearby city of León. In 2005, Webb began running volcano boarding tours from his Bigfoot Hostel. All the while, Webb continued to refine his gear, finally settling on a sled-style board made of metal and Formica-reinforced plywood.

Since then, volcano boarding has exploded in popularity. Bigfoot now takes groups to Cerro Negro four days a week, with tours often selling out. After the 45-minute climb to the top of Cerro Negro, guests don goggles and bright orange jumpsuits and get a quick lesson in technique before blazing down the slope at speeds of up to 68 km/hr (42 miles/hr).

Other tour operators offer their own spins on the activity. For $33, León’s Va Pues Tours gives guests the option of carving down Cerro Negro on one of their stand-up boards, though they do suggest that riders have previous snowboarding experience.

While spills are common, both Bigfoot and Va Pues said that no one had ever sustained a major injury on one of their tours.

“The only possible problem is a little gravel rash on the bottom of arms and legs,” wrote Bigfoot manager Gemma Cope via email. “Nothing too serious.”

Then there’s the danger of eruption. Cerro Negro is Central America’s youngest volcano, and is still active, erupting as recently as 1999.

While the possibility of eruption is all part of the thrill for many visitors, tour operators say that the threat to participants in minimal. According to Cope, Bigfoot works closely with the national park’s staff to stay updated on any tremors in the area.

“We are also on the volcano every day, so we would see the changes prior to an eruption,” wrote Cope. “The risk of an eruption is not an immediate issue for us.”

Have you tried volcano boarding? Want to try it? Tell us about it in the comments section below!

Tagged
Extreme Sports Nicaragua
What did you think of this story?
Meh
Good
Awesome

May 16, 2022 Neil Armstrong
✖
travelstoke
Download the mobile app
stoked by