THERE IS WIFI ON EVEREST. This disillusioning fact gives me pause as I begin to form my interview questions from the tangled wad of boyish wonderment that accompanies the thought of climbing Everest.

It is strange to imagine Kenton, bundled and hunkered at Camp 4 (approx. 26,000 feet), plinking away at his keyboard, addressing my curiosities.

It is May 24th and Mr. Cool is on the eve of his 10th Everest summit. This particular climb is also a gadget-fueled social media event orchestrated by Samsung and a fulfillment of the 1924 pledge made to deliver an Olympic gold medal to the top of the world on behalf of British mountaineer Lt. Col. Strutt.

I send Kenton my questions via his PR handler, only half expecting that an interview can be conducted from this oxygen-deprived soaring wasteland that occupies both earth and space.

Joshywashington: What is it like up there? When you unzip your tent, what confronts you?

Kenton Cool: Leaving the South Col1 is like nothing else. Normally one would unzip the tent and be confronted by darkness. The wind is always blowing across the col, it’s cold…really cold. Moving from the warm confines of the tent only makes this worse. 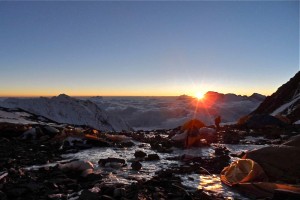 The view from Camp 4

Everything starts to freeze.

All the while you can hear the hiss of O2 cylinders being screwed on to the regulators and mask.

It seems super chaotic, and to a degree it is. For people like Keith [Kenton’s cameraman] who have never been here before, it must be super hard — all the things going on, the chaos, the shouting in the dark.

You have to compose yourself to climb up into the darkness with almost 1000m of vertical ground to cover before you reach the summit. Anything exposed is going to freeze quickly, so balaclavas are pulled over the exposed flesh of the face.

We check that we have all the equipment: cameras, tripod, spare batteries, BGAN2, a Samsung 400b solid state laptop and Galaxy Notes — all intermingled with head torches, spare gloves, and flasks.

It’s dark, so seeing where to go is difficult, but above you is a line of head torches from other climbers who have already left.

JW: How does this climb differ from the previous 9?

KC: It was a tough year on Everest. The early weather window was missed by everyone, but for us it was because poor Keith was very ill at the start of the trip. I am really amazed he bounced back to be so strong…great effort by the lad. Then there was all the issues with the icefall — a big avalanche which resulted in some high-profile teams going home.

Climbing 8000m peaks is about waiting for the right moment. A window opened up, but only a short one, and many people rushed to use it resulting in crowds, and I can only suspect a summit day that left many unfulfilled.

Finally, our time came. The climb from Camp 3 to the South Col went like a dream. With no one around filming it was easy, and the results stunning.

Our summit day was nowhere near as busy as the 19th; the wait had been prefect.

Let’s not forget what was around my neck…a 1924 Olympic Gold medal. The hard times (of which there are always many) were overcome by the knowledge that there was something much larger than my 10th ascent about this climb — I had to dig deep to succeed for everything the medal stands for.

JW: Describe the actual summit — what is the physical / mental environment like?

KC: Physically it’s quite small. The very, very top is covered with prayer flags left by the Sherpas. There is room only for one or two people to sit on the top. If there are more than that, people will gather on the south side where the slope is less steep.

Mentally…that’s a hard one. For me the summit means so much — yet it means nothing at the same time. It’s a junction for me, a turning point in the expedition. It represents success, but it’s also the beginning of the end, and in the case of this expedition, it’s the end of a wonderful two years of adventure.

JW: Who do you rely on most on the mountain? Who are the unsung heroes without which this could not happen? 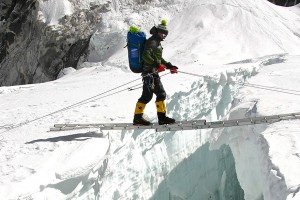 The boys that I have worked with over the last 10 years are like my family…people who I would lay my life on the line for, and I know they would do the same for me. It’s a two-way trust that makes climbing the mountain not only safer but more enjoyable.

The Sherpas aren’t workers on the mountain, they are friends that I am privileged to climb alongside.

JW: Does it ever get humdrum? Has any of the thrill diminished?

KC: The thrill of summit day will never diminish. I think Everest is so special — it’s not just the mountain but the whole aura around it from the trek to base camp, staying among friends at base camp, to the climb itself.

And those final 10m to the top — to the top of the world — that generates excitement every time!

To learn more about ‘The Pledge’ and the life and climbs of Kenton Cool, visit his website and watch his videos.

1 A col is a mountain pass. When climbers attempt to Everest from the southeast ridge in Nepal, their final camp (Camp IV) is on the South Col. Typically ravaged by high winds, it’s also free of significant snow accumulation.

2 BGAN or Broadband Global Area Network is a global satellite internet network with telephony that uses portable terminals that connect a laptop computer to broadband internet in remote locations. A BGAN terminal is about the size of a laptop.

3 Sherpas are the inhabitants of the Khumbu Valley, the national park surrounding Everest. They have lived in high-altitude locations for generations and have developed genetic allowances for low-oxygen environments. Since the first summit of Everest by Edmund Hillary and Tenzing Norgay in May of 1953, Sherpas have played a vital role in summit expeditions.

Tagged
Climbing Nepal
What did you think of this story?
Meh
Good
Awesome