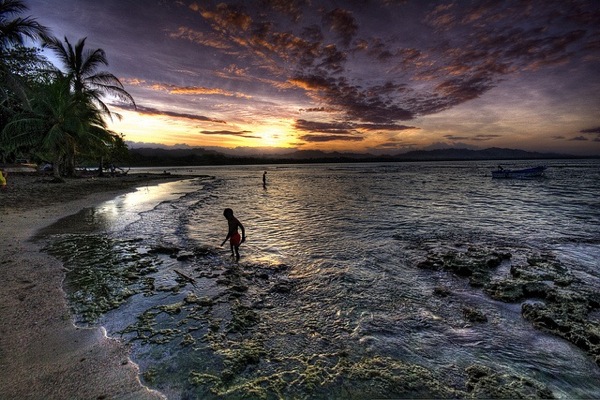 In the first entry in our Worst Case Scenarios series, Benita Hussain discusses why surfing with people who like you can save your life.

The number-one rule for any outdoor activity is to never go alone. Alone, however, can be a relative term. For some, it means paddling out when no one else is there, although some of my more soulful friends believe that they’re never alone if they’re with the ocean. For others, surfing with others means only going out with friends. My standards are a little lower: My rule is to only surf when I am around people that like me, which can sometimes be a difficult standard to meet, depending on the location.

Case in point: A long-awaited winter swell had finally come to Puerto Viejo de Limon, a town in Costa Rica where I had been living for two months. I never liked to compete for waves on the line-up at Playa Cocles, which was usually clogged by 10 AM. At that latitude, the sun was unforgiving by that time anyway.

Staying in the water past then, even with layers of zinc oxide, could lead to a burn that kept you from leaving the house during daylight for an indefinite period. I had grown accustomed to rising at 5:30 in the morning and drinking a coffee before waxing up my board and walking a mile to the beach break, which was both the most popular in Puerto Viejo and also contained most of the town’s testosterone and territorialism. 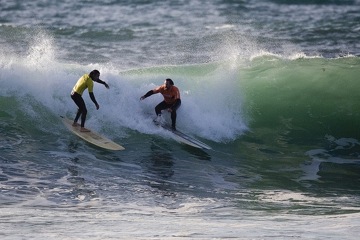 It was the first day of the swell, so no one had yet reported on the size or shape the waves had taken. I scanned the horizon as I stretched. It wasn’t going to be a pretty day. The sky was cloudy from the storm, and the waves were dark from the water the system was bringing in. The waves were twisty, breaking in sets at different parts of the beach than I was used to–the sandbar had changed during the night.

I could see the line-up, which included Ana, a Catalan ex-pat who owned a local café, with a fellow ex-pat Sarita. Julieta, an Argentine waitress from whom I had bought my board, also sat waiting for a set, along with Hector and two female students of his on plastic funboards. I didn’t think it was a day for beginners, but knew he would look out for them. I was relieved to have these women out with me, but surprised how many people were already out.

“Hola, Ana.” I paddled closer to her and Sarita, noticing how quickly they kept bobbing away from me. Playa Cocles was speckled with signs along its beach warning swimmers of rip tides and side currents. This day seemed worse than was typical. Just staying in place would be a muscle-burner. 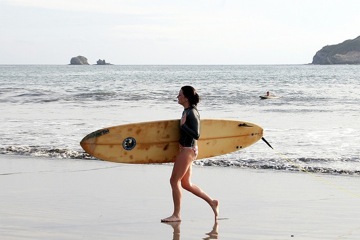 We sat and waited. Julieta was far from us but greeted us from her spot. She was a very good surfer. We watched her turn and catch some of the overhead sets. I realized these were the biggest waves I had ever been in.

I turned back to Ana. “Tal vez son demasiado grande para mi.” She told me that she’d help, but that we’d have to paddle hard.

And that’s what we did, to little success. Ana caught two waves, and then came back over to me. She was tired and had little left in her. She and Sarita wanted to go back in, and I watched them disappear in front of the crests until I saw them walking their boards along the shore. I paddled over to Julieta, who had already caught five or six waves.

My arms were burning. I was growing nervous, and I longed to be back at the beach with Ana and Sarita. I looked around and saw a wave I was in the perfect position for, and with my last bit of energy, I turned my board and dug.

“Vale! Vale!” Julieta hollered from behind me.

I felt a nudge that told me I was on the wave. I stuck my left hand into its face, turned, and rode the first overhead wave of my life. I kicked out of it, and jumped off my board in delight. Julieta whistled and yelled, “Muy bien!” César, Ana’s husband, who had taken her board and come out, nodded. “Very good!!” 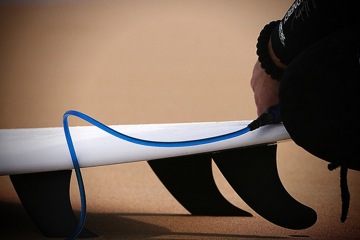 I saw a set approaching, and my newfound adrenaline urged me back towards the line-up. But between the currents and my failing muscles, I couldn’t make it over the first of the set, so I dove deep under it while trying to hold my board.

The board promptly slipped from my hands. This had happened before at Cocles, but I could usually reach back and hold the leash guard to keep the board near me.

This time, I felt my leg yanked back. Before I surfaced I groped around my ankle and found only my velcro strap and a jagged break in plastic where my leash and surfboard had detached. I flew up and watched my board surf its way to shore.

Panic set in. Neither the waves nor the currents had become any more forgiving, and I kicked to stay afloat as I watched another set approach. I spotted Julieta, who, above the roar of the waves, couldn’t hear me yelling her name. I began to swim towards her, but felt the side current again pulling me away. Another wave. The shore began to creep farther from me, as did the other women. Julieta caught another wave. I was quickly becoming a scenario that I had only heard about: Rip tides, currents, leash breaking, being alone.

I wondered whether the lifeguards-—the only ones that had been hired in Puerto Viejo due to Cocles’ reputation for drownings-—would actually do their jobs. I thought that after three or four minutes they would have spotted me. But I could see them looking at their hands while sitting near the channel, where an increasing number of men were paddling out.

That channel was now very far from me, and even if the fresh surfers were nearby, I knew that they probably wouldn’t have minded seeing me disappear or at least shaken up.

I began to kick towards Julieta, who was paddling back towards the line-up but away from me. I yelled her name one more time. She looked back at my eyes and came over. I was losing my ability to speak Spanish. “Julieta,” I coughed. “I lost my board.” She looked at me blankly. “My board is on the beach.” I grabbed my foot to expose my ankle to her.

I nodded. She got off her shortboard and pulled me on. While I paddled, she pushed, ducking under waves breaking behind us until she could touch the sand. I jumped off and grabbed her by the shoulders, kissing her on the cheeks.

“Vale.” She smiled, shrugged and paddled back out. 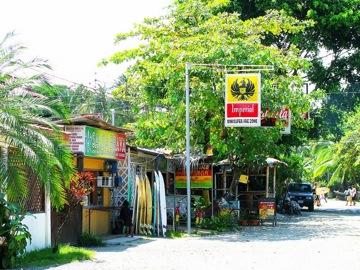 I was trudging out of the white water when I saw Ana running towards me, my board under her arm. In the distance behind her, I saw one of the lifeguards finally get up from his chair, grasping a lifesaver. He didn’t move, just watched me leave the water.

Ana handed me my board. “Are you OK?” she asked, struggling through the language barrier.

“Yes. I think I’m done for the day.” She looked at me with Julieta’s same blank look, and then I started grinning. “But did you see that wave I caught? Awesome. Ola grande.”

Ana laughed and walked me back to her towel, her hand not leaving my shoulder.

Have a story that is funny, tragic, or somewhere in between when participating in your favorite activity? Contribute your story of a Worst Case Scenario to mSports.

Tagged
Surfing Costa Rica
What did you think of this story?
Meh
Good
Awesome