CHAMPAGNE AND BLUEBIRDS — that’s the kind of snow and skies you’ll get in Banff and Lake Louise in winter. With three world-class resorts — Norquay, Sunshine Village, and Lake Louise — covering nearly 8,000 skiable acres, and an average 30 feet of snow falling on the mountains each year, this patch of the Canadian Rockies is a playground for skiers and snowboarders from all over the planet.

Grab your Tri-Area Lift Ticket and open your days to unforgettable memories both on the slopes and off — seeing the Milky Way and Northern Lights over Lake Minnewanka and partying to live bands at the Rose & Crown; snowshoeing along the shores of Lake Louise, watching for elk, and having a candlelit dinner in an actual chateau as the stars come out. Here’s an idea of what it all might look like. 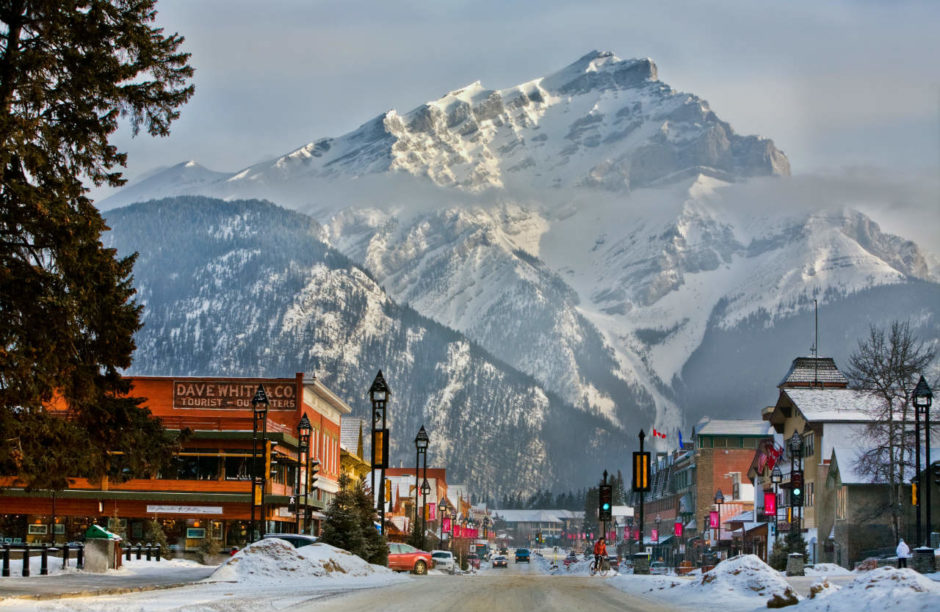 I’m pretty sure it’s impossible to take a picture of Banff town without Cascade Mountain looming in the background. That’s more than okay. Along with Rundle, it’s probably the best-looking peak in the area. This photo was taken on the town’s main street—Banff Ave—which, about a century ago, was Banff (in its entirety).
Photo: Paul Zizka Photography for Banff Lake Louise Tourism 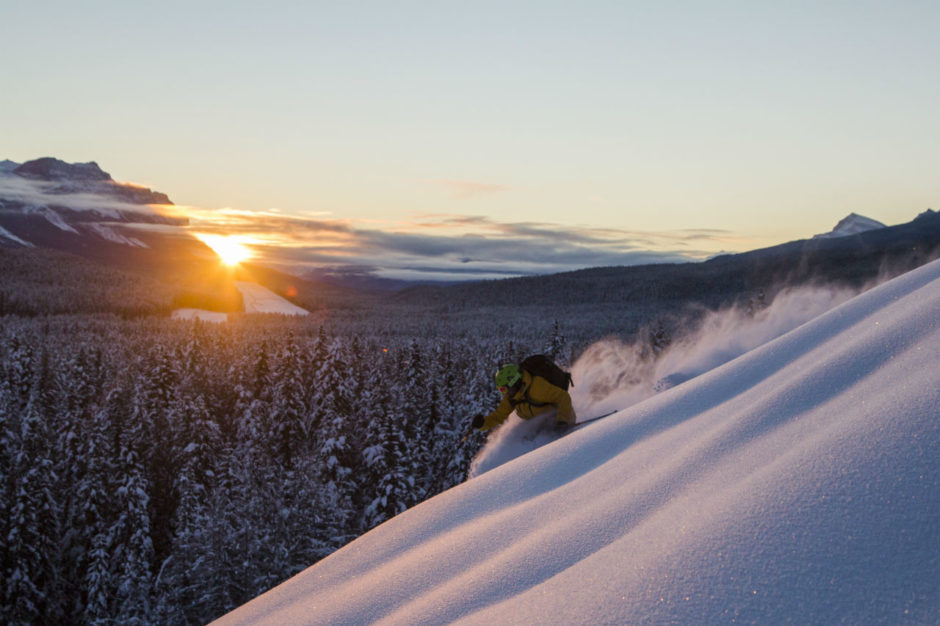 4,200 acres of varied terrain across four mountain faces, awesome runs and back bowl areas for expert skiers and riders, incredible views out to some of the tallest mountains in the region—there’s a reason why Lake Louise Ski Resort has won practically every award and accolade from SKI Magazine, from #1 for scenery to one of the 25 best ski resorts in North America.
Photo: Dan Evans 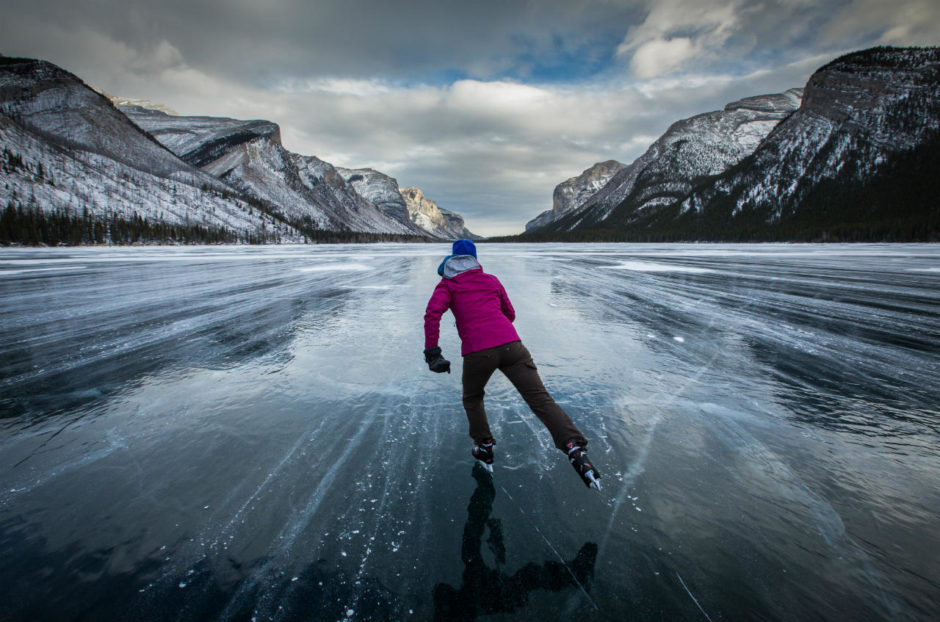 Voted one of the 10 most beautiful ice skating rinks in the world by CNN Travel, skating on Lake Louise feels like being in a fairytale. Lake Minnewanka, close to Banff, can also be skated on in winter. Check with locals before you head out, though; you’ll want the ice to be so thick it’s a clear, vivid blue. Another sweet rink to check out over winter is the Waldhaus Rink in Spray Meadow—it’s just behind the Fairmont Banff Springs Hotel.
Photo: Paul Zizka Photography for Banff and Lake Louise Tourism 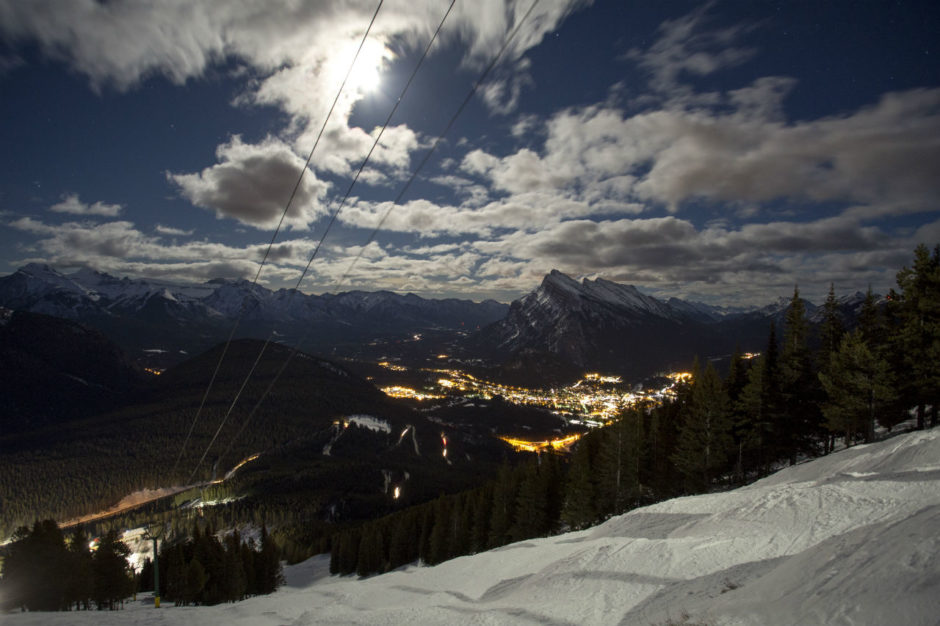 Fridays in December, and Fridays and Saturdays in January and February, you can go night skiing at Mt. Norquay for free with your Tri-Area Lift Ticket. This ticket actually covers you for all the skiing you can handle across the three resorts. It also gets you free ski shuttles each day, free tubing on Norquay, and free admission to the Banff Hot Springs when you purchase a 3+ multi-day lift-ticket—definitely the best way to end a day on the slopes.
Photo: Dan Evans 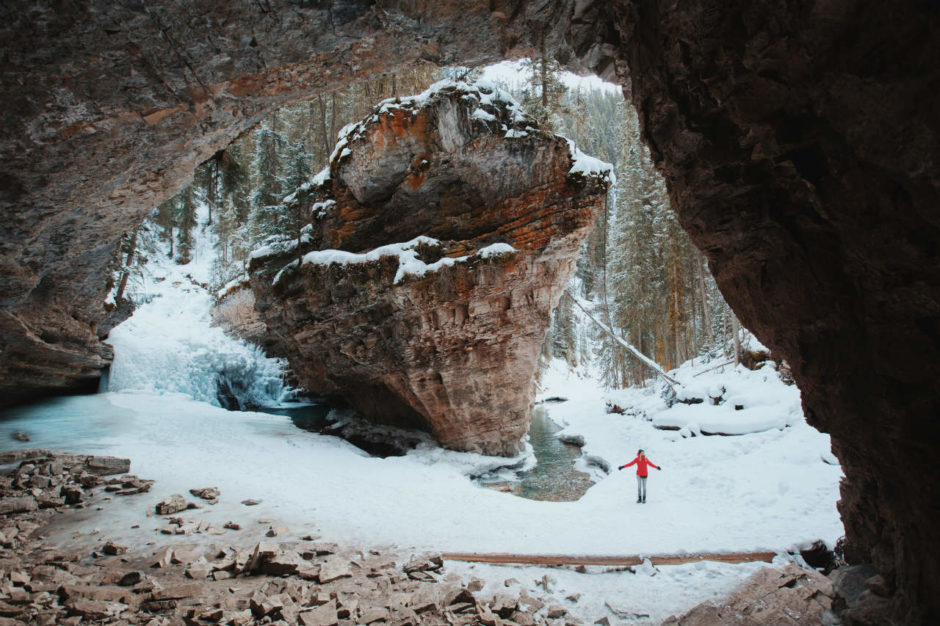 National Geographic Adventurer of the Year Will Gadd is probably one of the world’s top ice climbers, and along with a number of winter Olympians he lives next to Banff in the town of Canmore. The snow here’s just that good. Gadd became the first person to climb the frozen Niagara Falls two years ago, and in winter you may just spot him—or some other hardy ice climbers—taking on the surreal blue of Johnston Canyon’s frozen falls halfway between Banff and Lake Louise. Outfitters like Yamnuska can teach you how to climb its frozen sheets; or just join an ice-walking tour along the perimeter.
Photo: Jake Dyson 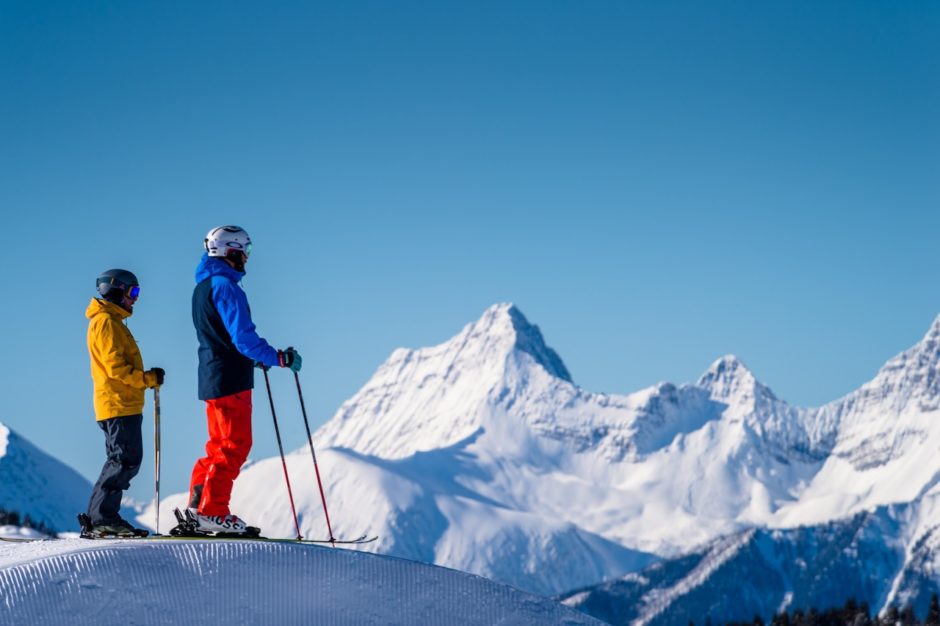 Straddling the Continental Divide between Alberta and BC, at a lofty 7,200 feet above sea level, Sunshine Village has what’s touted as “the longest non-glacial ski season in Canada.” Stay in Banff (a super easy shuttle ride along the Trans-Canada Highway from Calgary International Airport) and take the 20-minute shuttle out to Sunshine each day, or stay on the hill at Sunshine Mountain Lodge, the only ski-in ski-out lodge in Banff National Park.
Photo: Reuben Krabbe 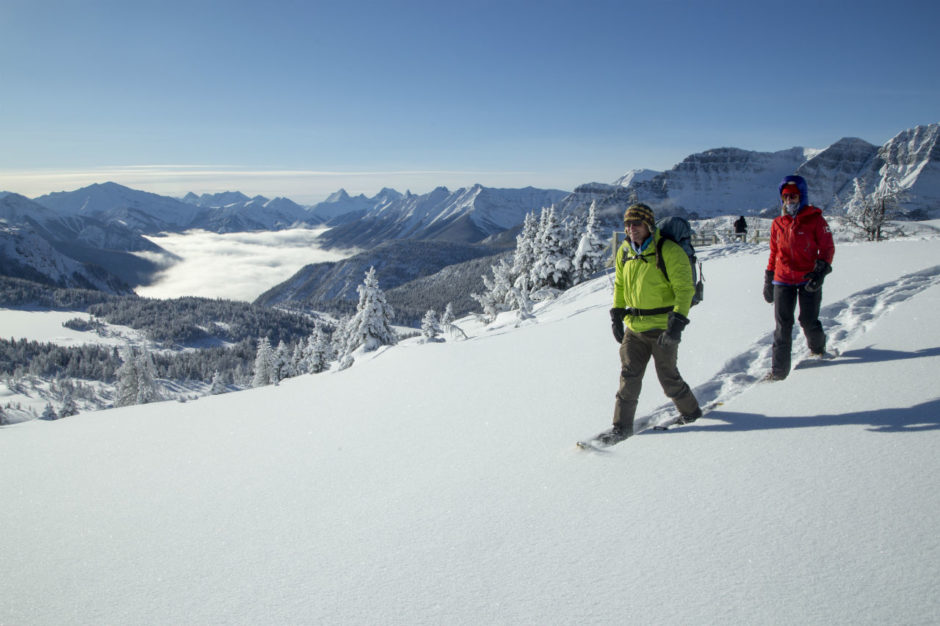 Both Lake Louise and Sunshine run brilliant snowshoe tours, and anyone can have a go—no experience required. At Sunshine you’ll be making tracks in Sunshine Meadows’ virgin snow as you head toward Rock Isle Lake. The best part? Hot chocolate and goodies are included.
Photo: Dan Evans 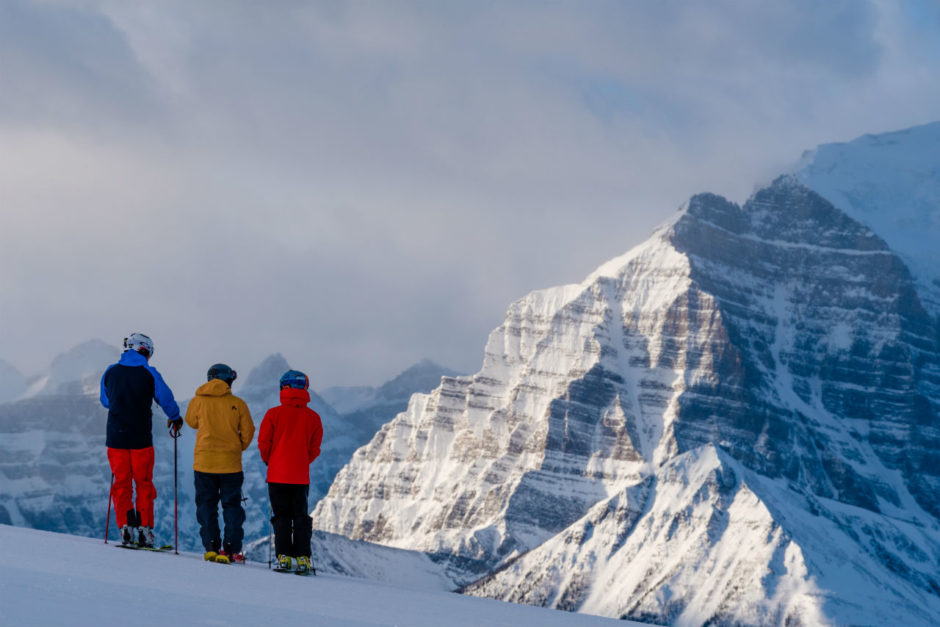 With more than 145 runs, Lake Louise is the biggest ski resort in the Canadian Rockies. And that size equates to a great mix of terrain—every lift at Lake Louise serves at least one beginners' run, which means families can ride together before splitting up to take on the difficulty of their choice. Runs on the front side are often good for beginners, and they look out over that famous lake. Hit the back for two awesome alpine bowls known for their challenging steeps and chutes.
Photo: Reuben Krabbe 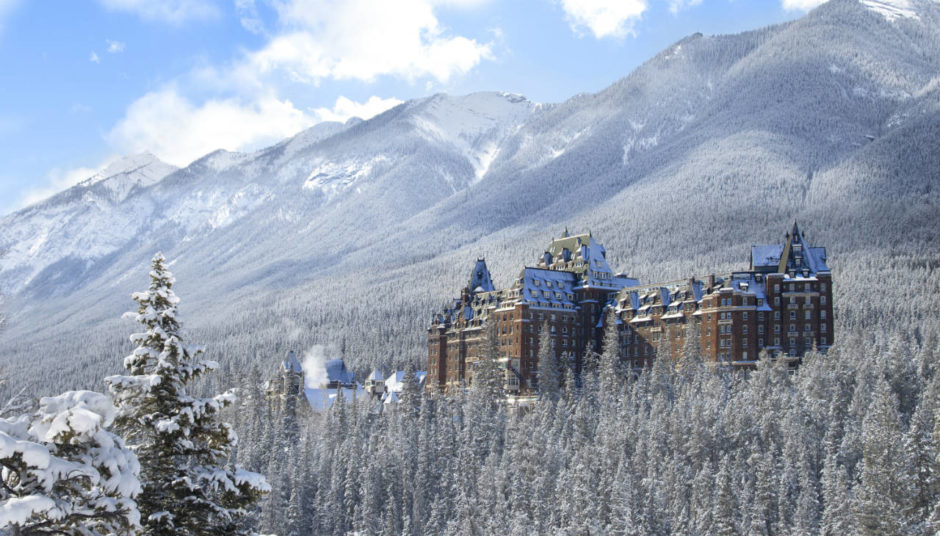 At the foot of Bow Falls sits the Banff Springs Hotel, one of Canada's grand railway hotels—its construction was completed in 1888, and it was remodeled a few decades later to look like a cross between a Scottish castle and a European chateau. Topped with turrets and filled with ballrooms, dining rooms, and tartan carpets, it’s quite the mashup. Even if you’re not staying here, it’s worth visiting for a hot (or hard) drink, just so you can pretend to be European royalty as you sip by the window while the snow falls outside.
Photo: Banff Lake Louise Tourism / Fairmont Hotels & Resorts 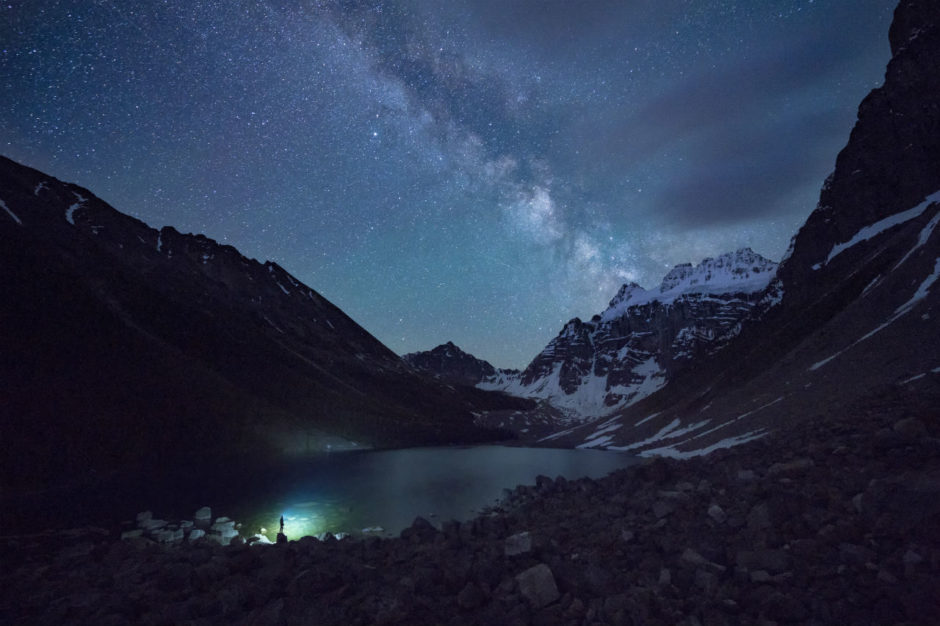 The other night, I was cycling from Tunnel Mountain Campground to a show at the Banff Centre when the aurora started to flash over Cascade Mountain. I wasn’t the only one to spot them. The next morning at the Whitebark Cafe, I kept having to repeat my coffee order to the Aussie behind the counter, because, “Sorry, I’m just exhausted. I was up all night watching the Northern Lights over Minnewanka. They were amazing!” And they were. Lake Minnewanka is the classic spot to see the night sky free from light pollution. It’s a 25-minute drive from town.
Photo: Paul Zizka Photography 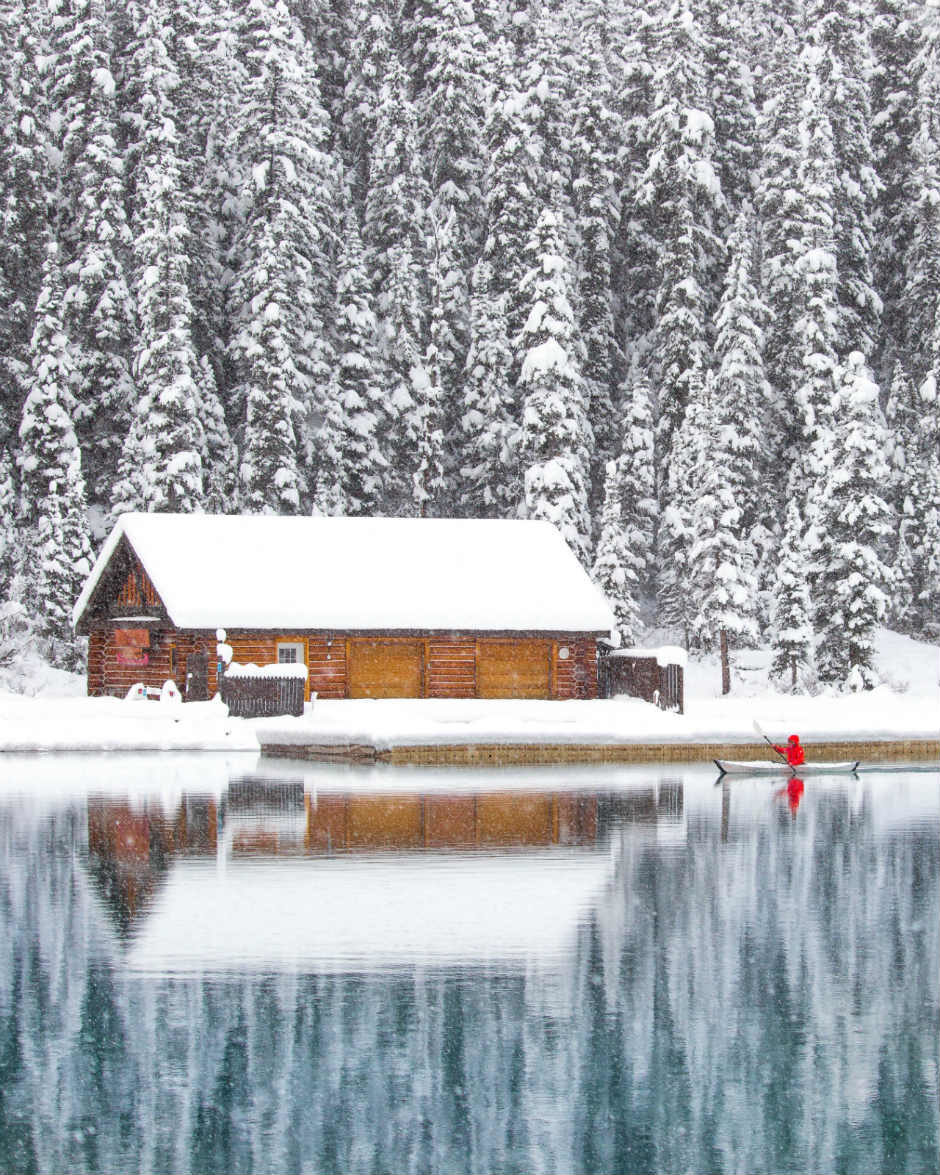 At 5,740 feet above sea level, Lake Louise freezes early and doesn’t typically melt till June. That opens up a slew of awesome activities on and around the ice. Yes, there’s skating, and right next to the Fairmont Chateau Lake Louise is a sweet hill for tobogganing. There’s also great crosscountry skiing on the nearby groomed trails. In fact, you can ski all the way to Moraine Lake in the Valley of the Ten Peaks—so beautiful it was on Canada’s $20 bill for a few years.
Photo: Goldie Hawn

Want to experience the Canadian Rockies for yourself? 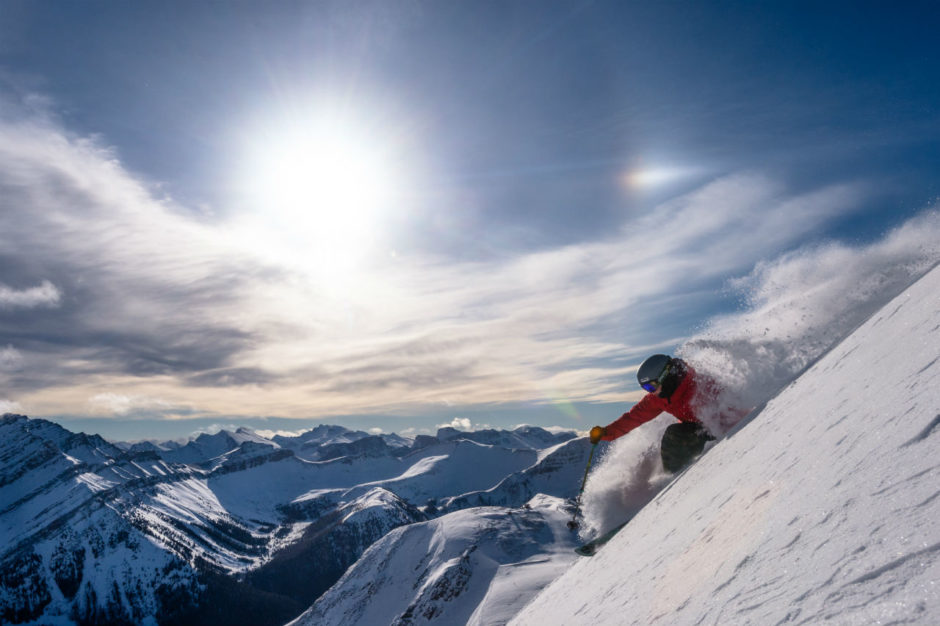 Protected from the mild Pacific weather by the Columbia Range, Banff and Lake Louise are famous for their dry, light powder. During winter, the air is similarly crisp and dry, which means it smells good—so piney and fresh, in fact, that it gets bottled and sold for $23 a pop to people living in Mumbai and Beijing.
Photo: Reuben Krabbe for Banff and Lake Louise Tourism 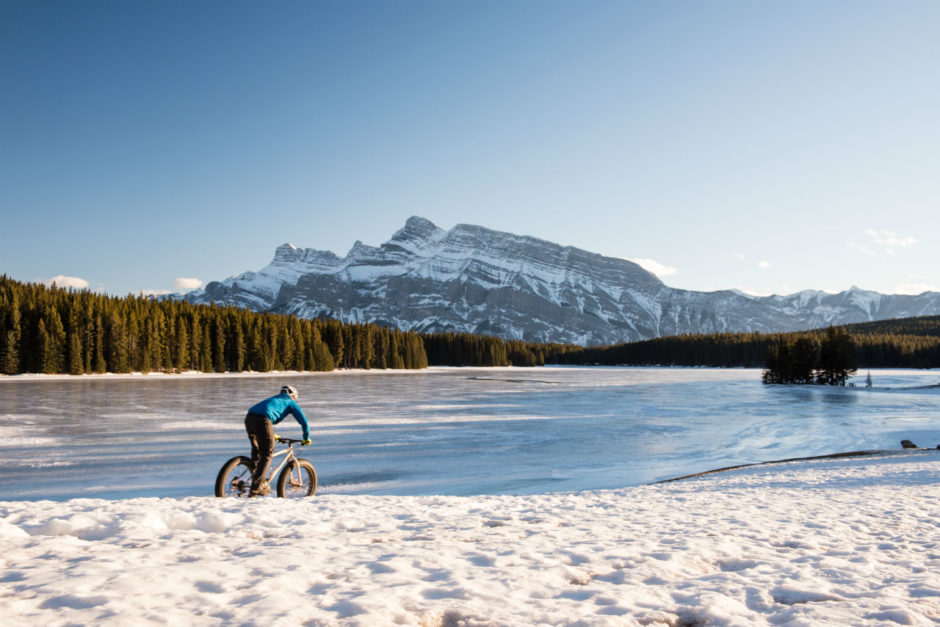 Fat biking is pretty much the opposite of downhill skiing, in that hard, packed snow is exactly what you do want for a fun and flowy ride. So on the occasional day when the powder gods haven’t smiled down on Banff and Lake Louise, and you fancy a change from the slopes, rent a fat bike from an outfitter like Soul Ski and Bike. The guys in the store can give you suggestions on sweet trails. Fifteen minutes east of town along Lake Minnewanka Scenic Drive, Two Jack Lake (pictured) is a popular spot.
Photo: Jeff Bartlett for Banff and Lake Louise Tourism 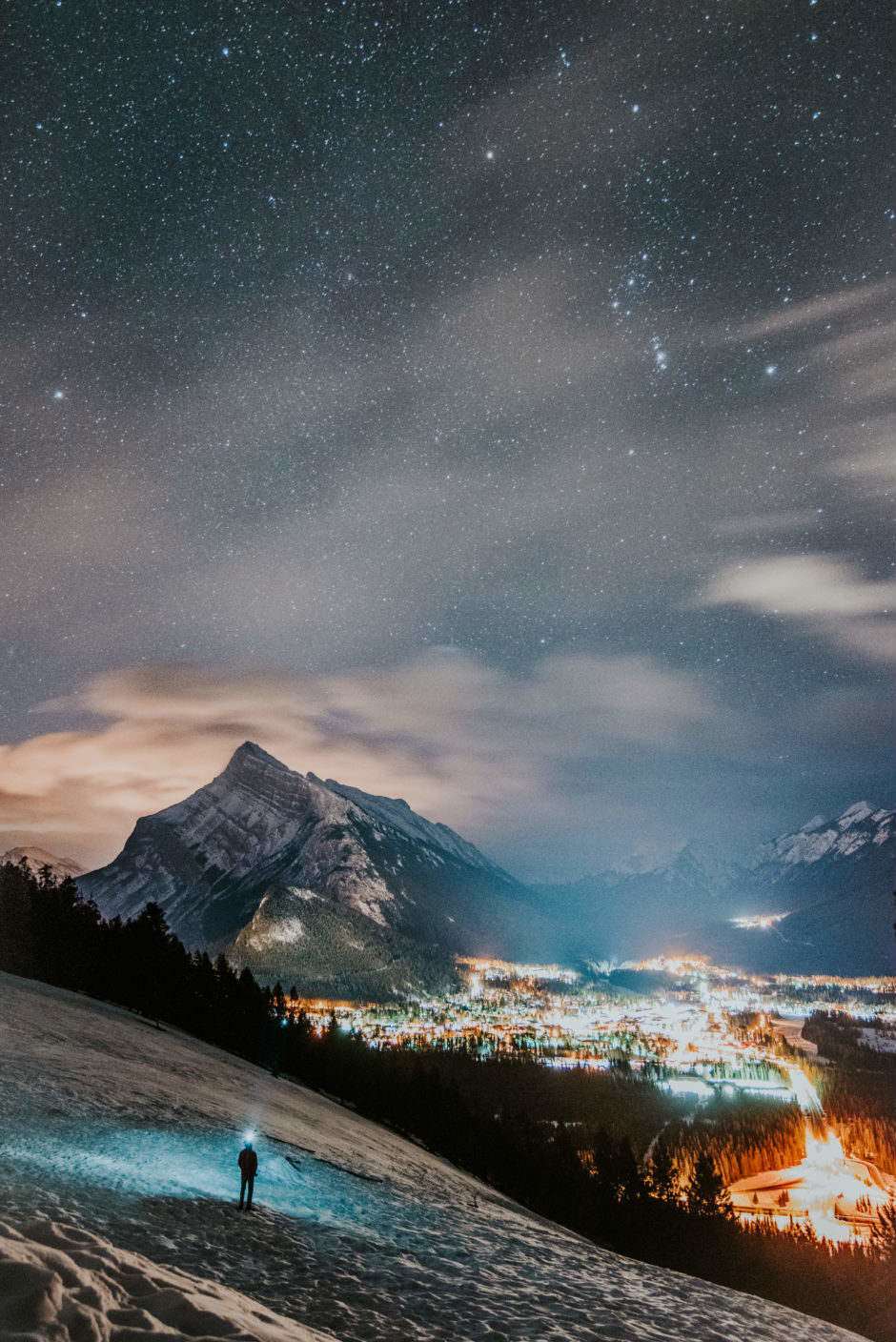 Banff’s population is remarkably young, and it might just have the best, most buzzing après scene of all the Canadian ski towns. Check out the Rose & Crown and Wild Bill’s for live bands, High Rollers for ten-pin bowling and 48 craft beers on tap, and nightclubs The Dancing Sasquatch and Hoodoo for the hopes of a dance with that cute guy—or girl—you saw working behind the bar at the Park Distillery earlier.
Photo: Célestine Aerden 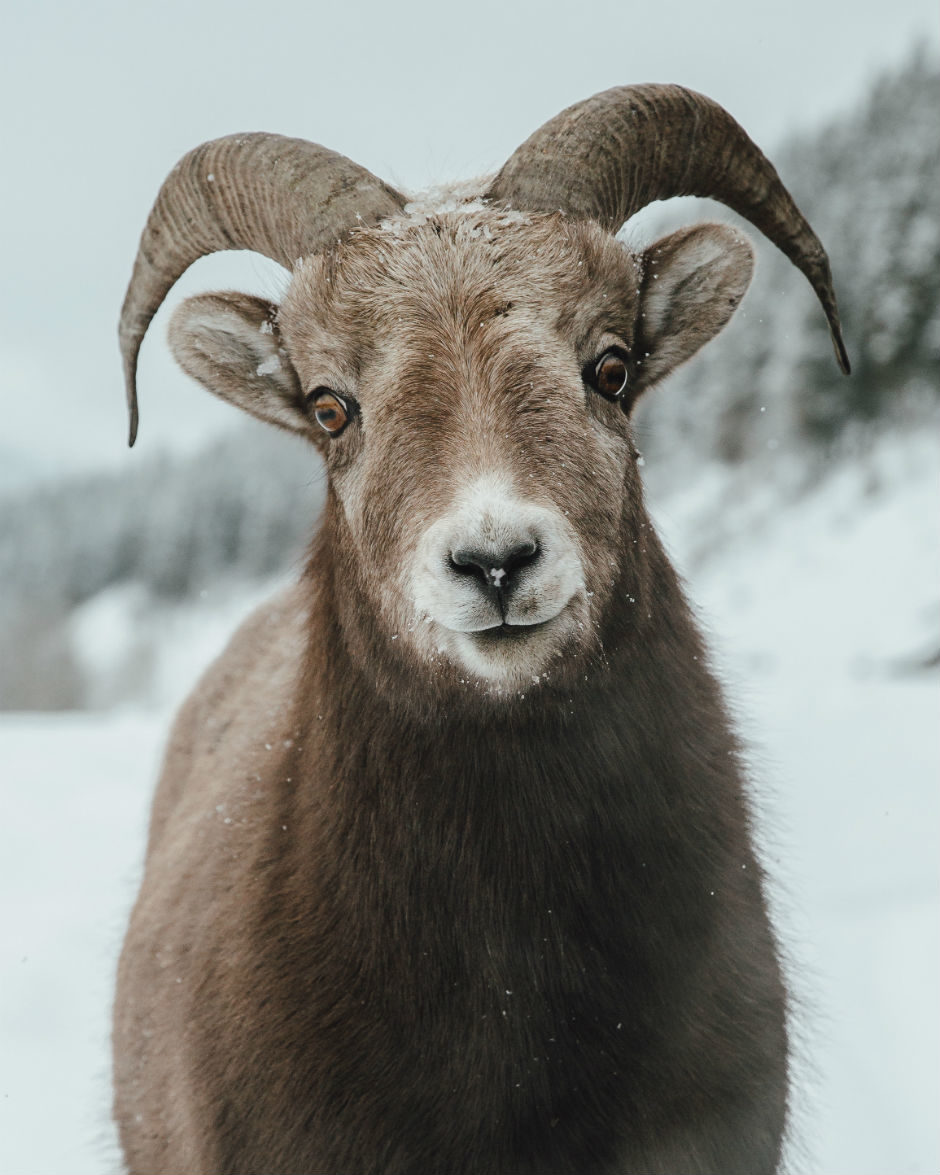 The other day while cycling back to Banff from Sundance Canyon—half in the moment, half dreaming of the chocolate croissant I’d pick up from Wild Flour Bakery in town—I saw a coyote running through the woods. It was amazing to see one so close to civilization, though to be honest wildlife sightings are pretty much par for the course here. The bears are mostly sleeping in winter, but the white-tailed and mule deer, and those giant, majestic elk, will be hanging out in the valley bottom—along with the cougars and wolves—all winter. And there are bighorn sheep, like the one above. You’ve got a pretty good chance of spotting sheep on the Lake Minnewanka Scenic Drive—for them the salt left by the snow ploughs is like mineral-laden candy.
Photo: Mike Seehagel 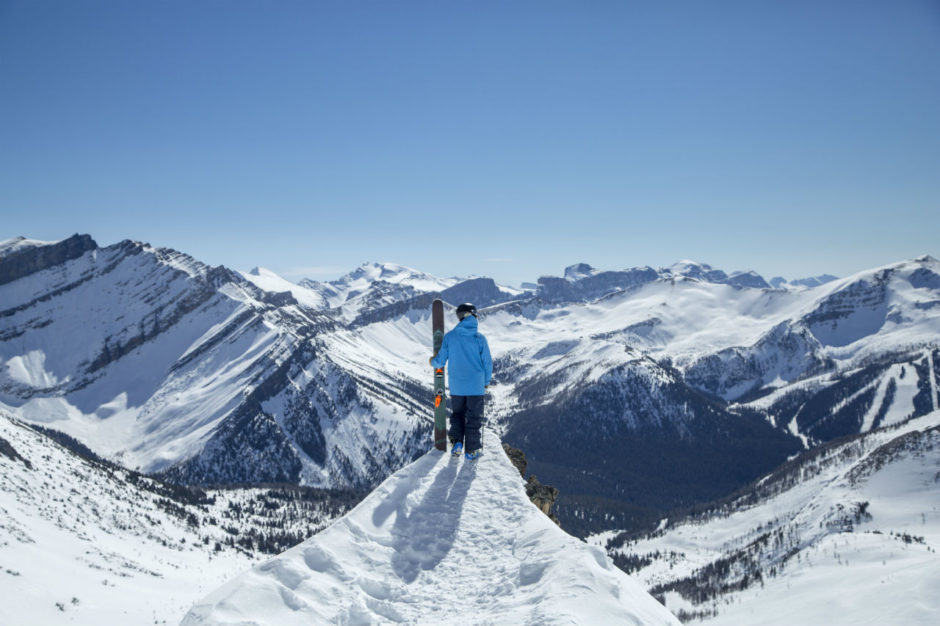 The winter days may be short, but in Banff and Lake Louise the winters days are often full of sun. Bring sunscreen if you don’t want an epic goggle tan after ripping down Lake Louise’s slopes all day.
Photo: Dan Evans 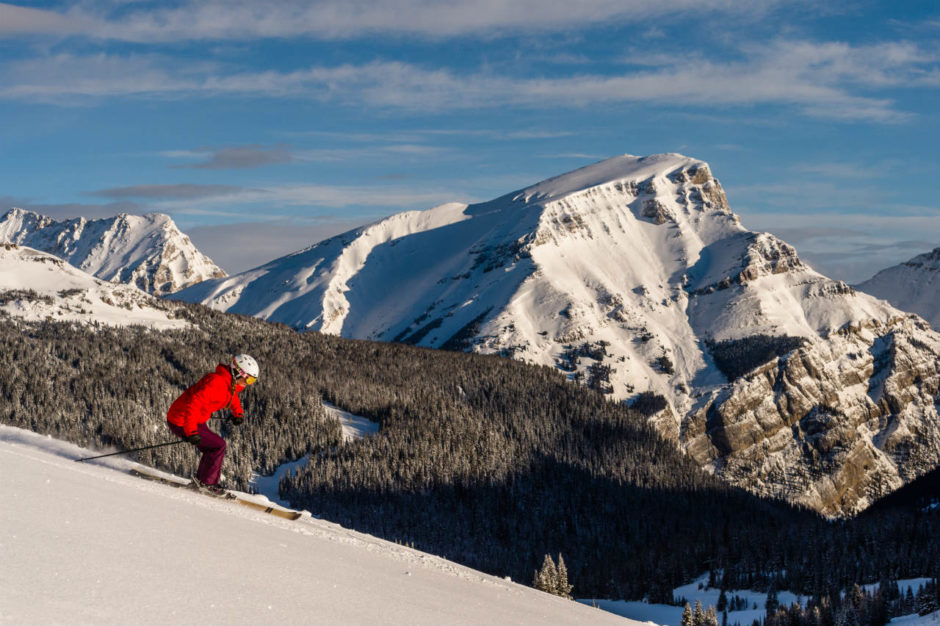 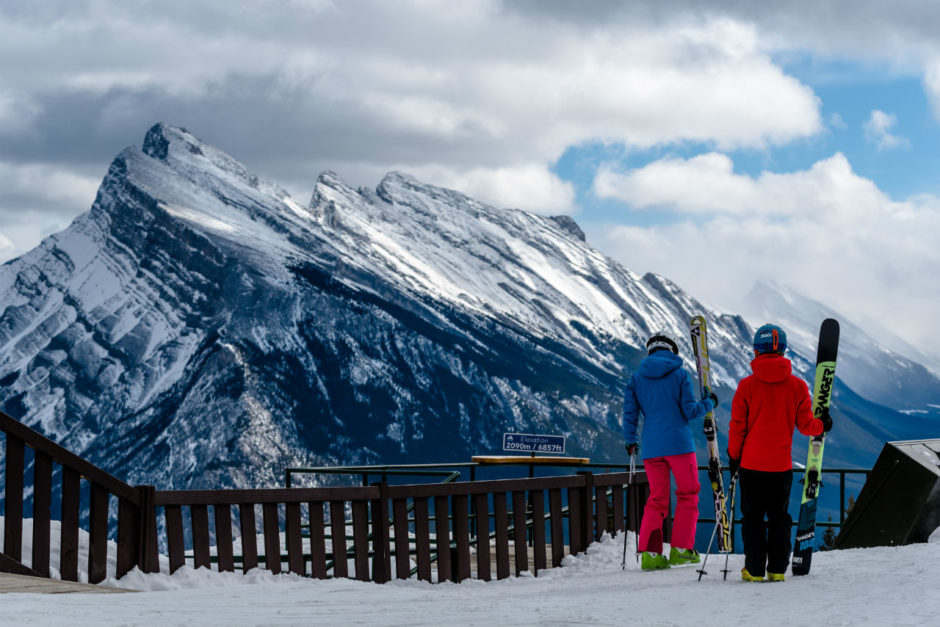 With 60 runs and some of the hardiest terrain on the continent, Norquay is such a fun hill to ski. Last time I was here I went tubing—free with a Tri-Area Lift Ticket—for the afternoon. A kid had lost a glove halfway down the run, so all of us tubers took it in turns to try to snag it as we rode—there was a free hot chocolate in it from the guys pushing us down the hill, after all. I didn’t get the hot drink, or the glove, but I did have a lot of fun. Other, more official events to look out for on the hill are Norquay’s Cardboard Sled Derby, and free skiing on Christmas Day for anyone dressed like Santa, or like Mrs. Clause, or an elf, or a reindeer—basically anyone really bringing on the holiday cheer. Check out the SkiBig3 Events Calendar to see what’s happening when you’re in town.
Photo: Banff and Lake Louise Tourism 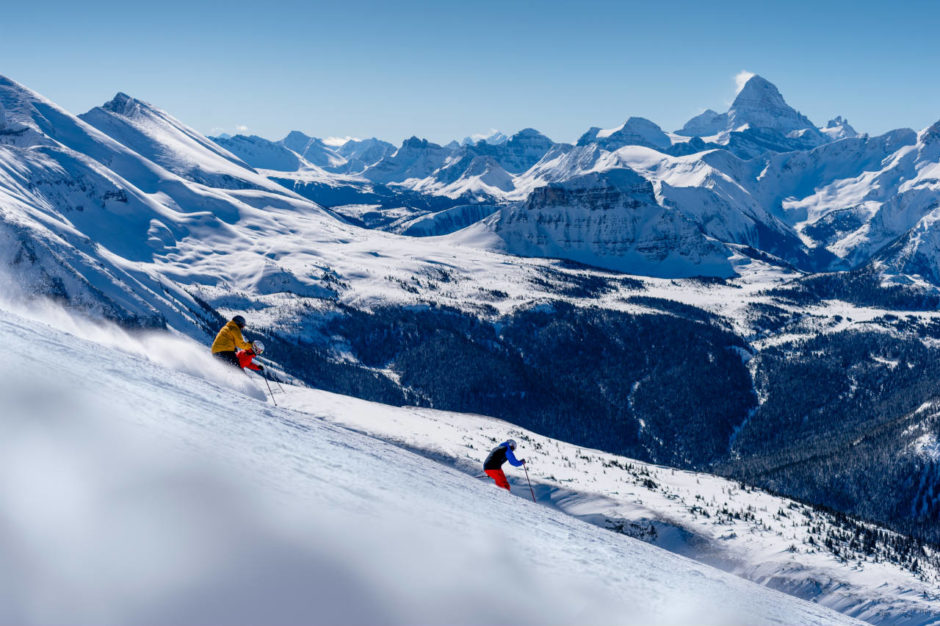 Here’s how good the snow in the Canadian Rockies is likely to be this year: Sunshine Village just became the first resort in the country to open its slopes—its earliest starting date in over 30 years. No wonder all the local skiers are getting hyped up, with early bird passes reported to be booming.
Photo: Banff and Lake Louise Tourism 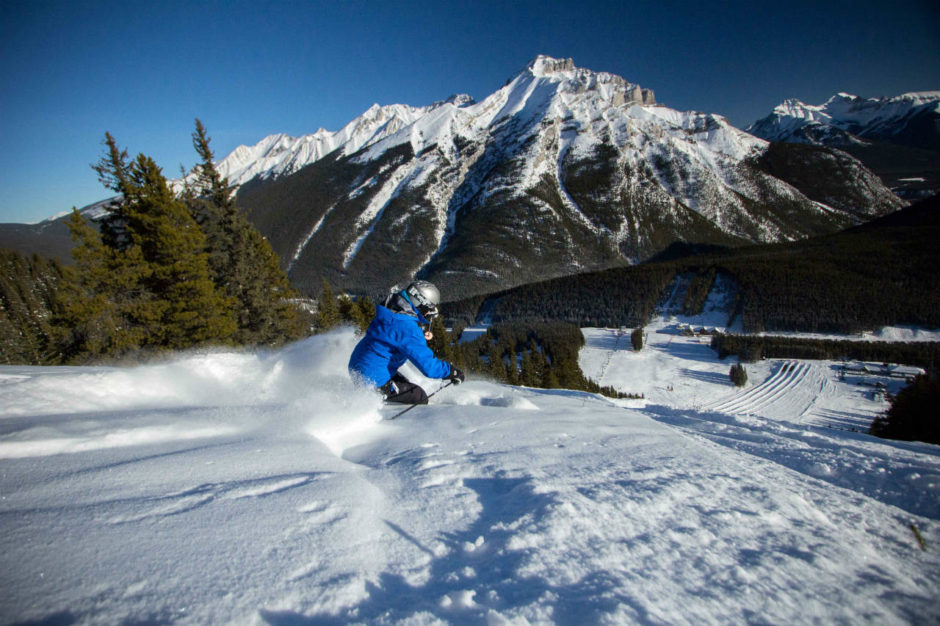 I’ve lived in three of Canada’s mountain national parks, but Banff is the one where I’ve been continually floored by the beauty of the mountains that loom over town. Stepping out of the front door in the morning—snow catching the sun’s rays as it drifts from the ridges of Mount Rundle and Cascade on a perfect bluebird day—never gets old. What makes the day even better is the fact you can leave your Banff accommodation and be up on the hill at Norquay in about 15 minutes.
Photo: Tyler Parker

This post is proudly produced in partnership with SkiBig3 and Destination Canada.
Tagged
Galleries Ski & Snow Insider Guides Banff, Canada
What did you think of this story?
Meh
Good
Awesome