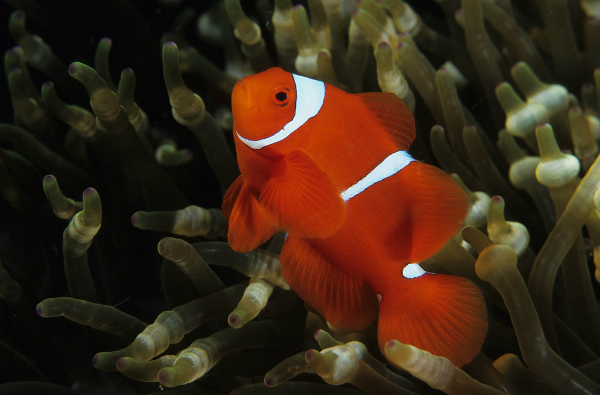 Photo above: petersbar / All other photos: Author

Christina Koukkos reports from a sponsored dive trip to the multi-island nation.

When Matador asked if I’d be interested in joining a press trip there — organized by the PNG Tourism Board — I thought about it for a long, hard, 2.3 microseconds.

From the capital of Port Moresby, I catch an Airlines PNG flight across the island to Tufi Dive Resort. Below us, the relentless green of the jungle is broken only by the occasional river and odd logging road, thin beige meanderings through the hills. The land ends, replaced with turquoise sea mounts that cut through the deep purple of the Bismark Sea.

I think, “People are diving down there.”

On arrival at Tufi, my small group is greeted with smiles, fresh orange juice adorned with hot pink hibiscus flowers, and liability release forms. An hour later, we’re sucking air at 18 meters in the next fjord over. The staff clearly knows what we’re here to do.

The first day of diving is about small stuff: nudibranchs, mantis shrimp, a teeny flasher scorpionfish, a seahorse, and the endemic Papuan western clown fish. Nobody comes to Tufi specifically for the macrolife, however. We’re here for the sea mounts.

The second day we hit Mullaway, about an hour’s motorboat ride straight out to sea. The “we” is a group of five scuba diver girls — including the inimitable Scuba Diver Girls themselves. On the way out, we hold our fists to our heads, up above our ears. Praying for hammerheads.

We quickly gear up, drop in, and circle the sea mount counterclockwise. One of the first encounters is a remora — a cleaner fish often found hitching a ride on sharks. I point it out to my buddy and sign “Big fucking shark.”

It doesn’t take long. Curious grey reefs appear, giving us the eye. A 1.5-meter black-tip shark whips by, as do a few small white-tips. But no hammerhead.

I’m waiting my turn to take a photo of a bat ray tucked into an overhang when our dive guide starts banging on his tank. I shoot over and there it is: my first ever hammerhead! I pump my fists above my head and fin along behind it, shouting into my regulator…and chasing it away, like a total noob. I can’t help myself.

Other favorite sites over the next few days include Veales (similar to Mullaway, but with two hammerheads) and a newly christened dive site called The Overhang, with a cool swim-through.

In addition to sharks, Tufi diving features immaculate coral and giant schools: fusiliers, snappers, surgeonfish, and so on.

We spend our last night in the Tufi area at the Garewa Guest House, a few fjords over from the resort.

As our dive boat approaches the beach, we’re greeted by two-armed waves and welcoming smiles from Fabian, the jolly patriarch of the compound, and his extended family. His son, also Fabian, uses a machete to cut open a coconut for each of us to drink. His granddaughters have decorated our hut, which sits on a small palm-shaded bluff above the beach, with jungle flowers.

As night falls and the weather cools, outrigger canoes loaded with goods for trade float by on their long row to market. The rowers’ singing floats up from the dark water.

The following afternoon I’m back at the airstrip, headed to Walindi Plantation Resort, on the island of New Britain, for more diving. As I watch from a dusty, thatch-roofed waiting area, luggage is loaded into a prop plane by Archie and Alex, our group’s dive guides. The whole village has come to watch the takeoff; it’s must-see TV.

One boy, naked except for the snot oozing out his left nostril, stares at me. I smile. He does not. His eyes tell me I am a strange and potentially dangerous creature. The rest of the villagers keep a safer distance, behind a chain-link fence.

While the resort at Tufi is decorated with carved masks and other local artifacts, Walindi’s restaurant is plastered with photos of sea creatures.

Tufi has a small collection of fish books tucked into a corner of its restaurant, while at Walindi a wall-sized, floor-to-ceiling bookshelf is packed with diving books and magazines. Each bungalow comes with maps and descriptions of area dive sites. The staff gives detailed dive briefings that seem to last as long as the dives themselves.

In short, Walindi Plantation Resort is serious about diving.

Imagine my surprise, then, when we don’t go diving immediately on arrival. We have to wait until tomorrow! The dive boat has already left, explains the manager. And the viz at the nearby sites isn’t great because it’s rainy season. “We want you to see our best diving,” she says.

Inglis makes up for the delay. It’s a sea mount on the edge of Kimbe Bay, about 45 minutes by speedboat from Walindi. Sure, it’s got pristine coral, which goes without saying in PNG. But also a half-dozen small white-tip sharks, a chevron barracuda or three, sleepy cuttlefish, and loads and loads of fish.

The kicker: Four male grey reefs circling a lone female in a mating dance — something I’ve never seen outside the National Geographic Channel. Oh…and did I mention the 30-meter visibility?

The unquestioned highlight of our last dive day is the Mitsubishi Zero Fighter wreck. In WWII, PNG was the scene of fierce battles between the Australians and Japanese. During one mission, the pilot of the Zero Fighter, running out of fuel, somehow guided his plane into a gentle crash landing just offshore, on a sandy bottom at 16 meters. He managed to escape into the jungle, where he disappeared; no one knows (or will admit) if he survived the war.

Alive or dead, the Japanese pilot left behind a formula for a near-perfect plane wreck dive: start with the weightless, “I’m flying” feeling of diving; add a rowdy, fun-loving group of divers on a plane wreck; finish it off with three underwater cameras, and you’ve got the goofiest fun you’ll have underwater. Plus nudis!

Other favorite Walindi sites were South Emma, which has a wicked swim-through, and the aptly named Hanging Garden.

Tufi and Kimbe Bay are just two of many diving opportunities in PNG. At the top of my list the next time I finagle a trip there:

1. Milne Bay: On the southeast tip of New Guinea, Milne Bay is said to be the best macro diving in the country. I don’t believe it, though — the tourism board will just have to bring me back and prove it. Pretty please?

3. FeBrina liveaboard: This comfortable-looking liveaboard dive boat operates out of the Walindi Dive Resort. In addition to the sites in Kimbe Bay, divers on the FeBrina can reach the Witu Islands and the legendary Father’s Reefs. It’s how to go from remote to remote, squared.

Get out your wallet

Papua New Guinea ain’t cheap. Flights are expensive and there’s very little cheap accommodation outside of Port Moresby. Of course, there are always budget options if you know where to look.

Fly: Air Niugini runs regular flights to Port Moresby from Brisbane and Cairns, Australia, as well as from Singapore. There’s not much transportation infrastructure in PNG, so getting around means flying Airlines PNG.

Eat, Sleep, Dive: In Port Moresby, the Airways Hotel is a sleek, heavily fortified hotel within betel-nut spitting distance of the airport. The slightly outrageous $350/night room rate betrays its popularity with foreign workers in the oil and mining industries.

Tufi Dive Resort is truly an escape — the only way in is by plane or by boat. The décor is lush and elegant, with cushioned wicker furniture, traditional carvings and Tapa cloth on the walls, and tropical landscaping around a small pool.

Bungalows start around $160 per person per night, including meals. Boat dives run about $60/tank. Packages are available.

Walindi Plantation Resort sits on 11 hectares of plantation land, right on Kimbe Bay. Starting at $160 per person during peak season, the traditional-style bungalows are spacious and comfortable…at least until 11pm, when the electricity (and ceiling fan) turns off, leaving you gasping in the thick, humid night air.

The meals, included in the room rate, are bigger yet not as refined as at Tufi. Peak-season dive packages offer boat dives for around $60/tank.

Tagged
Diving Papua New Guinea
What did you think of this story?
Meh
Good
Awesome

7 ways to learn about tribal culture in Papua New Guinea

What you can do to help preserve the world’s endangered languages?