I WAS RAISED IN A FAMILY where meals were an event and the more people you shared with, the better. You didn’t even have to know those people well. Just pull up a chair and fill your plate; by the time after-dinner drinks are poured, you’ve shared an experience much more than a meal.

Guy Michlin, co-founder of EatWith.com, subscribes to the philosophy that more people around a table means a better meal, and that sometimes the food isn’t the most important part. In 2010, after one too many nights of souvlaki while on vacation in Crete, a friend of a friend set up a dinner for Guy with the Papadakis family in a Cretan suburb. Together, they shared makaronia with kreas vodino and tiri athotiro (spaghetti with beef and a local Cretan cheese) in a small two-bedroom apartment. Guy left the four-hour dinner with a bottle of local Cretan liquor (which he still has…though emptied) and an idea: He wanted to create a community of enthusiastic guests and passionate hosts that would allow travelers to connect in new ways with locals in countries around the world.

While in Spain, Guy took some time out from an EatWith dinner he was attending to talk to me about his constantly growing new community of foodies, travelers, and locals.

TW: EatWith.com came about because of an experience you had in Greece, and you’ve said on your website it’s your hope that people have a similar eye-opening experience. Are you finding this is happening for your users?

GM: Oh yeah, totally! If you read some of the reviews on the website, they say things like “this was the highlight of the trip” and “this is the first time I’ve had a chance to connect with locals.” So the feedback so far has been amazing.

I went to an EatWith.com dinner tonight — I’m still here, actually — and I spent an hour talking to a woman who is half Palestinian and half Jordanian. As you probably know, there are a lot of issues between Israel, Palestine, and Jordan, but just sitting there talking with her is something I would normally never have a chance to do other than in this context. So we’re definitely seeing on a daily basis our initial vision for EatWith.com come to life. At the end of the day, food is something that is very uniting and it makes you put away all your differences.

This dinner tonight really symbolized for me that there is something very strong in bringing people together over food.

You basically have the world at your table.

Yes, it’s true! We had people from Japan, Jordan, Belgium, and New Zealand, and they all booked online within the last two days.

So it seems very simple to book a dinner then?

I want to say it’s very easy, but I’m sure we have things we can improve on the website. But we’re at a point where you log on, make your selection, then show up for dinner.

I told a few friends I was doing this interview with you and explained that EatWith.com is basically like Couchsurfing or Airbnb, but for dinner guests. What makes EatWith.com special and stand out among similar crowdsourcing travel sites out there?

I can’t speak for other websites, but trust and safety is at the top of our minds. Our aim is to create safety and trust both within the host and guest communities. We are vetting all our hosts either personally with our own staff on the ground in Tel Aviv, Barcelona, and soon New York, or we’re working within our community. 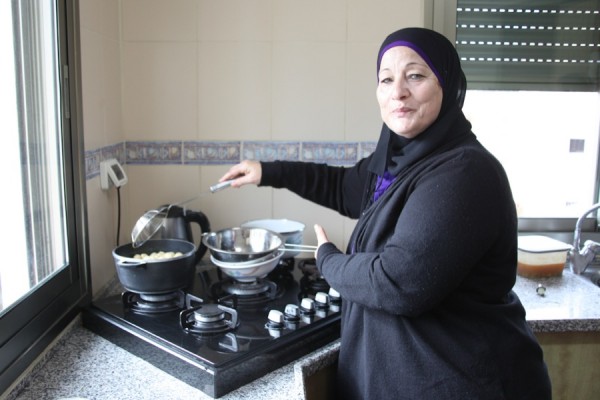 The idea is that when you arrive at a home, someone from EatWith.com has been there already, checked out the ambiance, tasted the food, and made sure the host has hospitality skills. So it’s not just some random person off the street who opens a profile and then you’re going to their house.

Along those lines, we also have insurance in case something does go wrong. It covers all the guests. It’s currently only in Israel, but we will be soon extending it to other parts of the world.

When you say you have people that vet hosts, are they staff members, food bloggers, or photographers like with Airbnb?

So far in 90% of the cases, it’s our staff members. We have staff in Israel, Spain, and the US. The rest are members of the local community.

[laughs] That’s actually part of our secret sauce, but I will say it’s all of what you said.

Can we talk about the hosts for a little bit? There’s an application process to become a host. What is that process like?

Right now, you have to fill out our application, which is a little bit long. But this is because we do want to see people are committed and not just writing two lines before becoming a host.

We take being a host very seriously. We want to make sure people have a great experience and that the host is willing to invest the hour or two it takes to build a profile. After that, there’s an interview. If you’re in Spain, Israel, or New York, someone will visit you. If you’re somewhere else, there will be a Skype interview, then someone from the community will come for a visit as part of our vetting process. Then, it’s up to guests to rate you on your profile after a dinner.

We’re really trying to make it so that, in each new place we open up, the majority of new hosts would be vetted either by a staff member or a member of our community to make sure we’re starting out with a high standard.

I’m glad you brought up opening up in new places, because I wanted to ask about expansion. According to your website, you’re hoping to open in London soon. How is expanding into new places going?

We’re hoping to open in 6 more countries by the end of the year. Right now, we’re in Israel, Spain, and very soon the US and UK. We’ve just opened up in Brazil as well.

Wow, that sounds exciting! You have a lot of hosts involved all over the world now, but I have to ask — how did you get the first hosts onboard with this idea? 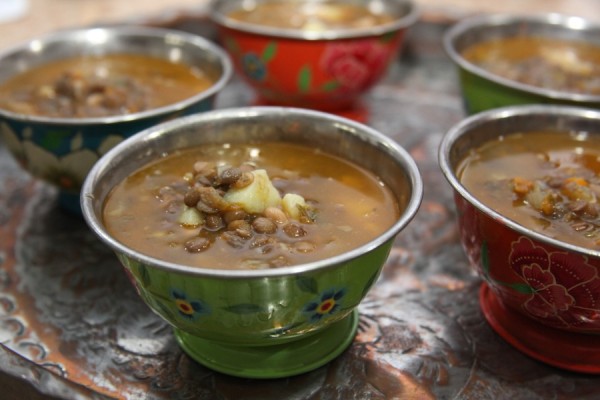 To be honest, it wasn’t easy because people thought we were crazy! Both here in Spain and in Israel. So, in Israel, the first host was actually my mother. Then it was friends of friends, and then people from cooking schools and meetups.

But the first two months was a really hard sell because nobody actually understood what we were trying to do. There was nothing like this out there, so it was hard to relate to. But once we had ten hosts up and running, people could see what it was all about and see references for our hosts. It became much easier for people to understand.

Aww, that’s wonderful that your mother was your first host. Moms are great like that. With expansion plans, that means you probably have to travel a lot. Has Eatwith.com changed how you travel at all?

Totally! I was here in Spain, where we have the biggest presence, ten years ago with my wife. We went to all these tourist places in La Rambla, and when we came back to Israel, I told my friends I didn’t know why people were always talking about Spanish cuisine. We ate a lot of fake paella…. But now when I come here, I can actually sit with locals, eat real traditional food, and talk about day-to-day things, where they think I should visit that isn’t touristic.

It actually opens up a whole new perspective about the city and now when I come here, I actually get a chance to experience Spain like a non-tourist. It has opened up a window to a whole new world as a traveler.

I know when I travel, I like to find out where locals eat, even when it’s not in someone’s home. In Rome, I ended up in a former horse stable turned restaurant down a back alley that was full of locals, and probably had the best dining experience of my life.

YES! That’s exactly it. I know what you’re talking about.

That’s a really great question. We have big debates about it among our team. I want to believe it’s for everybody because when it started, it was based on my travel experience. I thought it was only for travelers. But the reality in Israel is that almost 50% of our users are locals. 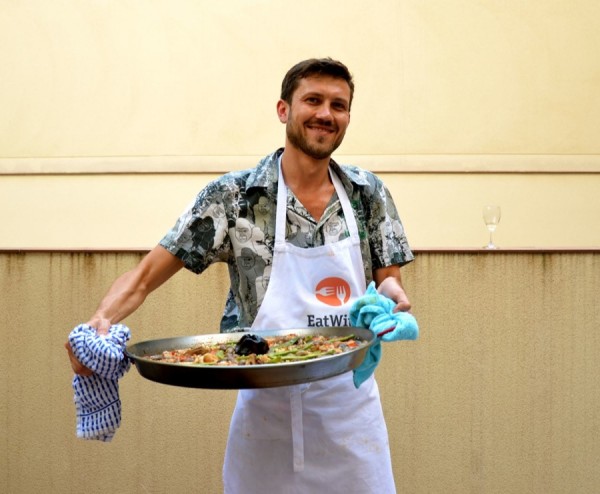 We have people on the team who are very much foodies. I’m not a foodie actually; for me, this is much more about the human encounters and meeting new people and cultures.

We had all these discussions — should it be about food, about people, about tourists, about locals — and we have decided for now to leave it as an open-ended question, and see who wants to use it. So far, we’ve seen everyone. Foodies, tourists, locals. All sorts of motivations and different audiences on our platforms. It’s really very exciting.

With all this talk about food, I have to ask. I know you’re not a foodie, but you sound a lot like my husband, who just calls himself an enthusiastic food eater…

Ha! So, as an enthusiastic food eater and as a traveler, where is your favourite place in the world for food?

There are other people on the team who would be much better at answering this question. [thinks] Wow, that’s a tough question.

When I asked my husband this question, despite having traveled to places like Malaysia, Madagascar, Indonesia, Bangladesh, and India, he answered without a second thought: “My parents’ kitchen and my mom’s taco salad.”

OH! Okay, for me it’s my mother’s schnitzel. My mother has Austrian roots and my grandmother had a woman who’d come once a week and she would cook. She was from Halab (modern-day Aleppo), Syria, and she made kubba. I don’t know if you know what kubba is…

I don’t, but I’m totally going to look it up.

That’s what I miss most. I remember as a kid, we used to eat it every Friday when we came to visit my grandmother. It’s one of my favourite dishes. And it doesn’t matter where I go, I never manage to find someone who does it as well as she did. So yeah, it’s that and my mother’s schnitzel.

I totally understand! I’m like that about my Oma’s Schwartzwäldertorte (black forest cake). It never tastes as good as my Oma’s. One last question: You get to travel and visit all these homes and wonderful-sounding hosts. What’s your ideal dining experience? Do you even have an ideal, or are you just open to the experience?

I don’t actually have an ideal. If you think about a “wow” experience, it’s comprised of three things. It’s the food, the host, and the ambiance of the space. And the weight of those three things is different from experience to experience. It’s not specifically dependent on the host, but also on the guests who show up…which is its own magic.