Few places in this world lend themselves as well to a surf road trip as the vast and varied Queensland coast. Start by flying into Brisbane, picking up a camper, and spending a few days amongst the hustle and bustle of the Gold Coast hallmark breaks before heading north.

As the mileage clocks up, so does the serenity and serendipity. Sure, most surfers have heard of Kirra and Snapper Rocks, even Stradbroke Island and probably Noosa. But Nossa’s still only about an eighth of the way up the state’s east coast. There’s a lot more to surfing in Queensland than the average traveler is aware of, as I discovered just recently. 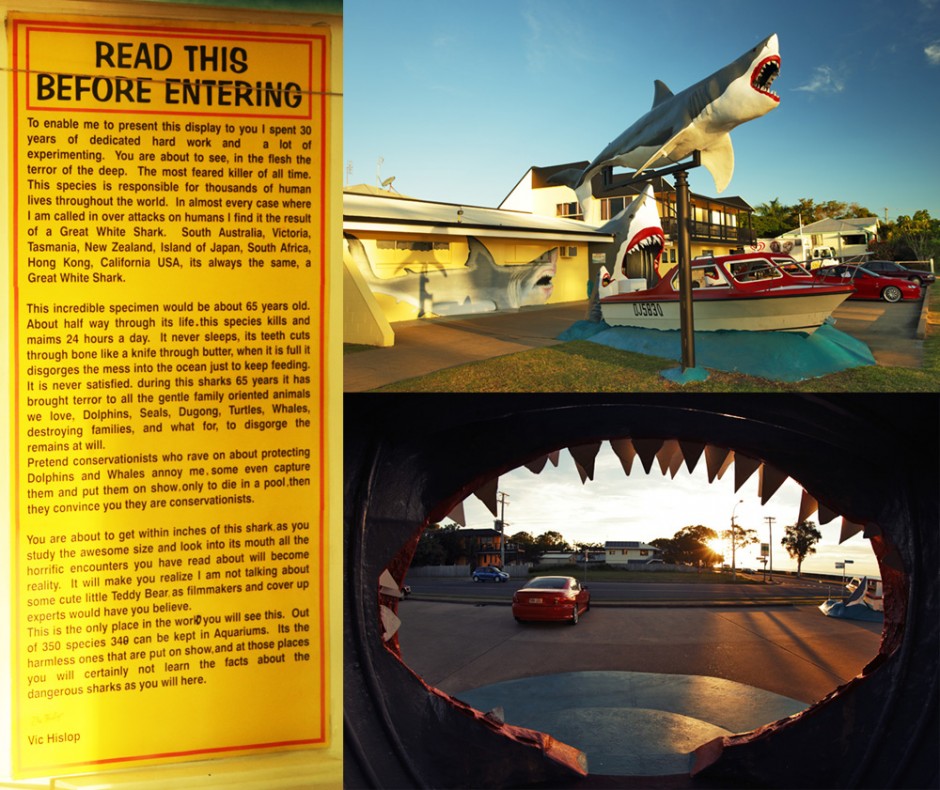 The Physical Impossibility of Death in the Mind of Someone Living

Vic Hislop, once described as the "The Great White Art Hunter" in The Australian weekend magazine, is the man behind the controversial and terrifying shark show. The famous shark fisherman, who provided the carcasses for Damien Hirst's infamous The Physical Impossibility of Death in the Mind of Someone Living -- or, as I describe it, the big tiger shark preserved in a tank of formaldehyde -- has divided opinion throughout his career, vilified and celebrated in equal measure. This is not going to be first on everyone's to-do list, and I can tell you it wasn't on mine. Working in the water, I don't need to fan the flames of any (ir)rational fears lurking in the recesses of my mind. But it certainly makes for a great photo op. 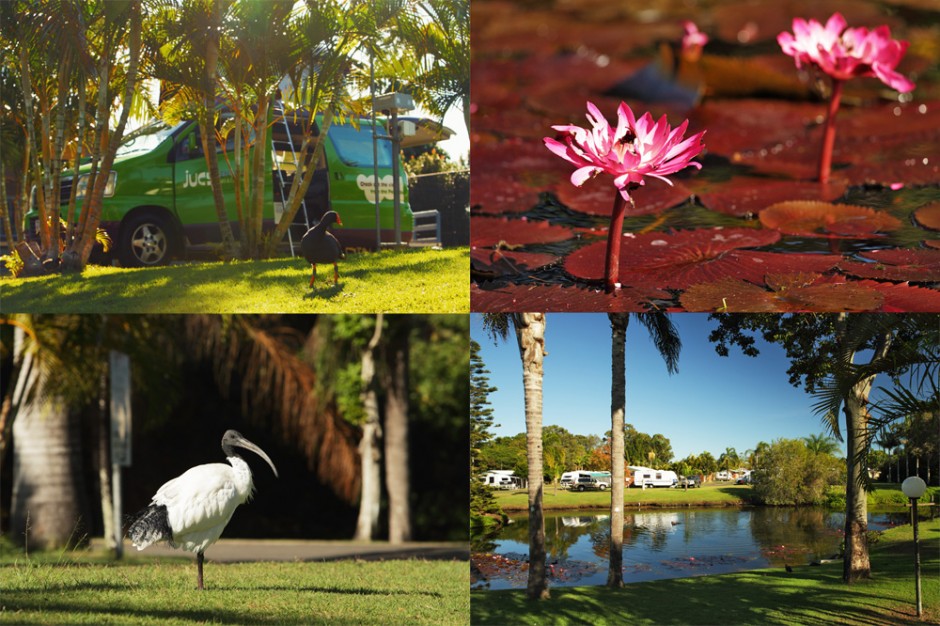 Breaking up the drive north with a night in Hervey Bay works well, and Fraser Lodge is a great spot. The facilities are excellent, and in fact I'd never 'camped' in such style. I took a powered site on grass by the pond and awoke to the sound of birdsong in the balmy morning sun. Clockwise from top left: Moorhen and camper; pond lilies; the view from the roof tent overlooking the pond; one of the many ibis (a bird which I'd only previously seen in captivity) that call the holiday park home. 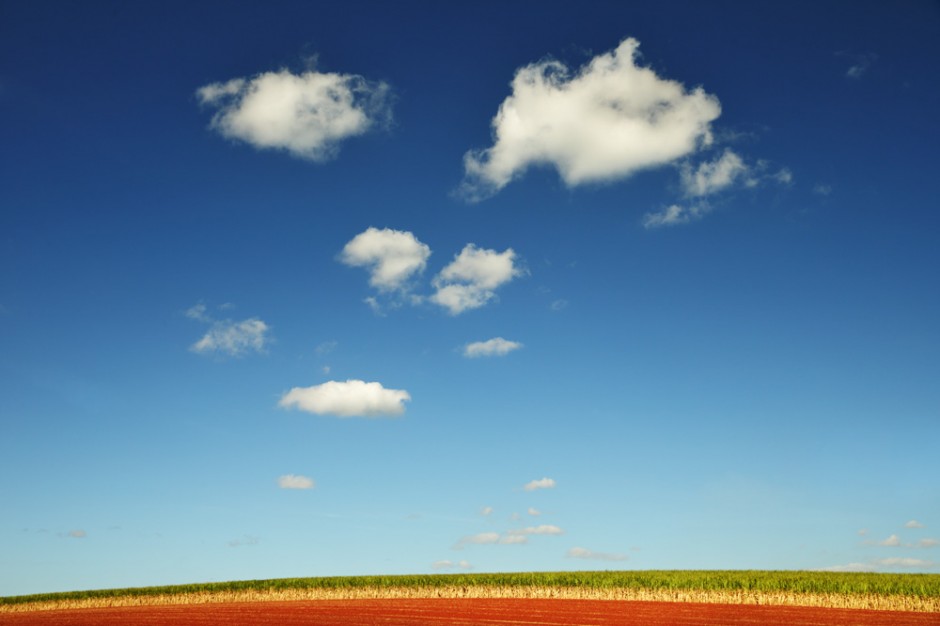 The road north from Hervey Bay is flanked by terracotta soil, supporting all manner of agriculture. At one stage, sugarcane fields undulate as far as the eye can see, a scene, for me, reminiscent of Mauritius. 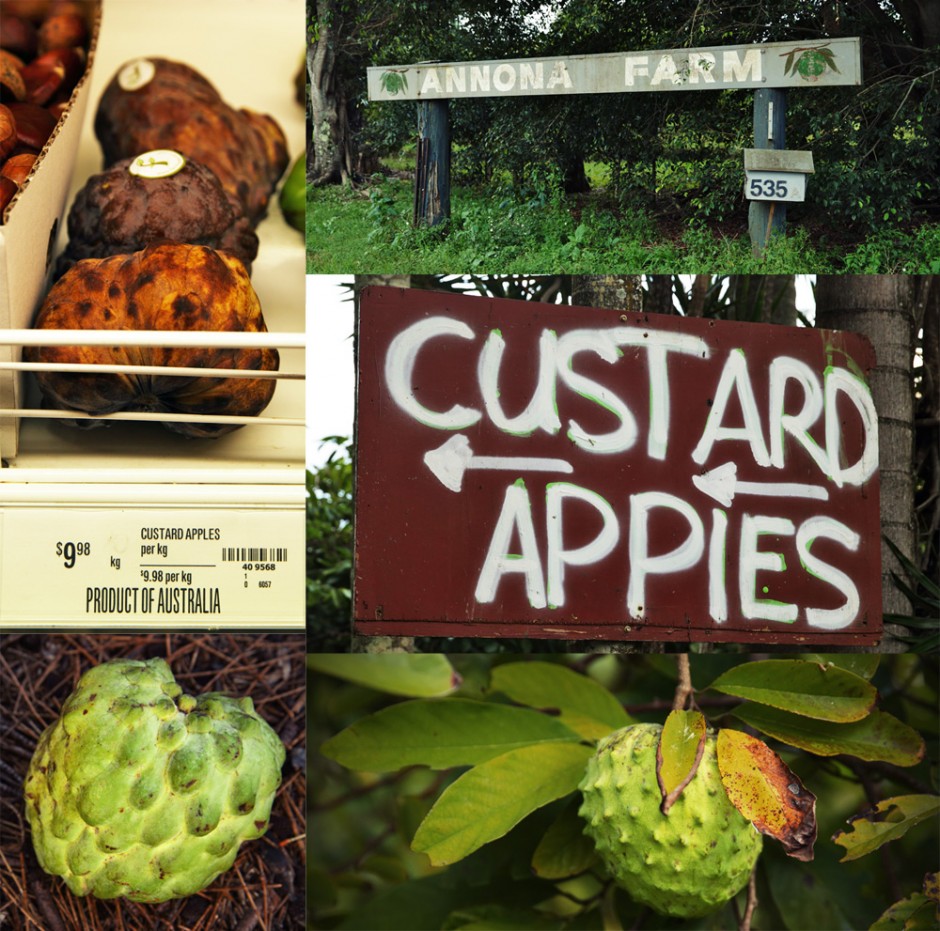 Fruit of the gods

I'm backtracking here, as these pictures were taken in the far south of Queensland, at the start of my journey, but one of the aspects I most enjoyed about Queensland was the fresh fruit. Everyone knows that, where possible, fruit is best eaten close to the source, and Queensland grows just about every fruit you can think of. There are none, however, as majestic as the custard apple. Known as cherimoya and anona in other parts of the world, there are two main varieties found in Queensland: the Pink Mammoth (bottom left) and the African Pride, both part of the Annona cherimola species. Mark Twain once described the custard apple as "the most delicious fruit known to men," and I'd have to agree with him. Tip: They don't travel well and so tend to command very high prices in the shops (see overripe brown ones and accompanying price at supermarket top left). Whilst driving, look out for signs by the roadside -- you'll be able to score superior fruit at a fraction of the astronomical prices found in stores. A word on flavour and ripeness: Much has been written about the taste, but none really does it justice. I would simply recommend finding one and trying it. Only the white flesh should be eaten -- DO NOT EAT THE SKIN OR SEEDS. The fruit is ripe when the skin is still green but yielding to light pressure. If the fruit is brown, it's past its best. 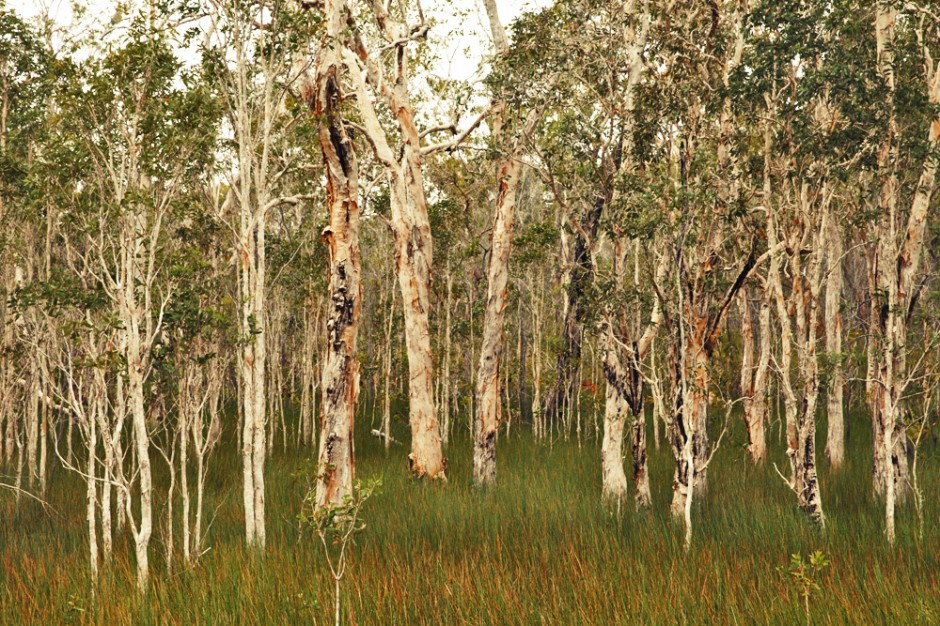 After the agriculture comes vast tracts of bush. Gum trees (eucalypts) abound -- there are in the region of 700 species native to Australia, as opposed to about 12 naturally occurring overseas. A handful of varieties of gum leaves are the koala's only food source. 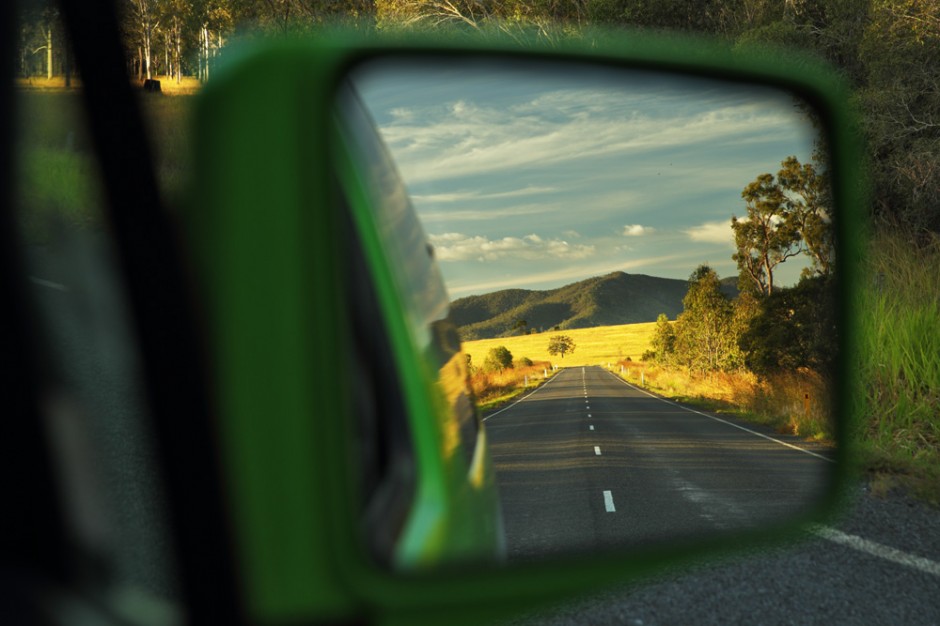 From time to time the bush will break to reveal rolling grassland punctuated by thickly forested hills. The way the grasses glow in the evening light will stop you in your tracks. 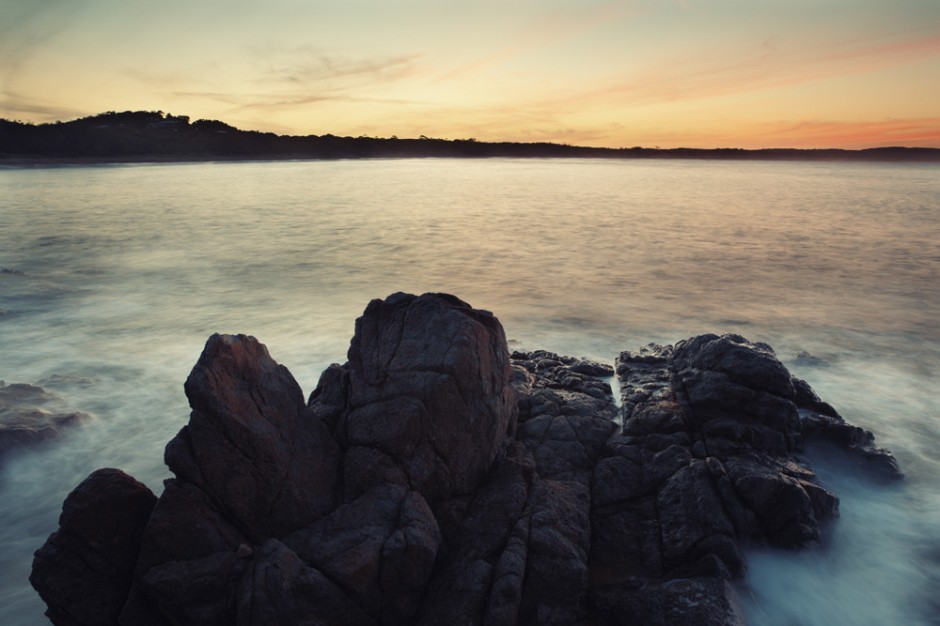 This was the sight that greeted me the evening I arrived in Deepwater National Park. This was taken looking northwest across the sweeping bay (7km of beautiful sand and the odd red rock) at Agnes Water. 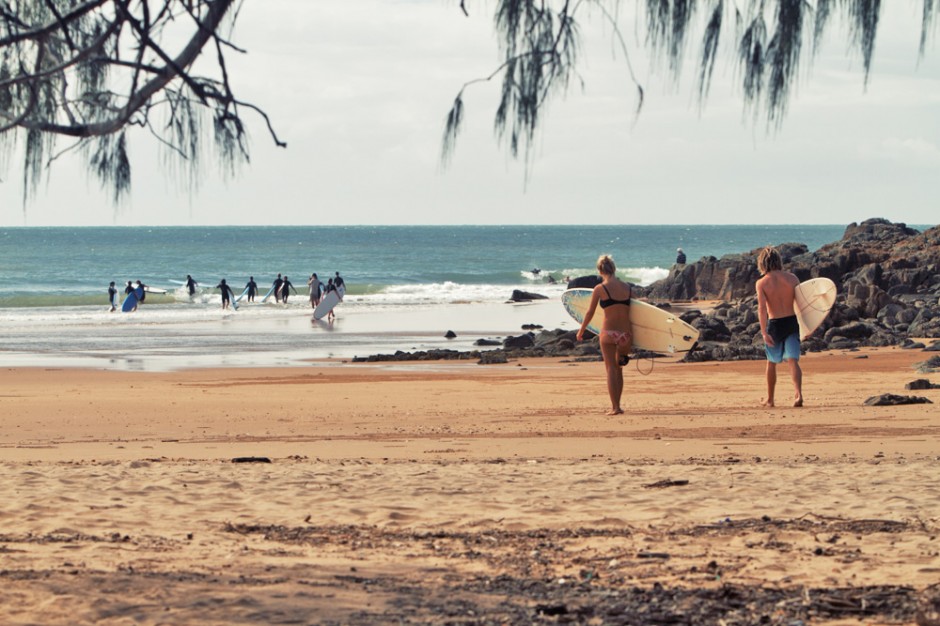 Agnes Water is the perfect place to learn to surf and holds the title of the most northerly surfing beach on Australia's east coast; the Great Barrier Reef blocks decent surf from penetrating further north. The water is warm year round and the waves can be really fun. There is a well-stocked surf shop in the centre of town, which also holds a surf school, Reef 2 Beach, so whether you're a learner looking for a lesson or a more advanced surfer looking for a bar of wax, you'll be taken care of. 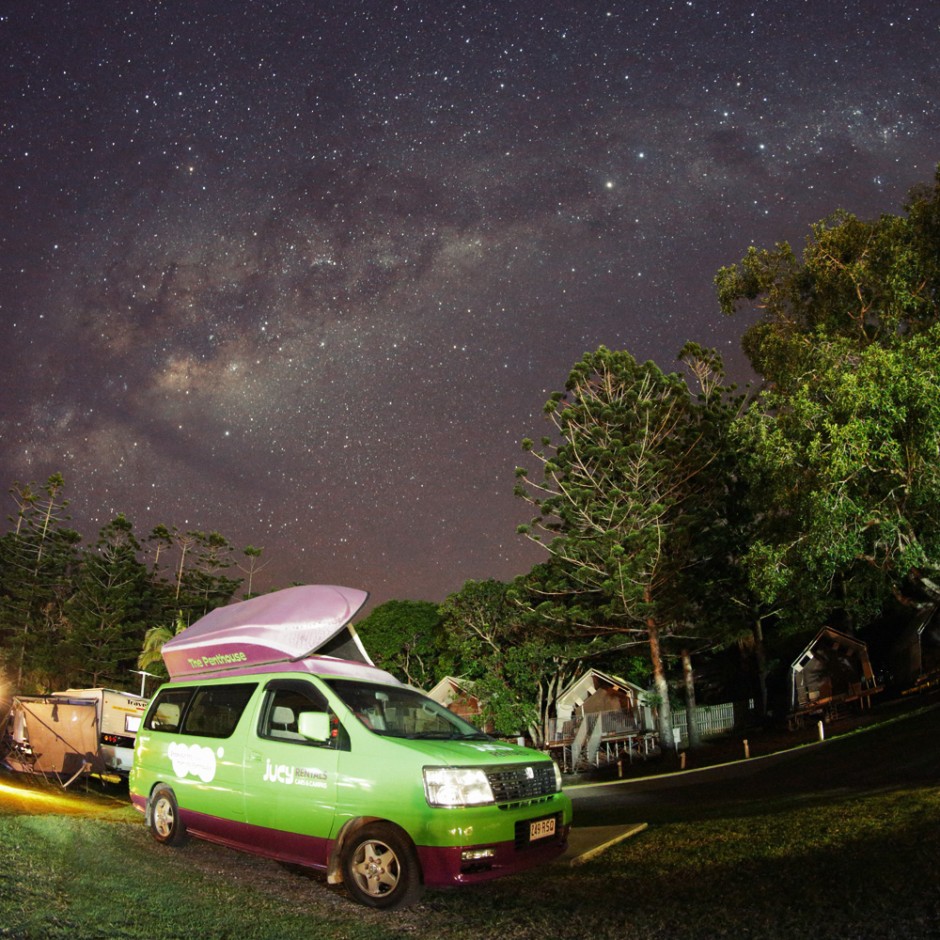 Camping under the Milky Way

To say Agnes Water Beach Caravan Park is well positioned is an understatement. My powered site was about 50 yards from the sand, making for a very leisurely dawn patrol. That wasn't the only plus point, though, as on clear nights, with Agnes Water being so small and therefore light pollution almost nonexistent, I'd unzip the canvas on my Jucy poptop camper and marvel at the firmament blazing away above. 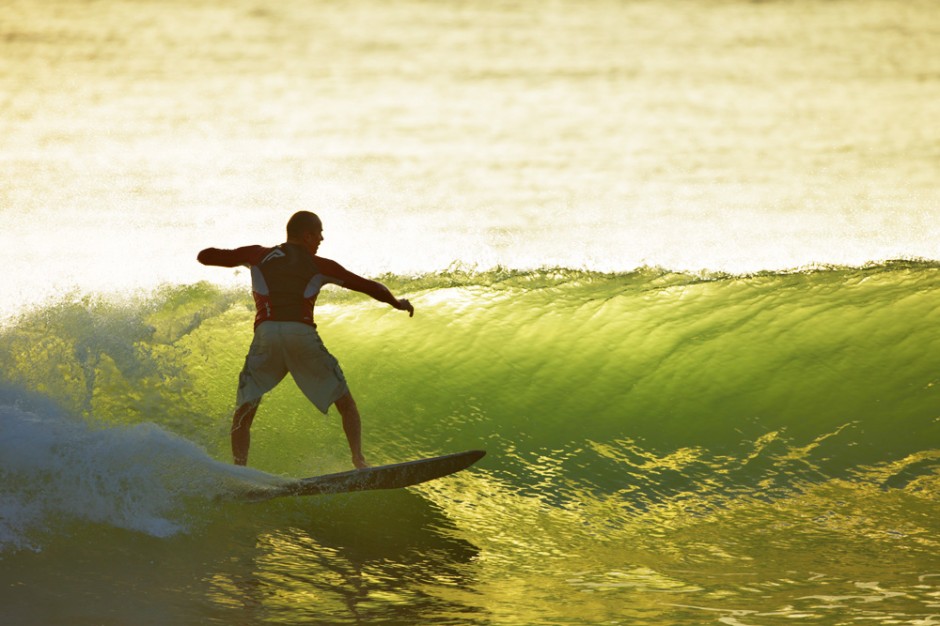 The fringes of the reef

The beach at Agnes Water isn't the only place to surf in the area, and it's fair to say there are some pretty fun waves elsewhere. The trouble is finding them and getting them on the right conditions. Neil Mergard is the man where this is concerned. He owns 1770 LARC! Tours, which provides tours of the area in ex-military LARCs (Light Amphibious Resupply Cargo vessel) and may also set up specific, personally guided missions to remote breaks on the fringes of the Great Barrier Reef. Here's Neil, on a morning when the surf was flat almost everywhere, at a break he took me to that still had some playful waves coming through. 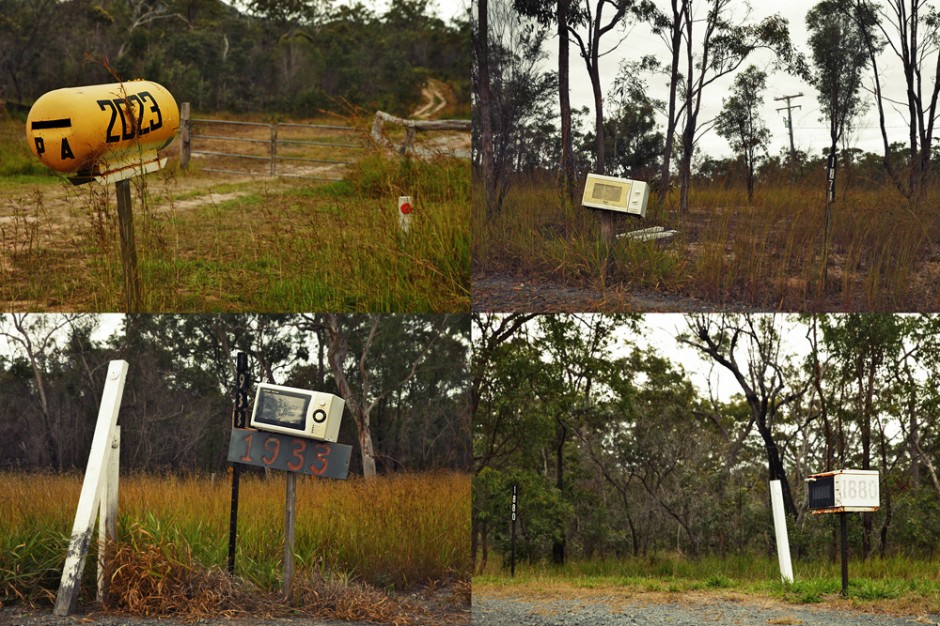 The first time I saw a microwave on a post by the side of the road, there was no number or obvious sign of what it was. I saw another one -- equally obscure -- wondered what it was doing there and was about to ask a local, when I stumbled across a third that had a house number on the post. A very novel use of one's defunct microwave! I also saw gas canisters and beer kegs. 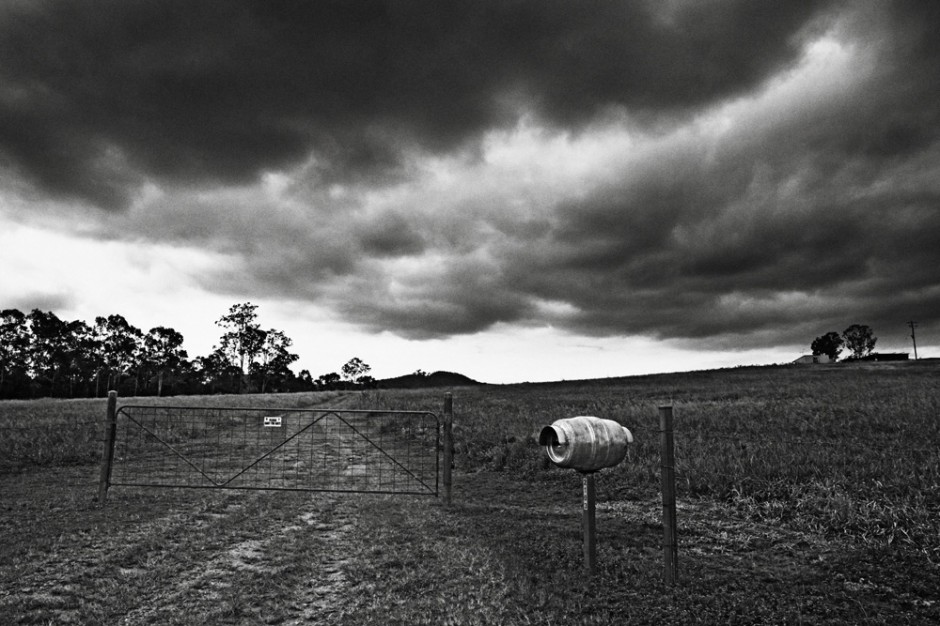 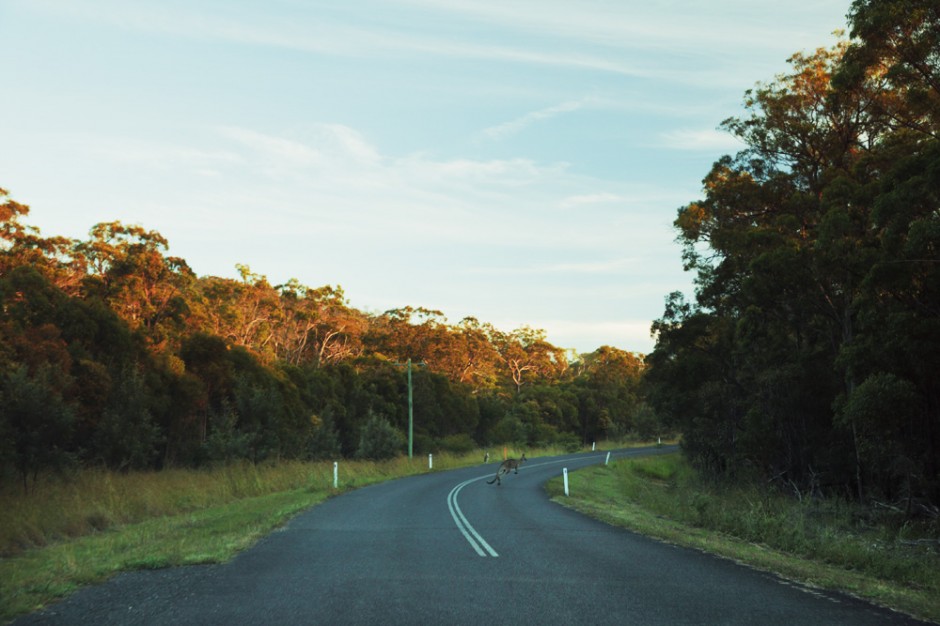 Constant vigilance is vitally important when driving anytime, but particularly from dusk until dawn. These guys are everywhere and can bound from the long grass with little warning. 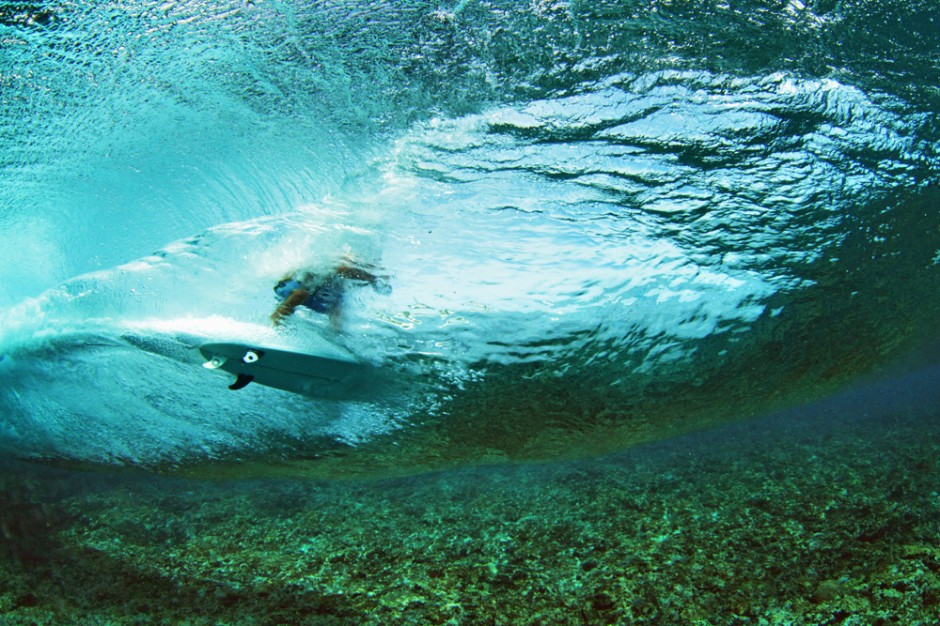 I mentioned Neil knows this zone like the back of his hand, and that knowledge enabled me to enjoy one of the most memorable days of surfing I've had the pleasure of experiencing. I have to extend huge thanks to Neil for pulling out all the stops to help me score this one. Here's my friend, underground charger Paul Buckland, fins scything through a crystalline cylinder spinning just a foot or two above the coral on the edge of the Great Barrier Reef. 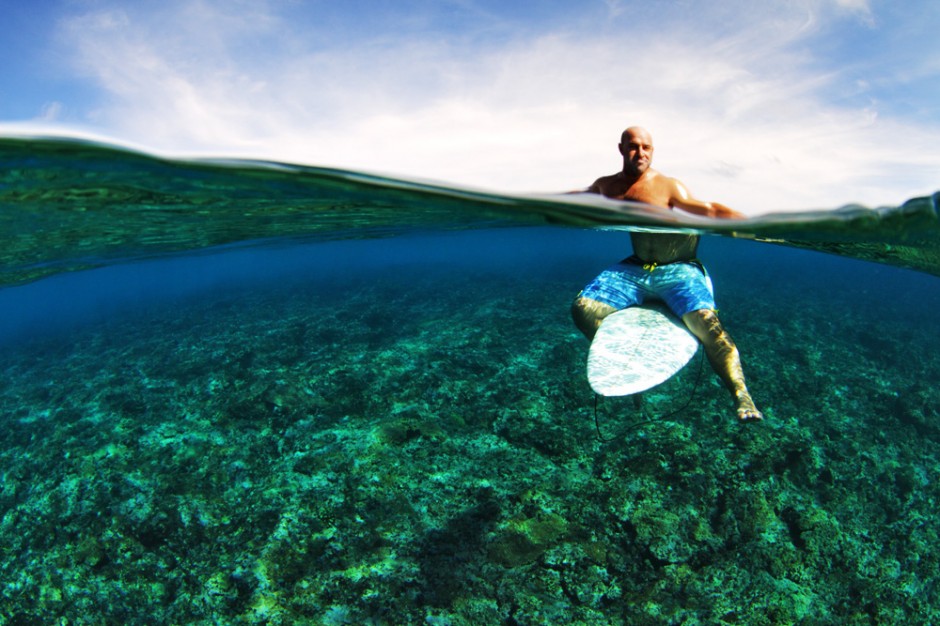 Paul and I enjoyed a full day of rare conditions at this fickle wave, the only people for miles around. It was truly a magical experience for me, and you can see from the expression on Paul's face, as he waits for the next wave, that he was pretty happy too. I will never forget that solitude -- and the incredible water clarity! 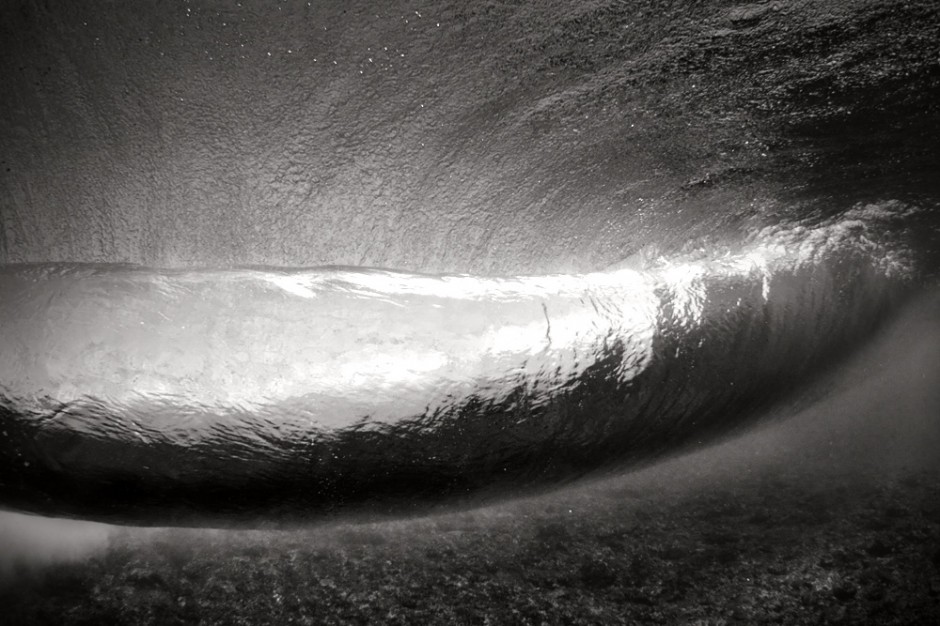 Curves in all the right places

I tend to favor the simplicity of black and white when transmitting shape and texture, and this flawless barrel lent itself perfectly to the medium. 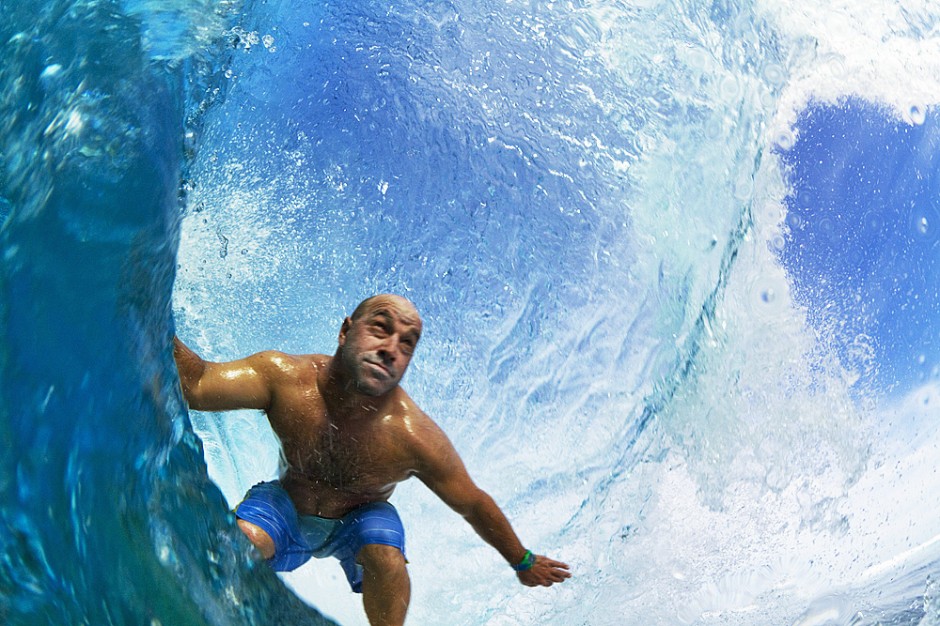 The wave is shallow, powerful, and certainly for advanced surfers or pros only. The feeling of isolation right out in the middle of the ocean is palpable -- you're a long way from a hospital if something goes wrong. Paul's a seasoned surfer and remarked to me how the power of the waves had taken even him by surprise. Here, you can see the commitment to make it out of the tube written across his face. 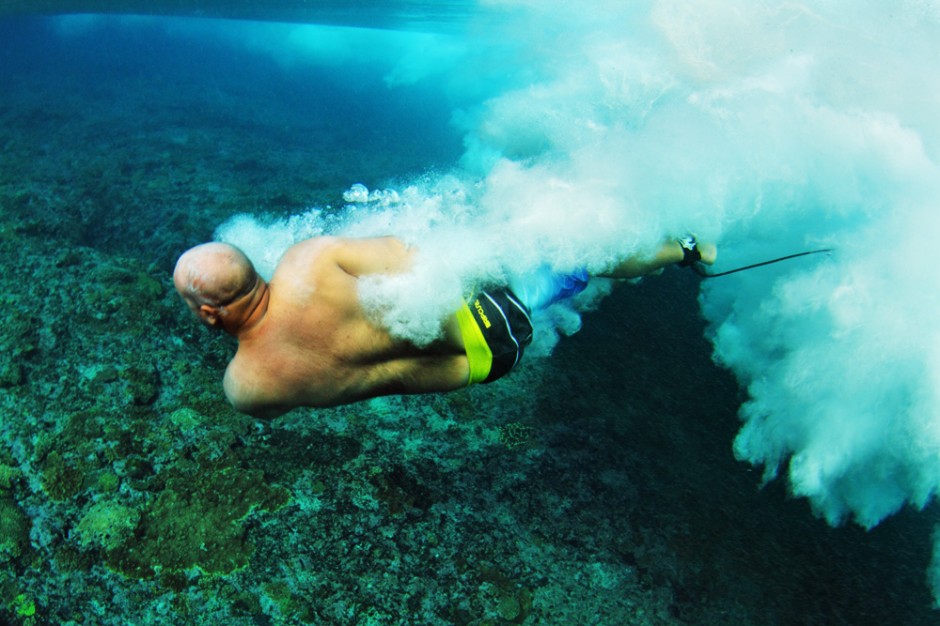 I mentioned above that you didn't want to fall off -- this picture gives you some idea why. Live coral gives a nasty cut that needs to be treated immediately to avert potential blood poisoning. Here, Paul is ejecting just inches above the coral. Luckily he came away unscathed -- unlike myself when I got a couple of little nicks earlier in the session. Fortunately they were only small, but they took a good couple of weeks to heal. Another thing to keep in mind is the powerful sun. You can see that despite Paul applying copious amounts of sunscreen, he still got a little burnt. Always put lots of high-factor sunscreen on and drink plenty of water before going out. 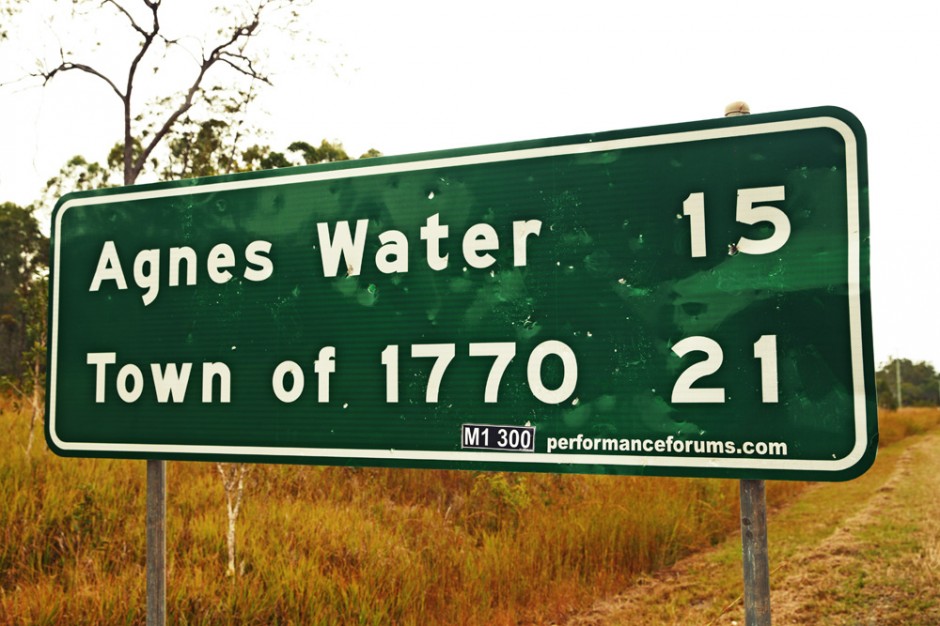 Captain Cook's first landing in what is now the state of Queensland happened on the 24th May 1770. The place was originally known as Round Hill but, in 1970, to commemorate the bicentennial of Lieutenant James Cook's landing, the name of the local village was changed to 1770. I was intrigued by this, particularly the fact that it's the only village (or town or city, for that matter) that I know of with a numeric title. Sadly someone, possibly the local council, seems to be removing all the signs saying "1770" and replacing them with "Seventeen Seventy." This is one of the very few remaining signs and doubtless will be gone shortly, which is a shame as the name in numbers is one of the things that makes it unique. 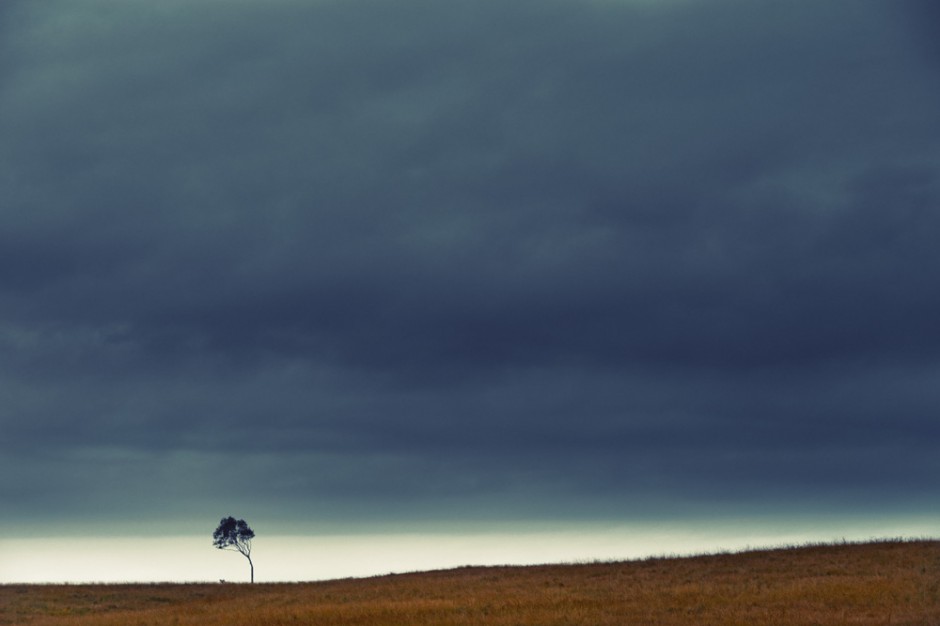 As I drove back down the coast, the bush once again opened up to reveal the familiar umber and ochre grasses, except the mood had changed and a lone tree set against leaden skies lent a sombre feel. The scene was emotive, and I was suddenly overcome by the sense of what it must've been like to be my ancestors, so far from their native Scotland, trying to make their way in this vast, unfamiliar, and unforgiving land. 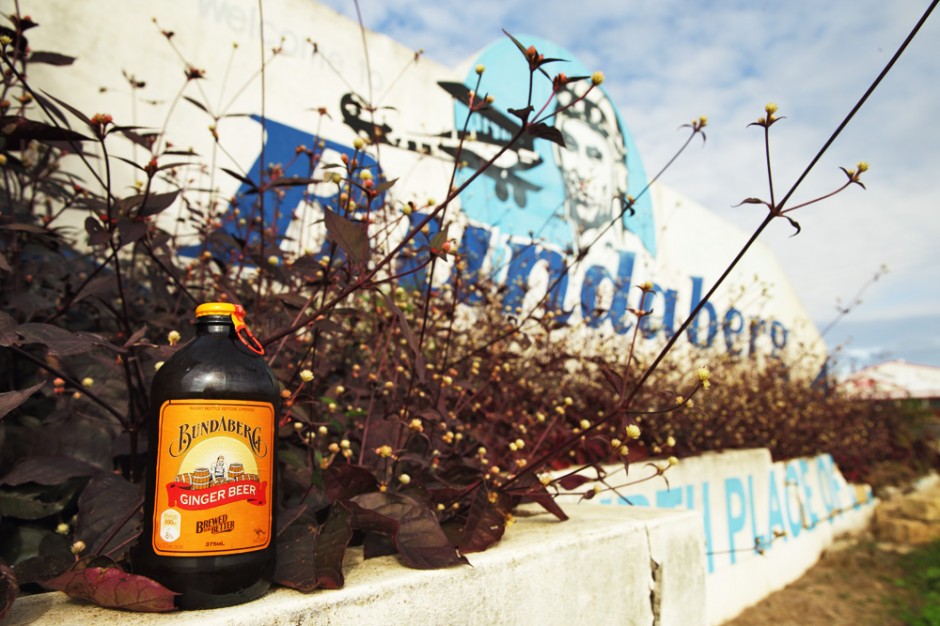 For this ginger beer fanatic, no trip up the coast would've been complete without a stop in Bundaberg, home of arguably the world's finest commercially produced ginger beer. I photographed this bottle on the characterful old sign proclaiming Bundaberg to be the birthplace of the famous aviator and pioneer, the "Australian Lone Eagle," Bert Hinkler.

This post is proudly produced in partnership with Tourism Queensland.
Tagged
Travel Queensland: Adventure in the Sunshine State
What did you think of this story?
Meh
Good
Awesome
✖
travelstoke
Download the mobile app
stoked by