World records. What are they good for? Absolutely nothing, except this one.

You can score free booze and participate in the most-important world event until Donald Trump’s inauguration next year, as Breckenridge, Colorado attempts to break the only world record that really matters, World’s Longest Shot Ski.

The record books will be rewritten during Ullr Fest, Breckenridge’s annual appeasement of Ullr, the ever-vengeful, ever-smiteful, ever-withholding Norse god of snow (or skiing? or hunting? or bowstrings? — it’s unclear). I have it on good authority (History Channel’s Vikings) that many souls will be ceremoniously and quite gruesomely sacrificed during the four-day festival in exchange for Ullr’s continued blessing of winter snowfall. Also, there will be a talent show.

Some 888 people are needed on Main Street, Breckenridge this Thursday, January 14, 2016 at 4:15pm in order to gloriously shatter last year’s record. So, yeah, looks like it’s a start-drinking-at-lunch kind of day. 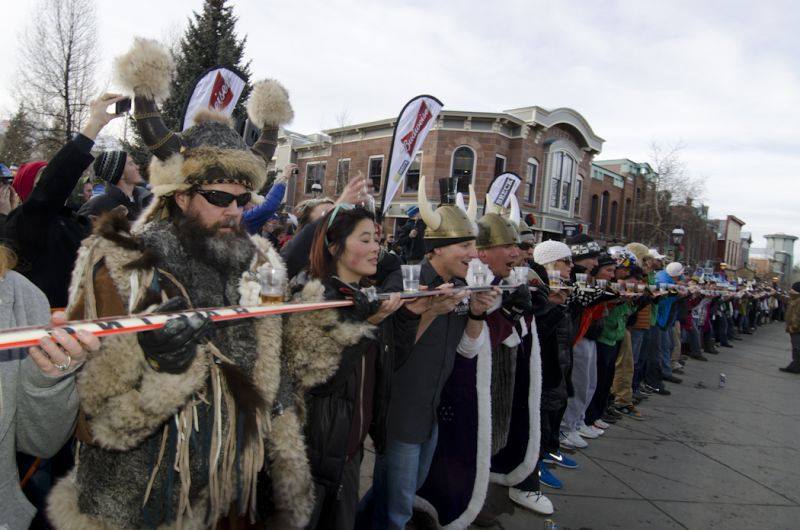 Never shot skied before? Nare ye worry; there will be experienced shot skiers on-hand ready to instruct you on the finer points of this delicate dance, including holding the shot ski, lifting the shot ski and drinking from the shot ski. It’s essentially a massive team-building exercise, only it’s done at the behest of an angry, pelt-covered Norse god.

No word on what the hooch of choice will be, but my guess is mead…or Pappy Van Winkle’s.

Tagged
Events News
What did you think of this story?
Meh
Good
Awesome

The 11 Sexiest Live Shows Las Vegas Has To Offer
Every Roller Coaster at Cedar Point, Ranked
5 Must-Visit Music Venues Off Nashville’s Main Drag
You Can Take an Easy Day Trip To the Bahamas on This Florida Ferry
Patagonia Baggies Review: I Finally Tried the Cult-Favorite Shorts, and I Get the Hype.