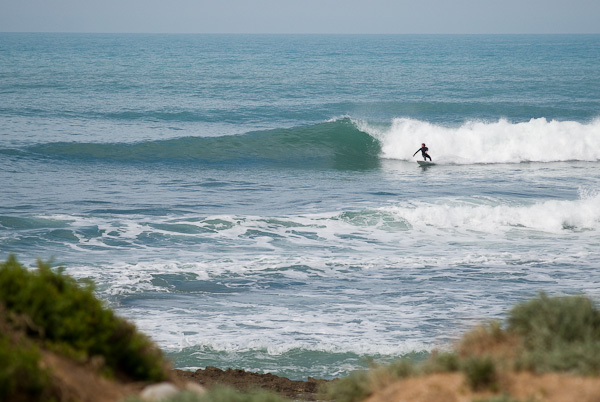 All photos: Author
The small town of Taghazoute is surfing ground zero in Morocco.

Taghazoute is 45 minutes from Agadir’s international airport and home to the famous righthand point breaks of Anchors and Killers that come alive in the winter months.

It’s not the prettiest of towns with its surf ghetto vibe, but it does offer accommodation for all budgets: from small, bare rooms for $10/night to luxury apartments with pools.

Many people choose to stay with one of the numerous surf camps in the area that offer accommodation, meals, and transport to the surf. Prices start at around $300 with surfboard hire and lessons extra.

You can walk to most of the surf breaks around Taghazoute, but the you’ll be sharing the waves with a crowd. Renting a car with a few friends opens up miles of coastline, much of it rarely surfed. 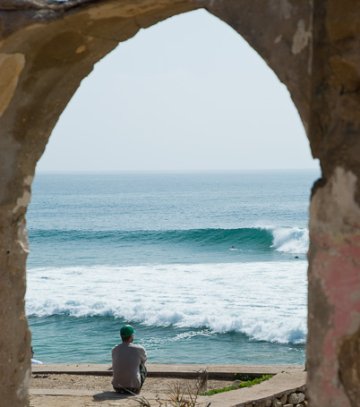 The area around Cap Rihr, 30 minutes north of Taghazoute, has a variety of reefs for experienced surfers.

For a day trip, try Imessouane, a small fishing village home to a long righthander. Or to the south, the former Spanish outpost of Sidi Ifni has a fun beach break in small swells.

The roads between Moroccan towns are mostly good and traffic outside the big cities is relatively light. Just keep an eye out for the occasional mountain goat, donkey, or camel.

And whatever you do, don’t drive at night. Potholes, livestock, and erratic drivers make it a risky proposition.

After a long day of surfing, there’s no better feeling than tucking into fresh and tasty Moroccan cuisine.

The country’s most recognizable dish has to be the tagine, where meat (usually lamb, chicken, or fish) and vegetables are cooked for a couple hours in a clay pot. Follow the locals and eat it with your hands, using big chunks of Moroccan flat bread to mop up the gravy.

Kefta brochettes (spicy minced meat formed over metal skewers) are also a great option and are available from food carts and restaurants.

The seafood in Morocco is fresh and very cheap. For a post-surf snack you can pick up a bag of steamed mussels from a local fisherman for a few dollars or dine in style at Chez Brahim on the beach at Devil’s Rock, where they do wicked fish skewers with fries and salad for $8.

After, enjoy a super-sweet mint tea or, for a less sugary beverage, try the avoca au lait — an avocado milkshake that should taste weird but is strangely delicious.

Alcohol can be scarce and expensive in Morocco. Taghazoute itself doesn’t have any bars or liquor stores and the closest nightclubs are in Agadir. Apart from the slightly cheesy British Pub (the name says it all) most Agadir nightclubs are attached to luxury hotels and charge practically London or New York prices for entry and drinks.

An alternative is to stock up at a supermarket (look for the Marjane sign) and have a party in your apartment or hostel. Budget about $1 per small can of Flag Speciale beer. 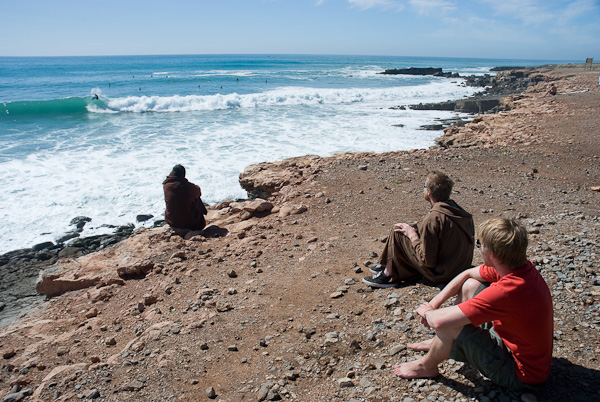 Anchor Point
Named after the now disused anchor factory on the point, this wave ranges from a gentle, peeling longboard wave when small to a world-class righthander breaking up to 15 feet in big swells.

There’s usually a crowd as Anchors is walking distance from Taghazoute, but if you get a good wave here you won’t forget it in a hurry. Entry is from the rocks on the point or around the front at Mysteries Beach.

Boilers
Another righthand point, this wave breaks close to the rocks and leaves little margin for error. Getting in and out of the water is best done beside the submerged ship’s boiler. The wave is a fast, high performance wall with the occasional barrel. Just don’t get stuck behind the section or you may find yourself between a rock and a hard place, literally.

Imessouane
Swells break down a long, perfectly groomed sandbar in the middle of the bay. Surfers from the various surf camps and guesthouses convene en masse to surf it the few hours either side of low tide. Consequently, it can be a busy break with longboarders, shortboarders, wave skis, and stand-up paddle boards (SUPs) all competing for the set waves.

For more waves, give Matador’s surf guides to Vietnam, Hawaii, Portugal, and Argentina a go.

If you’re just starting out, you might want to visit our “Newbie’s Guide to Surfing,” or take a look at the “World’s Best Surf Spots for Beginners.” Experts can head straight for the “Top 10 Most Dangerous Waves in the World.”

Tagged
Surfing Morocco
What did you think of this story?
Meh
Good
Awesome