I HAD THREE DAYS to explore an area of North Carolina’s Outer Banks known as the Crystal Coast. As soon as I landed at the grocery store-sized New Bern airport I knew I was in for something different. In my 72 hours I met many colorful characters, such as the slightly intoxicated Judge Douglas McCullough, who prosecuted the Panamanian Dictator Manuel Noriega. And I got to explore a wide range of scenery, from fishing the slow-moving waters of Taylor’s Creek to dancing at the Atlantic Beach Music Festival.

Note: Taylor Butz was a guest of the Crystal Coast Tourism Authority. 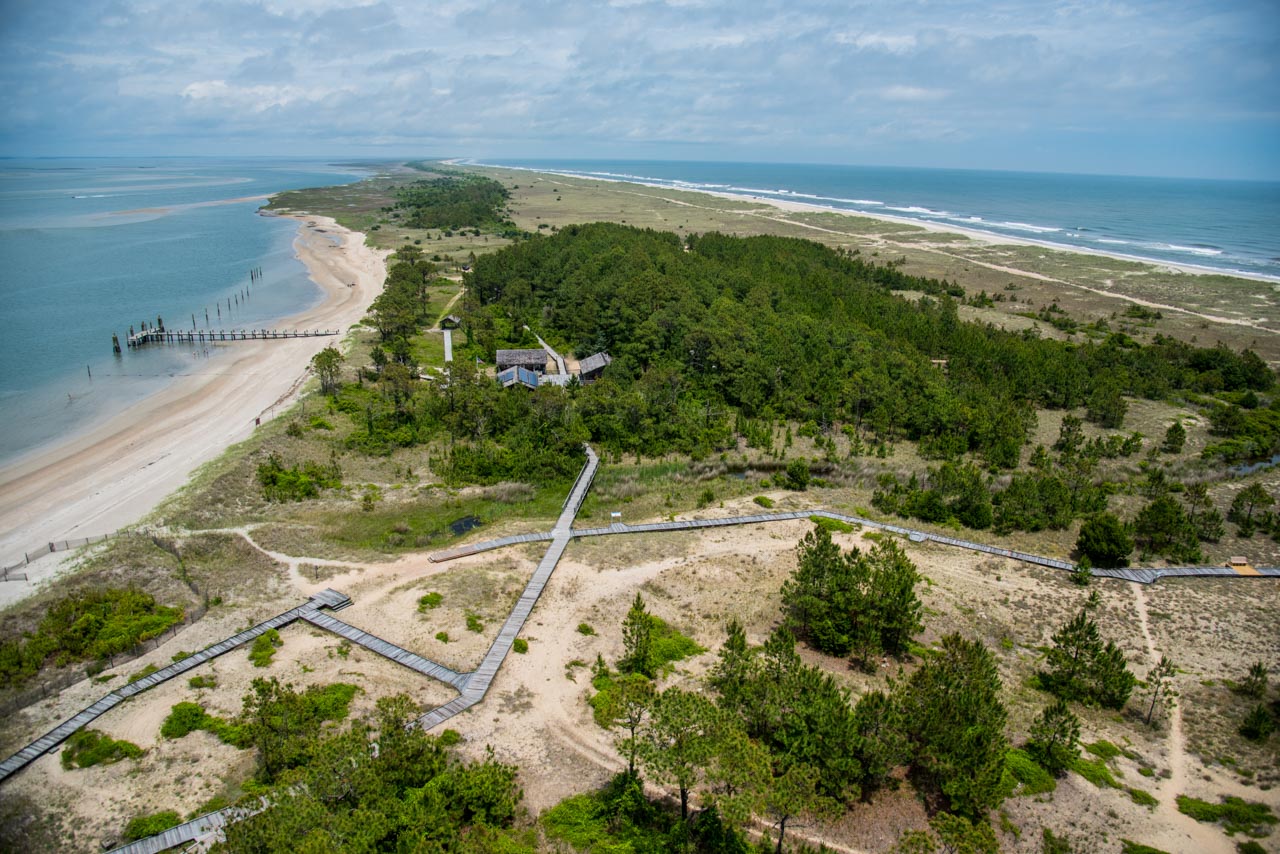 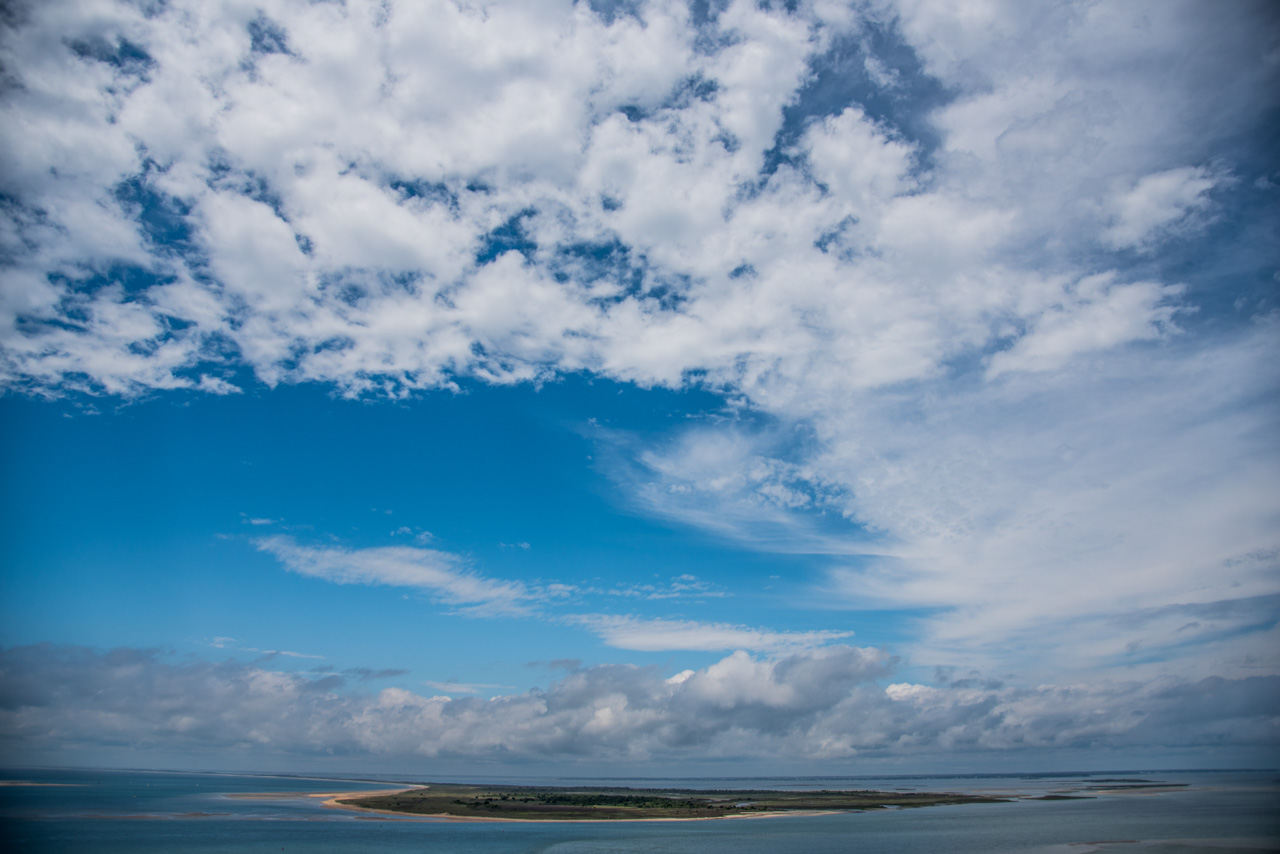 There are hundreds of constantly changing sandy islands in the bays and sounds off the Crystal Coast. The tides and currents are constantly moving and rearranging the sand upon which these islands are made of. An island that is there one year may disappear with the currents and descend back into the sea. I can only imagine how incredibly humbling a decades-long video timelapse of these islands would be. 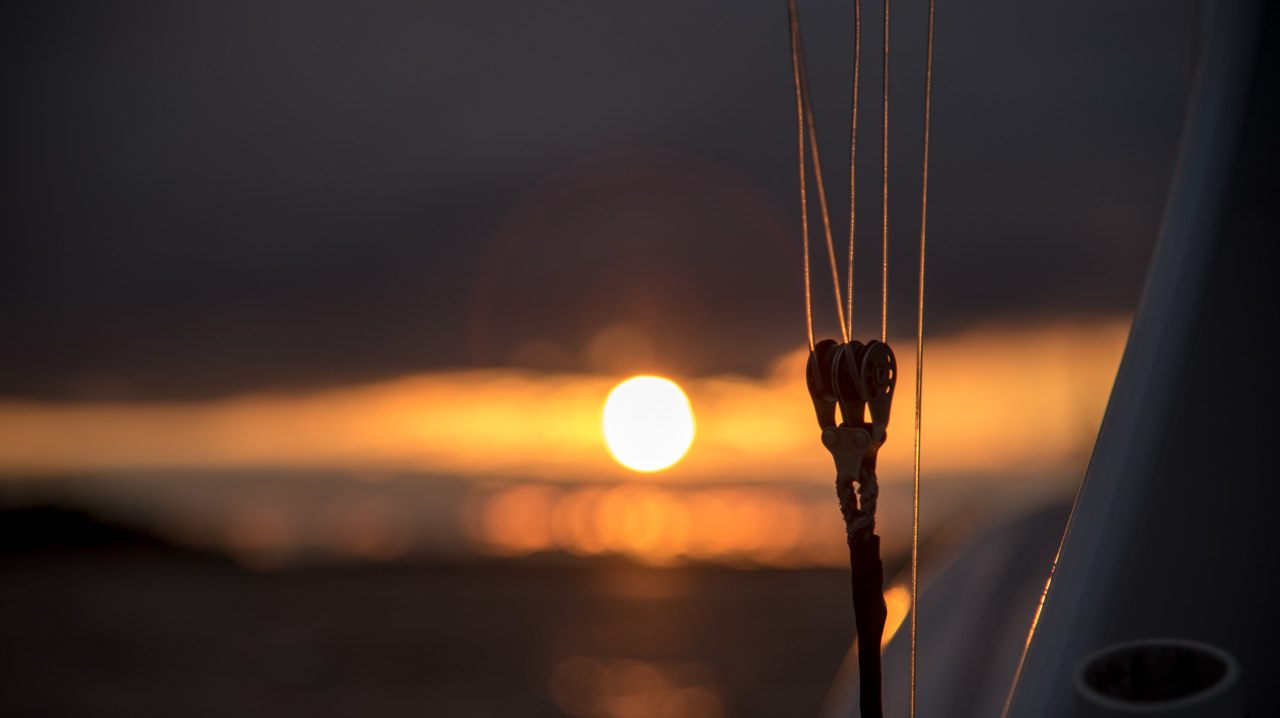 One of the most stunning aspects of the Outer Banks is that due to its geographic location you can watch both sunrise and sunset. As this golden sunset transitioned into a pleasant night, my 72 hours in OBX came to a close. From deep history to remarkable natural areas, the entire Crystal Coast really impressed me. But what I found most amazing was the friendliness and passion for the area displayed by the locals. I felt as if the entire time I spent on the Crystal Coast was like spending a weekend at a friend's house. 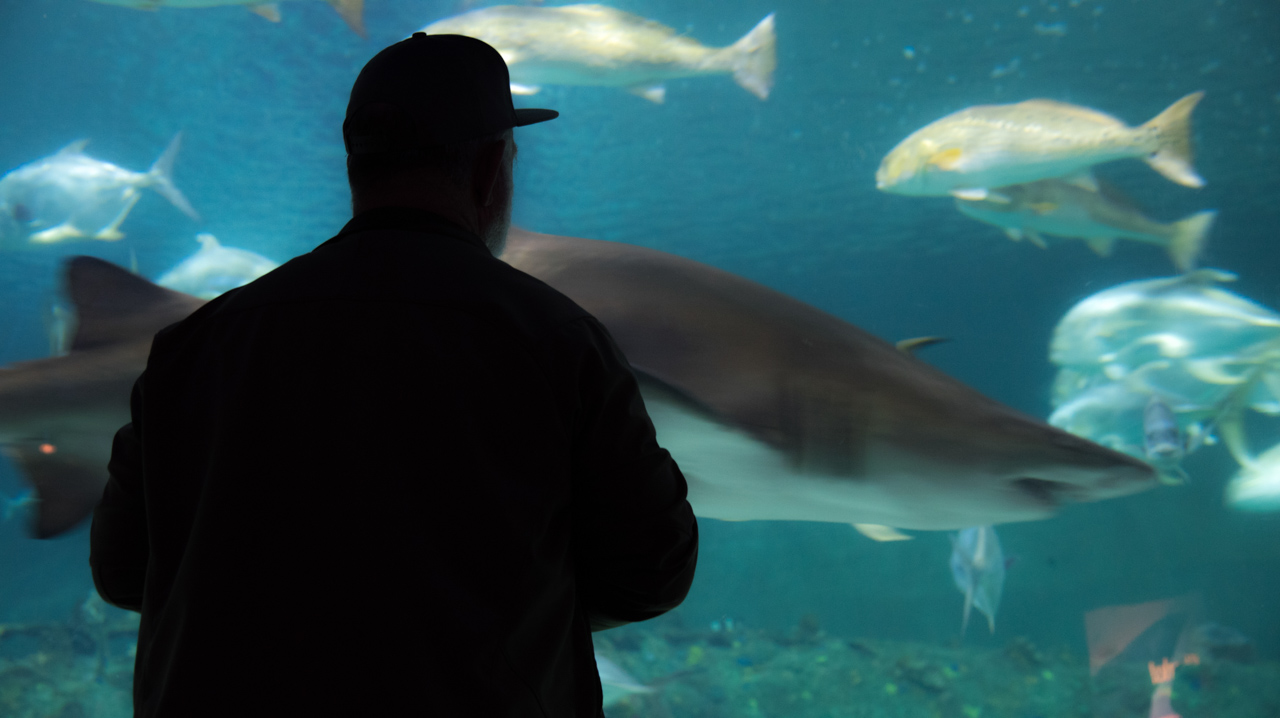 A man stands calmly on the other side of the glass from this sand tiger shark at the Pine Knoll Shores Aquarium. The aquarium has a 306,000-lb. water tank with a U-352 submarine replica sunk into its depths in which sand tiger sharks, nurse sharks, and a variety of fish swim freely. 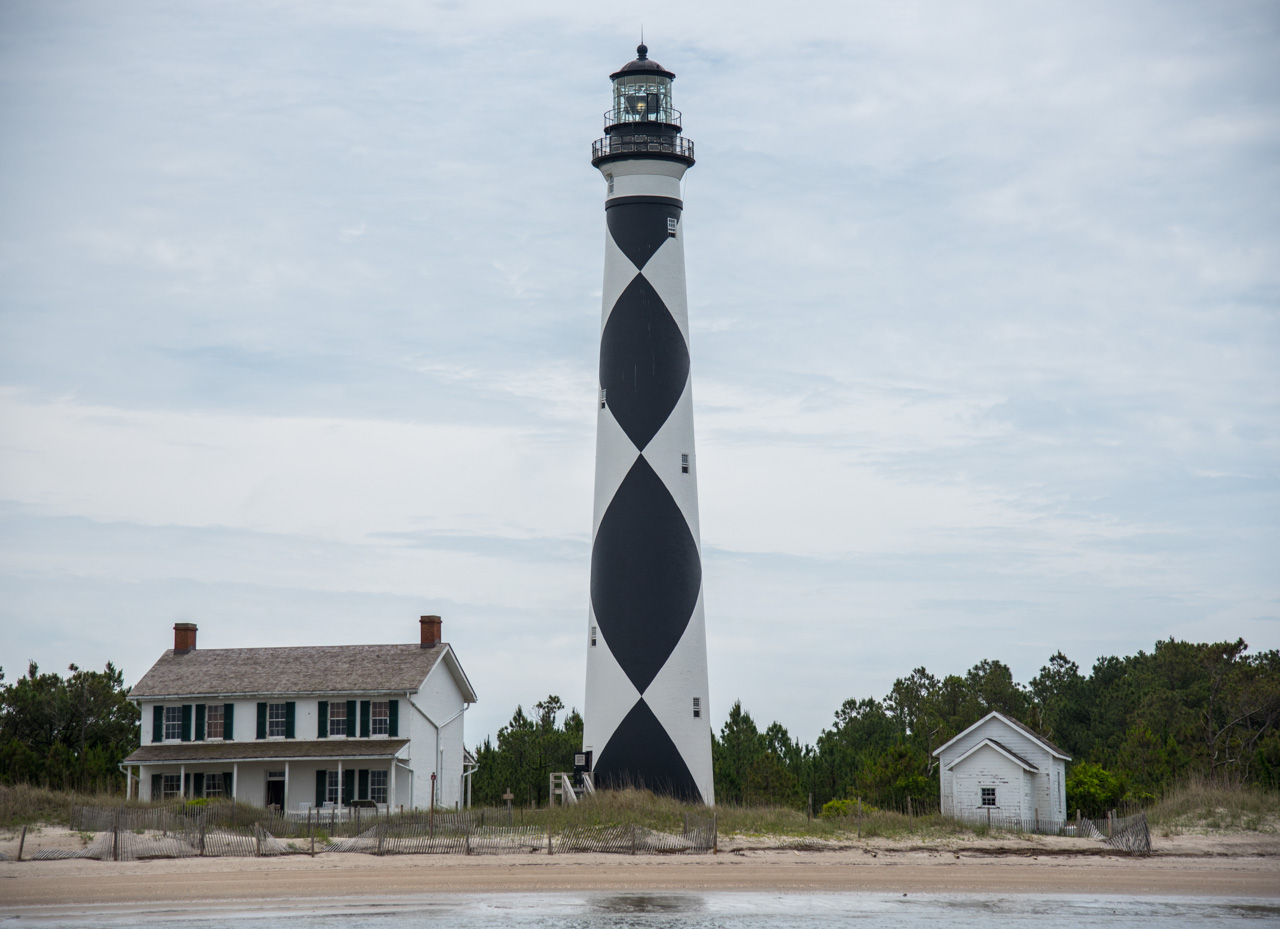 This 163-foot lighthouse was completed on November 1, 1859, but its lights were turned off soon after. In 1861, after North Carolina joined the Confederacy, it was decided that the lenses should be removed from the lighthouse to make it more daunting for Union ships to navigate the Outer Banks' coastline. After the Union captured the nearby towns of Morehead City and Beaufort they overtook the lighthouse and allowed its beacon to once again aid coastal sailors. 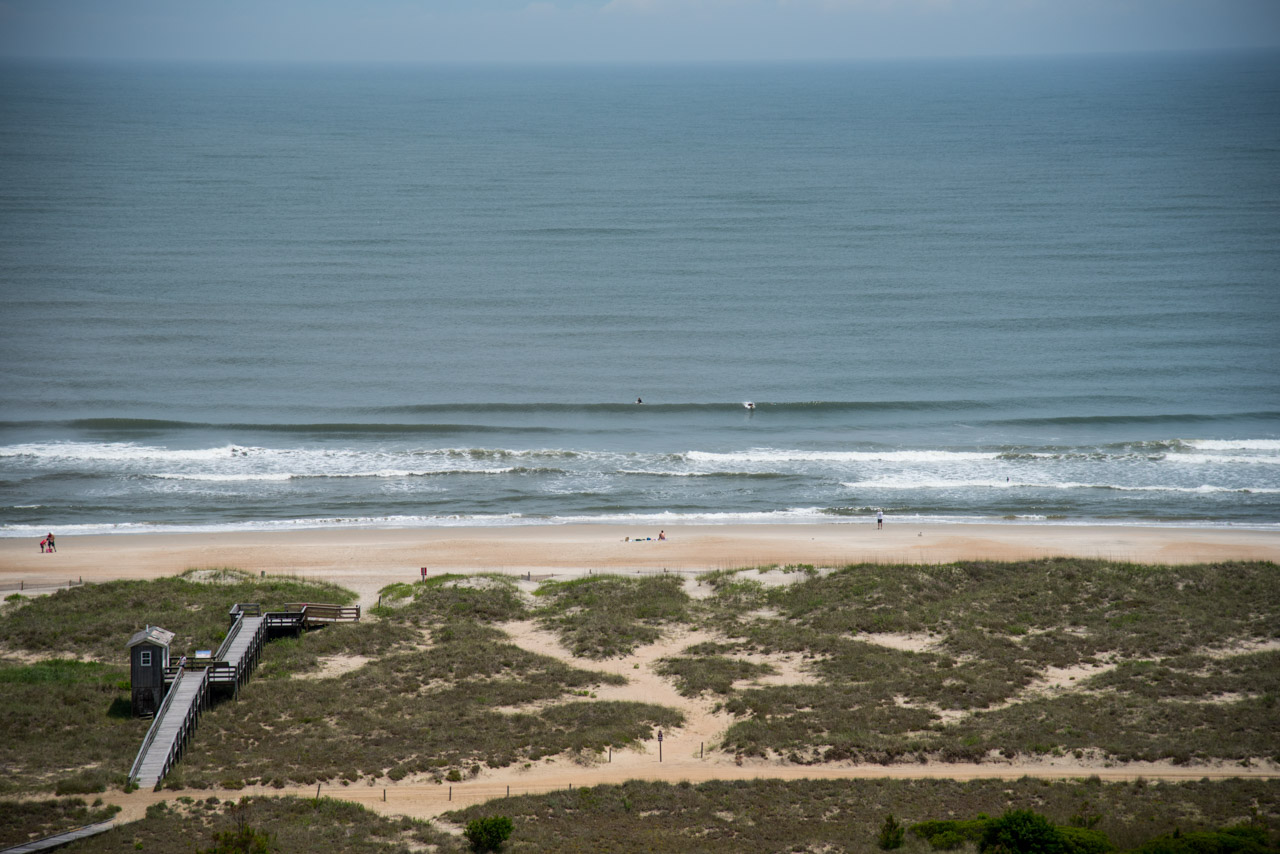 OBX has some of the best surf breaks on the Atlantic Coast. Throughout the first 24 hours of the trip there wasn't enough swell to surf, but once I reached the top of the Cape Lookout Lighthouse I saw some perfect chest-high sets come through. 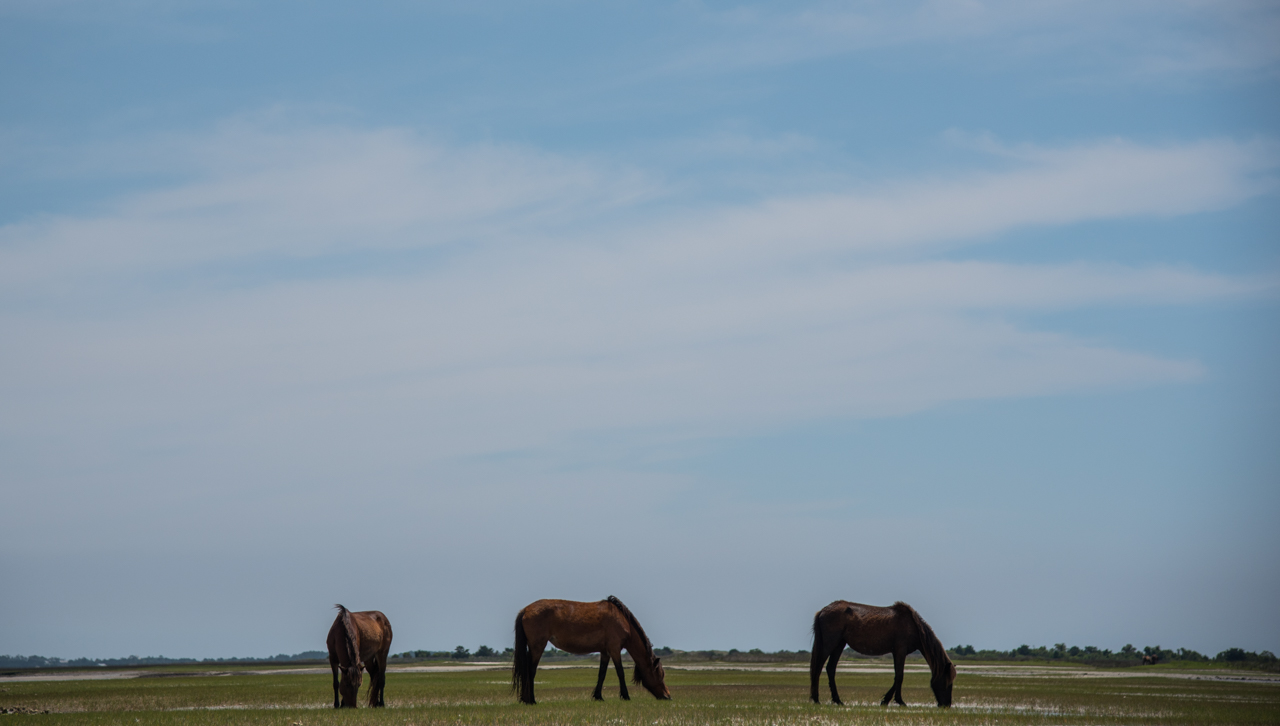 Wild horses can be seen galloping along the shorelines all over the Outer Banks. The history of how they got to the barrier islands is unknown. One theory suggests that they were onboard the eight Spanish galleon ships that sank off the coast of North Carolina in the 1500s. It is believed the horses swam safely to shore and began to populate the Outer Banks throughout the next 500 years. 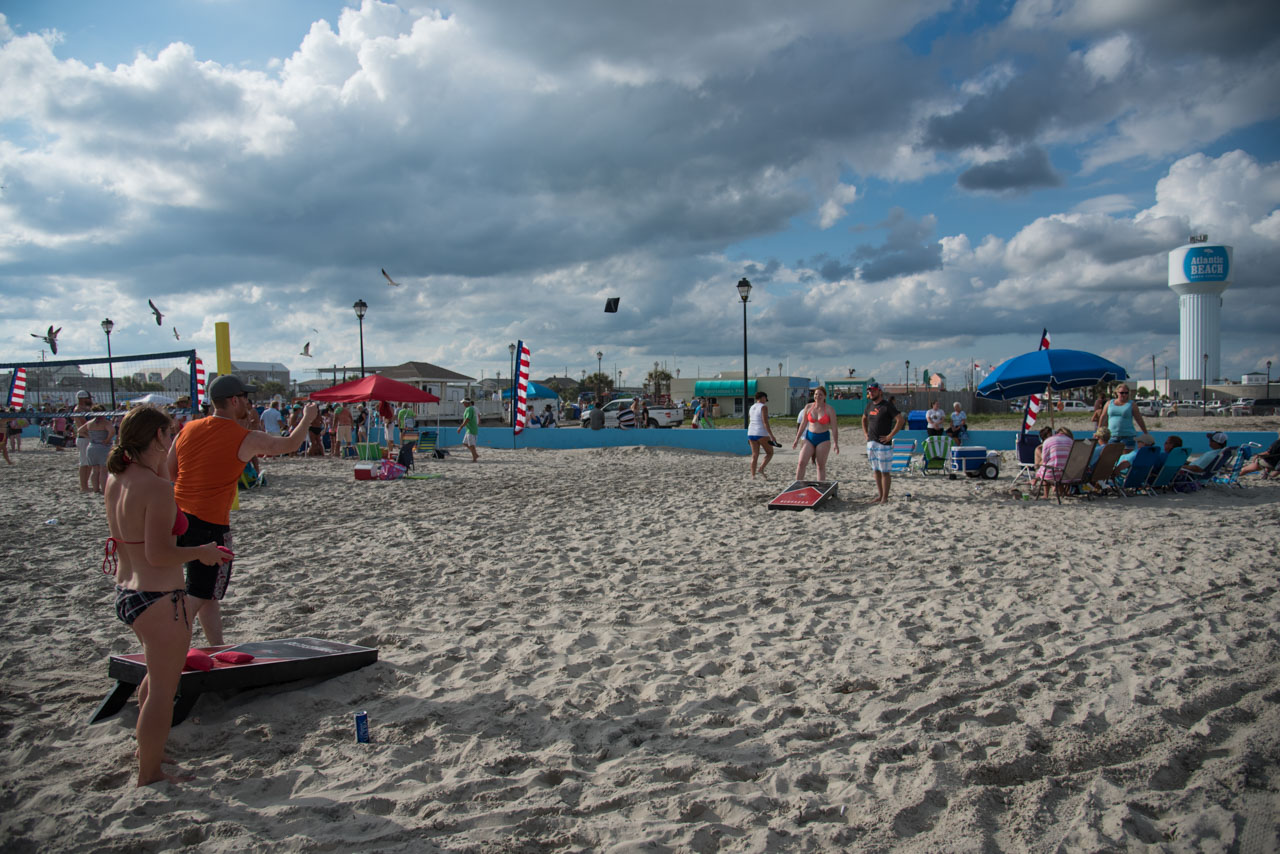 The beach scene on the Crystal Coast was vibrant and alive when I was there, even though threatening clouds passed overhead. These folks were enjoying a game of Cornhole. The game consists of tossing bean bags at a board with a circular hole carved into the top. If the bean bag lands in the hole you get 3 points, if it lands on the board you get 1 point, and the first team to 21 points wins. 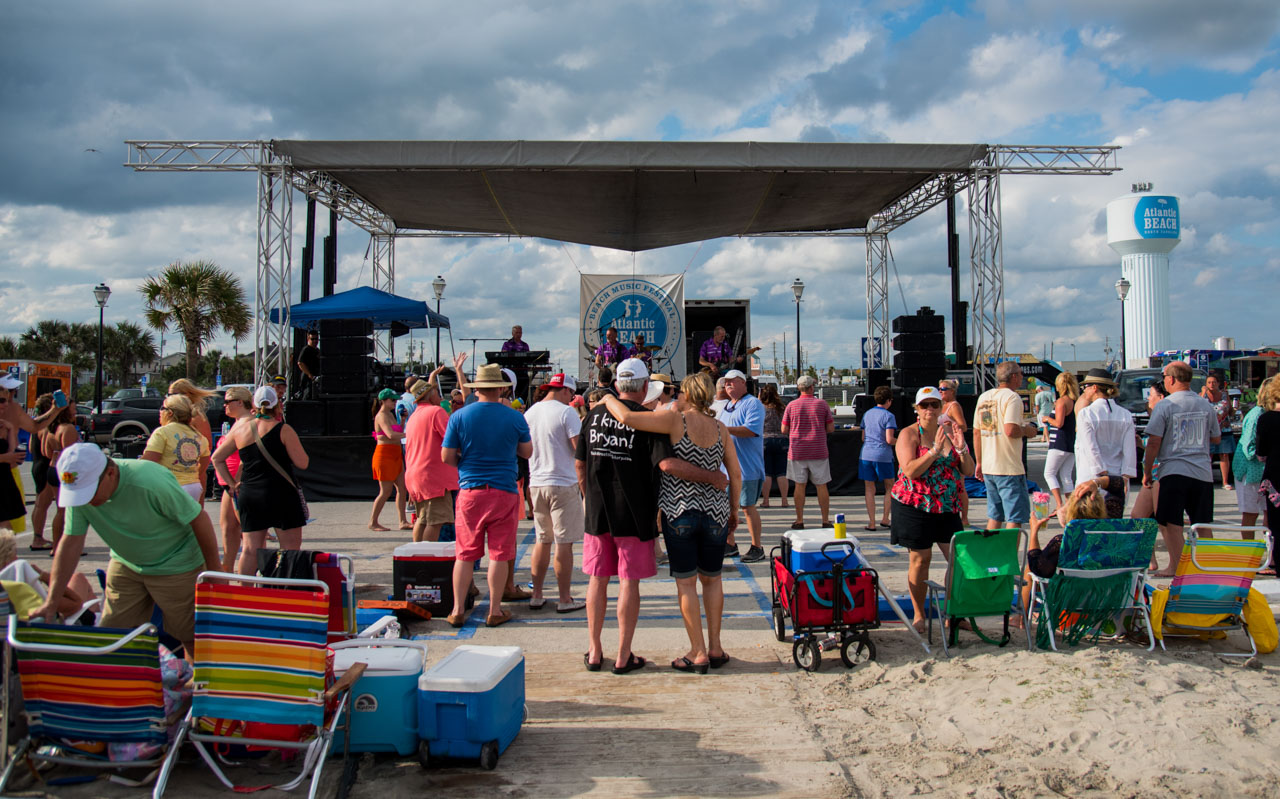 The third annual Atlantic Beach Music Festival was in full swing during the weekend. It was a great beachside party with rocking jams, fun games and plenty of beer. The couple in the center of this photo were taking a calm moment to observe the colorful and inebriated scene unfolding around them. 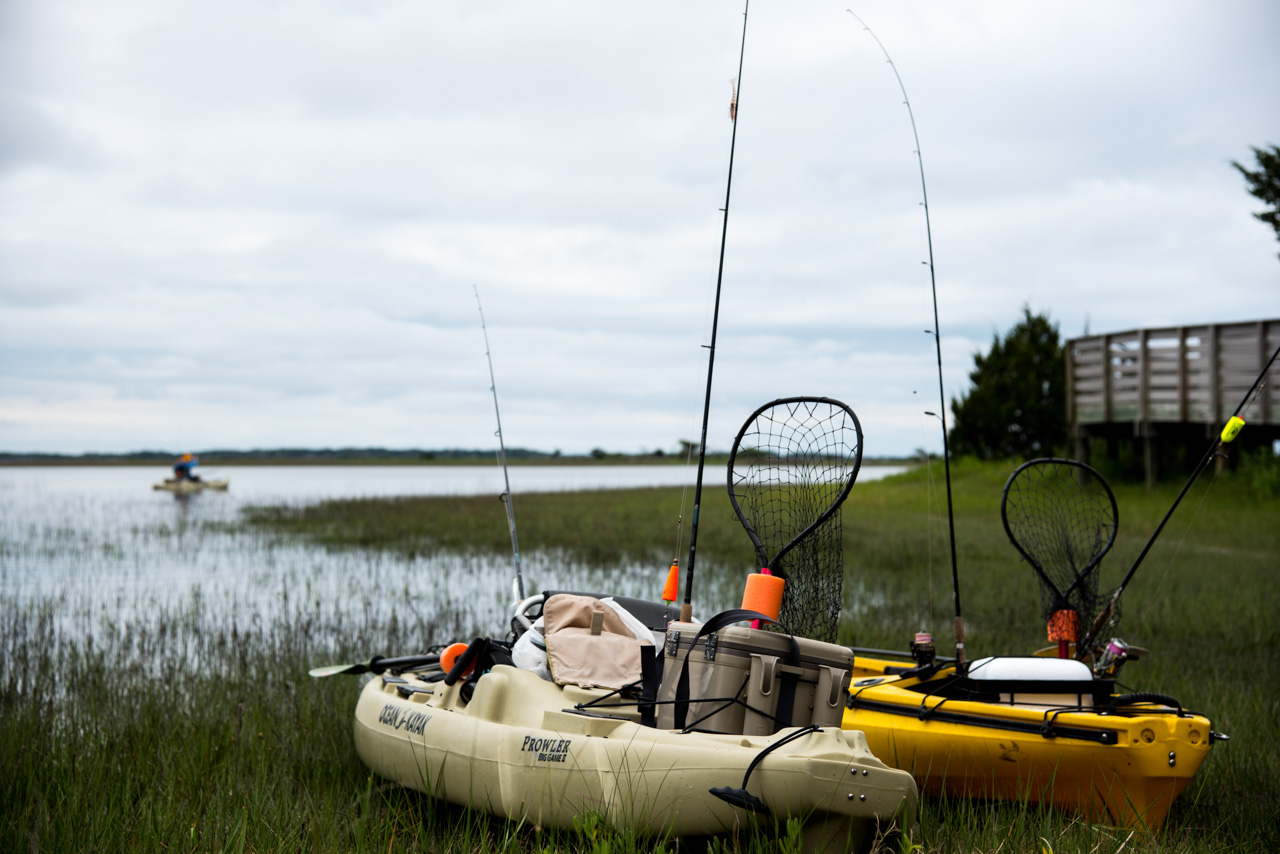 The waters of the Crystal Coast are rich fisheries. A popular way to fish the labyrinths of oyster beds, creeks and rivers is from a kayak. The small draft of the kayak allows one to navigate over extremely shallow waters. 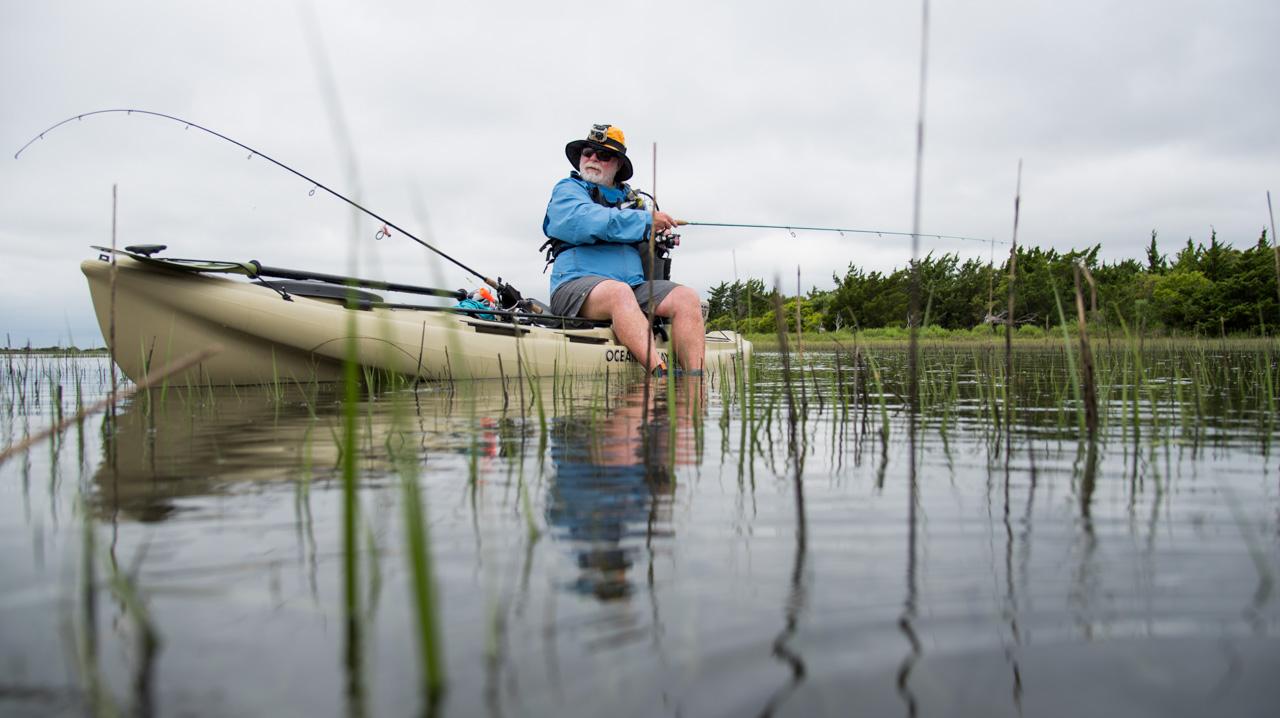 This fisherman has multiple lines set up in hopes of snagging a Red drum fish (or Red). We continued exploring and fishing the scenic creekbeds but had no luck catching a Red fish. I did end up catching a speckled trout, which we took to a local restaurant and had served up on some zesty fish tacos. 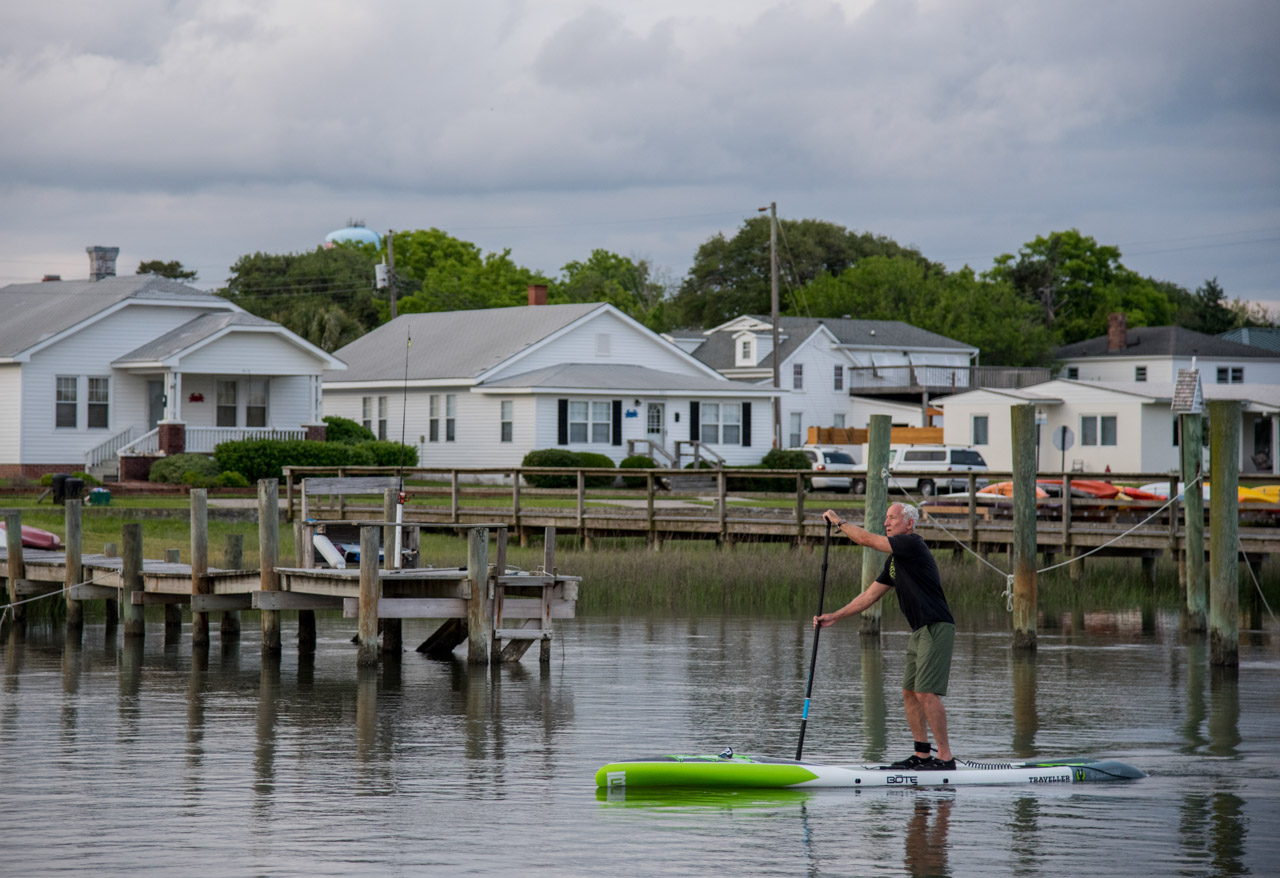 The calm and glassy waters around the city of Beaufort are a perfect place to stand-up paddleboard. The restaurants and bars along the Beaufort waterfront have docks for paddleboarders and kayakers to park their gear and refuel after a morning spent on the water. We met a local woman who had paddled 28 miles into town on her SUP. She definitely deserved a cold beer. 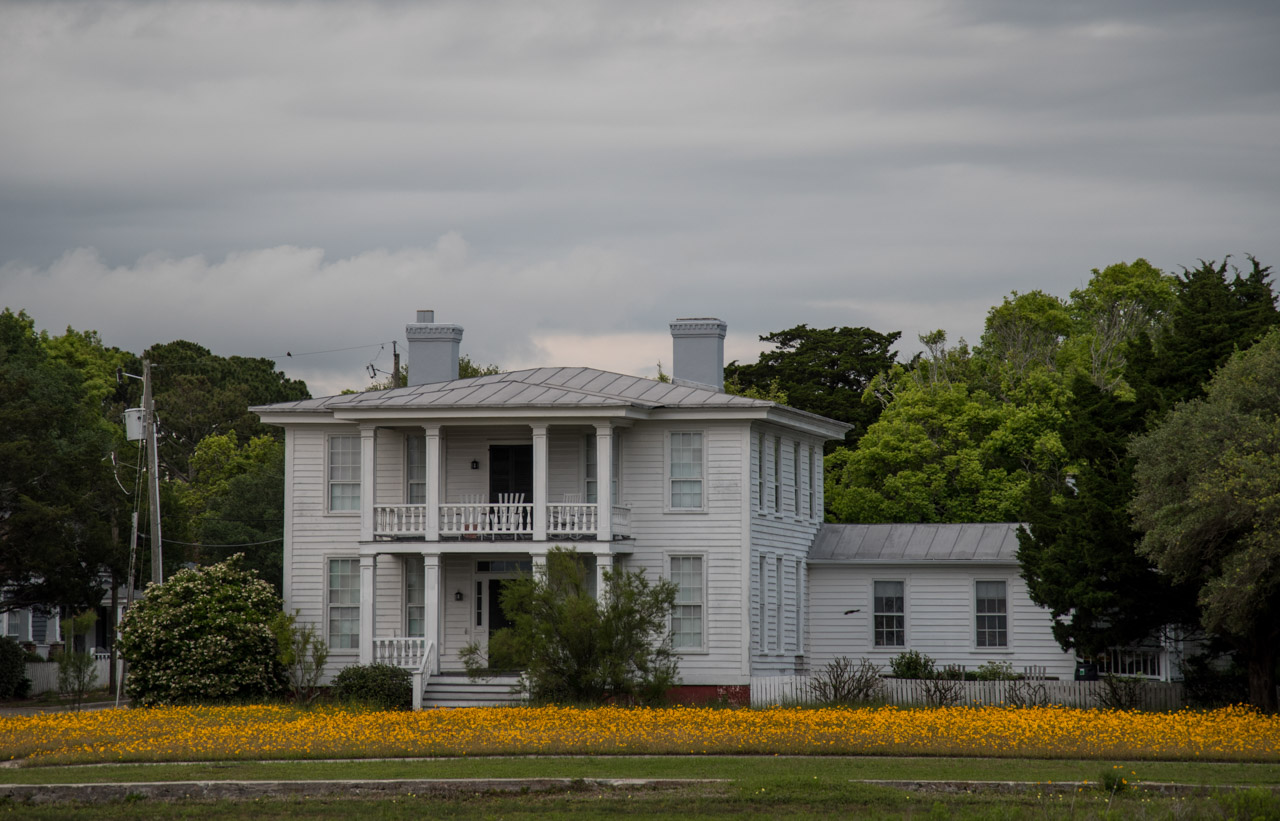 The town of Beaufort, North Carolina has a long and colorful history. The oldest house I found was erected in 1762 and many of the other houses were built in the mid-1800s. With flooding and hurricanes real threats to the area, it’s a testament to construction and human ingenuity that these estates have stood strong through tumultuous times. 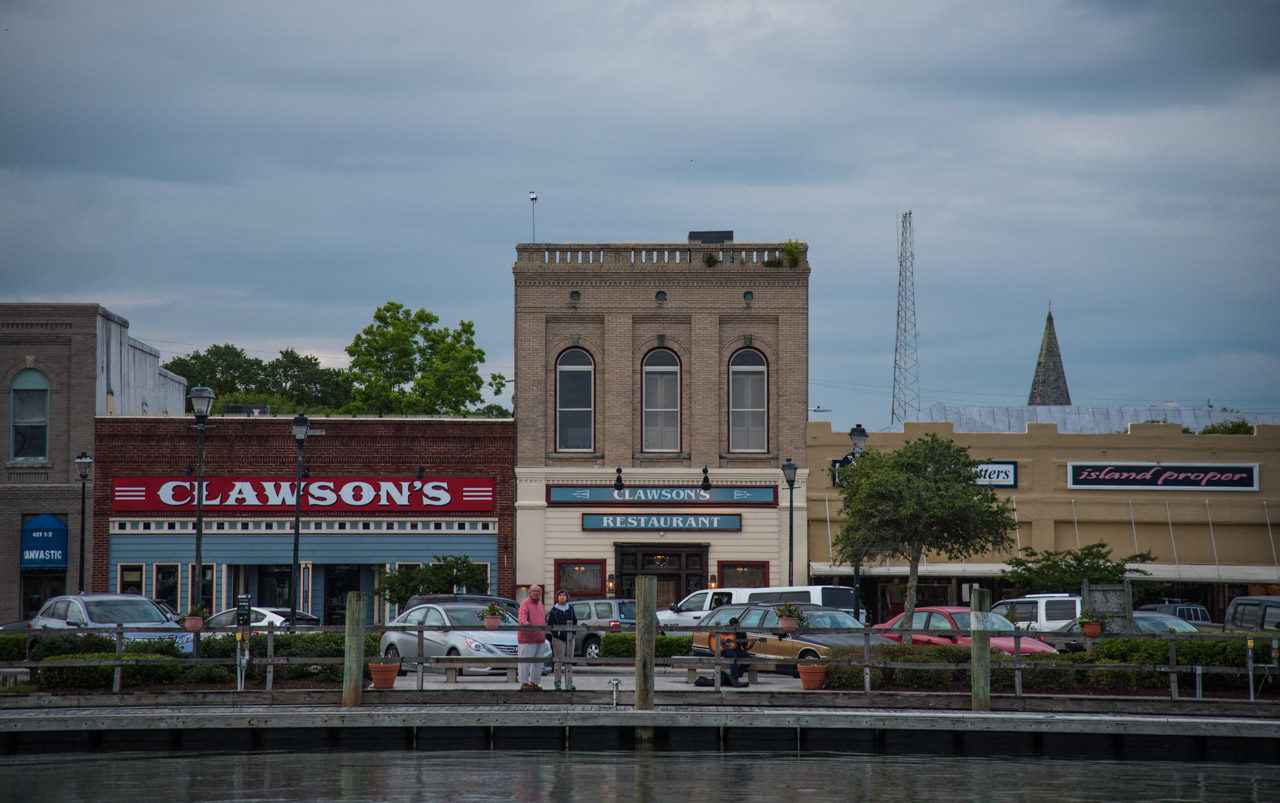 The town of Beaufort was established in 1703 and is the third oldest town in North Carolina. This shot of downtown was taken from a fishing boat that we chartered in the evening. Luckily, our fishing vessel did not have the same destiny as Blackbeard’s Pirates ship the “Queen Anne’s Revenge,” which ran aground just outside of Beaufort in 1718.