I gave up seeking meaning or reason in travel long ago — work, play, adventure, hardship, escape, the sacred, the divine, enlightenment, hedonism, the profane…most good trips are a mix of all of these.

That said, in our digital world we are so often chasing deadlines, schedules, money — our tails — that spending time away from the objects of our technological obsession becomes more and more mandatory for me. Two weeks out of touch and long gone on Fraser Island was just what the doctor ordered after a long winter on the road but never really away.

Cody’s visit to Fraser Island was sponsored by Tourism and Events Queensland. Learn more about Queensland on their blog. 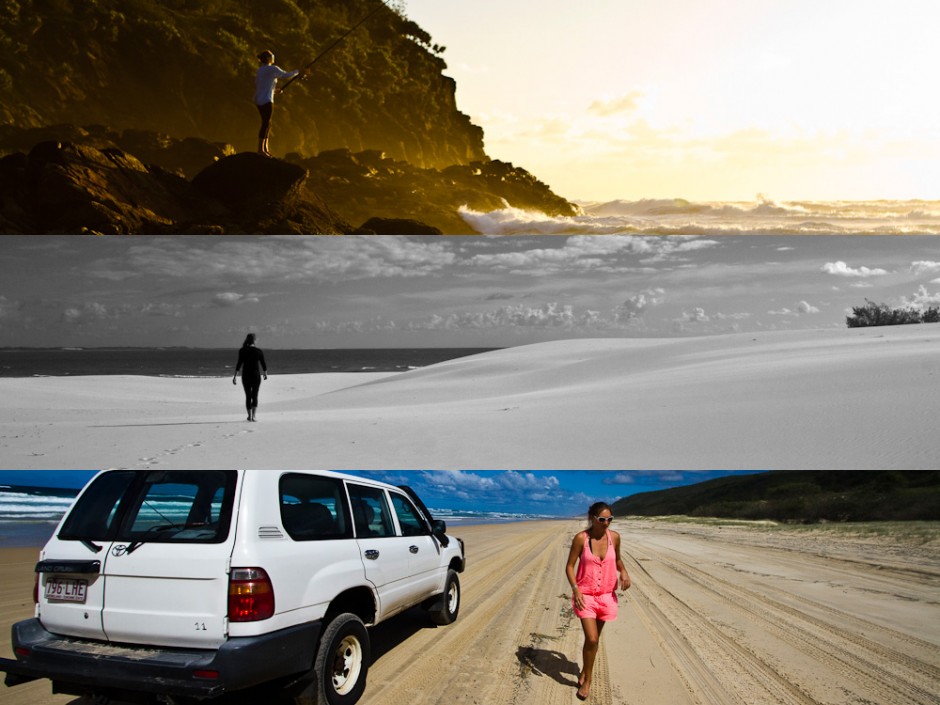 There's a rare freedom to be had when time's only meaning is the movement of a cloud's shadow or the shifting colors of sunrise over the Coral Sea. How you spend such time is an art: wandering abstract patterns in the dunes under a blazing midday sun, dropping a line off a rocky headland at sunrise, or parking the Land Cruiser in the middle of a wide open beach just to watch the clouds roll by. The Japanese use the word shibumi to describe the pursuit of effortless perfection in how you spend your time. On Fraser Island, we just called it cruising. 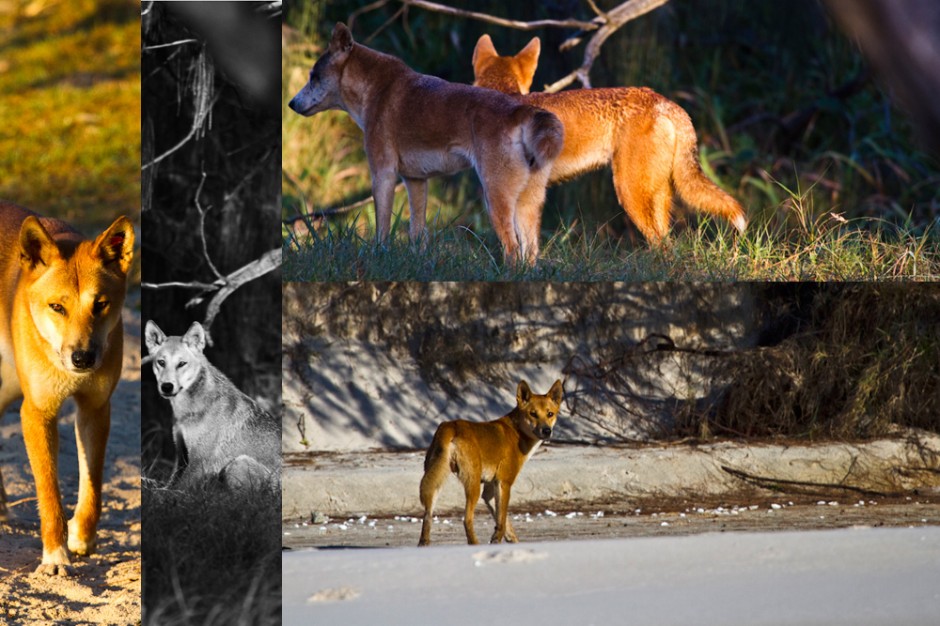 The dingoes, Canis lupus dingo, on Fraser Island are considered one of the purest strains left in Australia due to the population on the island being big enough to avoid inbreeding and isolated enough to prevent crossbreeding. The Fraser Island dingo is revered, protected, and feared in equal measures. Available data suggests that there are 25-30 packs on Fraser, containing between three and 12 individuals. Contact with humans is inevitable, and there are reported dingo attacks almost every year…many due to irresponsible behavior by a few of the island's 400,000 yearly visitors. 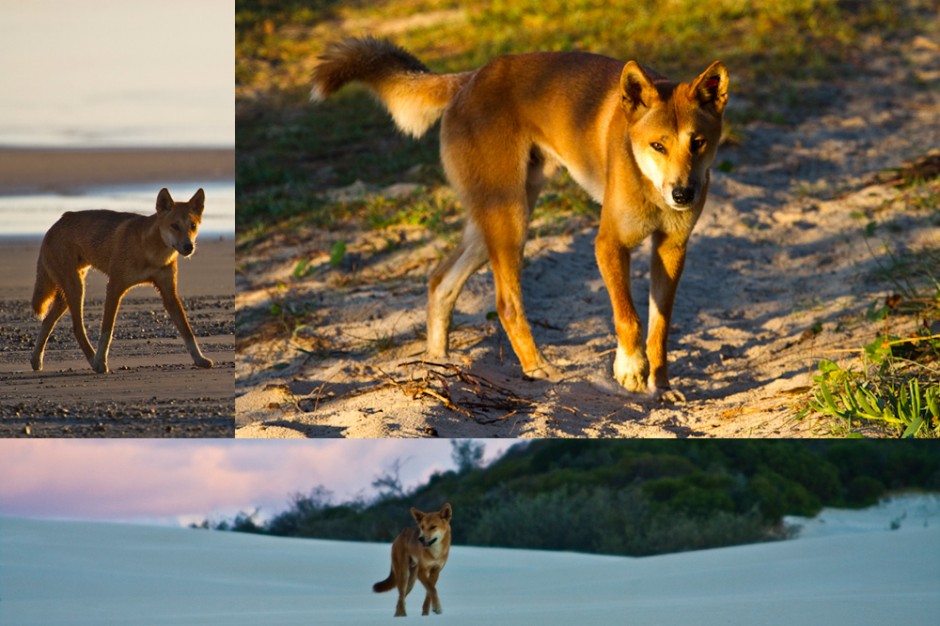 Upon arrival, every visitor to Fraser Island is given a flyer encouraging them to “be dingo-safe!” Simple precautions such as never feeding the dingoes, securing food in campsites, disposing of trash safely and correctly so dingoes don’t associate people with an easy meal, and keeping children under close supervision all lead to less human-dingo interaction, a positive for both species. Feeding dingoes directly or indirectly is by far the greatest issue facing the Fraser Island dingo population, as it causes dingoes to lose their hunting skills and their natural fear of people, which can then lead to aggressive and dangerous behavior. 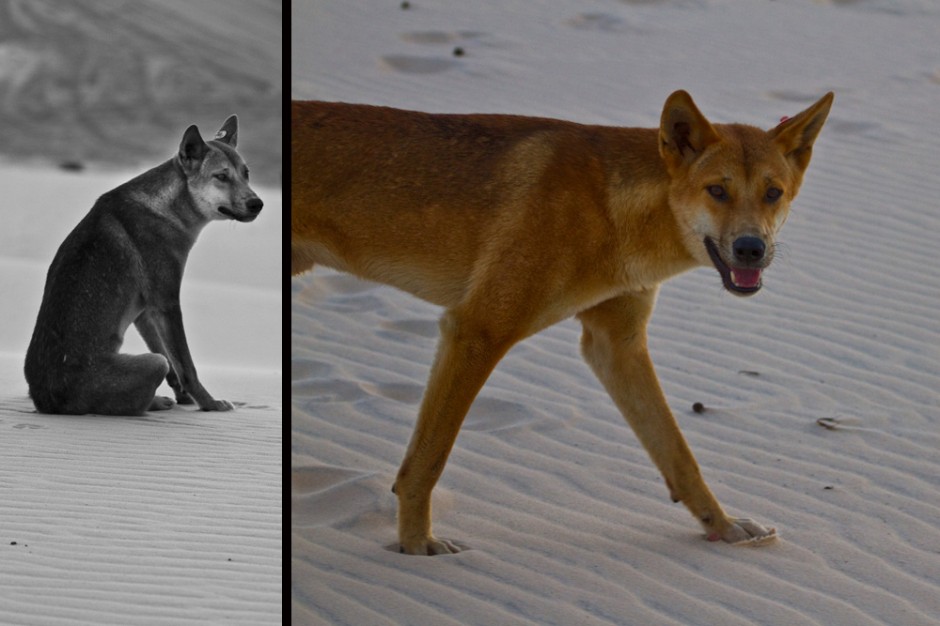 After all the warnings and signs, our encounters with the local dingoes on their turf proved to be a highlight of the trip. As a photographer, I always hope to see and capture intimate moments with native wildlife, but understand the thin line you have to walk between getting the shot and putting yourself or the animal in danger. We were working on the Binngih sand blow just north of Waddy Point at sunset to get a few more shots of dunes before dark. I was packing up the gear when I heard my partner Katie start muttering, “Dingo…dingo.” I looked up to see her standing tall and slowly backing away from a full-size (about 2ft tall and weighing 40lbs) male dingo loping across the sand. He casually sat about 15 feet from us and glanced over for a moment, probably wondering what the hell we were doing way up on this dune, before turning towards the sea to watch the sunset and then continuing on his way. 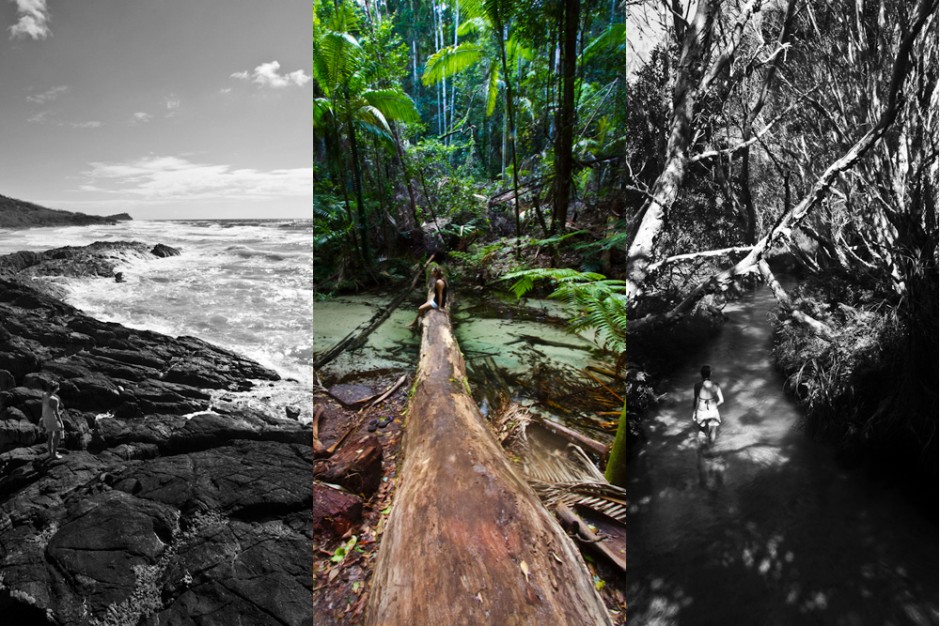 The average trip to Fraser Island is a short 2.2 days, during which most visitors blaze around the island taking in as much of the incredible scenery as possible -- there's certainly a beaten track of tour buses and ‘must-see’ locations. We were fortunate to have a solid two weeks, allowing lots of time to explore and ramble through the nooks and crannies of the island. We usually found that a few minutes' hike away from the vehicles the crowds disappeared, leaving us alone with the landscape. 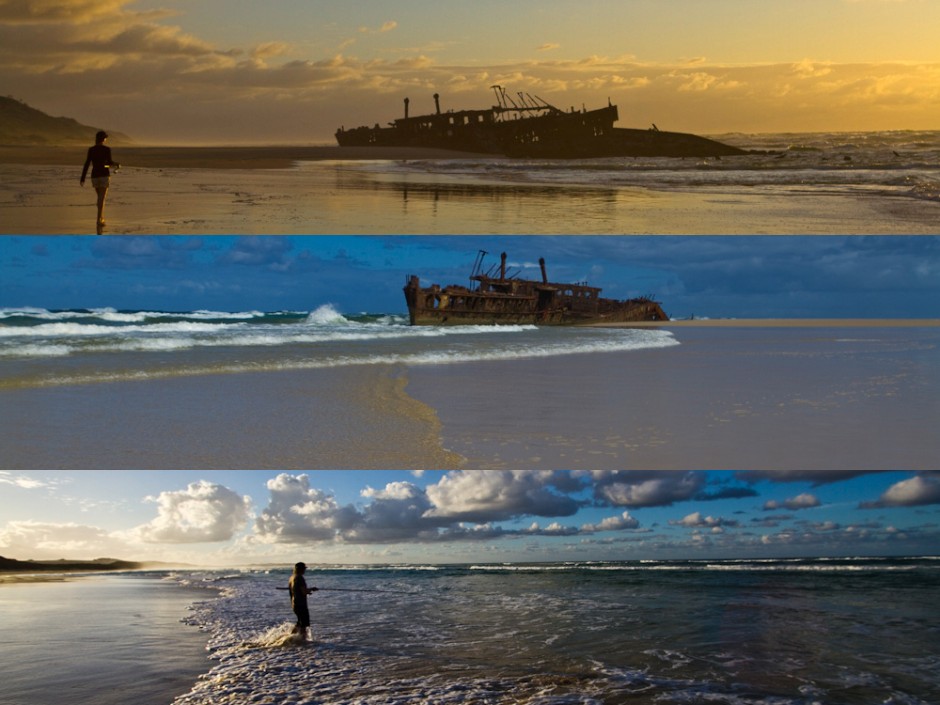 The shipwreck of the SS Maheno is one of the most popular sites on the island, and on most days would be packed with sightseeing buses and people fishing the surrounding gutters. After a few nights camped just down the beach, we found that for an hour or so right at sunrise and after sunset the people were gone and we had the place to ourselves. Shipwrecks always have a good story to tell, and every time I’ve been close to one my belief in ghosts is reaffirmed. 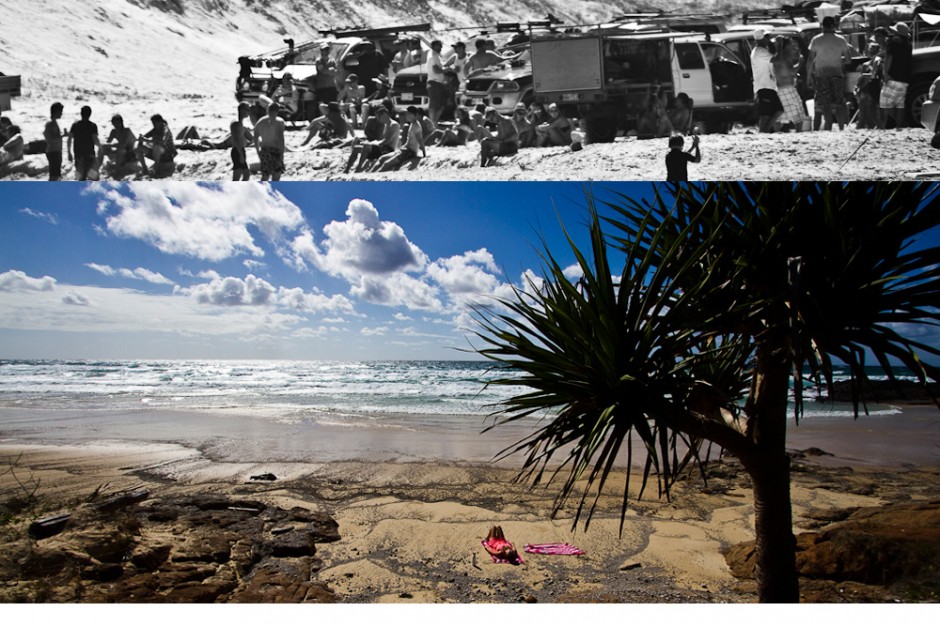 Two takes on the Fraser beaches. Eli Creek (top) in Spring Break mode. The crystal clear water of Eli Creek makes it a favorite of the backpacker tours, and on the ANZAC Day holiday it was a full-on party that would’ve made Huntington Beach proud. Contrast this with a midweek solo session at a remote beach in the northeast, with only the pandanus trees for company (bottom). I always find the best trips to be those that balance both the sacred and the profane. 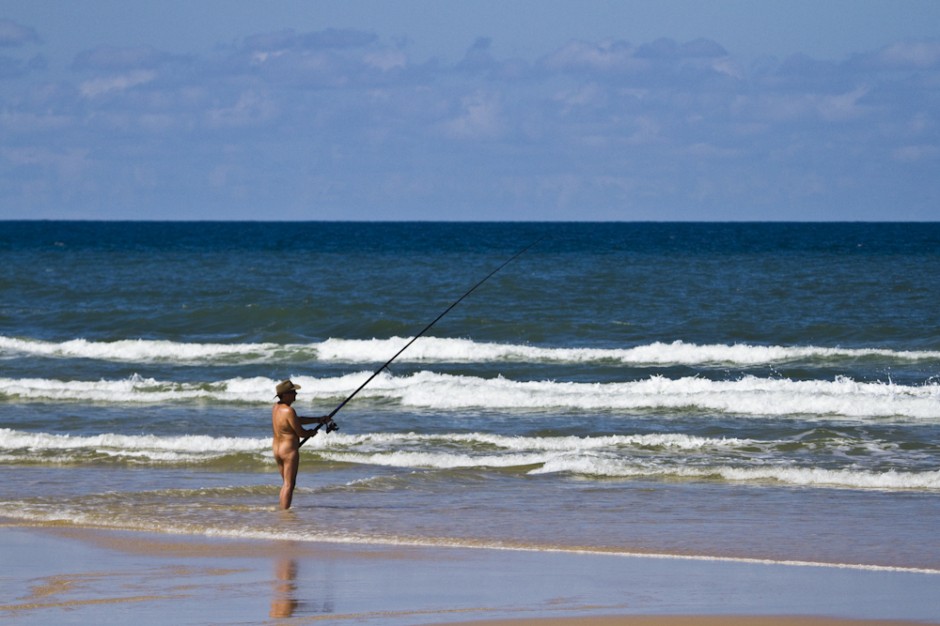 The entire eastern beach of Fraser Island, all 75 miles of it, is technically a nude beach…this guy was exercising his right and enjoying the hell out of it. Nice pole mate. 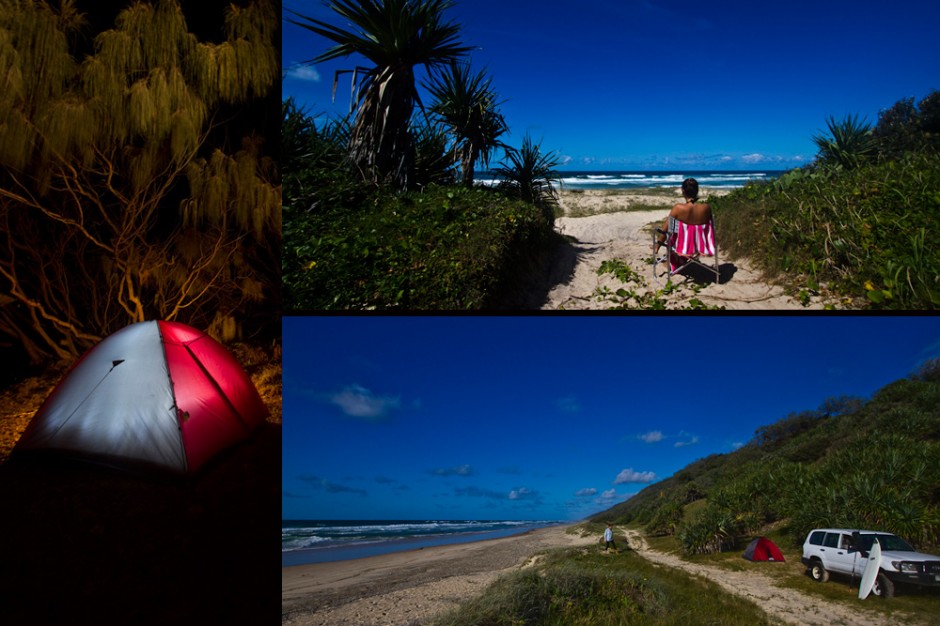 Camping on Fraser's eastern shore. There's something mystical about camping on a remote beach -- it always makes a place feel much more intimate, staying on after the sun has set, watching the stars wink on, sleeping to the sound of breaking waves and the dingo's howl. Rising with the morning sun and drinking coffee knowing you have nowhere to be but right here. 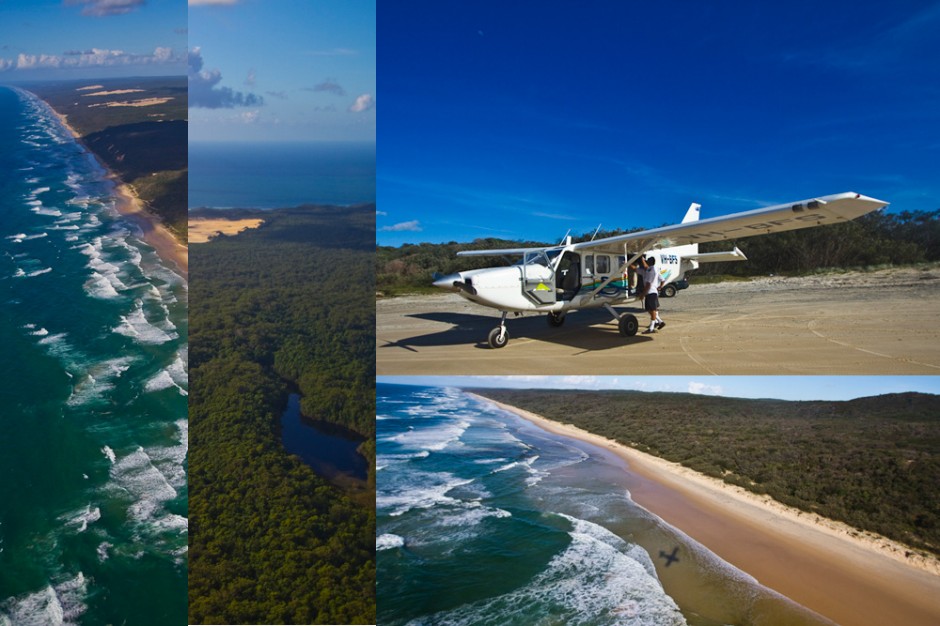 Fraser from the air

An aerial view of a place always lends a new perspective. The dense forests, wide open beaches, and surreal sand dunes all take on a new character when seen from a few thousand feet up. Getting into the air always reminds me how small we are in relation to the land and water that surrounds us. Big thanks to the boys at Air Fraser Island for an incredible and safe ride. 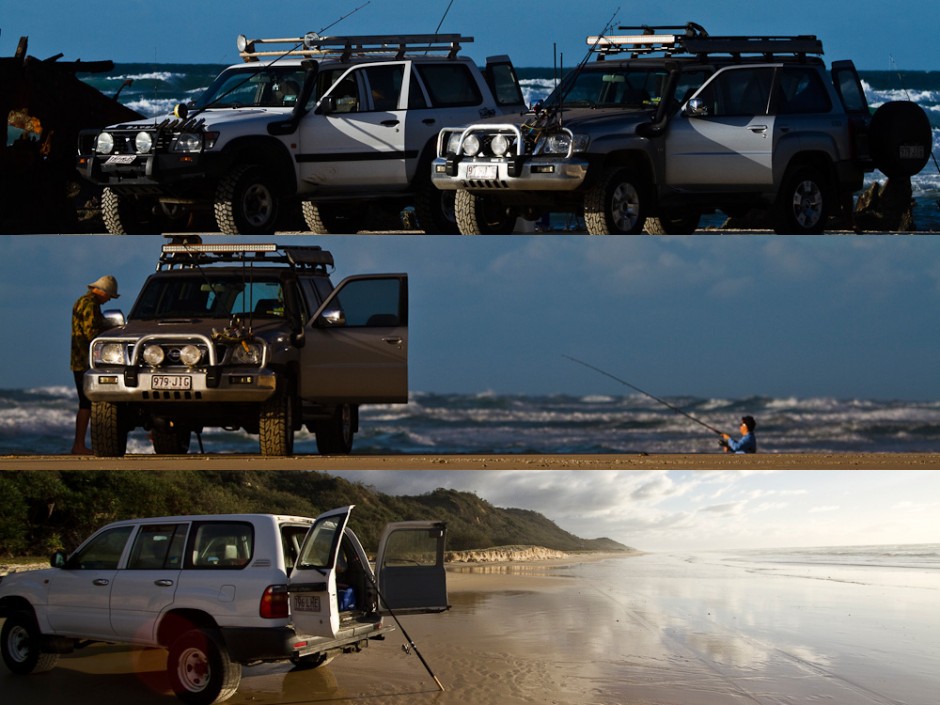 The "Ute" is an institution in Australia, and nowhere is this more on display than a busy weekend on Fraser Island. I became quite fond of our rented Land Cruiser courtesy of the good people at Aussie Trax (bottom), but everywhere we stopped there were custom rigs that seemed straight out of my daydreams. We fished with these guys early one morning, and I think I spent more time checking out the vehicles than throwing lures. 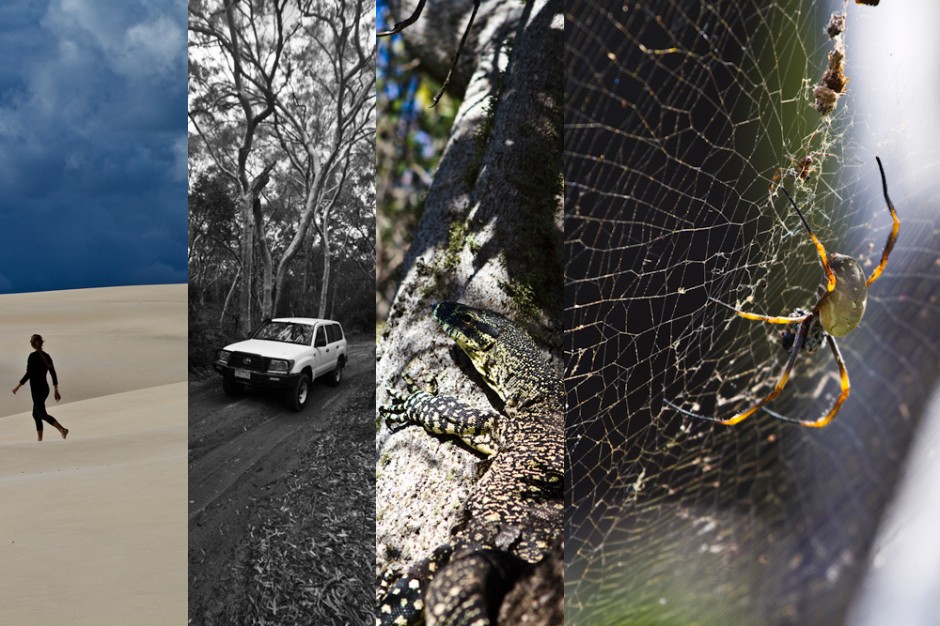 In the end, any trip becomes a collection of moments. From walking on sand dunes before an approaching storm, to rallying the Land Cruiser through some of the most beautiful 4WD tracks I’ve ever seen, to coming face to face with monitor lizards and massive spiders -- Fraser Island left us with memories and moments that will not soon be forgotten. 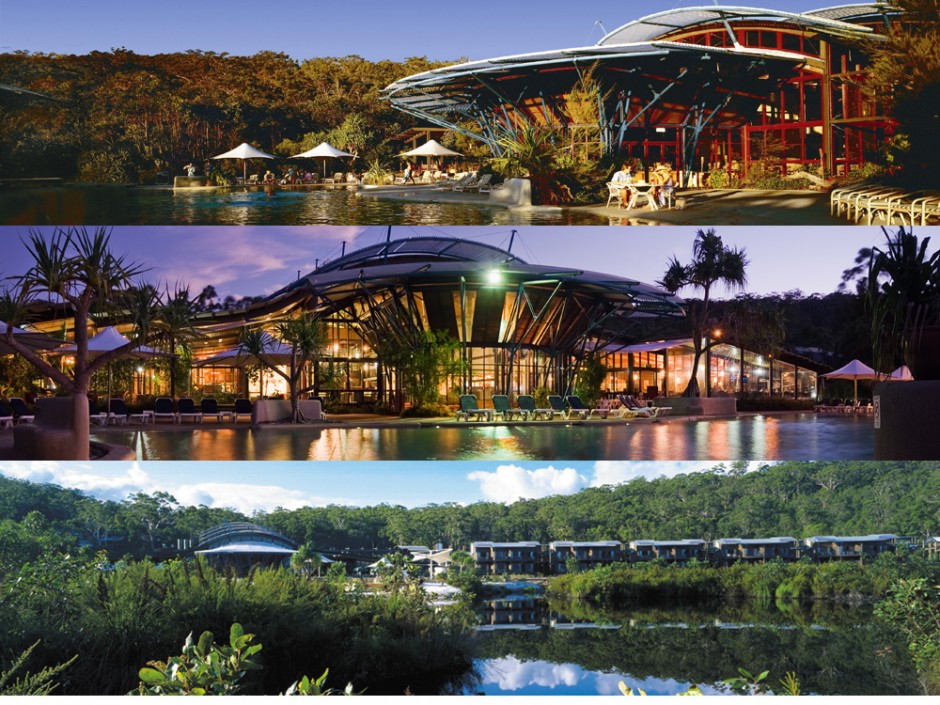 After nine nights camped in the sand, and one very wet night spent battling wind and rain in a cheap tent, rolling into the Kingfisher Bay Resort on Fraser’s western shore was akin to driving out of the wilderness and into a luxury fantasy…a fantasy that was very much appreciated by both Katie and me after spending the previous night in soaked sleeping bags. The food was delicious, the hospitality warm, the wine good, and a comfortable bed and hot shower made all the misery of the previous night melt away. The only downside was the internet access and cell service…on and ever onward it goes.
Photos above courtesy of Kingfisher Bay

This post is proudly produced in partnership with Tourism Queensland.
Tagged
Hiking Trip Planning Queensland: Adventure in the Sunshine State
What did you think of this story?
Meh
Good
Awesome
✖
travelstoke
Download the mobile app
stoked by